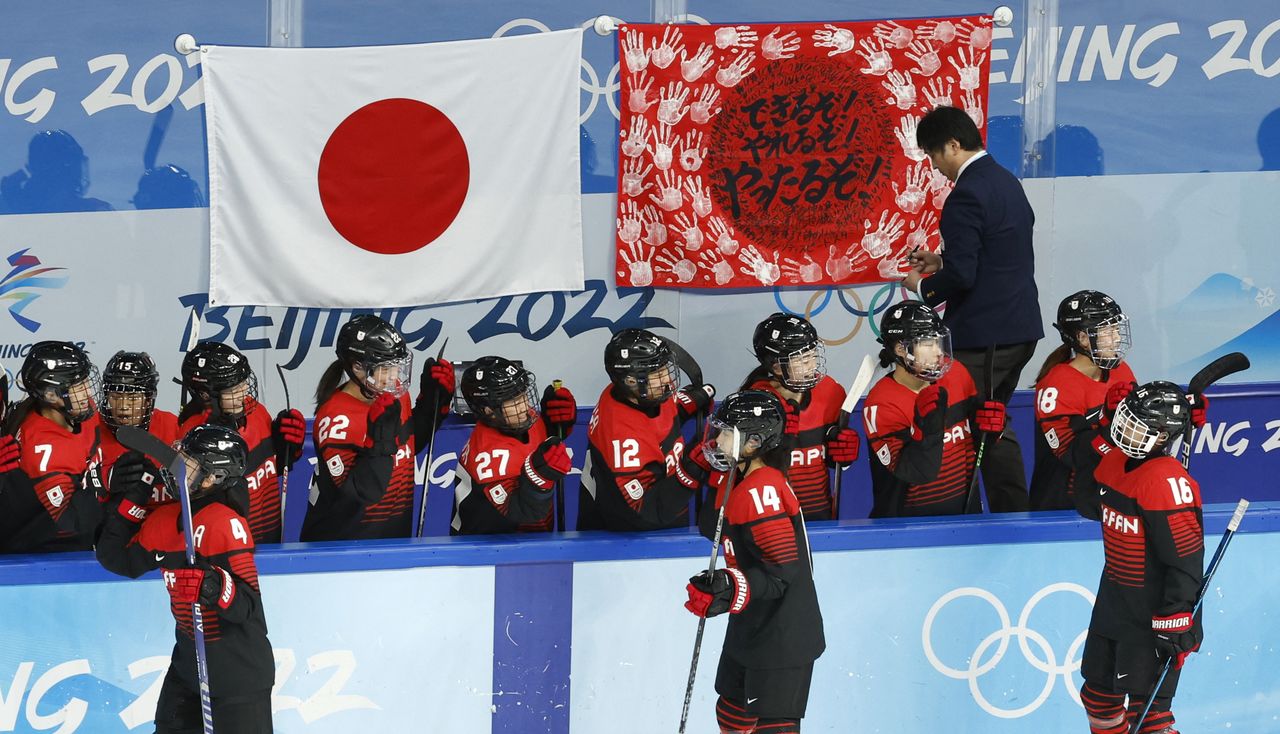 TOKYO (Reuters) - Not many years ago, members of Japan's women's ice hockey team were delivering pizzas to support themselves and keep their competition dreams alive.

But on Saturday they will take to the ice against Finland in the quarter-finals and make history as the first Japanese ice hockey team, men's or women's, to advance to the knockout round at the Olympics with their eyes firmly set on taking a medal.

"For us as a team, it's only one stage along our journey," defender Ayaka Toko, who, like a number of her teammates, also took part in the Sochi 2014 and Pyeongchang 2018 Games, told Japanese media after Tuesday's 3-2 win against the Czech Republic.

"We've been aiming at a medal these past four years and we're only at the start. We won't want to say 'we're close,' we want something tangible."

It's been a long road to this point for "Smile Japan", a nickname they gave themselves as encouragement during the qualifying process for Sochi.

First taking part at the 1998 Nagano Games due to host nation privileges, where they lost all five games, the team qualified for Sochi despite their sport being perpetually overshadowed by soccer and baseball in Japan.

Working odd jobs, such as delivering pizzas, was the only way team members could earn money and gain the flexible hours they needed to keep their Olympic dreams alive.

But after they qualified for Sochi, where they ultimately finished 7th, the Japanese Olympic Committee threw its weight behind them, helping all the players, except students, find full time work at companies and businesses willing to hire Olympians.

The team climbed still higher at Pyeongchang to finish 6th, where they claimed their first Olympic win - against a unified Korean hockey team consisting of players from both North and South Korea in a match rife with political and cultural overtones.

Long-term national rivalry between the Asian neighbours spilled over into the arena, with boisterous chants of "Let's Go Japan" being met with "Let's Win Korea" - and an explosion of cheers when Korea scored, though Japan claimed the game 4-1.

This time, their No.6 world ranking gained them an automatic qualification.

Though the Group B that Japan topped with its Tuesday win is comprised of lower seeds including Denmark and the Czech Republic, the team have for years far outshone their male Japanese counterparts - who last qualified for any Games in 1980, though as hosts they played in Nagano.

The long popularity of men's ice hockey in the northern hemisphere may work against Japan's men while modern ideas of gender parity likely help its women in a smaller competitive population, said Hirotaka Matsuoka, a sports marketing professor at Tokyo's Waseda University.

"Women's ice hockey has a smaller number of players than men's, and there are probably not as many countries that are focusing on improving their athletic level," he said.

Despite their success, "Smile Japan" still fights for attention in Japan. On Thursday, all eyes were focused on men's figure skating and the performance of double Olympic champion Yuzuru Hanyu, who ultimately finished fourth.