U.S. and allies tell citizens to leave Ukraine as Russia could invade 'at any time'

By Jeff Mason and Tom Balmforth

WASHINGTON/MOSCOW (Reuters) -The United States and its allies urged their citizens to leave Ukraine right away to avoid a Russian invasion, including a possible air assault, that Washington said on Friday could occur anytime.

Moscow accused Western nations of spreading lies to distract from their own aggressive acts.

The United States and Europe stepped up their warnings of an imminent attack while the Kremlin, jostling for more influence in post-Cold War Europe, rejected a joint EU-NATO diplomatic response to its demands to reduce tensions as disrespectful.

Russia has amassed more than 100,000 troops on the Ukraine border but denies it plans to invade.

U.S. officials, while pressing for diplomacy, said Russia could invade before the conclusion of the Winter Olympics on Feb. 20 and may seek to seize the capital Kyiv and other cities.

U.S. national security adviser Jake Sullivan said Americans could not expect military evacuation if they remained in Ukraine and should leave within 48 hours.

"We continue to see signs of Russian escalation, including new forces arriving at the Ukrainian border," Sullivan told reporters. "We are in the window when an invasion could begin at any time."

"If a Russian attack on Ukraine proceeds, it is likely to begin with aerial bombing and missile attacks that could obviously kill civilians without regard to their nationality," he said.

Australia and New Zealand became the latest countries to urge their citizens to leave as soon as possible, joining Britain, Japan, Latvia, Norway and the Netherlands. Israel said it was evacuating relatives of embassy staff.

Russia wants guarantees from the West, including a promise of no missile deployments near its borders, no NATO membership for Ukraine, and a scaling back of the alliance's military infrastructure.

The West describes Russia's main demands as "non-starters" but is willing to talk about arms control and confidence-building steps.

"Some reasonable people were hoping U.S.-fanned hysteria was waning," he posted on Twitter. "Maybe they put a jinx on it, because scaremongers have clearly got second wind. Our troops are still on our territory and I wonder if the U.S. will invade Ukraine itself - someone has to, after such a panic campaign."

The EU and NATO alliance delivered a joint reply to Russia this week on behalf of their member states as diplomatic efforts continue to try to diffuse the crisis.

Russia on Friday said it expected individual answers from each country, and called the collective response "a sign of diplomatic impoliteness and disrespect".

It later said that Western countries, with help from the media, were spreading false information about its intentions to try to distract attention from their own aggressive actions.

Washington will send 3,000 extra troops to Poland in coming days to try and help reassure NATO allies, four U.S. officials told Reuters. They are in addition to 8,500 already on alert for deployment to Europe if needed.

Biden told NBC News on Thursday that things in Ukraine "could go crazy quickly," and on Friday held a call about the crisis with the leaders of Britain, Canada, France, Germany, Poland and Romania, as well as the heads of NATO and the EU.

The leaders agreed to make coordinated efforts to deter Russian aggression, including by being ready to impose "massive consequences and severe economic costs" if it chose military escalation, the White House said after the call.

Washington also expressed concern that Russia and China were cooperating at the highest level, with a senior administration official saying on Saturday the two were "working to undermine us."

A partnership agreement between Moscow and Beijing shows they are in "fundamental alignment" that is growing closer, and a meeting between Putin and China's President Xi Jinping shows Beijing sees Moscow's moves regarding Ukraine as "legitimate," the official told reporters accompanying Blinken on a flight from Australia to Fiji.

Stocks extended declines, with the S&P 500 index down around 1.9%. Gold and oil prices rose. The rouble fell to its lowest level against the dollar since March 2020.

Moscow has said it could take unspecified "military-technical" action if its demands are not met. This week it launched joint military exercises in neighbouring Belarus and naval drills in the Black Sea.

Diplomatic efforts have so far failed to yield results.

Four-way talks in Berlin between Russia, Ukraine, Germany and France on Thursday made no progress.

Russia openly mocked British foreign minister Liz Truss when she visited on Thursday and there was no breakthrough after talks between Putin and Macron earlier in the week.

"I'm not going to speculate as to (Putin's) motivations, his intentions, or, at this point, his decisions," said Sullivan. "All I will say is that we are ready either way." 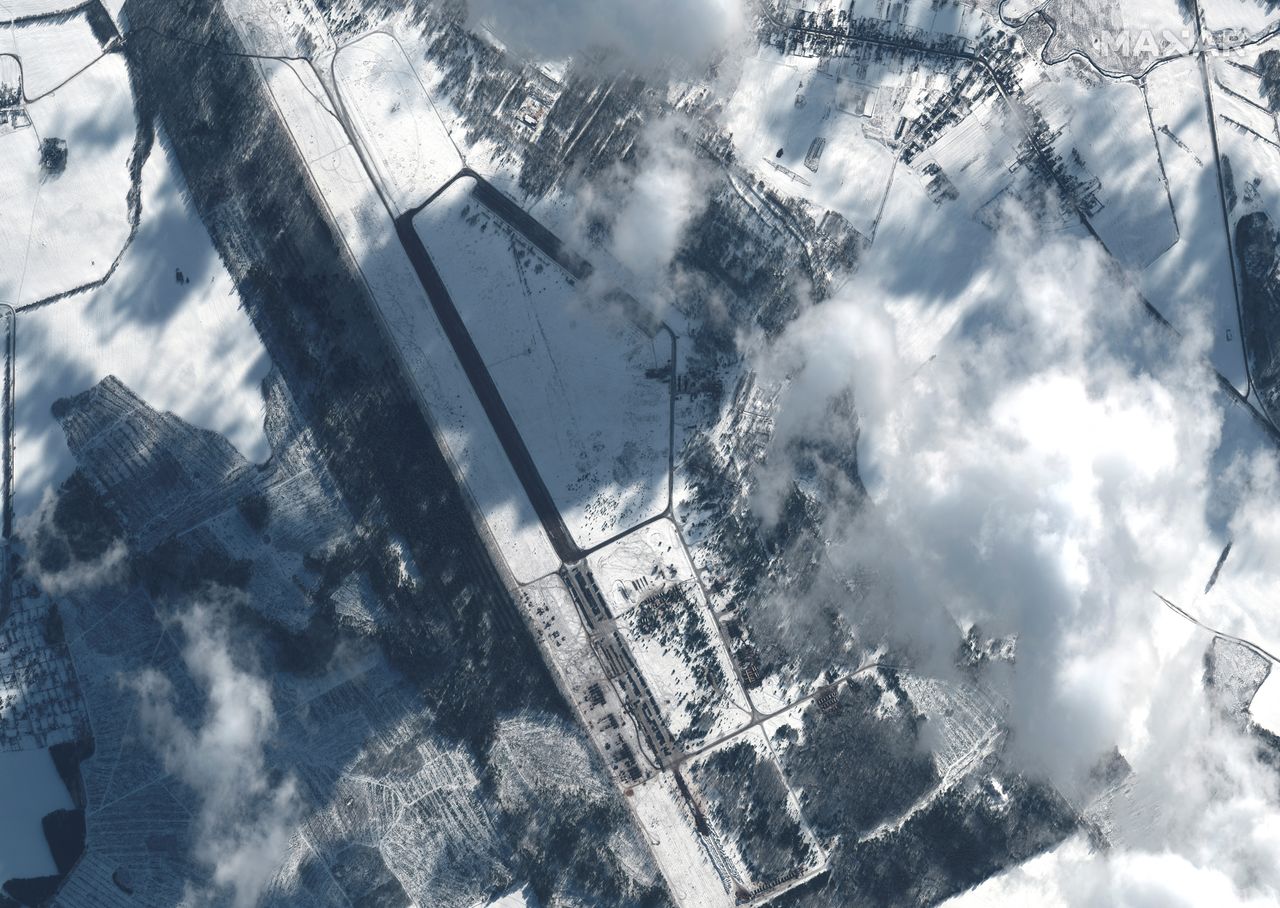 A satellite image shows an overview of Russian deployments at Zyabrovka air base in Belarus, February 10, 2022. 2022 Maxar Technologies/Handout via REUTERS 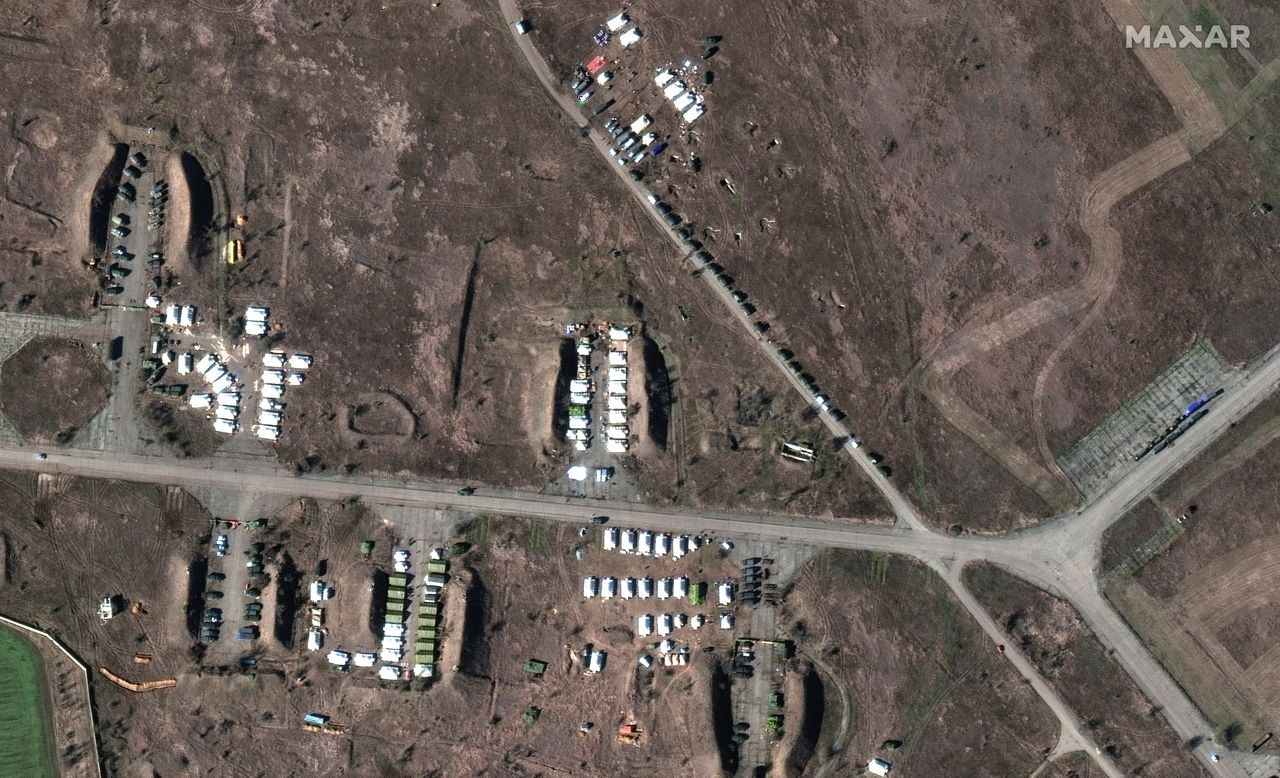 A satellite image shows a tent camp and equipment at the southern end of Oktyabrskoye air base, Crimea February 10, 2022. 2022 Maxar Technologies/Handout via REUTERS