AHMEDABAD, India (Reuters) - Hundreds of Hindu nationalist protesters marched in the Indian state of Gujarat on Saturday, prompting the closure of stores owned by several multinational companies caught up in a furore over social media posts supporting disputed Kashmir.

They were issued by the companies on Feb. 5 to coincide with Pakistan's Kashmir Solidarity Day, held annually to commemorate the sacrifices of Kashmiris struggling for self-determination, and caused anger among social media users in India.

"These companies cannot be doing business in India and at the same time supporting Pakistan's stand on Kashmir," Dinesh Navadiya, national treasurer of Hindu nationalist organisation Vishva Hindu Parishad (VHP), told Reuters during a protest in the city of Surat.

Shouting slogans such as "Kashmir is Ours" and wearing saffron scarves, more than 100 members of Bajrang Dal, another Hindu nationalist group, also joined the protest - one of several held in Gujarat, the home state of Prime Minister Narendra Modi.

Both the VHP and Bajrang Dal are linked to Modi's ruling Bhartiya Janata Party (BJP).

The furore has highlighted the risks faced by companies operating in India and arch rival Pakistan, which control parts of Kashmir but both claim the Himalayan territory in full.

India says Pakistan supports an armed insurrection against New Delhi's rule in India-controlled Kashmir that broke out in 1990. Pakistan denies the charge and says it only provides diplomatic and moral support for the Kashmiri people.

"We protested peacefully against these companies for the tweets by their Pakistani affiliates in support of Kashmir," said Hitendrasinh Rajput, spokesperson for the VHP's state unit in Gujarat's largest city of Ahmedabad.

"We want to make it clear to these companies and others that Kashmir is an inseparable part of India," Rajput said. 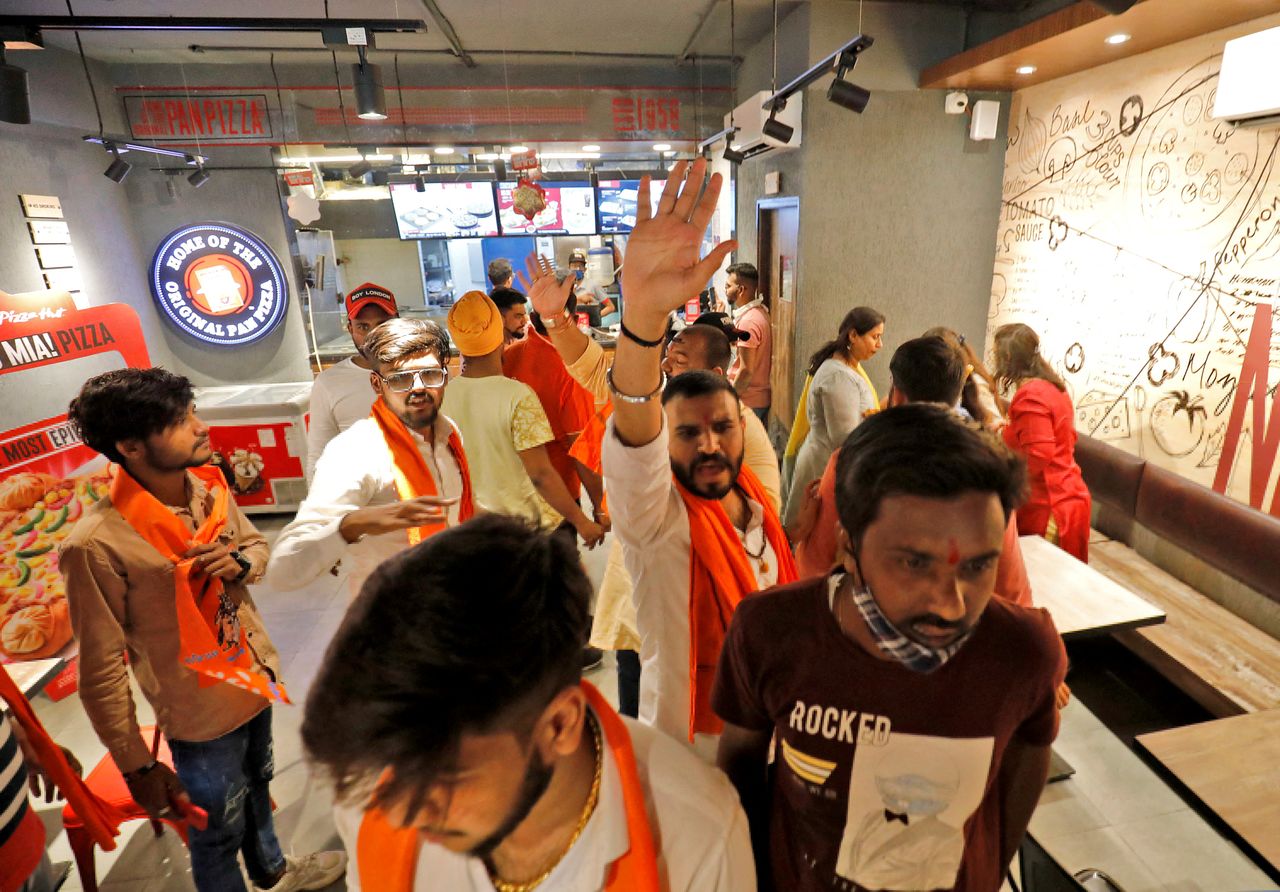 Activists of Bajrang Dal, a Hindu hardline group, shout slogans inside a Pizza Hut food outlet during a protest over their Pakistani partners' tweet in support of Kashmir, in Ahmedabad, India, February 12, 2022. REUTERS/Amit Dave 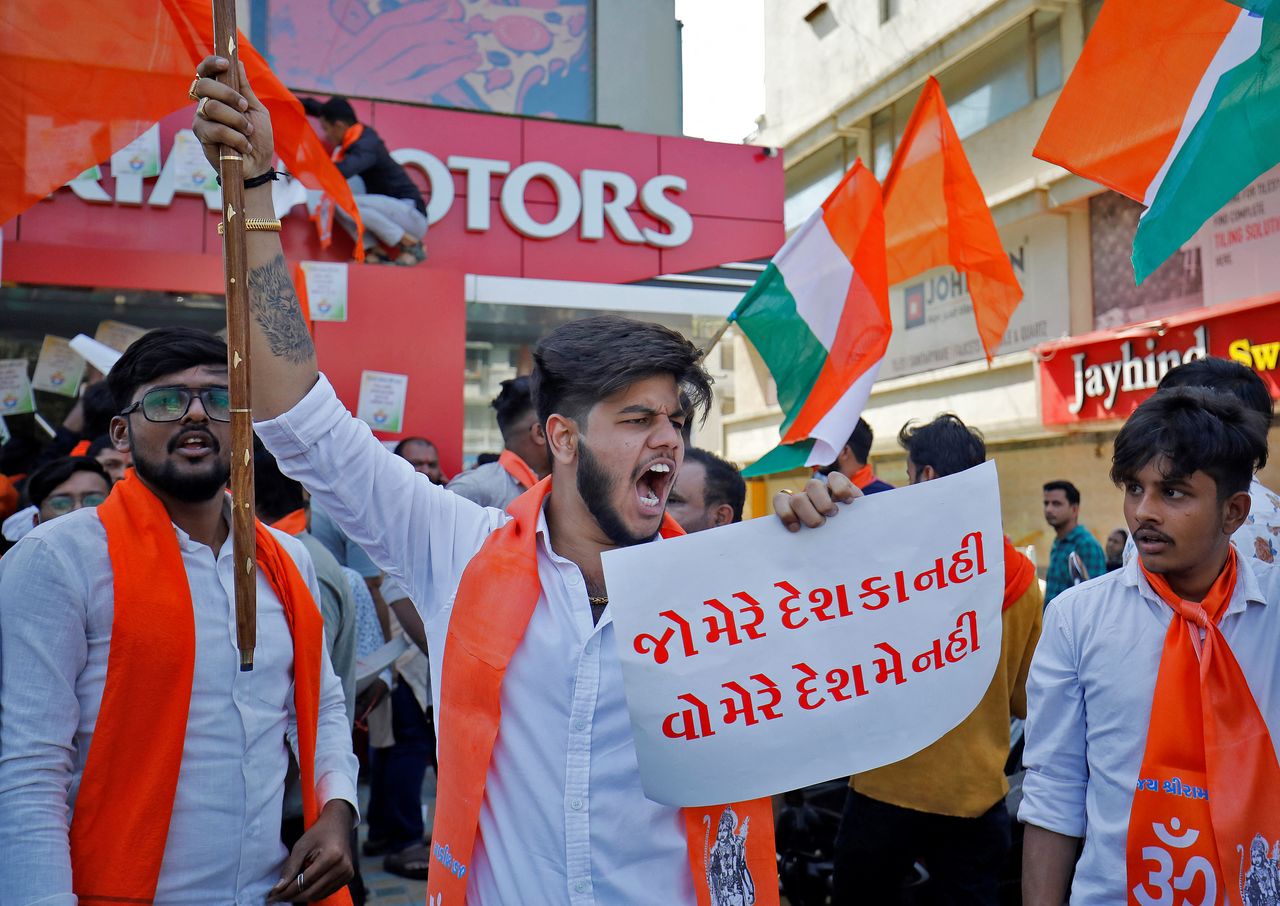 An activist of Bajrang Dal, a Hindu hardline group, shouts slogans in front of a KIA Motors showroom during a protest over their Pakistani partners' tweet in support of Kashmir, in Ahmedabad, India, February 12, 2022. The placard reads: "One who is not with my country, should not be in my country". REUTERS/Amit Dave 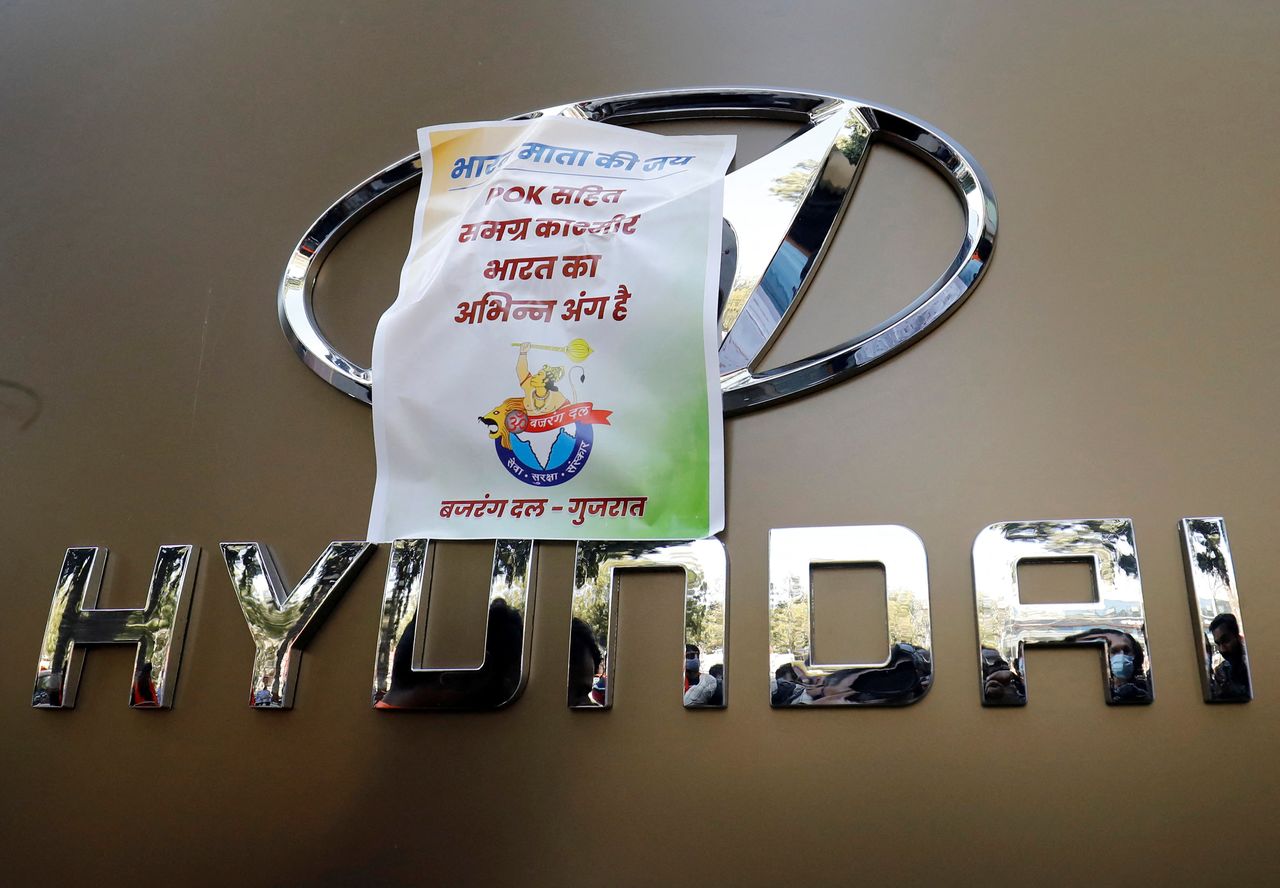 The logo of Hyundai is covered by a sticker pasted by the activists of Bajrang Dal, a Hindu hardline group, at a Hyundai showroom during a protest over their Pakistani partners' tweet in support of Kashmir, in Ahmedabad, India, February 12, 2022. The sticker reads: "Victory to Mother India. Entire Kashmir including POK is integral part of India". REUTERS/Amit Dave