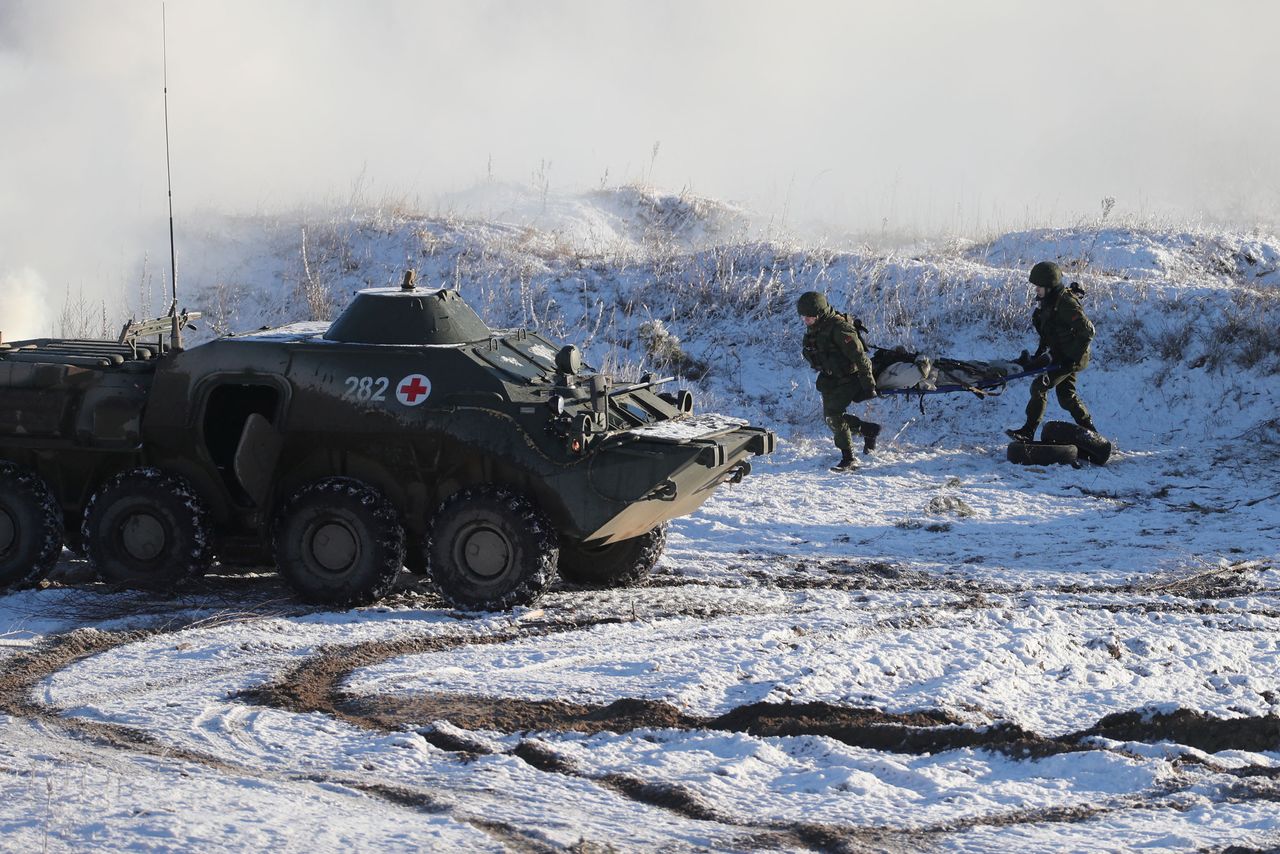 Service members take part in military exercises held by the armed forces of Russia and Belarus at the Gozhsky training ground in the Grodno region, Belarus, February 12, 2022. Leonid Scheglov/BelTA/Handout via REUTERS

By David Lawder and Pavel Polityuk

WASHINGTON/KYIV (Reuters) -Russia could invade Ukraine at any time and might create a surprise pretext for an attack, the United States said on Sunday, as it reaffirmed a pledge to defend "every inch" of NATO territory.

Russia has more than 100,000 troops massed near Ukraine, which is not part of the Atlantic military alliance, and Washington - while keeping open the diplomatic channels that have so far failed to ease the crisis - has repeatedly said an invasion is imminent.

Moscow denies any such plans and has accused the West of "hysteria".

German Chancellor Olaf Scholz, on the eve of a trip that takes him to Kyiv on Monday and Moscow for talks with President Vladimir Putin on Tuesday, called for Russia to de-escalate and warned of sanctions if Moscow did invade.

A German official said Berlin did not expect "concrete results https://www.reuters.com/world/europe/germany-hopes-putin-meet-will-yield-insight-into-his-aims-govt-source-2022-02-13" but diplomacy was important.

In what could amount to a major concession to Moscow, Ukraine's ambassador to Britain told the BBC Kyiv could drop its bid to join NATO to avoid war.

Ambassador Vadym Prystaiko was quoted as saying Ukraine was willing to be "flexible" over its goal to join the Atlantic military alliance.

"We might - especially being threatened like that, blackmailed by that, and pushed to it," Prystaiko was quoted as saying when asked if Kyiv could change its position on NATO membership.

"We cannot perfectly predict the day, but we have now been saying for some time that we are in the window," Sullivan told CNN.

U.S. officials said they could not confirm reports that U.S. intelligence indicated Russia planned to invade on Wednesday.

Sullivan said Washington would continue sharing what it learned with the world in order to deny Moscow the chance to stage a surprise "false flag" operation that could be a pretext for an attack.

It would also "defend every inch of NATO territory ... and Russia we think fully understands that message," Sullivan added in a separate CBS interview.

Biden spoke to his Ukrainian counterpart Volodymyr Zelenskiy on Sunday and they agreed on the importance of continuing to pursue diplomacy and deterrence in response to Russia’s military build-up, the White House said after the call.

Agreeing with the U.S. assessment that an invasion could happen "at any moment," a British government spokesperson said Britain was working on a package of military support and economic aid for Ukraine to be announced in coming days. Prime Minister Boris Johnson will make a trip to Europe later this week to build support to end the standoff with Russia.

Biden told Putin in a phone call https://www.reuters.com/world/biden-putin-speak-ukraine-warnings-mount-2022-02-12 on Saturday that the West would respond decisively to any invasion and such an attack would harm and isolate Moscow.

Ukrainian Defence Minister Oleksii Reznikov said on Twitter that Kyiv had so far received almost 1,500 tonnes of ammunition from allies delivered on 17 flights, including about 180 tonnes from the United States.

Canada's defense ministry said it has temporarily withdrawn its Ukraine-based military personnel to an undisclosed location in Europe. Canada, which is home to the world's third-largest Ukrainian population after Ukraine and Russia, has kept a 200-strong training mission in western Ukraine since 2015.

The Kremlin said Putin told Biden during their call on Saturday that Washington had failed to take Russia's main concerns into account, and that it had received no "substantial answer" on key elements of its security demands.

Putin wants guarantees from the United States and NATO that include blocking Ukraine's entry into NATO, refraining from missile deployments near Russia's borders and scaling back NATO's military infrastructure in Europe to 1997 levels.

Washington regards many of the proposals as non-starters but has pushed the Kremlin to discuss them jointly with Washington and its European allies.

"The diplomatic path remains open. The way for Moscow to show that it wants to pursue that path is simple," U.S. Secretary of State Anthony Blinken https://www.reuters.com/world/blinken-says-risk-russian-invasion-high-enough-justify-us-embassy-drawdown-2022-02-13 said after he held talks on Saturday with Asian allies.

Washington and its European allies and others have been scaling back or evacuating embassy staff and urging citizens to depart immediately or avoid travel to Ukraine.

U.S. staff at the Organisation for Security and Cooperation in Europe (OSCE) began leaving https://www.reuters.com/world/us/us-staff-osce-begins-pullout-donetsk-eastern-ukraine-2022-02-13 by car from the rebel-held city of Donetsk in east Ukraine on Sunday, a Reuters witness said.

The OSCE conducts operations in Ukraine including a civilian monitoring mission in Russian-backed, self-proclaimed separatist republics in the regions of Donetsk and Luhansk, where a war that began in 2014 has killed more than 14,000 people.

Ukraine said on Sunday it wanted talks with Russia and members of the OSCE within 48 hours to discuss Russia's military build-up. Ukrainian Foreign Minister Dmytro Kuleba said Moscow had not responded after Kyiv on Friday invoked a part of the Vienna Document, a set of security agreements, to demand Moscow explain its military activities.

Dutch carrier KLM said https://www.reuters.com/world/europe/ukraine-sees-no-point-closing-its-airspace-presidential-adviser-says-2022-02-13 it would stop flying to Ukraine and Germany's Lufthansa said it was considering suspending flights.

An adviser to Zelenskiy, Mykhailo Podolyak, said that regardless of what airlines chose to do Kyiv would not close its airspace as that would resemble "a kind of partial blockade".

A French presidency official said on Saturday, after President Emmanuel Macron spoke with Putin, that there were no indications from what the Russian leader said that Moscow was preparing an offensive, though Paris remained "extremely vigilant".

British defence minister Ben Wallace cautioned against putting too much hope in talks, telling The Sunday Times of London that there was "a whiff of Munich in the air from some in the West", referring to a 1938 pact that failed to halt German expansionism under Adolf Hitler.