YANQING, China (Reuters) - Valentine's Day is normally about personally delivered romantic gestures and passionate kisses but Olympians at the "closed-loop" Beijing Games have had to be creative to express their feelings of love in a restricted environment.

The thousands of athletes, staff and media who entered the COVID-19 protected bubble for the Olympics are expected to adhere to constant mask-wearing and social distancing as they are completely cut off from the outside world.

For Austrian snowboarders Sabine Schoeffmann, 29, and her partner Alexander Payer, 32, the compulsory daily testing for the virus has led to their second heartbreak Olympics.

After Schoeffmann missed the 2018 Pyeongchang Games due to injury, she returned a positive coronavirus test in Beijing and could not take part in her event. Payer had to spend the second Olympics in a row on his own as he competed and then went home.

"I most look forward to human touch when I get home," Schoeffmann said ahead of her Valentine's Day flight from Beijing to Milan, where Payer will pick her up after driving five hours from Austria.

Waiting for the second negative COVID-19 test to release her from the isolation hotel was "nerve wrecking", she added.

"Then somebody knocked on the door and the volunteer in charge of my case stood there in a white hazmat suit and told me I should get ready, the car is coming," Schoeffmann said.

SAY IT WITH FLOWERS

The events on ice at the Beijing Olympics are also positively teeming with couples.

Tim Koleto, 30-year-old American-born Japanese ice dancer who competed at the Olympics with his wife Misato Komatsubara, 29, said he bought some flowers to celebrate the holiday. "Luckily there is a florist here" in the "closed loop", said Koleto.

"It's very nice to know that as soon as I'm done with what I'm supposed to be doing here that I can just go and spend some time with her," said Diaz.

For Britain's speed skating couple Ellia Smeding, 23, and Cornelius Kersten, 27, who started a coffee business to fund their Olympic dreams, Valentine’s Day has been an afterthought.

Asked if anything was organised for the big day Smeding asked Kersten, "Well, did you have any special plans?” before the couple burst into laughter.

“I don’t think I actually realised that (it will be Valentine’s Day),” Smeding said. “No, until you said it I completely forgot about it,” Kersten added.

The couple will have to get creative to find ways of celebrating the day romantically at the Athletes' Village.

“We’ll have to do a KFC date... It’s the only thing we could really do at the village - we’ll have KFC or pizza,” Smeding said.

“Yeah, maybe we’ll go and get a romantic haircut together,” Kersten joked.

In the skeleton, Brazilian racer Nicole Rocha Silveira, 27, has been dating, and competing against, Belgium's Kim Meylemans, 25. They met three years ago when Silveira was volunteering at a World Cup event in which the Belgian was racing.

"I’m travelling on the 14th back home so this year unfortunately we’re going to be spending it (Valentine's Day) apart... I’m slightly hoping, don’t tell anyone, it gets cancelled," Silveira said of her flight.

American ice dancers Kaitlin Hawayek, 25, and Jean-Luc Baker, 28, were thinking about their pets on the day of love.

"We both have dogs," said Baker. "Neither of us have partners," Hawayek said. "We wish we had our dogs here."

New Zealand snowboarder Tiarn Collins, 22, has had to take a more practical approach to romance this year.

When asked who was on his mind on Valentine's Day, he said it was hard with social distancing and masks, adding: "Hopefully I can get a bunch of fan girls." 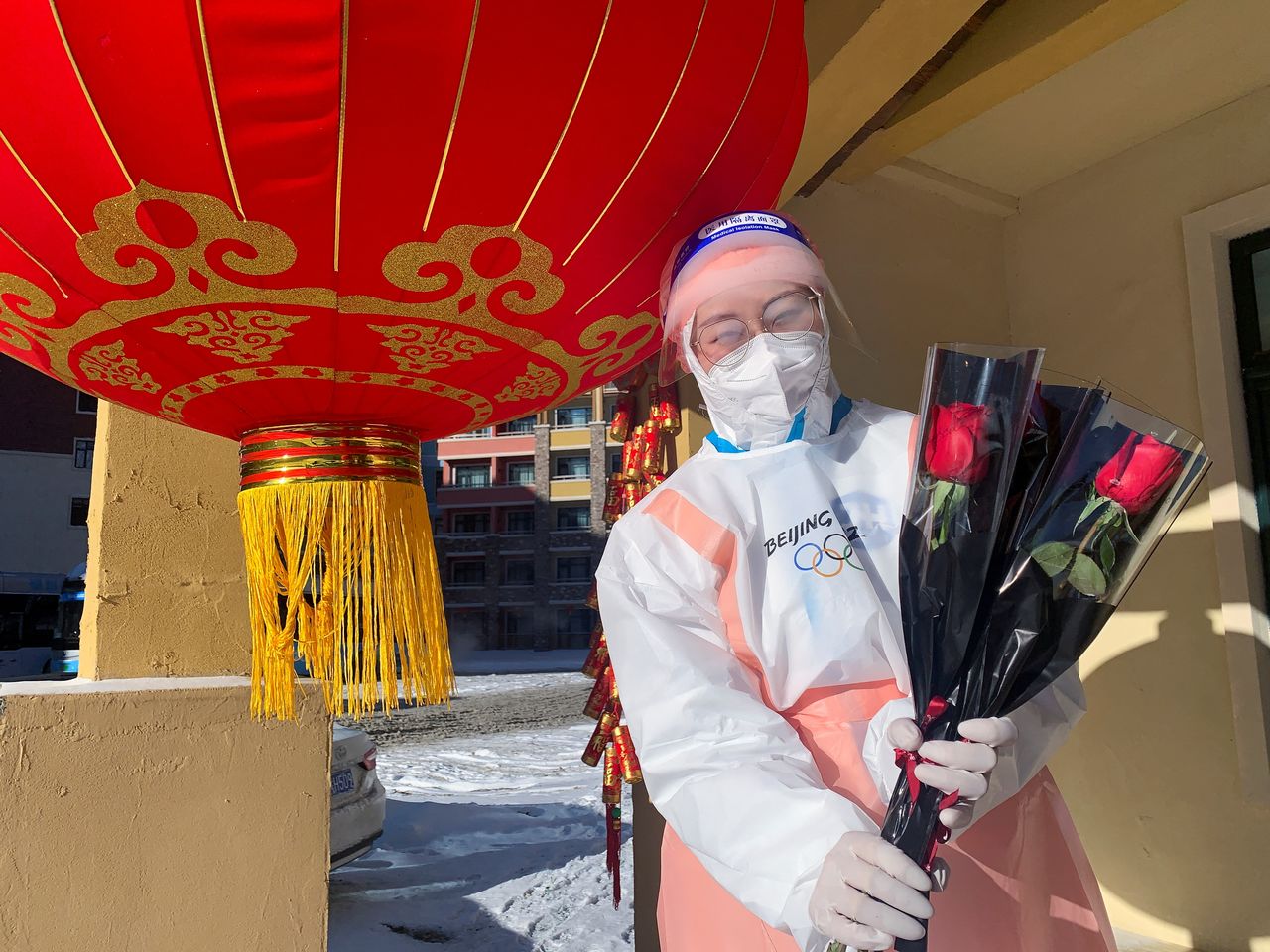 Beijing 2022 Winter Olympics volunteer Stella poses with single red roses as she hands them out to journalists and personnel leaving a 'closed loop' hotel on Valentine's Day, in the Thaiwoo ski resort in Zhangjiakou, China, February 14, 2022. REUTERS/Emily Roe 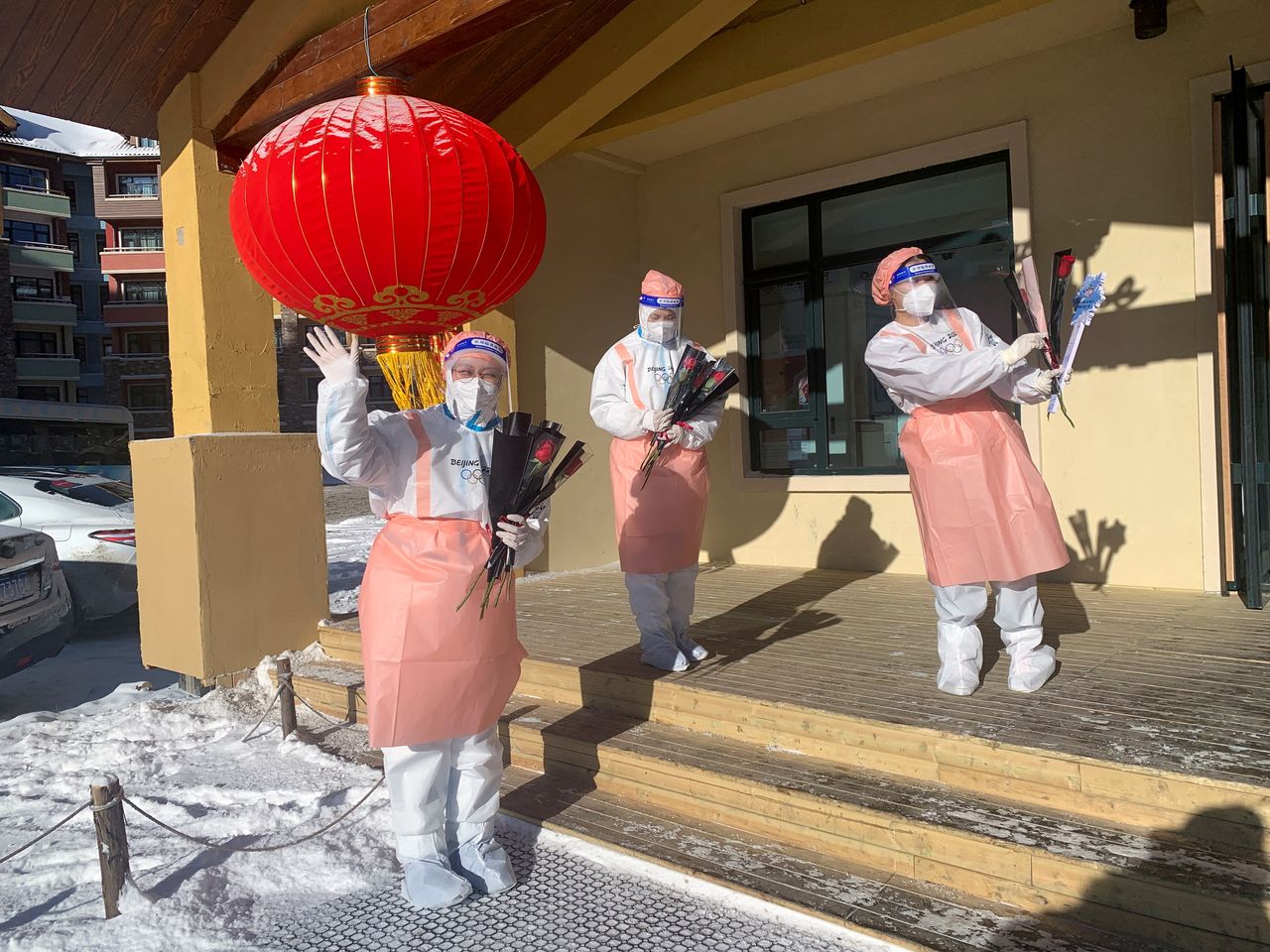 Beijing 2022 Winter Olympics volunteers pose with single red roses as they hand them out to journalists and personnel leaving a 'closed loop' hotel on Valentine's Day, in the Thaiwoo ski resort in Zhangjiakou, China, February 14, 2022. REUTERS/Emily Roe 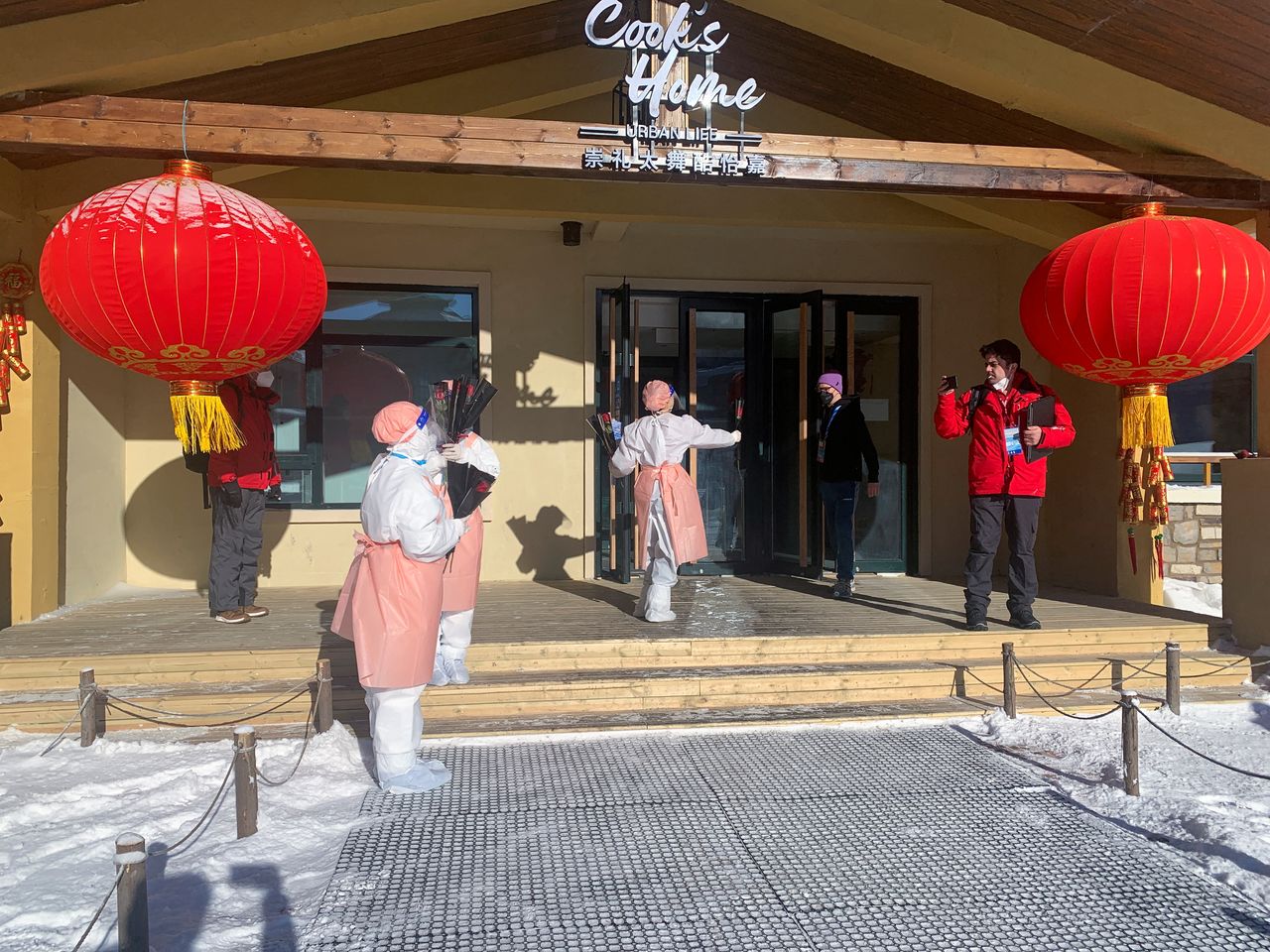