By Muyu Xu and Tony Munroe

BEIJING (Reuters) - The mascot Bing Dwen Dwen has been an unexpected star of the Beijing Olympics but the roly-poly panda's fame may prove fleeting after the Feb. 20 closing ceremony.

Bing Dwen Dwen, which translates to "Ice Panda", made little splash when introduced about two-and-a-half years ago, eliciting a collective yawn from social media over yet another panda character for a big Chinese event.

It was propelled to stardom on Feb. 2, when Japanese television journalist Gido Tsujioka showed Bing Dwen Dwen-themed items during a broadcast, a clip of which went viral.

Related topic views that day reached 300 million on China's Weibo social media platform, from 760,164 a day earlier. They doubled again on Feb. 4, the day of the Olympics opening ceremony, and have averaged 400 million since.

Games organisers were caught unprepared, with thousands of fans lining up in sub-freezing temperatures to buy merchandise - from magnets and key chains to bags and stuffed toys - and factories scrambling to make more.

Chinese media fuelled the frenzy, showing footage of soldiers marching in front of a Bing Dwen Dwen figure at the base of Mount Everest, while an officially licensed store was selling a limited edition version encrusted in fake diamonds for 2,022 yuan ($315).

Many people wrote online that queuing up for and buying the merchandise is their way of engaging with the Games. Because of COVID-19, no ordinary spectators have been allowed to watch the sports and the torch relay was shortened to three days and off-limits to spectators.

Bing Dwen Dwen's turn in the spotlight has not been without incident.

State broadcaster CCTV was criticised on social media after a male reporter conducted an interview in a Bing Dwen Dwen suit. Weibo users complained that it ruined the mascot's cuteness by speaking and violated the International Olympic Committee's guideline that mascots are gender neutral. The segment was later removed from the broadcaster's website.

Scalpers were punished for selling merchandise at inflated prices and on Monday, the China Youth Daily reported that a woman selling pirated Bing Dwen Dwen merchandise was jailed for a year and fined 40,000 yuan.

While scarcity has contributed to Bing Dwen Dwen's appeal, organisers have promised to boost supplies. Reports on Sunday of new merchandise arriving in Beijing led to speculation the frenzy would soon cool.

"I don't know how long Bing Dwen Dwen can maintain its fame. I cannot get one now, but I guess it will soon be two-for-one once it's over the hill," one person wrote. 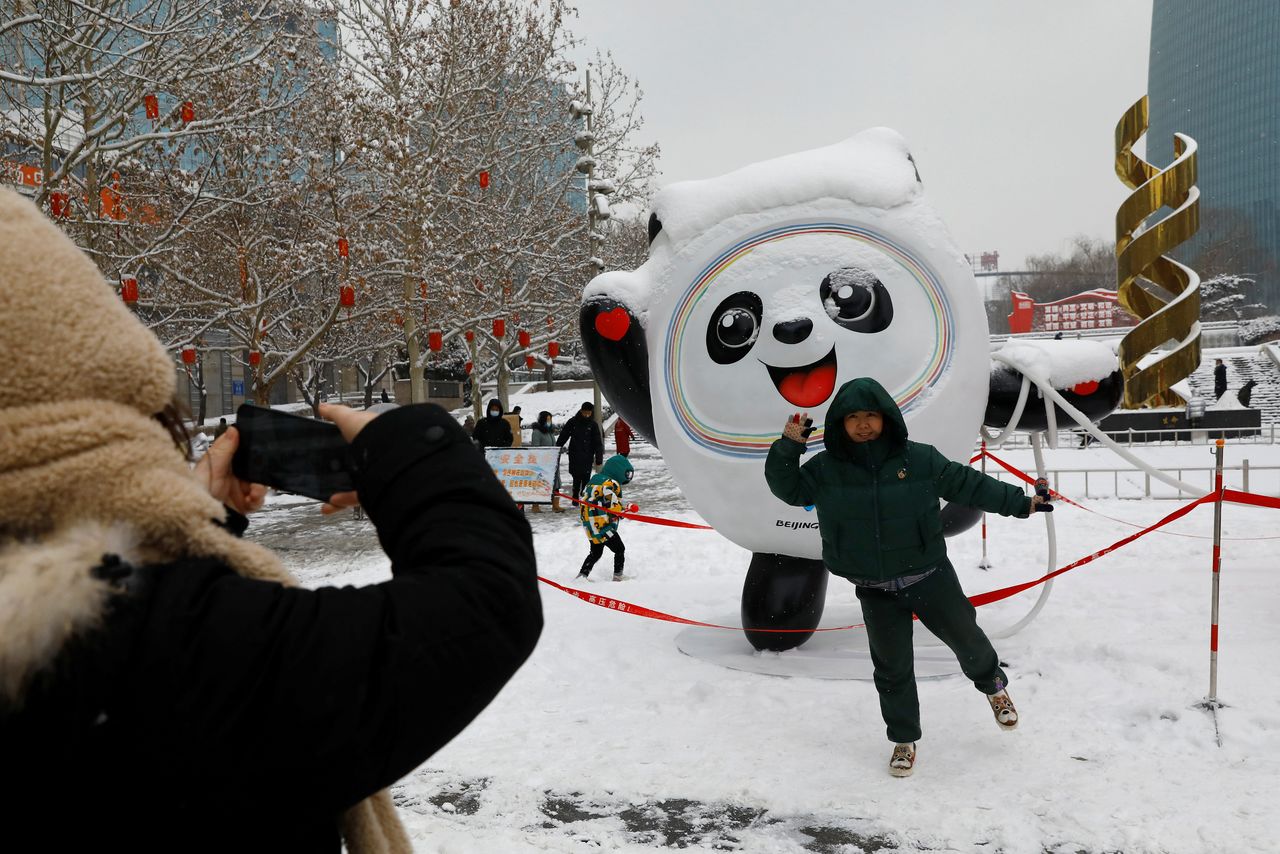 A person poses for pictures in front of an installation featuring Bing Dwen Dwen, the Beijing 2022 Winter Olympic Mascot amidst a snowfall on a street in Beijing, China February 13, 2022. REUTERS/Tingshu Wang 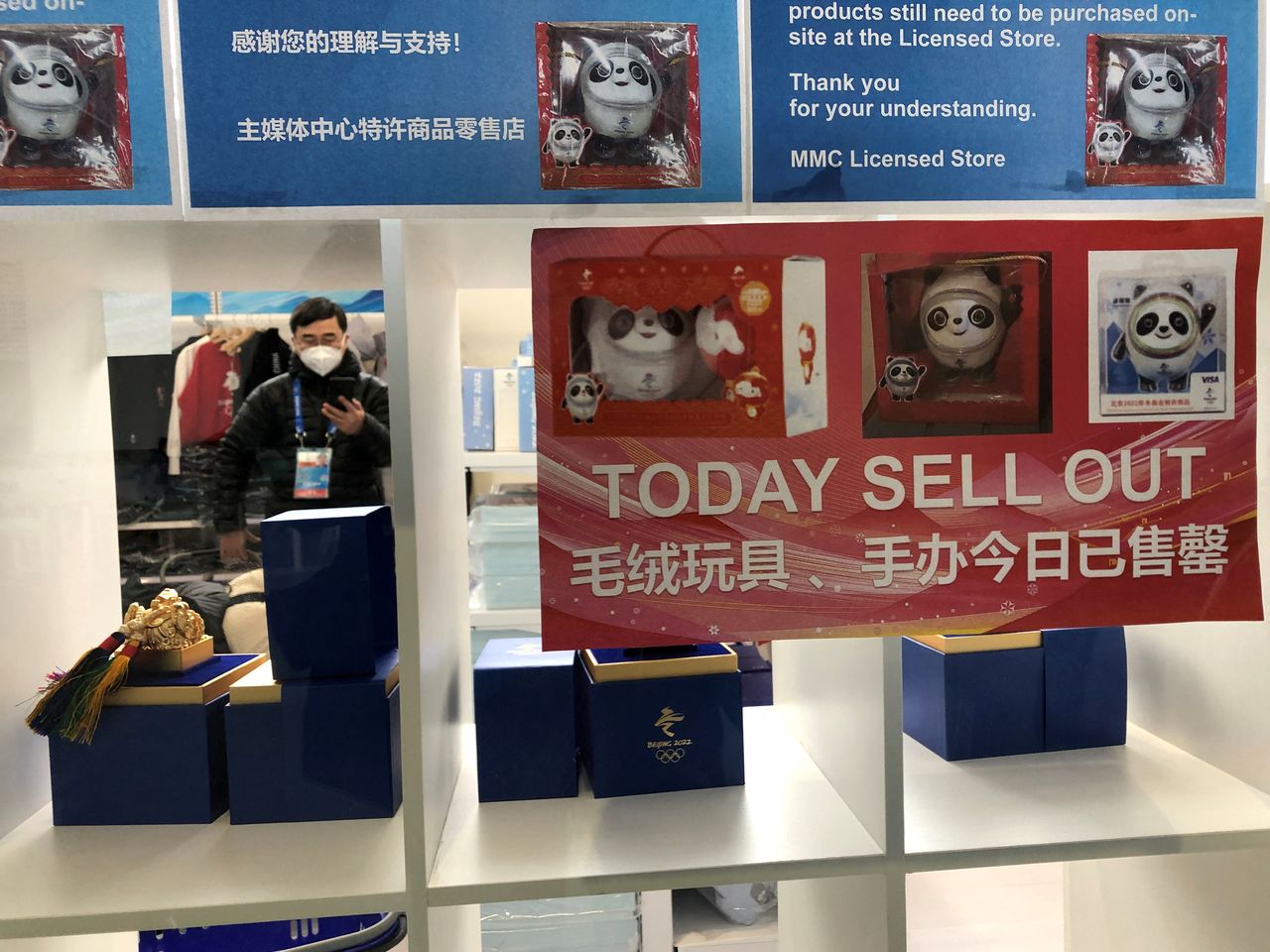 A sign shows a sell out on the Bing Dwen Dwen mascot merchandise, at the 2022 Beijing Olympics media center in Beijing, China, February 13, 2022. REUTERS/Jonathan Ernst 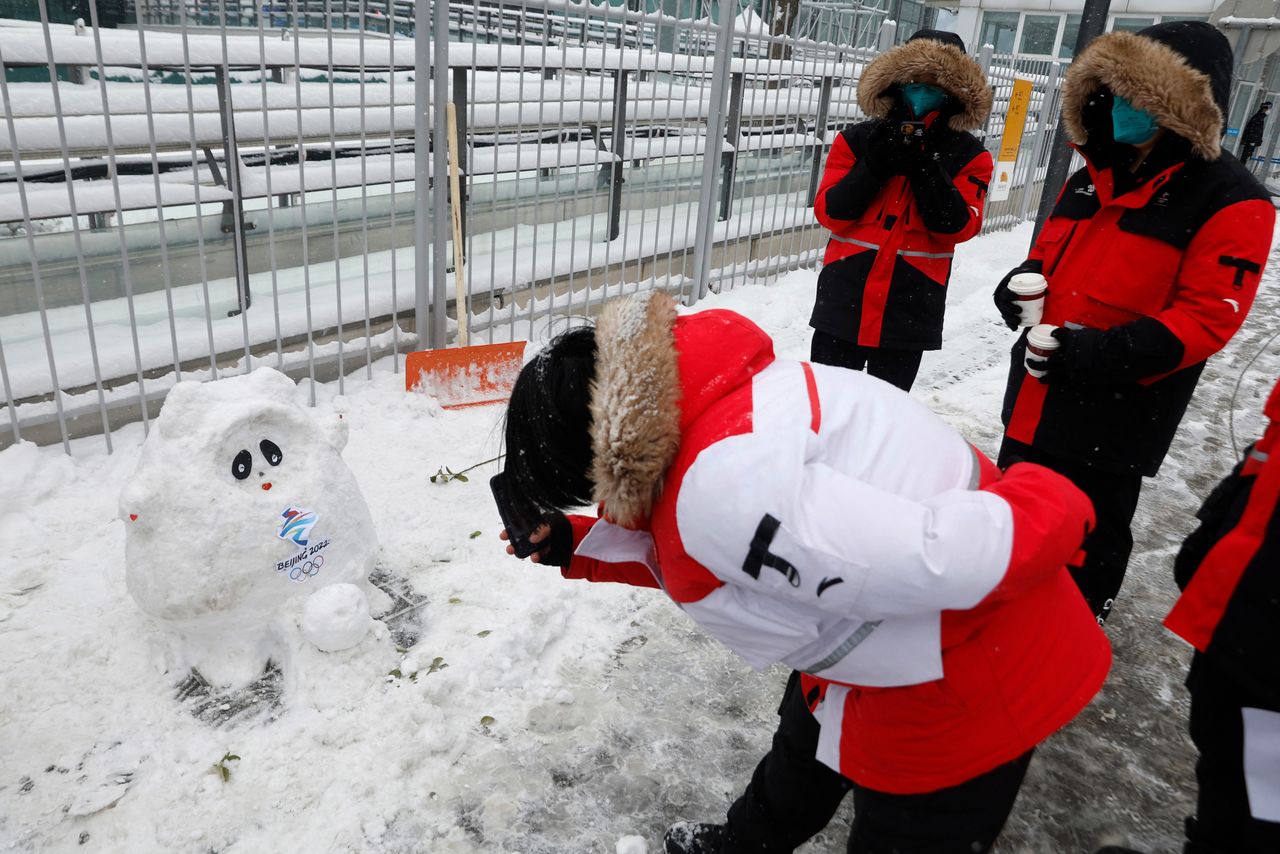 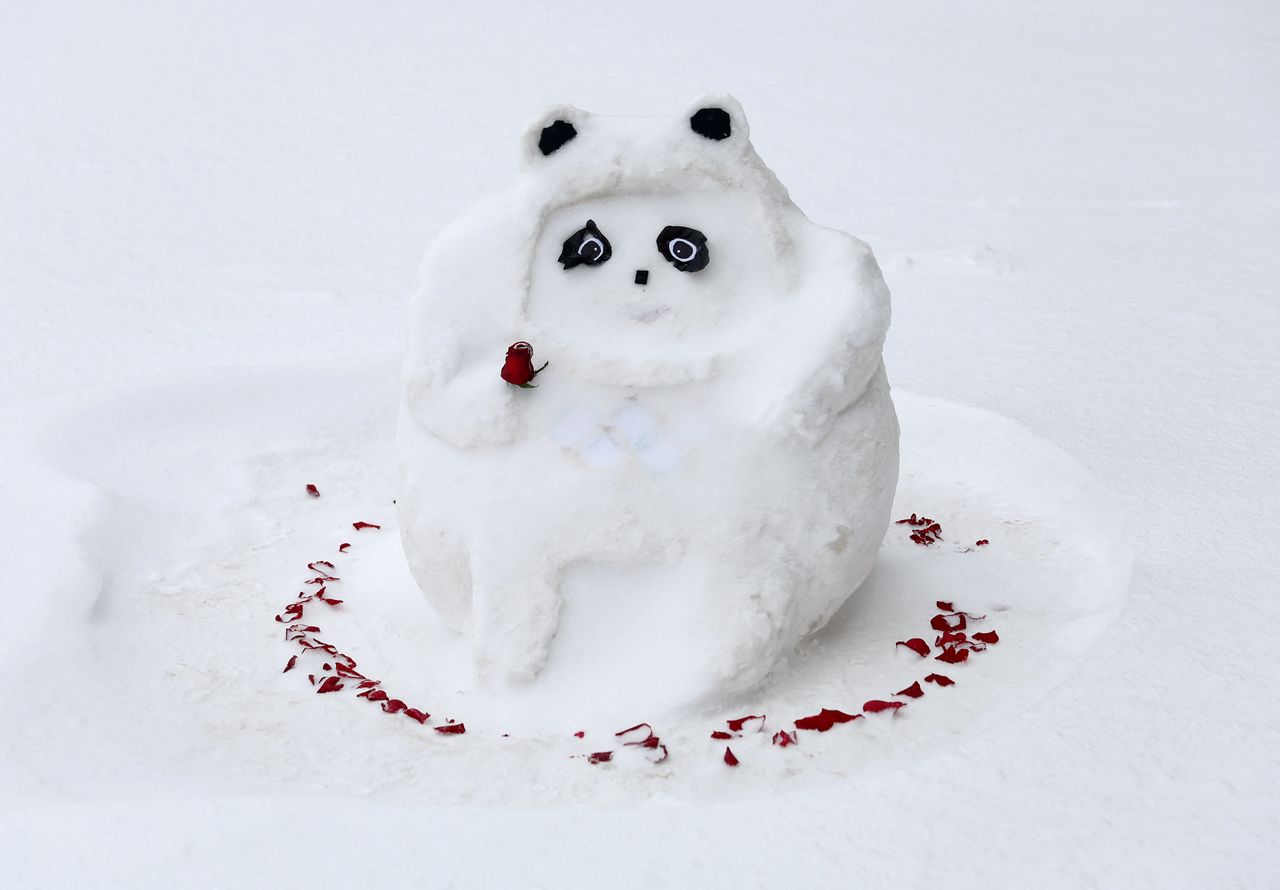 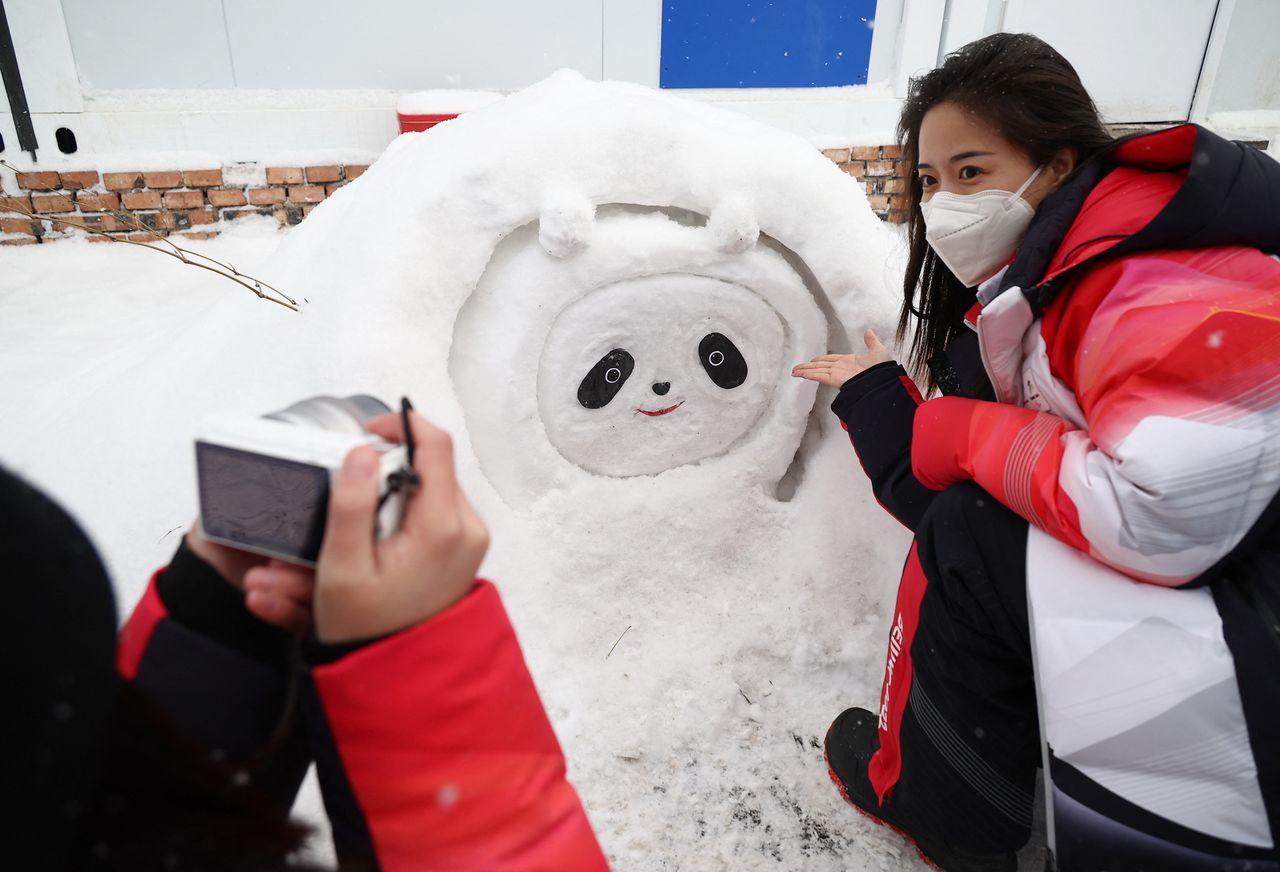