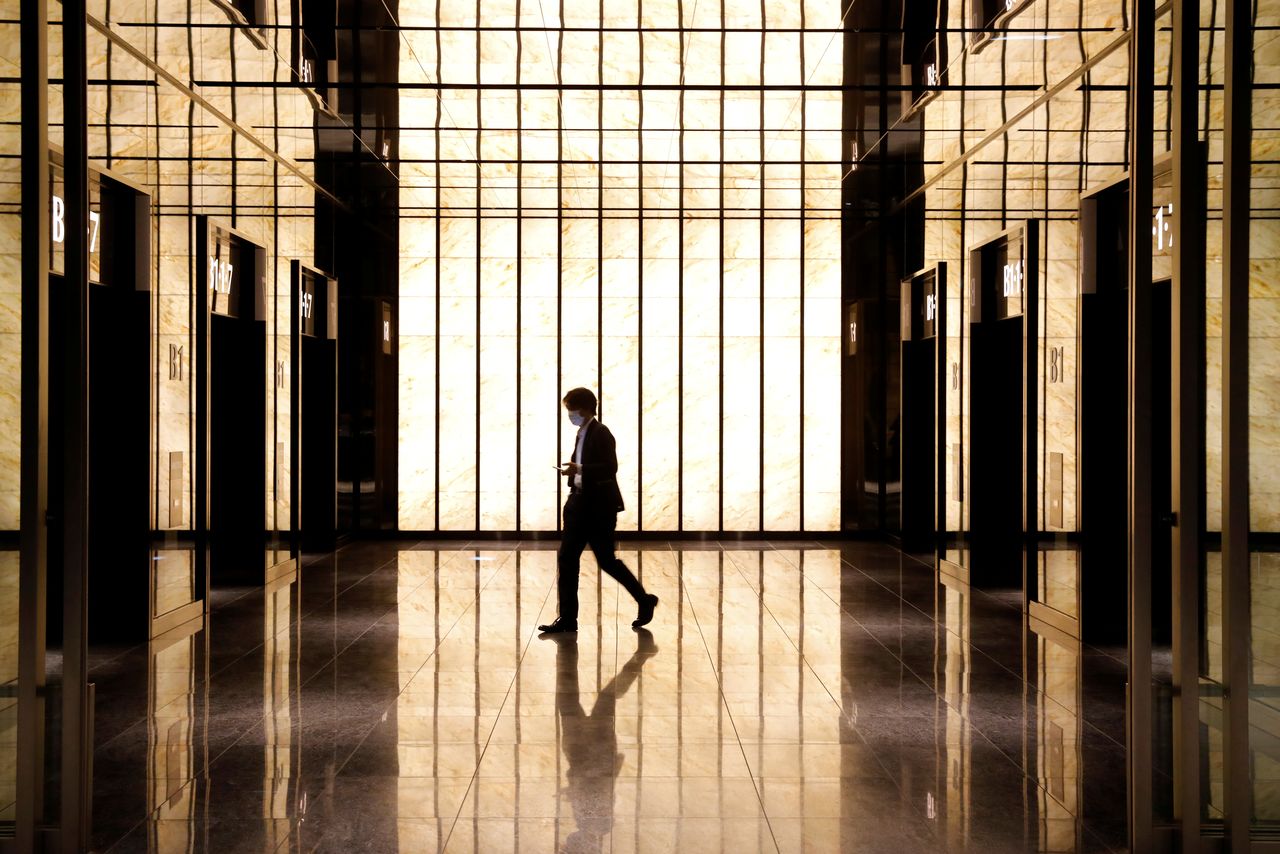 A man wearing a protective face mask walks in an office building at a quiet business district on the first working day after the Golden Week holiday, following the coronavirus disease (COVID-19) outbreak, in Tokyo, Japan, May 7,2020.REUTERS/Kim Kyung-Hoon

TOKYO (Reuters) - More than two-thirds of Japanese firms don't plan to raise base salaries at this year's labour talks, a Reuters poll showed, with pay increases more likely to come from one-time bonuses that may not kickstart household spending.

A slim majority of firms said they would raise the total amount they pay workers this year, including bonuses, as corporate earnings rebound from the worst period of the COVID-19 pandemic. A full 39% said the increases would be between 1-3%.

The survey goes some way to show why wages remain one of the most vexing problems for the world's no.3 economy, where policymakers want to see a virtuous cycle of higher wages and domestic consumption.

After years of deflation, companies remain wary of increasing base salaries, which become permanent. Instead, companies use discretionary bonuses - paying out more when times are good and cutting back in a downturn. As a result households often hoard cash for a rainy day.

With surging oil and global commodity inflation driving up the cost of living, the government is pressing companies to raise wages. Prime Minister Fumio Kishida has called for a "new capitalism" that includes a greater distribution of wealth.

"We will avoid base pay hikes, which will increase fixed costs over time," a manager of a machinery maker wrote in the Feb 1-10 survey of some 500 big and midsize Japanese non-financial companies. Roughly half responded on condition of anonymity.

"In view of recent price hikes, we are raising pay, which is vital for lifting employee morale," wrote one manager at a ceramics maker, saying earnings "turned out solid".

This year, Japan's biggest business lobby Keidanren has urged companies to raise wages, although it has brushed aside Kishida's call for uniform pay hikes of 3% or more for profitable firms, given the uneven nature of the recovery.

Most economists surveyed in a separate Reuters poll reckoned Kishida's wage policies were unlikely to trigger a virtuous growth cycle.

The Reuters corporate survey in December also showed a slim majority of firms expecting to increase total pay, including bonuses.

A slim majority of firms voiced a concern about rising long-term rates, with 40% saying they can tolerate rate rises of up to 0.25% and another 40% seeing 0.5% can be tolerated.

Against the backdrop of global inflation, the benchmark 10-year Japanese government bond (JGB) yield hit 0.23% last week, the highest since 2016 and near the implicit 0.25% cap the BOJ set around its target of 0%.

"It would be desirable for inflation to entail a pay increase. But the current price hikes under low growth are undesirable," wrote a transport company manager.

Several others expressed concern that Japan may fall into stagflation - a combination of low growth and high inflation.

Still, those who were concerned the world's third largest economy may slide back into deflation outweighed those worried about rising inflation, the survey showed.