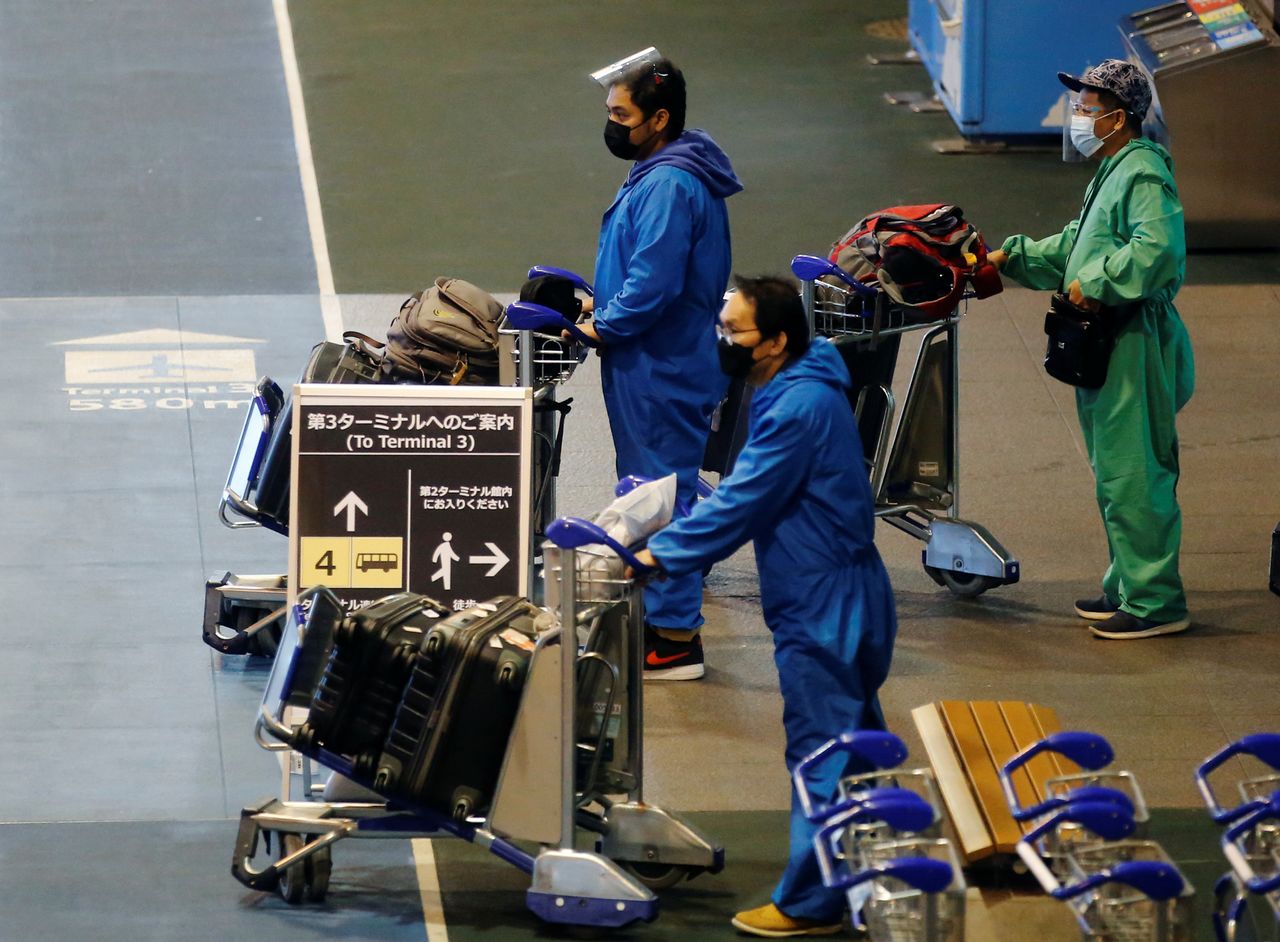 Men wearing protective suits make their way at a bus stop at Narita international airport on the first day of closed borders to prevent the spread of the new coronavirus Omicron variant amid the coronavirus disease (COVID-19) pandemic in Narita, east of Tokyo, Japan, November 30, 2021. REUTERS/Kim Kyung-Hoon

By Elaine Lies and Kiyoshi Takenaka

TOKYO (Reuters) -Japan will ease border controls imposed to counter the pandemic, Prime Minister Fumio Kishida said on Thursday, softening measures that have been among the strictest imposed by wealthy nations and have been slammed by business and educators.

About 150,000 foreign students have been kept out of Japan, along with workers desperately needed by an ageing nation with a shrinking population, prompting warnings of labour shortages and damage to its international reputation.

From March, authorities will raise the number of people allowed to enter to 5,000 a day, from 3,500 now, Kishida told a news conference.

"We will permit the entrance of foreigners except for tourists," he said. Measures would be eased gradually and depend on a number of conditions, including the infection rates in other nations, Kishida said.

The period of mandatory quarantine will be reduced to three days in some conditions, from seven days now, he said, adding that in some cases there would be no requirement to quarantine.

The change comes, Kishida said, as the number of coronavirus infections have shown signs of declining, meaning Japan needed to start preparing for a new phase.

Still, semi-emergency measures in place for some 17 regions will remain until March 6, he said.

U.S. Ambassador Rahm Emanuel commended the decision, saying in a statement it would benefit foreign students who wanted to come to Japan while still protecting public health.

Japan, which has effectively been sealed off to non-residents for two years, briefly eased its border controls late in 2021 but tightened them again just weeks later as the Omicron variant emerged overseas.

Japan currently designates 82 nations as "high risk" and requires a week of quarantine, including three or six days at a hotel, for many. Two weeks of quarantine were required until mid-January.

Kishida and his government have hailed the tight border controls for buying Japan time as Omicron surged around the world, and a vast majority of the public supports them.

Yet with the variant now widespread in Japan, which is struggling to roll out booster shots, business leaders and some politicians have warned the measures are obsolete.

For Kishida, who faces a crucial election in July, deciding when and how to change the measures has been tricky, said political analyst Atsuo Ito.

"If you look at the overall situation now, they're meaningless: you can get the virus anywhere. But as a result of having them, he got a lot of public support," he said.

If they're not changed, Ito added, "the result over the long term is that Japan is going to be left behind the rest of the world."