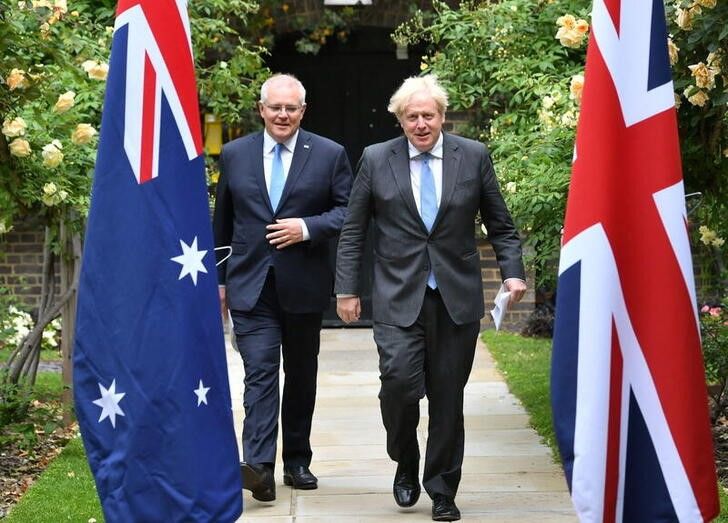 SYDNEY (Reuters) - Britain committed 25 million pounds ($34 million) to strengthen security in the Indo-Pacific as part of a pact with Australia, and leaders of both countries expressed "grave concerns" about China's policies in its far western region of Xinjiang.

In a video call on Thursday, British Prime Minister Boris Johnson and his Australian counterpart Scott Morrison also called for peace and stability across the Taiwan Strait and warned Russia against invading Ukraine.

"They agreed the need for de-escalation and underscored that any further Russian incursion in Ukraine would be a massive strategic mistake and have a stark humanitarian cost," the leaders said in a joint statement after their meeting.

The funds pledged to the Indo-Pacific security agreement would strengthen regional resilience in areas including cyberspace, state threats and maritime security, Morrison and Johnson said.

The bilateral talks come just a week after the so-called Quad group of Australia, the United States, Japan and India pledged to deepen cooperation to ensure the Indo-Pacific region was free from "coercion", a thinly veiled swipe at China's economic and military expansion.

Johnson and Morrison expressed "grave concerns about credible reports of human rights violations in Xinjiang, and called on China to protect the rights, freedoms and high degree of autonomy for Hong Kong."

The United States accuses China of genocide in its treatment of minority Muslim Uyghurs in Xinjiang and abuse including forced and prison labour. China denies the accusations.

China imposed a sweeping national security law on Hong Kong in 2020, a move critics said undercut the greater freedoms promised under the "one country, two systems" framework agreed when the former British colony returned to Chinese rule in 1997.

Morrison and Johnson also stressed "the importance of peace and stability across the Taiwan Strait, and expressed support for Taiwan's meaningful participation in international organisations."

China claims Taiwan as its own territory. Taiwan has complained about frequent incursions by China's air force into its air defence zone, part of what Taipei says is a pattern of harassment by Beijing.

Taiwan's Foreign Ministry expressed its thanks for the support, saying they would continue to deepen cooperation with fellow democracies like Britain and Australia.

The British and Australian leaders also stressed the importance of maritime rights and freedoms in the South China Sea, saying they were strongly opposed "to any unilateral actions that could escalate tensions and undermine regional stability and the international rules-based order, including militarisation, coercion, and intimidation."

(Reporting by Jahnavi Nidumolu and Ann Maria Shibu in Bengaluru and Jane Wardell in Sydney; Additional reporting by Ben Blanchard in Taipei; Editing by Leslie Adler and Mark Porter)