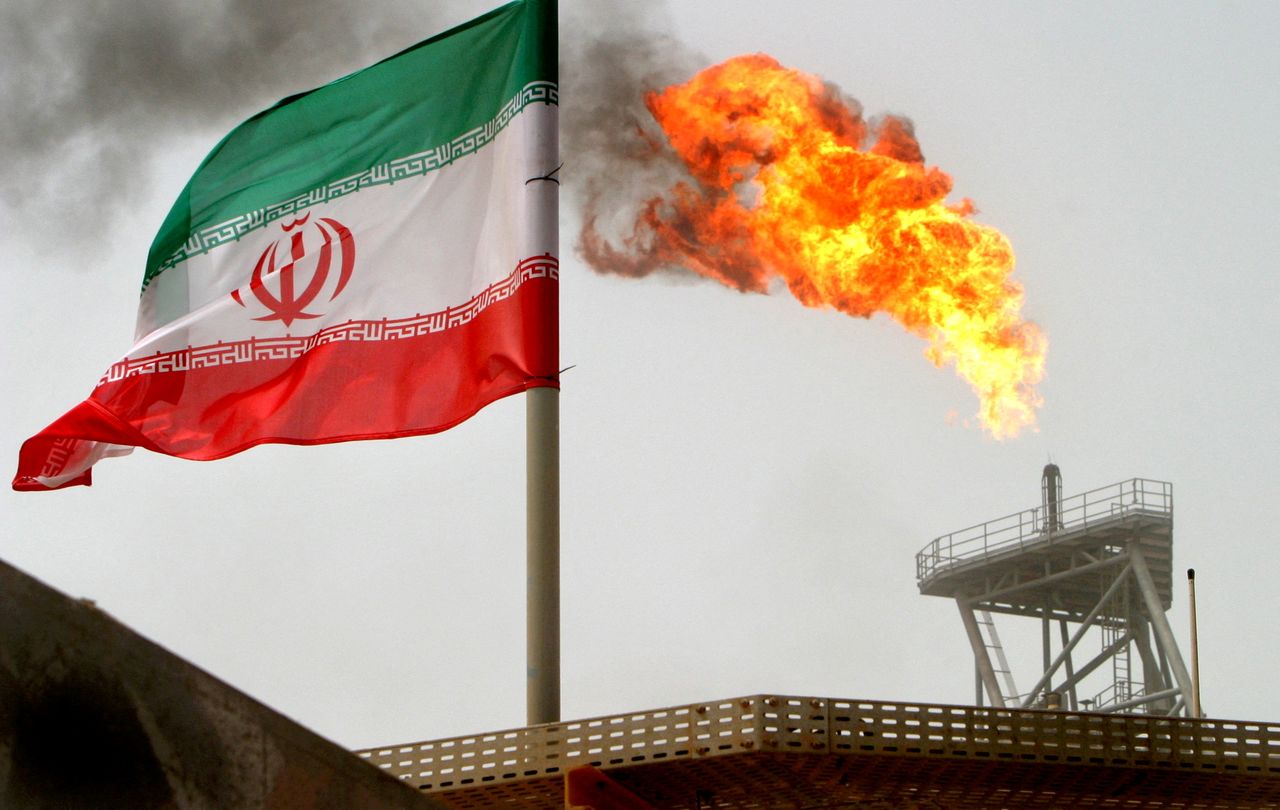 FILE PHOTO: A gas flare on an oil production platform is seen alongside an Iranian flag in the Gulf July 25, 2005. REUTERS/Raheb Homavandi

By Yuka Obayashi and Heekyong Yang

TOKYO/SEOUL (Reuters) -Asian refiners, traditionally big buyers of Iranian oil, are keen to resume imports from Iran if there is an agreement to revive a 2015 nuclear deal, which could pave the way for more supply on global markets and soften prices.

Indirect talks between Iran and the United States on the nuclear deal resumed last week. Western diplomats have indicated they hoped to have a breakthrough by now, but tough issues remain unresolved.

Oil prices are at their highest in more than seven years as fears of disruption in Russian energy supplies have boosted Brent and U.S. crude futures. Refiners are also paying record spot premiums for crude produced in Europe and the Middle East as producers struggle to meet a robust recovery in demand after the pandemic. [O/R] [L4N2US219]

With the prospect of a new Iran deal, South Korea, previously one of Tehran's leading oil customers in Asia, said on Wednesday it had held working-level talks on resuming imports of Iranian crude oil and unfreezing Iranian funds.

A major South Korean refinery is watching the developments at the nuclear talks, a company source said, as Iranian crude oil is cost-competitive and easy to process compared with other grades such as Mexican oil.

"As long as the two countries decide to resume oil trade, we can purchase crude from Iran," this source said.

"Since we've previously used crude oil from Iran, we don't need to test the oil at our facilities," he added.

Japan's top refiner Eneos Holdings Inc will consider resuming oil imports from Iran if an agreement to revive a 2015 nuclear deal is reached, its chairman said on Thursday.

"We have not begun such preparations yet, but we will consider resuming imports of crude oil from Iran as one of our procurement option if an agreement over the nuclear deal is reached," Eneos Chairman Tsutomu Sugimori told reporters.

It will take about two-to-three months to resume oil imports from Iran if and after such an agreement on the nuclear deal is made as the refiner will need to make various arrangements such as insurance and shipping, Sugimori said.

A refiner from India, Iran's No. 2 customer, is in talks with Iran for sourcing its oil, an Indian refining source said, adding that it was also waiting for more clarity on the nuclear deal. The sources declined to be identified due to sensitivity of the matter.

Iran has kept some exports flowing despite sanctions as intermediaries find ways to disguise the origins of the imports and China, Iran's biggest customer, has been a big destination.

"Although not a done deal yet, prices are sliding on news of progress and broad consensus in the talks as it could ultimately see up to 900,000 barrels per day of crude added to the market by December this year," he said.

(Reporting by Yuka Obayashi in TOKYO, Heekyong Yang in SEOUL and Nidhi Verma in NEW DELHI; Editing by Florence Tan and Jane Merriman)