By Gayatri Suroyo and David Lawder

JAKARTA/WASHINGTON (Reuters) -Russia and China watered down a G20 finance leaders' statement on geopolitical risks to the global economy as a contentious meeting ended on Friday, deleting a reference to "current" tensions as financial markets fretted over the prospect of war in Ukraine.

The gathering of finance ministers and central bank governors from the Group of 20 major economies was one of the most fractious since the start of the COVID-19 pandemic in 2020, according to people familiar with the discussions.

Canadian Finance Minister Chrystia Freeland strayed from the G20 economic script to issue an impassioned plea to her Russian counterparts to not invade Ukraine, warning that such action would hurt the global economy and bring "crushing" sanctions against Russia, according to two sources familiar with her remarks.

Other sources familiar with the meeting said China and Russia had objected to the reference to "current tensions" in an earlier draft communique, as well as disagreements on debt restructuring for poor countries and carbon pricing.

The group's final communique simply said: "We will also continue to monitor major global risks, including from geopolitical tensions that are arising, and macroeconomic and financial vulnerabilities."

As the meeting concluded, U.S. and European stocks fell on worries that a Russian invasion of Ukraine was imminent after Russian-backed separatists announced a surprise evacuation of their breakaway regions in eastern Ukraine.

The G20 talks, held virtually and in the Indonesian capital, Jakarta, were also marked by disagreements over the group's stalled debt restructuring framework.

The final communique failed to endorse International Monetary Fund and World Bank proposals for an immediate debt service suspension for poor countries that seek restructurings and an expansion to include some middle-income countries.

Instead, finance officials reiterated their "commitment to step up our efforts" to implement the framework in a "timely, orderly and coordinated manner" without any specifics.

Earlier, a source at the talks said China, by far the world's largest bilateral creditor, had baulked at the idea of accepting outright haircuts on debt.

World Bank President David Malpass said at the Munich Security Conference after the finance meeting that he was concerned the G20 "is not identifying the steps forward" to deal with a massive and growing debt overhang in developing countries.

"The G20 discussions on debt were really disappointing," said Eric LeCompte, executive director of the Jubilee USA Network, a faith-based organization campaigning for debt relief for poor countries. He said China was resisting steps to strengthen the bankruptcy-like G20 debt framework "so that they can cut deals on the side" with debtor countries.

Indonesia's finance minister, Sri Mulyani Indrawati, said other sticking points involved the reticence of some countries to endorse carbon-pricing as a tool to tackle climate change and how to help low-income countries such as Chad, Zambia and Ethiopia struggling with debt burdens made yet more unsustainable during the coronavirus pandemic.

"This also concerns the reputation and credibility of the G20 as a group of countries with the biggest economies to help countries that are in an uneasy situation," she said.

On other subjects, the final draft of the G20 text pledged to use "all available policy tools to address the impacts of the pandemic," while warning that future policy space was likely to be "narrower and uneven."

"Central banks will act where necessary to ensure price stability in line with their respective mandates, while remaining committed to clear communication of their policy stances."

The diverging pace of recovery from the pandemic is complicating the policy path for central banks. Expected steady interest rate hikes by the U.S. Federal Reserve have drawn attention to the potential fallout for emerging markets.

While cases of the Omicron variant of COVID-19 are receding in many wealthy countries, they are still rising in many developing nations including host country Indonesia.

The G20 text also pledged to ensure that a landmark deal last year setting a global minimum level of corporate tax could be put into force in 2023. [nL1N2UT0JV] 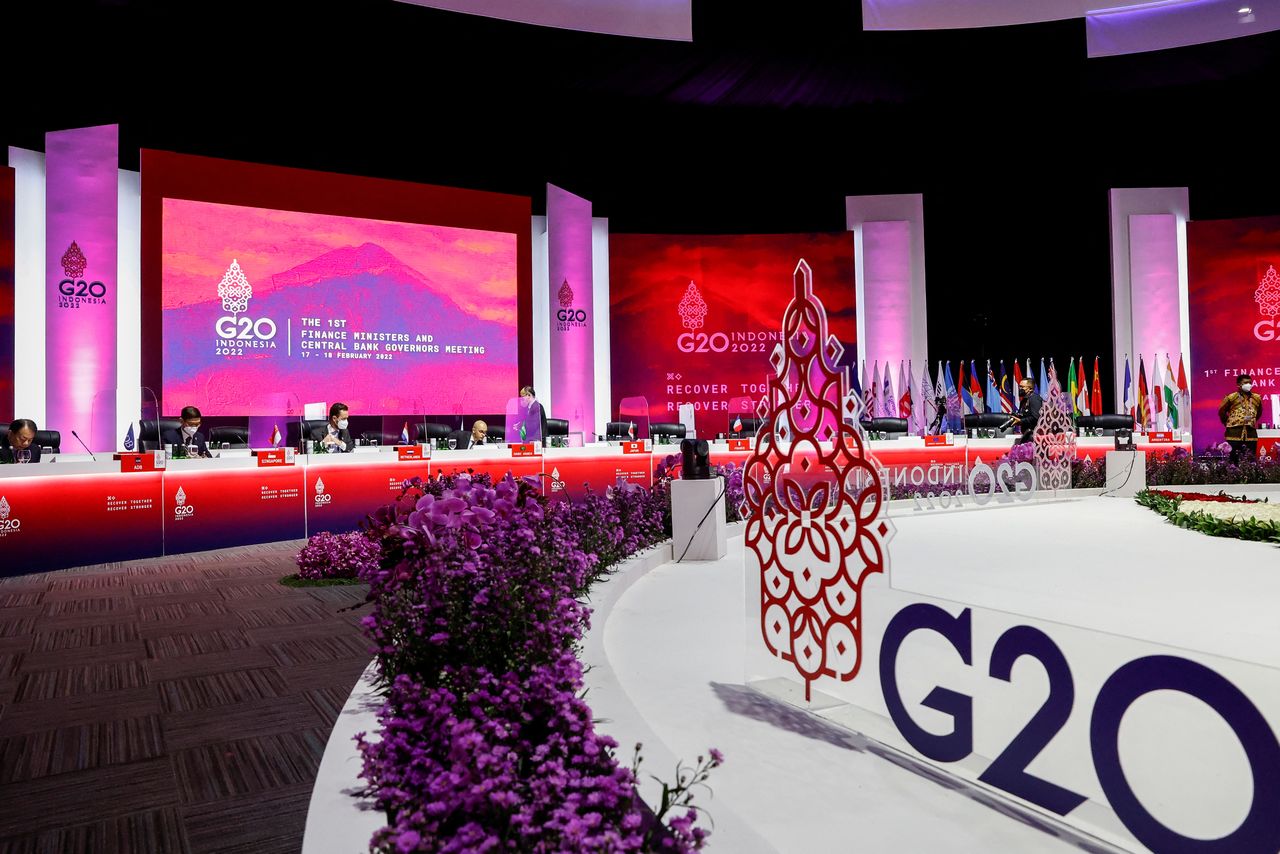 Head of delegates prepare for a meeting on the last day of the G20 finance ministers and central bank governors meeting in Jakarta, Indonesia, February 18, 2022. Mast Irham / Pool via REUTERS 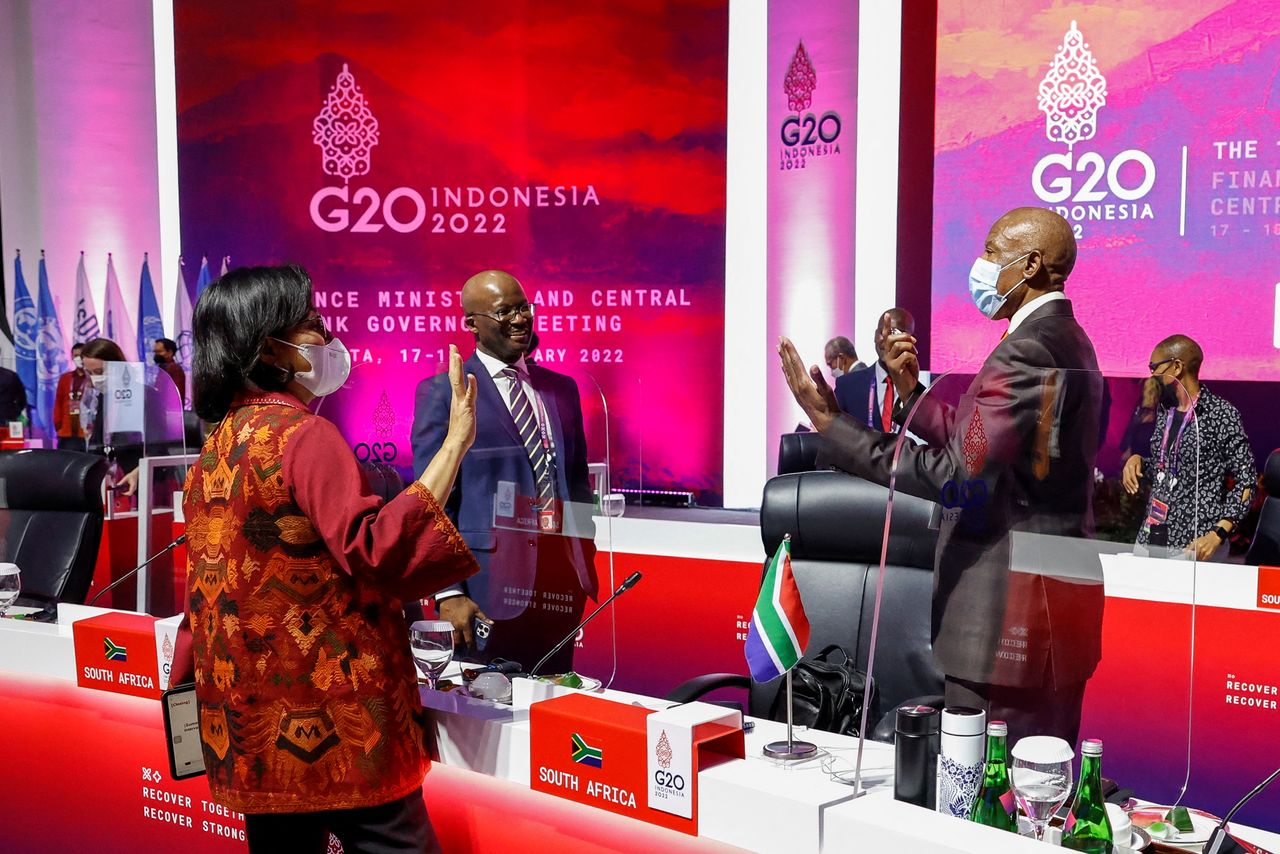 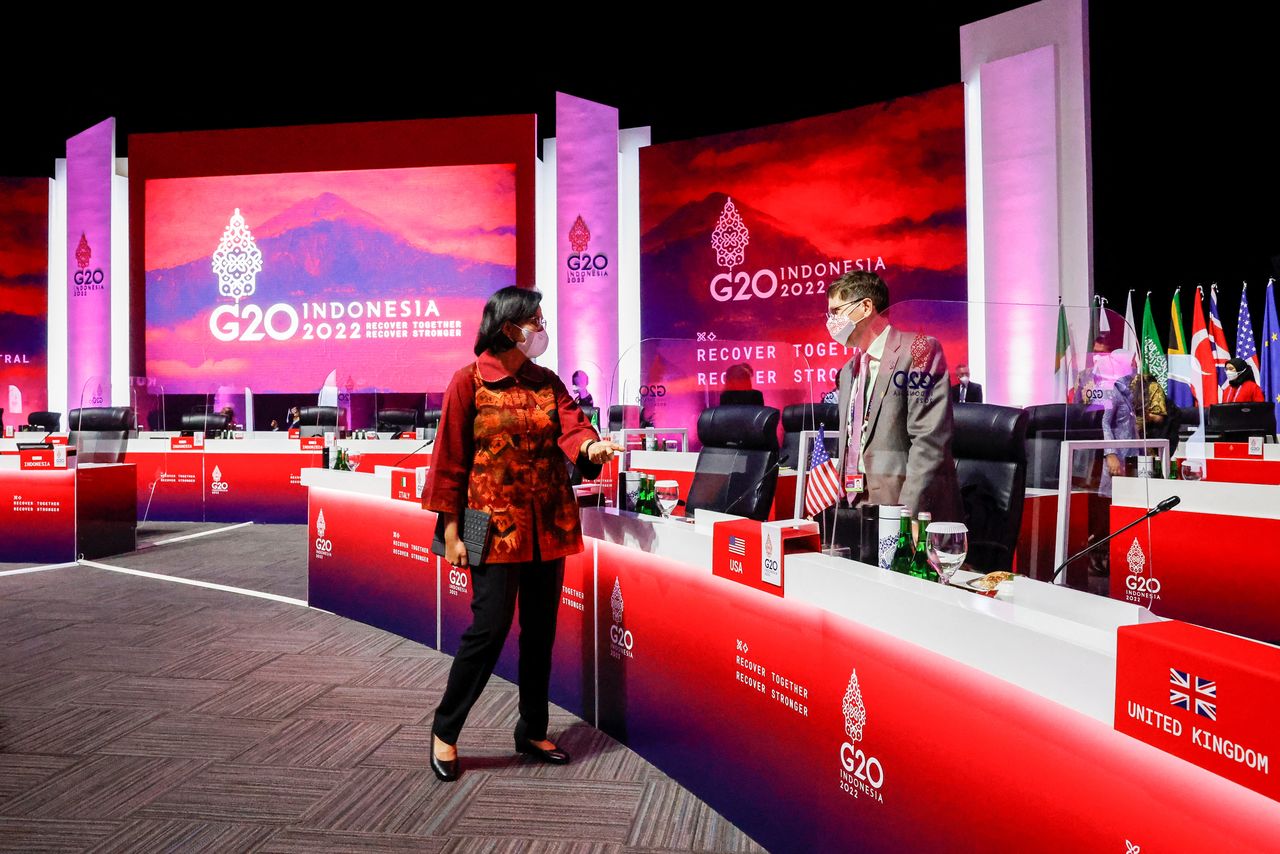 Indonesia's Finance Minister Sri Mulyani Indrawati talks to US Under Secretary of International Affairs Department of Treasury Andy Baukol prior to a meeting on the last day of the G20 finance ministers and central bank governors meeting in Jakarta, Indonesia, February 18, 2022. Mast Irham / Pool via REUTERS