U.S.-Russian cooperation in space abides despite tensions over Ukraine

(Reuters) - The longstanding collaboration between the United States and Russia in operating the International Space Station (ISS) appears to be on solid footing even as tensions between the two countries build over the Ukraine crisis.

Some seven weeks after the Biden administration pledged its commitment to keeping ISS operational through 2030, NASA is still in talks with Roscosmos, its Russian counterpart, on a new "crew exchange" deal. Under such an agreement, the two former space rivals would routinely share flights to the station on each other's spacecrafts, the U.S. space agency said on Wednesday.

The research platform, about the length of a football field and orbiting some 250 miles (400 km) above Earth, is currently home to a crew of four Americans, two Russians and a German astronaut working side-by-side in microgravity.

One of the NASA astronauts, Mark Vande Hei, flew to the outpost in March 2021 aboard a Russian Soyuz spacecraft and is due to return to Earth on March 30 in a Soyuz with cosmonaut peers Pyotr Dubrov and Anton Shkaplerov.

"Ongoing station operations continue, including work to fly crew to the orbital outpost and return them safely to Earth," NASA spokesman Dan Huot said in an email to Reuters. Roscosmos did not immediately respond to a Reuters' request for comment.

The ISS itself was born in part from a foreign policy initiative to improve U.S.-Russian relations following the collapse of the Soviet Union and end of Cold War rivalry that spurred the original U.S.-Soviet space race.

But U.S.-Russian ties have frayed since Russia's 2014 annexation of the Crimea region from Ukraine, prompting Congress to ban new government contracts with U.S. companies using Russian rocket engineers for national security launches after 2022, according to the website SpacePolicyOnline.com.

None of the sanctions levied by Washington in response to Russia's military incursions into eastern Ukraine this week were directed at Russia's space program.

FROM SPACE RACE TO TEAMWORK

After ending its space shuttle program in 2011, the United States began paying Roscosmos to ferry NASA astronauts to and from the space station aboard Soyuz capsules. NASA resumed launching its own crew members from U.S. soil in 2020, even as it continued to hitch some rides on Soyuz.

The new agreement would pave the way for more NASA crew to fly aboard Soyuz in exchange for Russian cosmonauts sharing rides with U.S. astronauts on SpaceX flights, all free of charge. In anticipation of such a deal, three Russian cosmonauts are already training at NASA's Johnson Space Center near Houston, NASA said.

The United States, Russia, Canada, Japan and the 11-nation European Space Agency are separately hammering out terms of extending ISS operations beyond its current end date of 2024, as resupply of the station continues.

A Cygnus cargo spacecraft launched for NASA on Saturday by Northrop Grumman arrived at the orbital laboratory on Monday carrying 8,300 pounds of food, fuel and equipment.

Underscoring the degree to which U.S. and Russian space interests are enmeshed, the Cygnus was flown to orbit atop an Antares rocket, whose first stage is largely designed and built in Ukraine and powered by two Russian-made RD-181 engines.

Another Russian motor is the main engine of Atlas V rockets flown by United Launch Alliance, a joint venture of Boeing Co and Lockheed Martin Corp.

Even before the Ukraine crisis escalated in recent weeks, U.S.-Russian space cooperation was shaken in mid-November when Russia blasted one of its own defunct surveillance satellites in an unannounced missile test that generated a debris field in low-Earth orbit, threatening the space station.

All seven ISS crew members, including two cosmonauts, were forced to take shelter in their docked spaceships for about two hours afterward in case a quick getaway was needed.

At the time, NASA chief Bill Nelson denounced the anti-satellite test as "reckless." He was quoted by the Washington Post as saying Russia's space agency was likely surprised by the test and "probably just as appalled as we are." 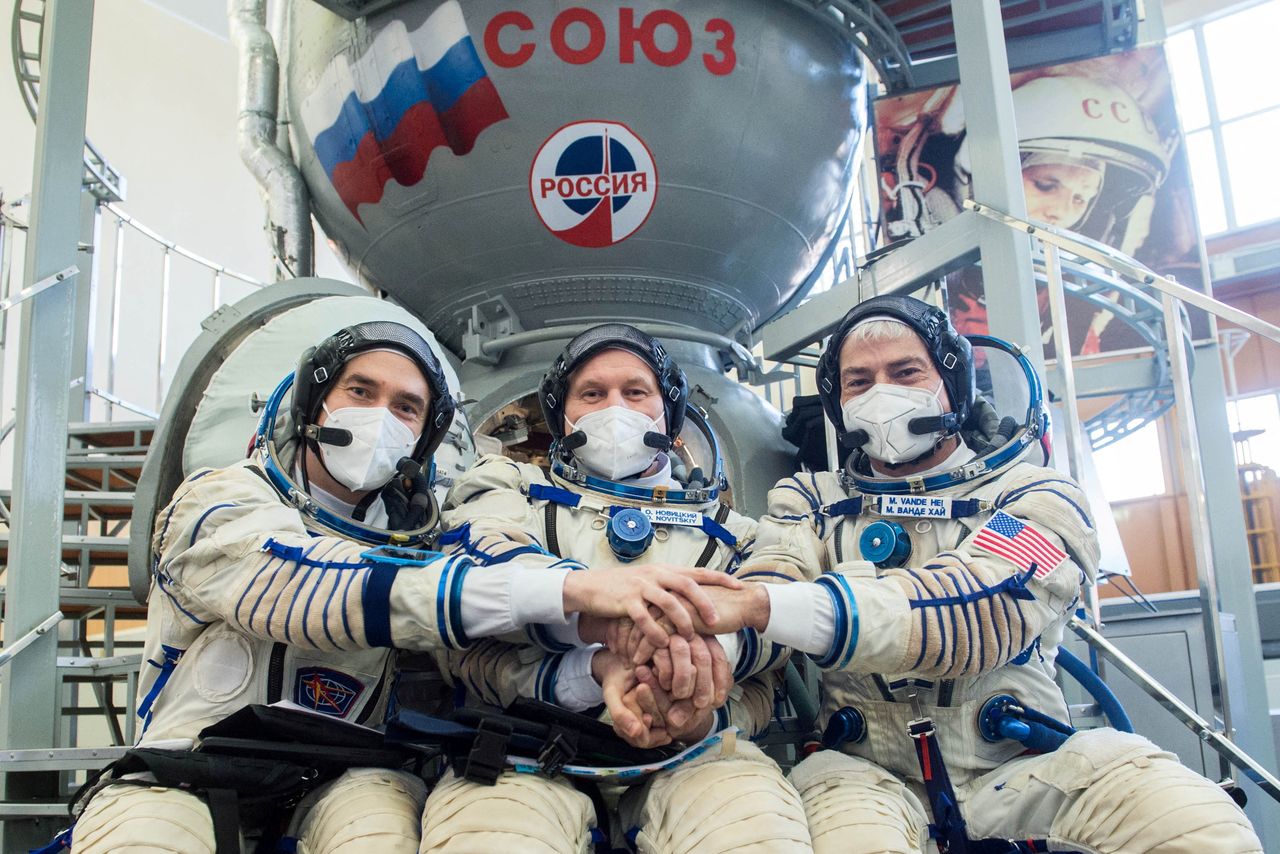 FILE PHOTO: Cosmonauts of the Russian space agency Roscosmos Pyotr Dubrov, Oleg Novitskiy and NASA astronaut Mark Vande Hei pose for a picture during a training session ahead of their expedition to the International Space Station (ISS) in Star City, Russia March 20, 2021. Andrey Shelepin/GCTC/Russian space agency Roscosmos/Handout via REUTERS ATTENTION EDITORS - THIS IMAGE HAS BEEN SUPPLIED BY A THIRD PARTY. MANDATORY CREDIT/File Photo 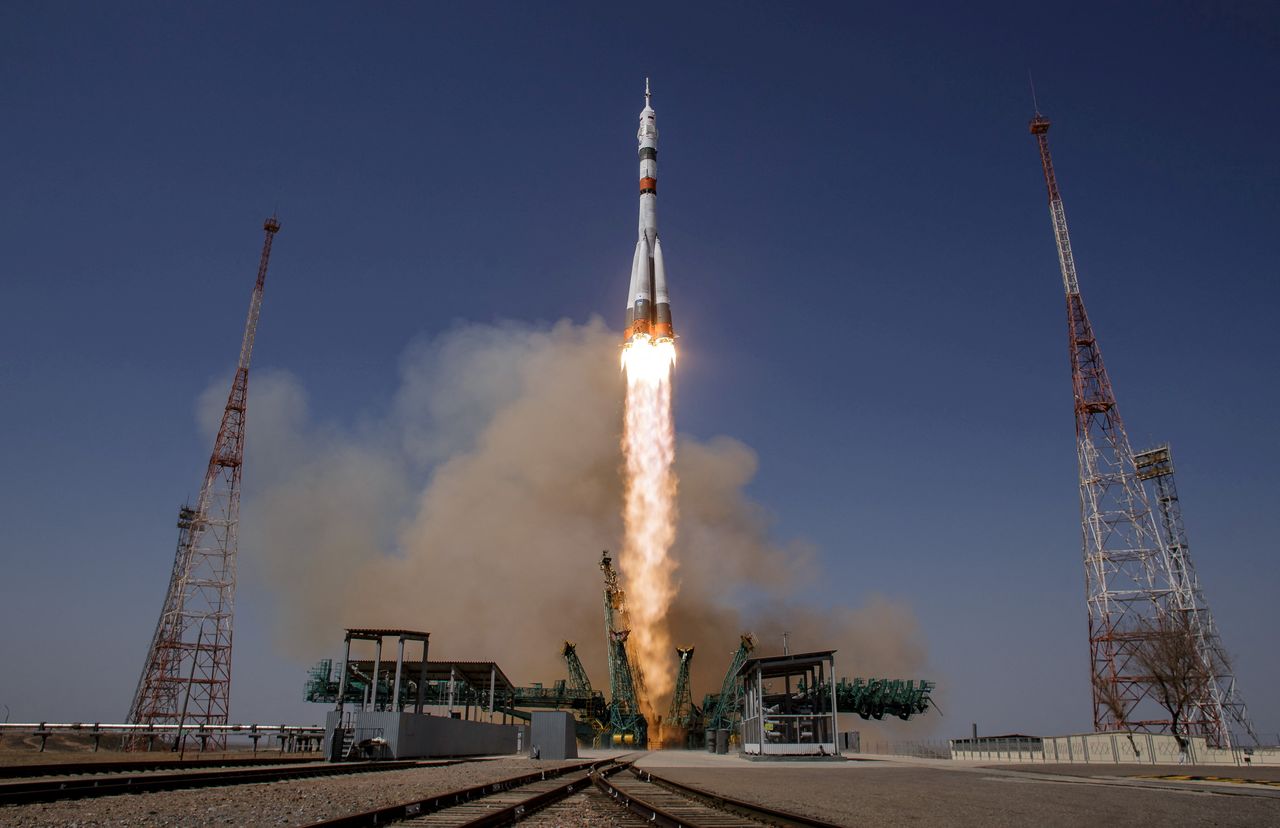 FILE PHOTO: The Soyuz MS-18 spacecraft carrying the crew formed of Mark Vande Hei of NASA and cosmonauts Oleg Novitskiy and Pyotr Dubrov of Roscosmos blasts off to the International Space Station (ISS) from the launchpad at the Baikonur Cosmodrome, Kazakhstan April 9, 2021. NASA/Bill Ingalls/Handout via REUTERS. THIS IMAGE HAS BEEN SUPPLIED BY A THIRD PARTY. MANDATORY CREDIT./File Photo