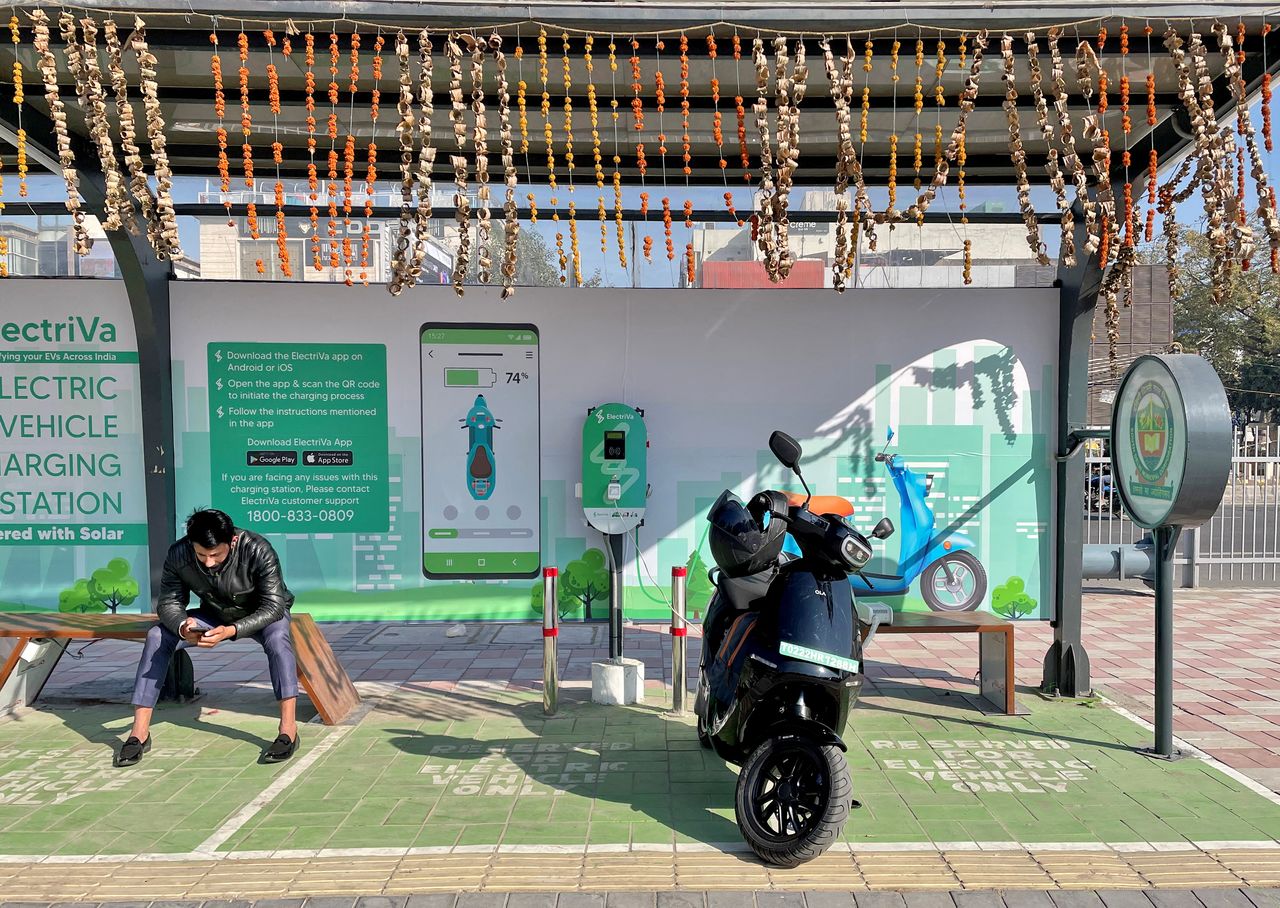 A man checks his mobile phone as he waits while recharging his Ola electric scooter at an electric vehicle charging station in New Delhi, India, February 12, 2022. REUTERS/Aditi Shah

NEW DELHI (Reuters) - Softbank Group-backed Ola Electric plans to build a battery cell manufacturing plant in India with a capacity of up to 50 gigawatt hours (GWh), a source told Reuters, as part of its broader electrification push.

Ola will need 40Gwh of battery capacity to meet its annual target to produce 10 million electric scooters and the remainder will be for electric cars, which it plans to manufacture in the future, said the person who has knowledge of the plans.

The initial plan is to set up 1Gwh of battery capacity by 2023 and expand it to 20GWh over the next 3-4 years, said another source aware of the plans, adding that this alone will need an investment of up to $1 billion.

Ola, which currently imports battery cells from South Korea, also plans to invest in companies with advanced cell and battery technology, and will set up a battery research and development facility in India, the sources said.

Battery cell manufacturing is dominated by a handful of Asian companies including CATL, LG Energy Solutions and Panasonic that supply to major global automakers like Tesla Inc and Volkswagen.

Recalls of EV batteries from some of the biggest producers have shown how demanding it is to produce them on a large scale, coupled with setting up an extremely complex supply chain with both corporate and geopolitical risks.

"Battery and cell research and manufacturing is an important area of focus for us and our plans are in the advanced stages. We will not comment on the specifics," Varun Dubey, chief marketing officer at Ola Electric, said in an emailed response to Reuters questions.

India wants companies to build clean fuel vehicles and batteries locally to cut the country's oil import bill and reduce pollution. The government plans to give incentives of up to $6 billion for this, and Ola is among those that have bid for them.

However, Ola's ambitious electrification plan has got off to a shaky start with production and delivery delays, senior level exits and criticism of its product by some Twitter users.

The battery plans come even as the company is yet to ramp up scoooter production to a sizeable level. Ola currently produces about 1,000 scooters a day, its CEO said on Twitter, and has a target of two million in the first phase.

Ola did not give a timeline on when it would scale up to two million or 10 million scooters.