From Tokyo to New York, thousands protest against invasion of Ukraine

(Reuters) - Protesters turned out on public squares and outside Russian embassies in cities from Tokyo to Tel Aviv and New York on Thursday to denounce the invasion of Ukraine -- while more than a thousand who tried to do the same in Russia were arrested.

The earliest known protest occurred outside Russia's embassy in Washington around 1 a.m. EST (0600 GMT) on Thursday, only three hours after President Vladimir Putin said he had launched his military operation.

In London, hundreds of demonstrators, many of them Ukrainian and some weeping, gathered outside Downing Street, home to the prime minister, urging Britain to do more.

"We need help, we need someone to support us," said one. "Ukraine is too small and the pressure is too big."

In Paris, one demonstrator told Reuters: "I feel that we are in a very dangerous moment for the whole world."

In Madrid, Oscar-winning Spanish actor Javier Bardem, nominated for another Academy Award this year, joined about a hundred protesters outside the Russian embassy.

"It is an invasion. ... It violates Ukraine's fundamental right to territorial sovereignty, international law, and many other things," Bardem said.

A giant flag was carried through Manhattan's Times Square by a crowd of several hundred protesters.

Agapi Tamir, 28, one of a few dozen members of Greece's Ukrainian community who staged a protest in Athens, said:

"The only thing we believe is that a miracle will stop all this awful and frightening thing that is happening at this moment."

A small demonstration in Geneva, organised by the Nobel Peace Prize-winning International Campaign to Abolish Nuclear Weapons (ICAN) outside the U.N. European headquarters, condemned what the group said was Putin's threat to use nuclear weapons.

Other demonstrations were held in Beirut, Tel Aviv, Dublin and Prague.

Also in Dublin, a Russian double-eagle crest beside the gate of the Russian embassy was defaced with red paint.

More protests were scheduled for later in the day in the U.S. cities of Houston and Denver, according to social media posts.

In Russia itself, protesters defied an official warning that explicitly threatened criminal prosecution and even jail time for those calling for or taking part in protests.

Hundreds rallied in cities including Moscow, St Petersburg and Yekaterinburg, chanting slogans such as "No to war!" and holding up makeshift signs.

By 1939 GMT, police had detained no fewer than 1,667 people in 53 cities, the OVD-Info rights monitor said. Six hundred were arrested in Moscow alone, the Tass news agency reported.

(Reporting by Reuters bureaux around the world; Writing by Kevin Liffey) 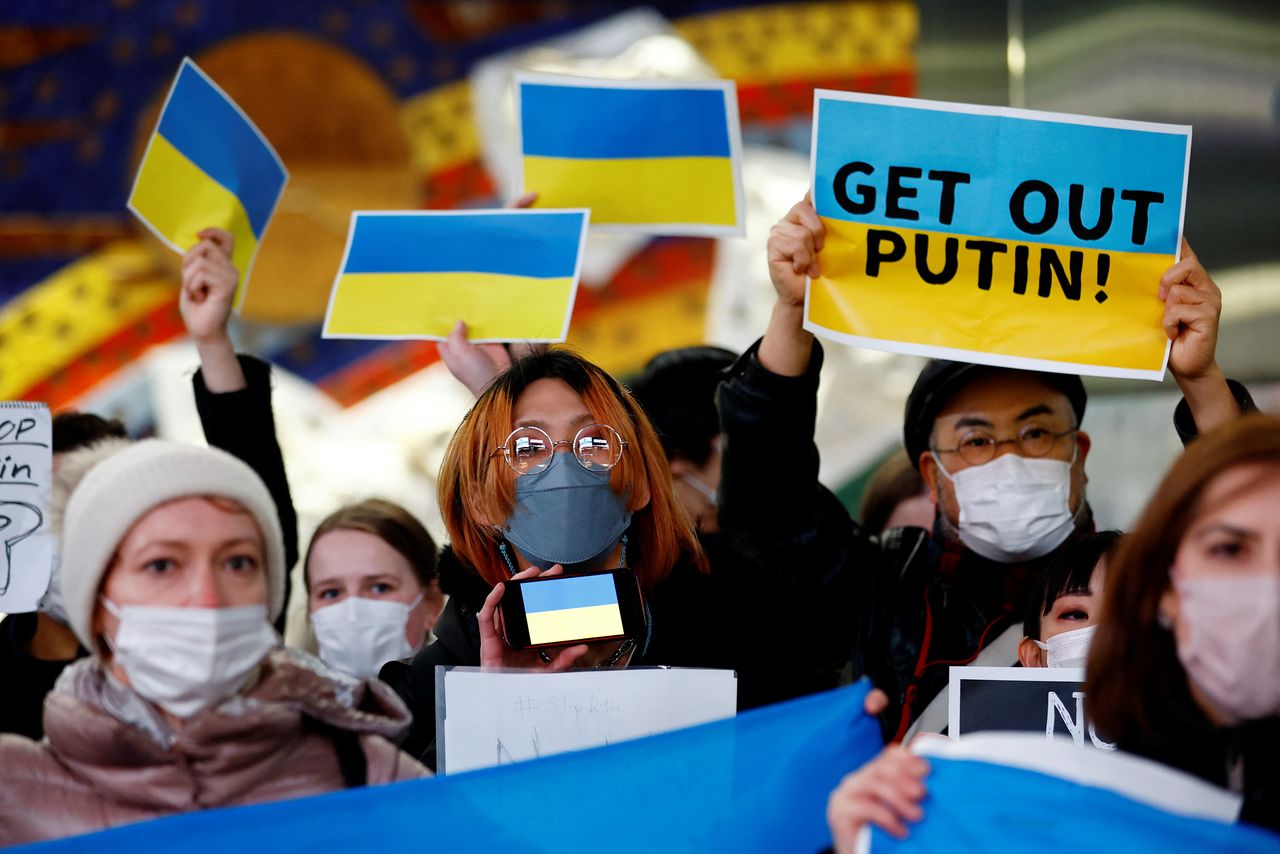 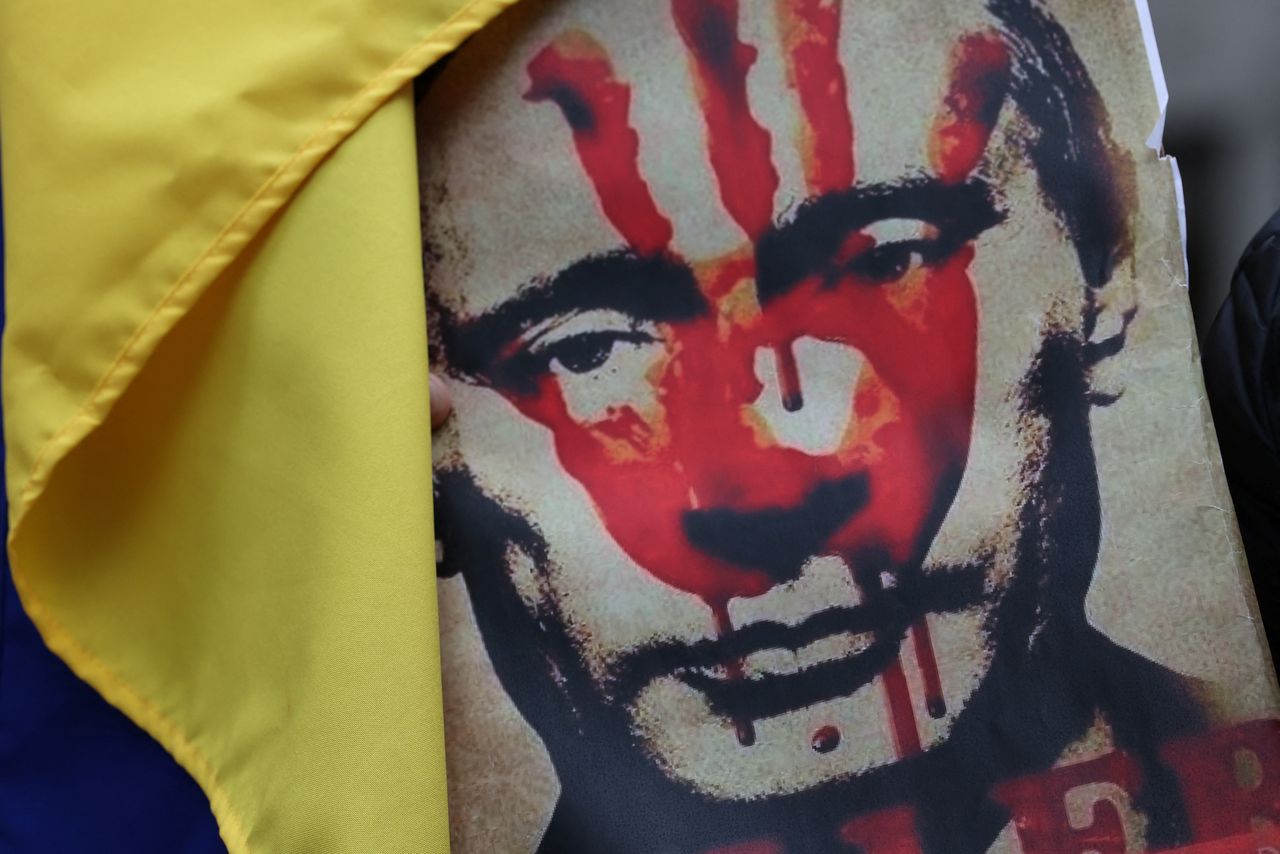 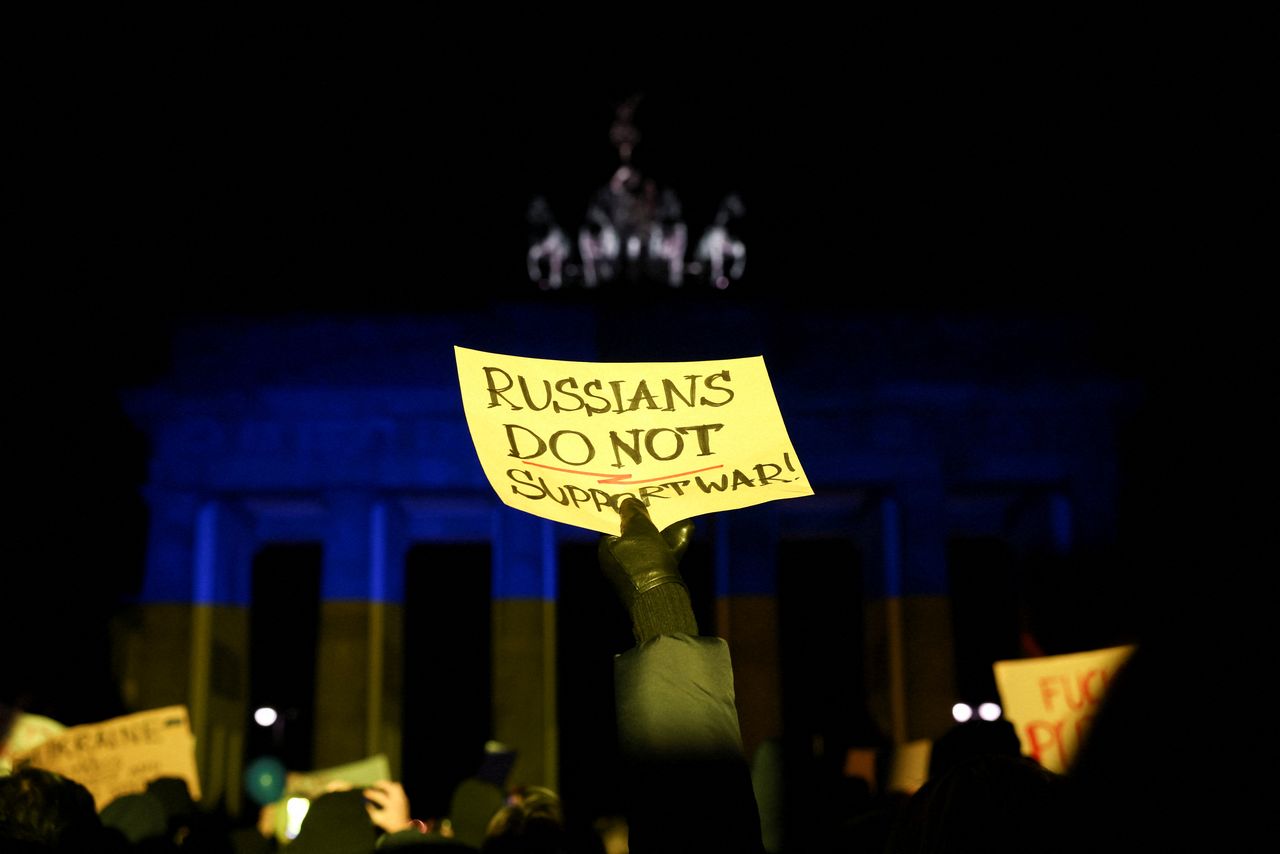 A person holds a sign in front of Brandenburg Gate lit up in the colours of Ukrainian flag during an anti-war protest, after Russia launched a massive military operation against Ukraine, in Berlin, Germany February 24, 2022. REUTERS/Christian Mang 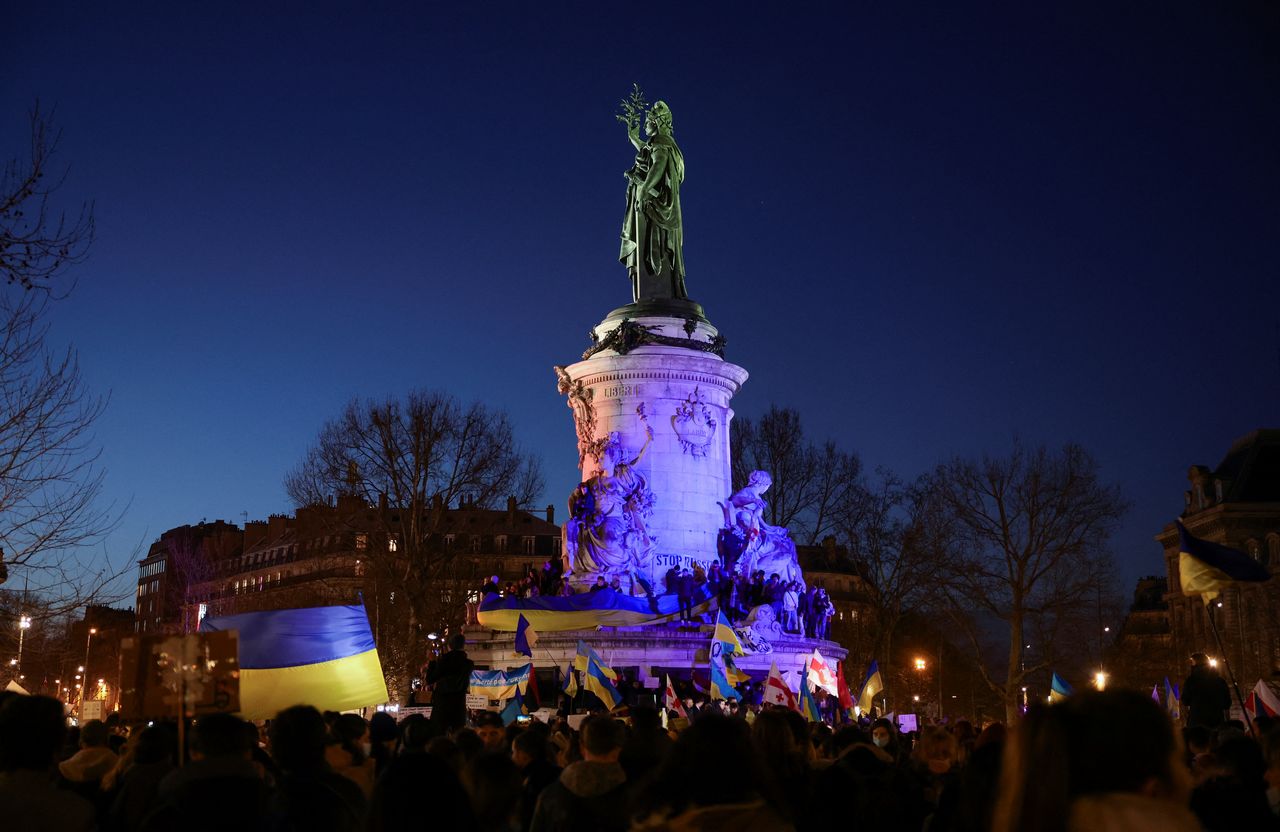 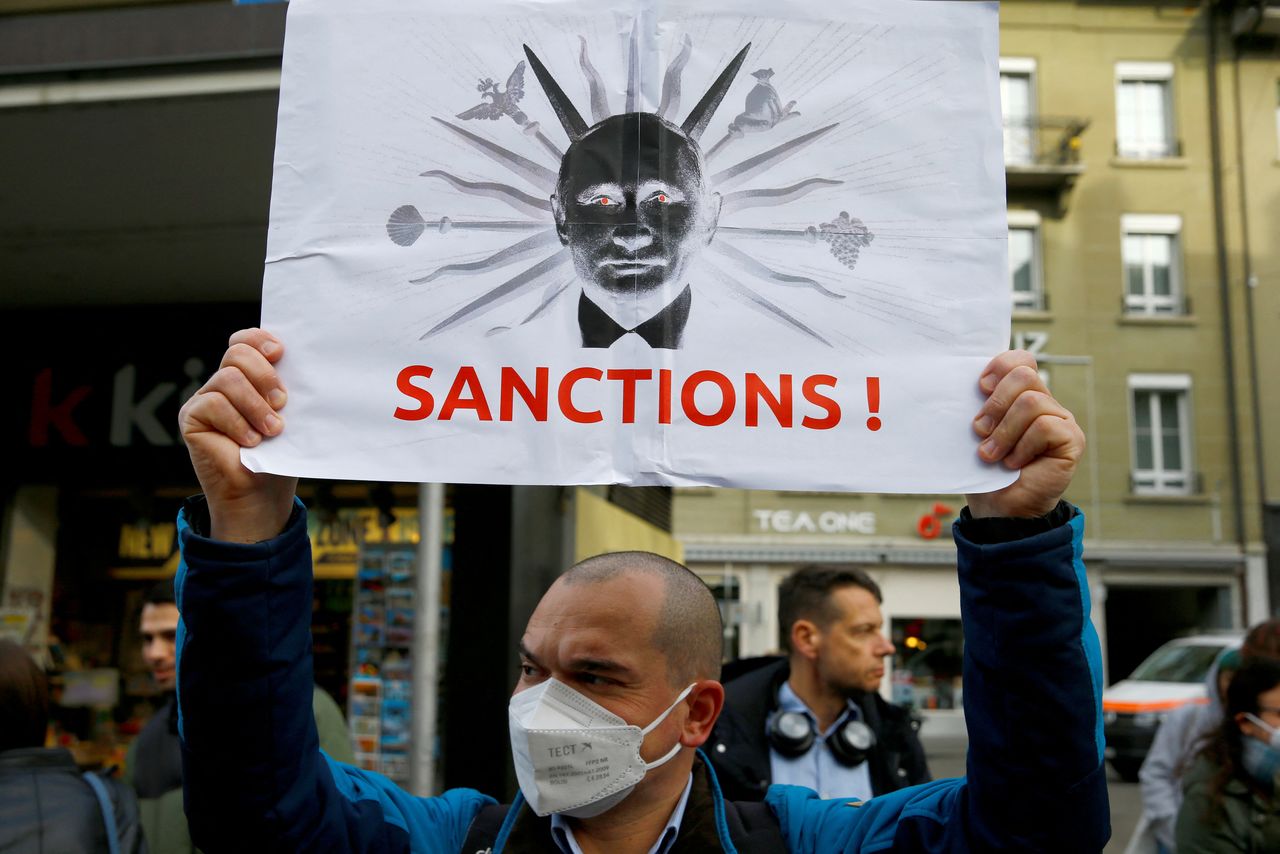 A man displays a poster during a protest by Ukranian people living in Switzerland, in Bern, Switzerland February 24, 2022. REUTERS/Arnd Wiegmann 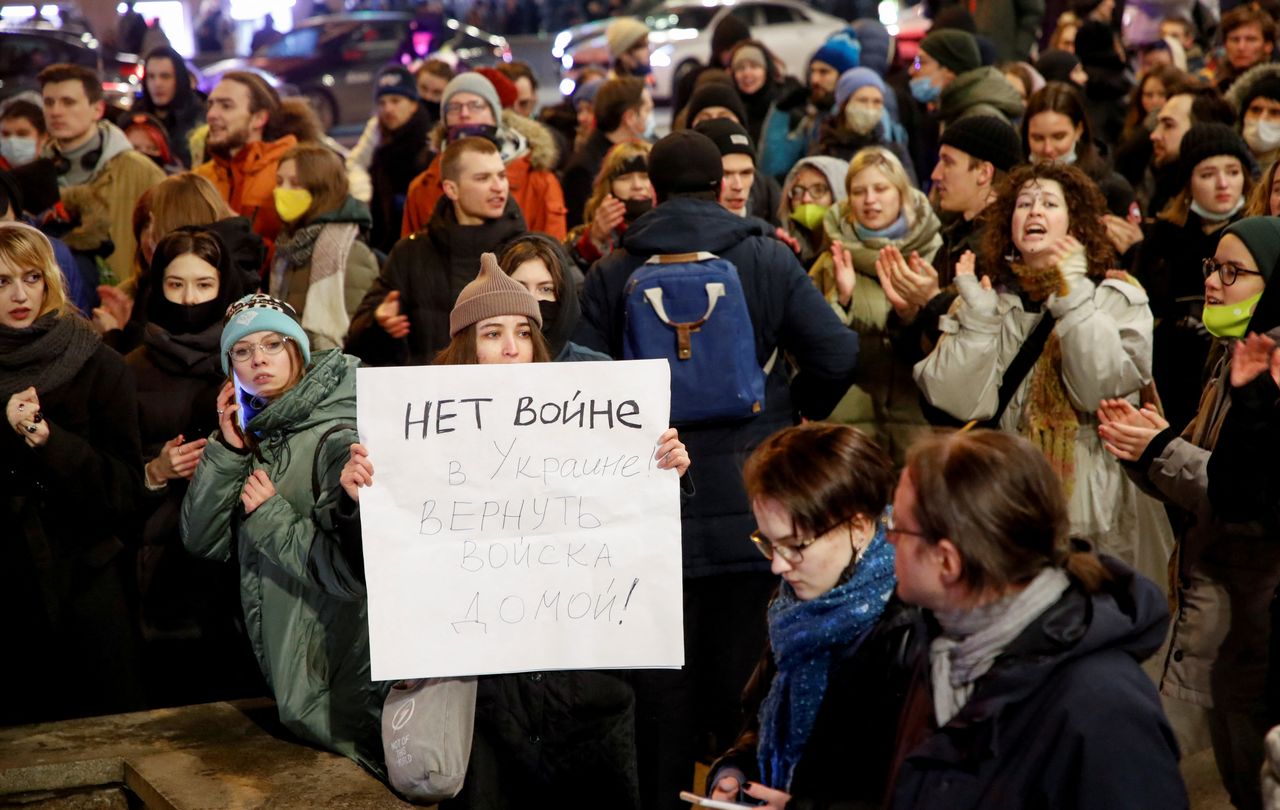 A demonstrator displays a placard during an anti-war protest, after Russian President Vladimir Putin authorized a military operation in eastern Ukraine, in Saint Petersburg, Russia, February 24, 2022. The placard reads: 'No to war in Ukraine! Return the forces home!' REUTERS/Anton Vaganov