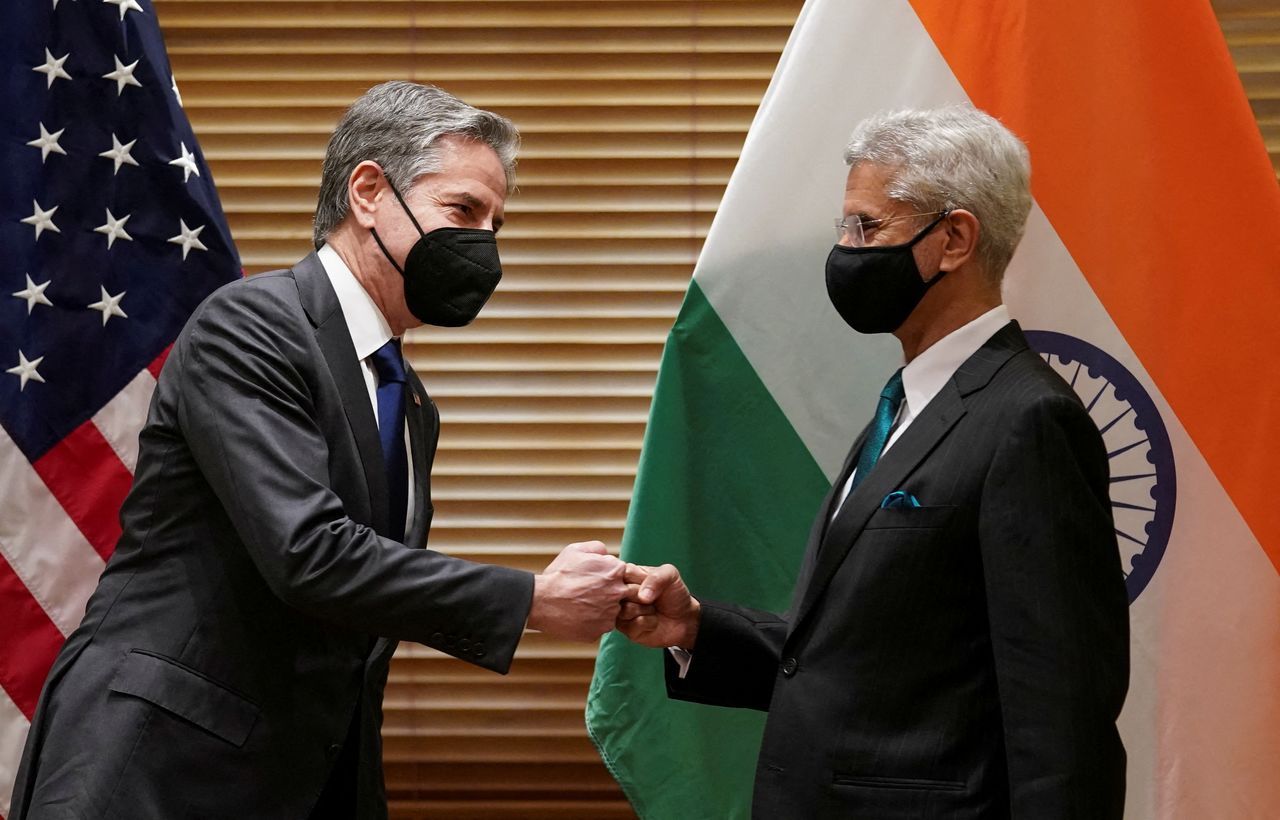 By David Brunnstrom and Kanishka Singh

WASHINGTON (Reuters) -U.S. President Joe Biden said on Thursday Washington is in still unresolved "consultations" with India, when asked if Washington and Delhi were fully in sync on a response to Russia's attack on Ukraine ahead of an expected U.N. Security Council vote.

Biden did not elaborate, but his short response to a question at a briefing at which he announced tough new sanctions on Russia over Ukraine drew attention to an awkward division between his administration and India, a country central to its efforts to push back against China's growing power.

India has developed close ties with Washington in recent years but has a long-standing close relationship with Moscow, which remains a major supplier of its defense equipment.

The 15-member United Nations Security Council, of which India is a member, is likely to vote on Friday on a draft resolution that would condemn Russia for invading Ukraine and require Moscow to immediately and unconditionally withdraw, a senior U.S. administration official said.

Russia is expected to veto the step, but Washington sees the vote as a chance to try and isolate Moscow, seeking at least 13 votes in favor and an abstention by Russia's partner - China.

India has so far avoided condemning Russian actions in Ukraine, although Indian Prime Minister Narendra Modi did urge an end to violence there in a call with Russian President Vladimir Putin.

Biden said Putin would be a pariah on the international stage as a result of his attack on Ukraine and "any nation that countenances Russia's naked aggression against Ukraine will be stained by association."

Asked if India was fully in sync with the United States, he said: "We're in consultation with India today. We haven't resolved that completely."

In a statement, the U.S. State Department said U.S. Secretary of State Antony Blinken spoke with Indian Foreign Minister Subrahmanyam Jaishankar on Thursday and "stressed the importance of a strong collective response to condemn Russia's invasion and call for an immediate withdrawal and ceasefire."

In a tweet, Jaishankar said he discussed the implications of developments in Ukraine with Blinken, without disclosing further details about the call.

Jaishankar also said he had spoken to his Russian counterpart Sergey Lavrov and "underlined that dialogue and diplomacy are the best way forward."

Delhi has upset Washington with its purchase of Russia's S-400 air defense system, putting it at risk of U.S. sanctions under a 2017 U.S. law aimed at deterring countries from buying Russian military hardware.

In December, Russia and India signed more trade and arms deals during a visit by Russian President Vladimir Putin, including one that will see India produce more than 600,000 Kalashnikov assault rifles.

While there have been calls in Congress to exempt India from sanctions, some analysts say Russia's actions in Ukraine could bring increased pressure for sanctions from Russia hawks in the administration.

Any sanctions could jeopardize U.S. cooperation with Delhi in the Quad forum with Japan and Australia aimed at pushing back against China's expanding influence.

The White House did not immediately respond when asked to elaborate on Biden's comment and a State Department spokesperson said: "We are continuing to consult with our Indian counterparts on a collective response to Russia's invasion of Ukraine."