From Berlin streets to Sydney, global outpouring of support for Ukraine

GENEVA/SYDNEY (Reuters) - In a sea of blue and yellow flags and banners smeared with blood red handprints, protesters around the world showed support for Ukraine on Saturday and called on governments to do more to help Kyiv, punish Russia and avoid a broader conflict.

Several hundred people marched through heavy rain in Sydney chanting "Ukraine will prevail", while protesters in Tokyo called for Russia to be expelled from the United Nations Security Council for the assault on its neighbour.

Thousands of people also took to the streets in Europe, with protesters - including many Ukrainians living abroad - in London, Nicosia, Berlin, Athens, Helsinki, Madrid and Milan draping themselves in flags and holding "stop the war" placards.

A rally that organisers estimated to number 20,000 people was held in the Swiss capital of Bern. The Ukrainian flag flew over the seat of the city council.

Around 1,000 people protested outside the Russian embassy in Romanian capital Bucharest, expressing anger at Russian President Vladimir Putin for what they saw as an unprovoked attack on Ukraine. They chanted "Putin the assassin".

An activist smeared an embassy sign with red handprints that were a feature at rallies in several countries. A protester threw eggs before riot police intervened.

"Somehow, together with everybody, with all the countries in Europe and ... all the world, we need to stop" Putin, said Abramov Kiril, a 33-year-old Ukrainian living in Romania who said the EU and NATO should help more.

"If they will not stop him in Ukraine he will go forward," said Kiril, who still has grandparents in southern Ukraine.

Some called for the Swiss government to take tougher action against Russia and Putin, who said he ordered the "special operation" not to occupy territory but to destroy Ukraine's military capabilities and capture what the Kremlin regards as dangerous nationalists.

Moscow says it is taking care not to hit civilian sites.

In Istanbul, Ukrainians living in Turkey sang their national anthem and held banners with images of bloody handprints.

"My family is in Kyiv region and they are attacking Kyiv today. I don't know what to do, what to think. I am calling them every 10 to 15 minutes," a protester who gave her name as Victoria said.

Hundreds of people demonstrated in the square in front of the United Nations headquarters in Geneva, carrying signs such "Make Ukraine a member of NATO now" and "Say no to Putin".

"I'm here because I'm extremely ashamed for my country of birth," said Valery Bragar, a native Russian who has lived in Switzerland for 15 years and is now a Swiss citizen.

The protests come on the heels of other demonstrations around the world in the past days. In Latin America, protesters joined rallies on Friday in Argentina, Brazil, Mexico and Peru, chanting "Long live Ukraine".

In Russia too, anti-war campaigners have defied warnings from the authorities to voice their anger. Police on Thursday detained more than 1,600 Russian protesters.

Several hundred Russian, Ukrainian and Japanese protesters gathered in the busy Shibuya shopping district in central Tokyo, many with their children and holding Ukrainian flags, chanting "stop the war" and "stop Putin" in Japanese and English.

In India, some of the anger was directed towards NATO and the West.

"The kind of aggression we are witnessing in Ukraine has been forced by U.S. through NATO and also the Russian military forces who have entered Ukraine. Both are responsible for this situation," student activist Neha said at a protest in New Delhi. 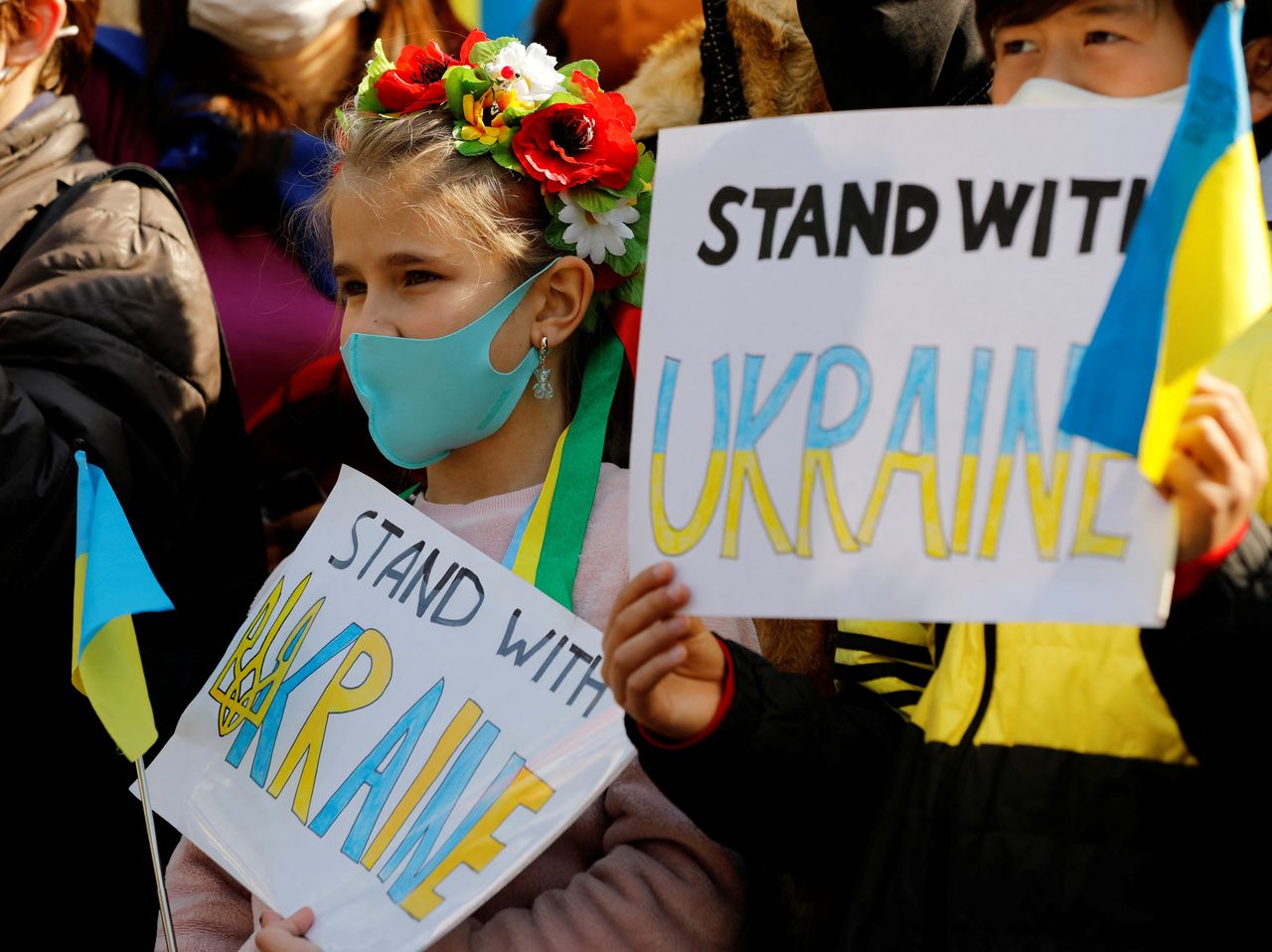 Ukrainian children hold banners during a rally against Russia's invasion of Ukraine, in Tokyo, Japan, February 26, 2022. 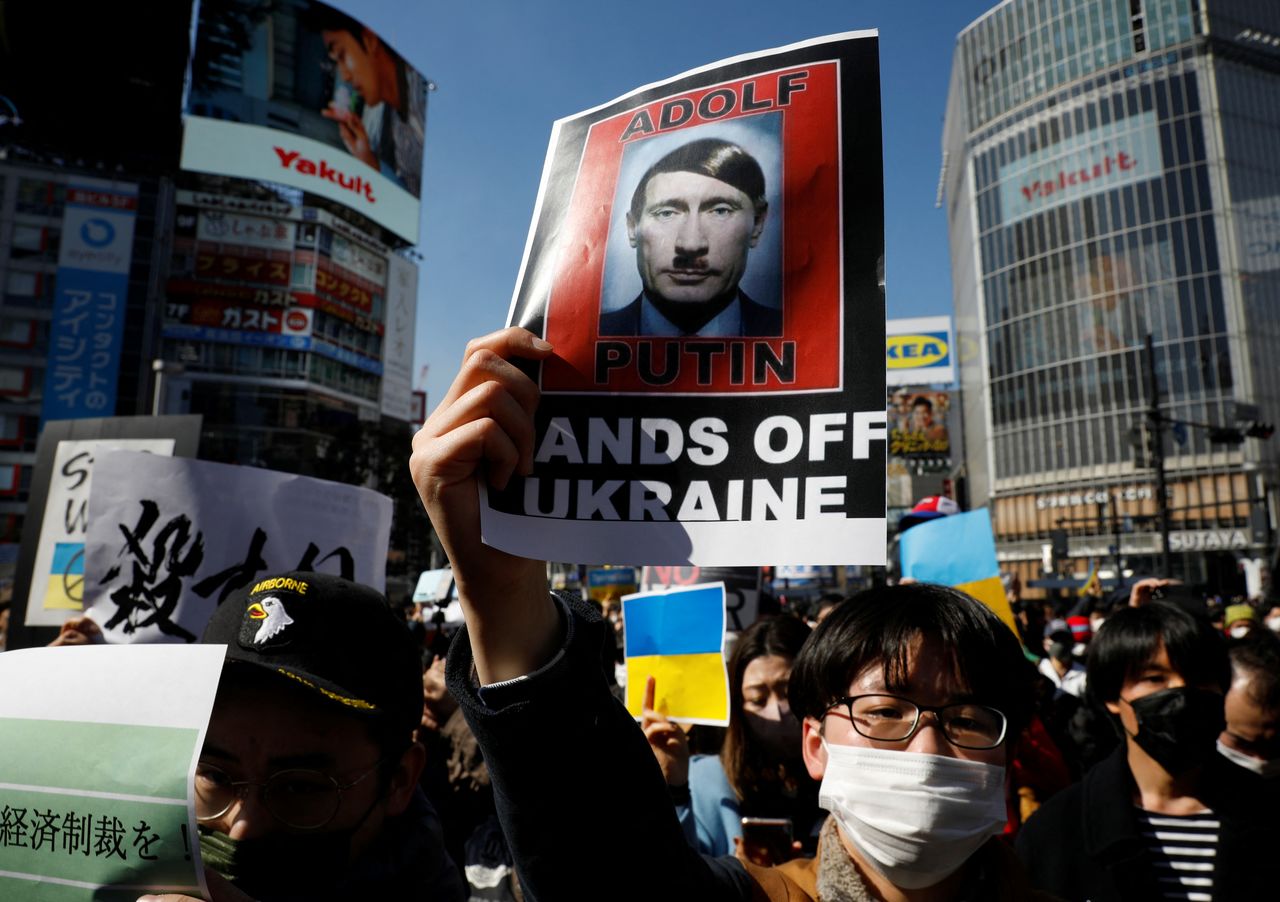 Protesters hold banners during a rally against Russia's invasion of Ukraine, in Tokyo, Japan, February 26, 2022. 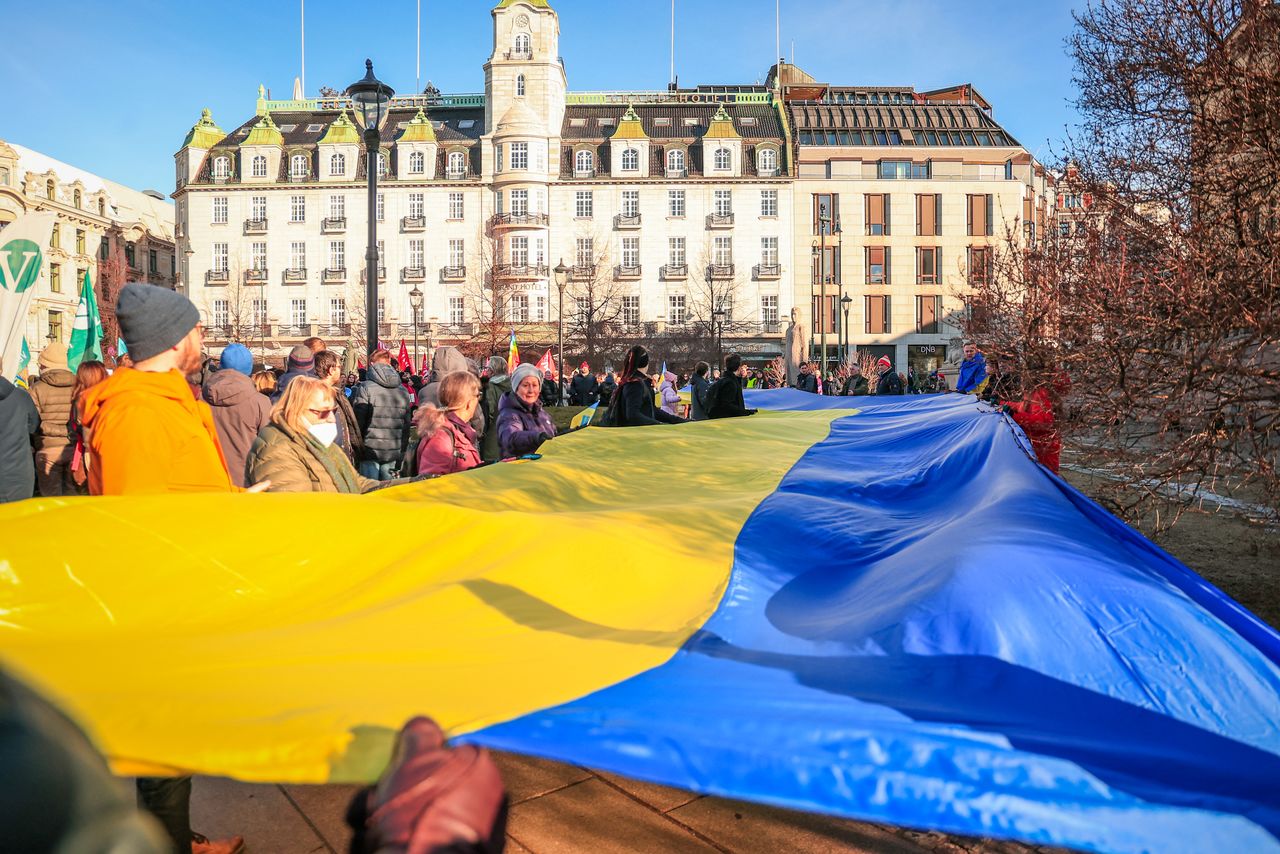 People unfold a flag of Ukraine to protest against Russia's invasion, in front of the Norwegian Parliament in Oslo, Norway, February 26, 2022. NTB/Beate Oma Dahle via REUTERS 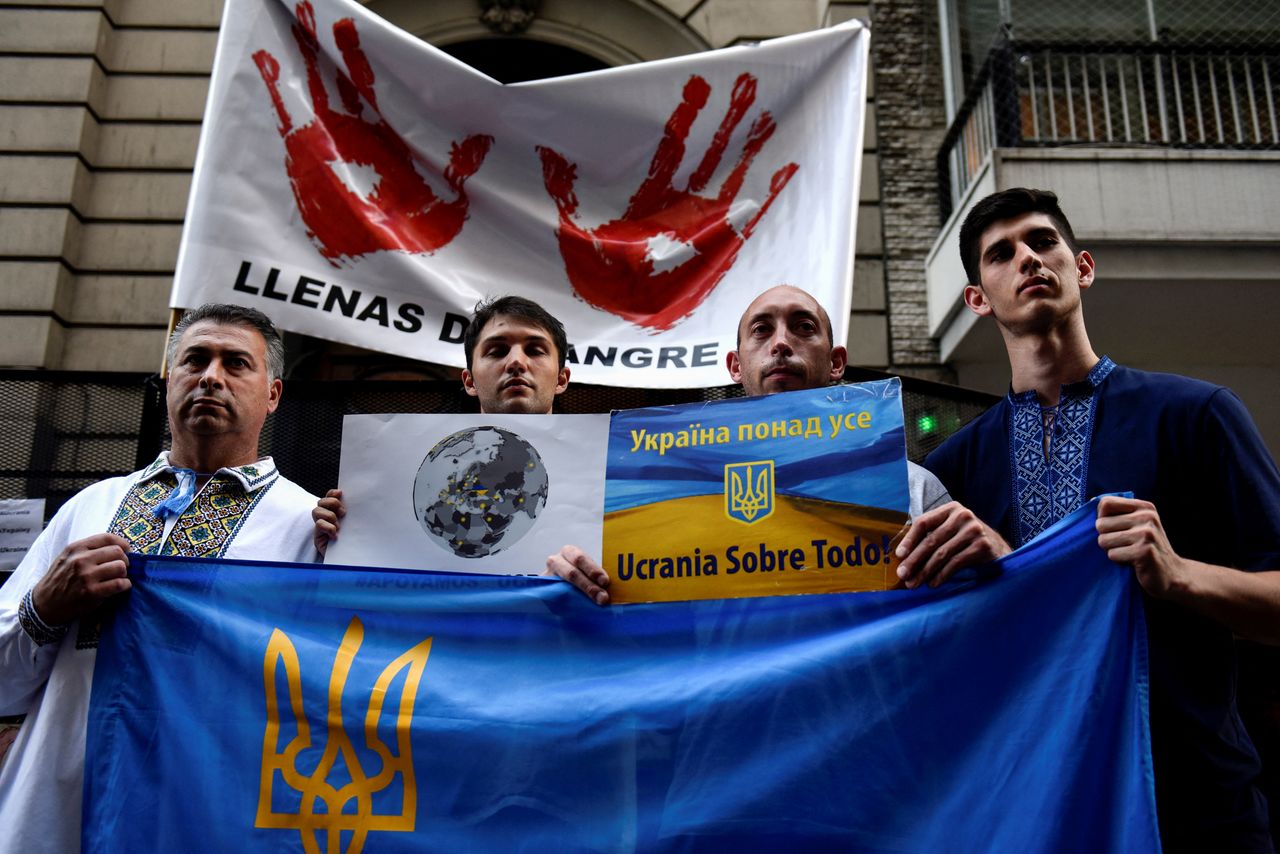 FILE PHOTO: Demonstrators pose in front of a sign reading "Full of blood" during a protest at the Russian Embassy after Russia launched a massive military operation against Ukraine, in Buenos Aires, Argentina February 25, 2022. REUTERS/Mariana Nedelcu 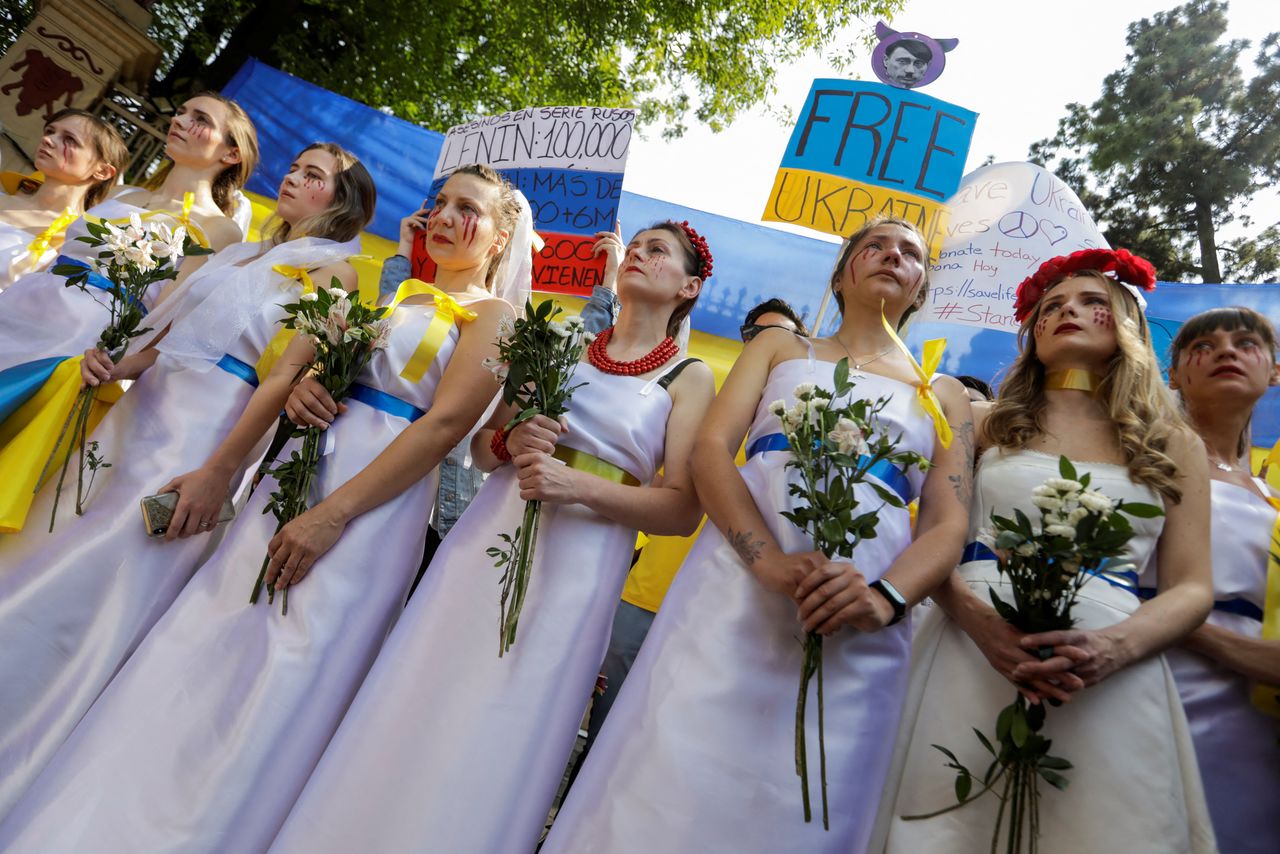