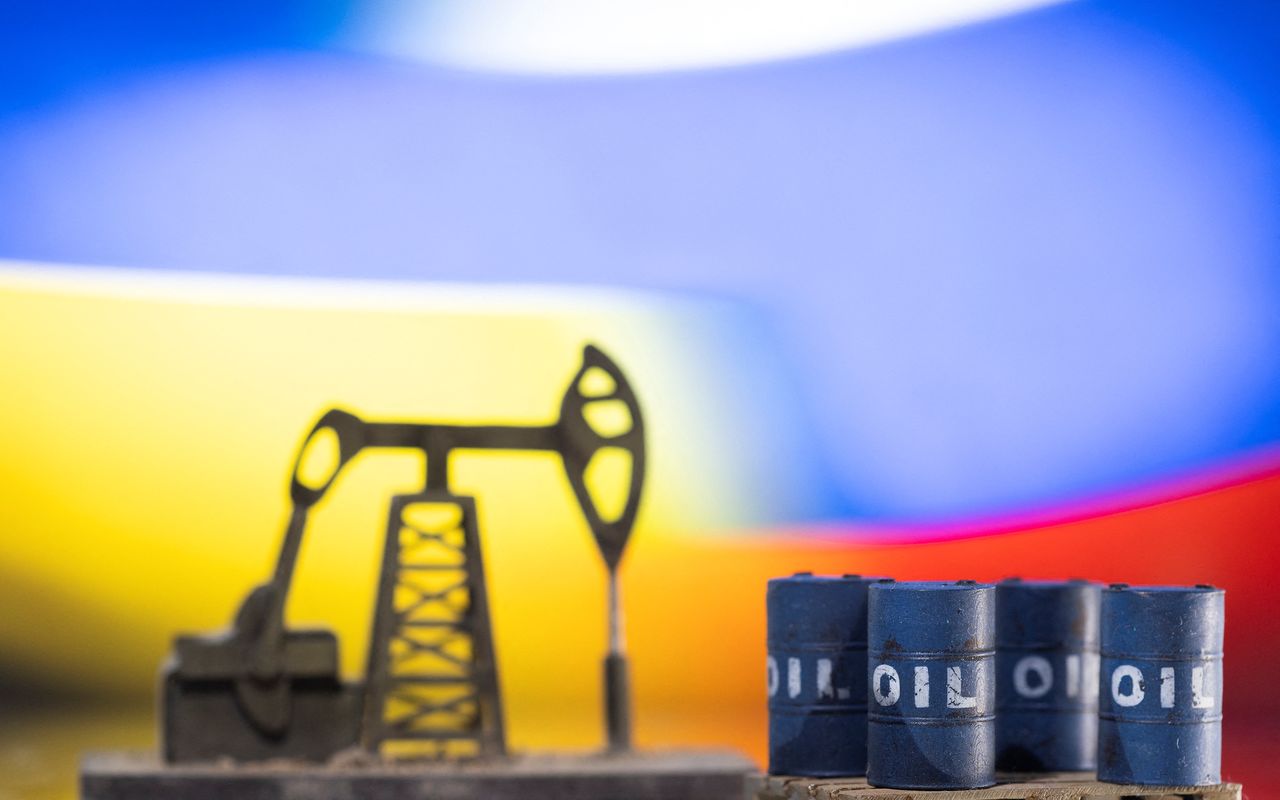 FILE PHOTO: Models of oil barrels and a pump jack are displayed in front of Ukrainian and Russian flag colors in this illustration taken, February 24, 2022. REUTERS/Dado Ruvic/Illustration

(Reuters) - Oil prices jumped on Monday as Western allies imposed more sanctions on Russia and blocked some Russian banks from a global payments system, which could cause severe disruption to its oil exports.

The Brent contract for April delivery expires on Monday. The most active contract, for May delivery, was up $3.14 at $97.26.

Russia is facing severe disruption to its exports of all commodities from oil to grains after Western nations imposed stiff sanctions on Moscow and cut off some Russian banks from the SWIFT international payment system.

"Russia could retaliate to these harsh measures by reducing or even completely suspending energy shipments to Europe," said Commerzbank analyst Carsten Fritsch.

Russian crude oil grades, which account for about 10% of global oil supply, were hammered in physical markets.

Goldman Sachs raised its one-month Brent price forecast to $115 a barrel from $95 previously.

"We expect the price of consumed commodities that Russia is a key producer of to rally from here - this includes oil," the bank said.

Talks between Ukraine and Russia have started at the Belarusian border, a Ukrainian presidential adviser said, aiming to agree to an immediate ceasefire.

"If there's any progress made in this meeting, we're going to see a sharp reversal in markets - we'll see stocks rise, the dollar rise and oil fall," said OANDA analyst Jeffrey Halley.

The sanctions and the exodus of Western oil companies could impact Russian oil production in the near term, analysts said.

Oil prices came under pressure after the Wall Street Journal reported that the United States and other major oil-consuming nations are considering releasing 70 million barrels of oil from their emergency stockpiles.

The Organization of the Petroleum Exporting Countries (OPEC) and allies led by Russia, a group known as OPEC+, are due to meet on Wednesday. The group is expected to stick to plans to add 400,000 barrels per day (bpd) of supply in April.

Ahead of the meeting, OPEC+ revised down its forecast for the oil market surplus for 2022 by about 200,000 bpd to 1.1 million bpd, underscoring market tightness.

(Reporting by Laura Sanicola in New York; Additional reporting by Bozorgmehr Sharafedin and Alex Lawler in London and Sonali Paul in Melbourne; Editing by Sandra Maler and Matthew Lewis)