KYIV/MOSCOW (Reuters) -President Volodymyr Zelenskiy urged the West to consider a no-fly zone for Russian aircraft over Ukraine on Monday after Moscow bombarded the country's second largest city, drawing new sanctions by the United States and its allies.

Russia faces increasing international isolation over its invasion of Ukraine, and hours of negotiations between the two sides on Monday failed to reach a breakthrough to halt the fighting.

Ukrainian officials said Russian attacks in Kharkiv, a city of 1.4 million people, had killed civilians, including children. In a video address, Zelenskiy said it was time to block Russian missiles, planes and helicopters from Ukraine's airspace.

"Fair negotiations can occur when one side does not hit the other side with rocket artillery at the very moment of negotiations," Zelenskiy said. He did not specify how and by whom a no-fly zone would be enforced.

The United States has ruled out sending troops to fight Russia and officials have voiced concern about further escalating tensions between the world's two biggest nuclear powers.

Such a move would require "deploying U.S. military to enforce, which would be... potentially a direct conflict, and potentially a war with Russia, which is something we are not planning to be a part of."

Western nations, united in condemnation of Russia's assault, have hit Russia with sanctions, with targets including President Vladimir Putin and his confidants.

But Putin has shown no sign of reconsidering the invasion he unleashed on Russia's neighbour last Thursday in an attempt to redraw Europe's security map and pull Ukraine firmly into its orbit.

Asked at the White House on Monday if Americans should worry about nuclear war, U.S. President Joe Biden said: "No."

But in a sign of souring relations, the United States expelled 12 Russian diplomats at the United Nations, citing national security concerns. Russia described the move as "hostile."

The Russian invasion - the biggest assault on a European state since World War Two - has failed to achieve the decisive early gains that Putin would have hoped for.

Kharkiv in Ukraine's northeast has become a major battleground. Oleg Synegubov, Kharkiv's regional administration chief, said Russian artillery had pounded residential districts even though no Ukrainian army positions or strategic infrastructure were there. At least 11 people were killed, he said.

"This is happening in the daytime, when people have gone out to the pharmacy, for groceries, or for drinking water. It's a crime," he said.

Kharkiv's mayor, Igor Terekhov, said four people had died after emerging from a bomb shelter to collect water, and that a family with three children had burned to death in a car.

Moscow's United Nations ambassador, speaking in New York, said the Russian army did not pose a threat to civilians.

Images from the U.S. satellite company Maxar showed a Russian military convoy stretching over 17 miles (27 km) and moving closer to the capital, Kyiv, which remains under Ukrainian government control.

On Kyiv's streets, signboards normally used for traffic alerts showed the message: "Putin lost the war. The whole world is with Ukraine."

Talks between the two sides were held on the border with strong Russian ally Belarus - a launch pad for invading Russian troops.

Ukraine had said it wanted to secure an immediate ceasefire and the withdrawal of Russian forces. The Kremlin declined to comment on its goals.

The meeting ended with officials heading back to capitals for further consultations before a second round of negotiations, Ukrainian presidential adviser Mykhailo Podolyak told reporters.

"The Russian side, unfortunately, still has a very biased view of the destructive processes it has launched," Podolyak tweeted.

Russian delegation head Vladimir Medinsky told reporters: "The most important thing is that we agreed to continue negotiating."

The Western-led response has been emphatic, with sanctions that effectively cut off Moscow's financial institutions from Western markets.

The United States imposed new sanctions on Russia's central bank and other sources of wealth on Monday, and many Western companies began to disentangle themselves from their Russian operations.

Over the weekend, some Russian banks were barred from the SWIFT international payments system.

The European Union placed new sanctions on Russian oligarchs and officials and some of its members urged the bloc to begin talks on Ukrainian accession. Zelenskiy signed a letter formally requesting EU membership, an emphatic statement of commitment to Western values.

Putin dismissed the West as an "empire of lies" and replied to the new sanctions with moves to shore up Russia's crumbling rouble currency, which plunged 32% against the dollar before recouping about half of its losses.

Russia's central bank cranked up its key interest rate to 20% from 9.5%. Authorities told export-focused companies to be ready to sell foreign currency.

U.N. human rights chief Michelle Bachelet said at least 102 civilians in Ukraine had been killed since Thursday but the real figure could be "considerably higher."

More than half a million people have fled to neighbouring countries, according to the U.N. refugee agency.

The Kremlin accused the EU of hostile behaviour, saying weapons supplies to Ukraine were destabilising and proved that Russia was right in its efforts to demilitarise its neighbour.

But there was support for Ukraine from unexpected quarters.

U.S. technology firm Microsoft said it had provided threat intelligence and defensive suggestions to Ukrainian officials about attacks on a range of targets, and also advised the government about attempted cyberthefts of data.

And European soccer's governing body, UEFA, scrapped sponsorship by the Russian state gas giant Gazprom reported to be worth 40 million euros ($45 million) a season, and UEFA and the global federation FIFA suspended all Russian teams until further notice. 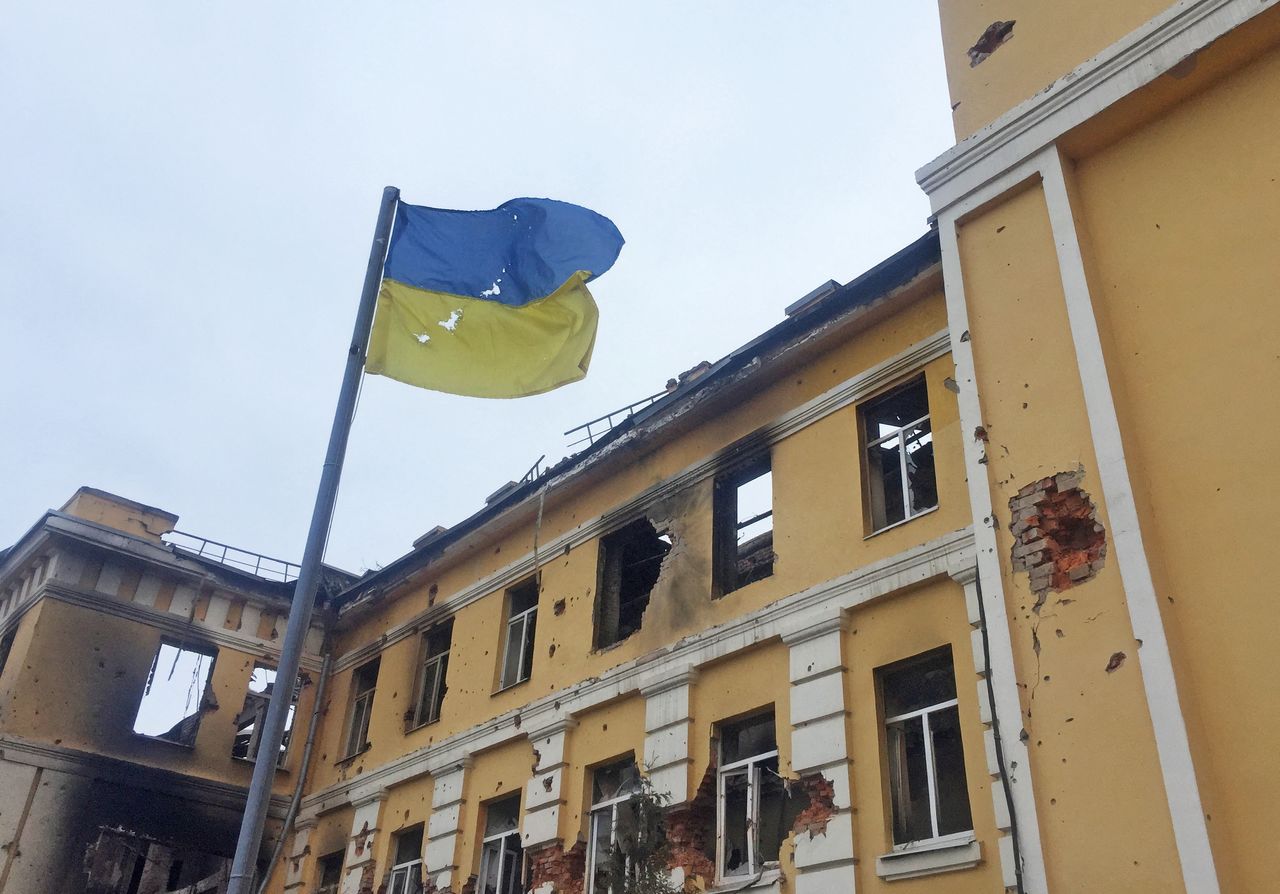 The Ukrainian national flag is seen in front of a school which, according to local residents, was on fire after shelling, as Russia's invasion of Ukraine continues, in Kharkiv, Ukraine February 28, 2022. REUTERS/Vitaliy Gnidyi 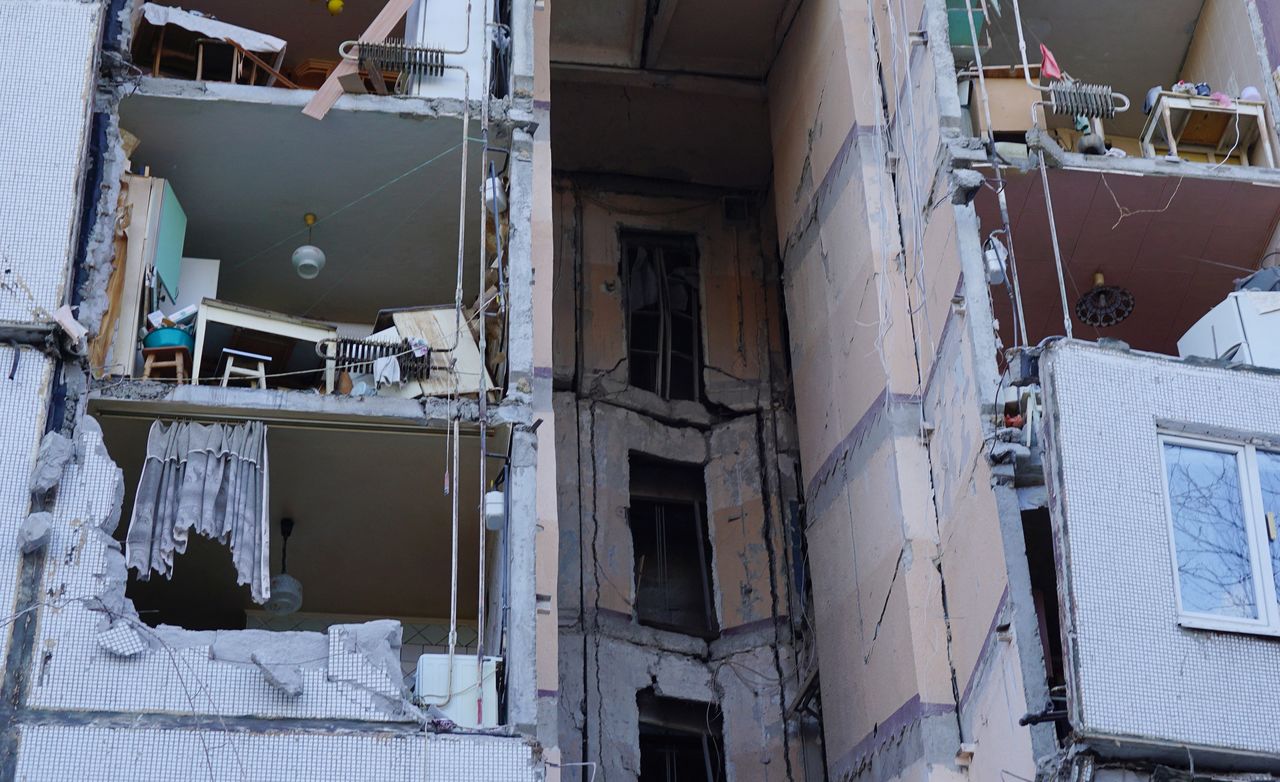 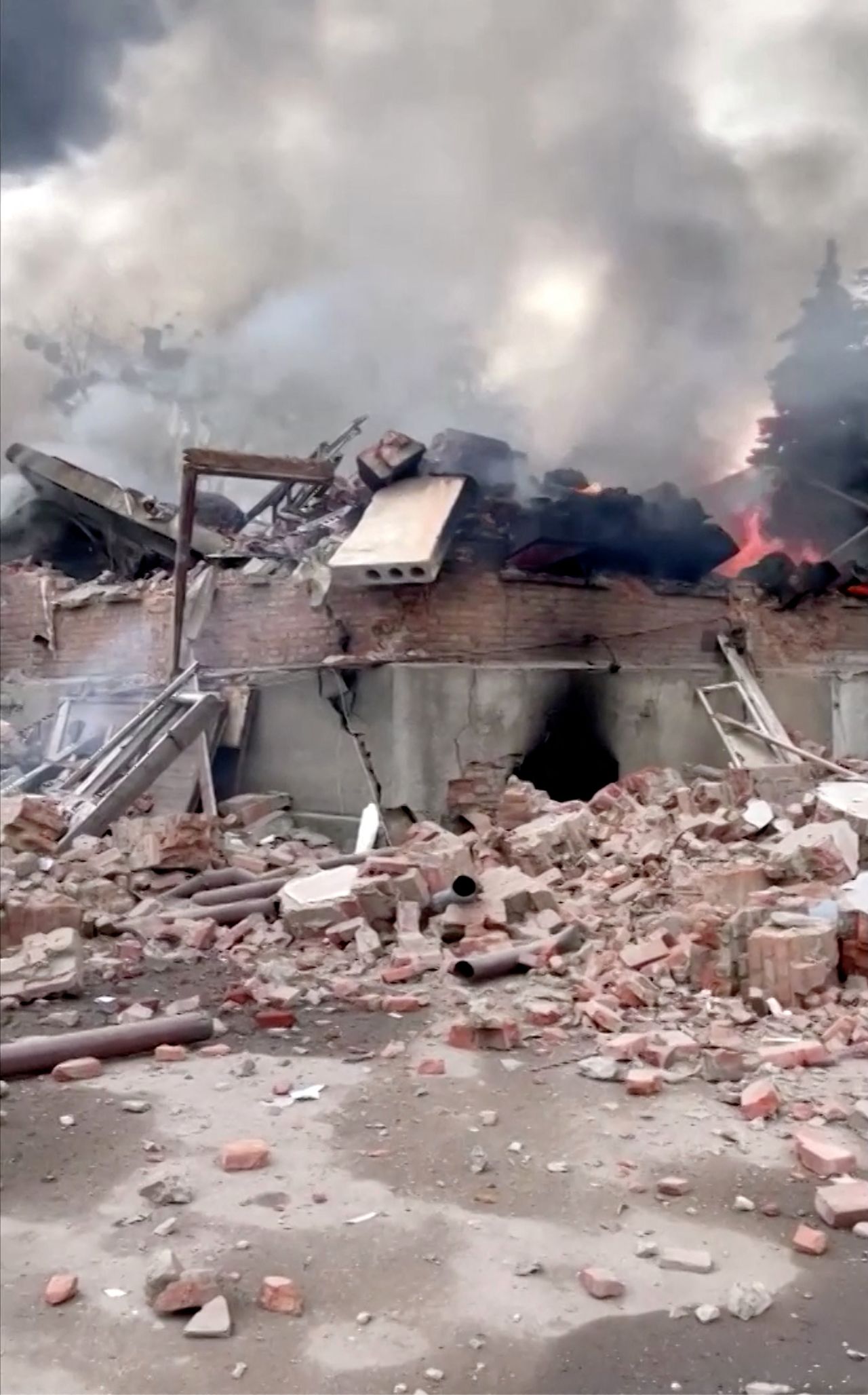 A general view of a destroyed factory building in Kharkiv, Ukraine February 28, 2022 in this still image obtained by Reuters from a video. THIS IMAGE HAS BEEN SUPPLIED BY A THIRD PARTY. 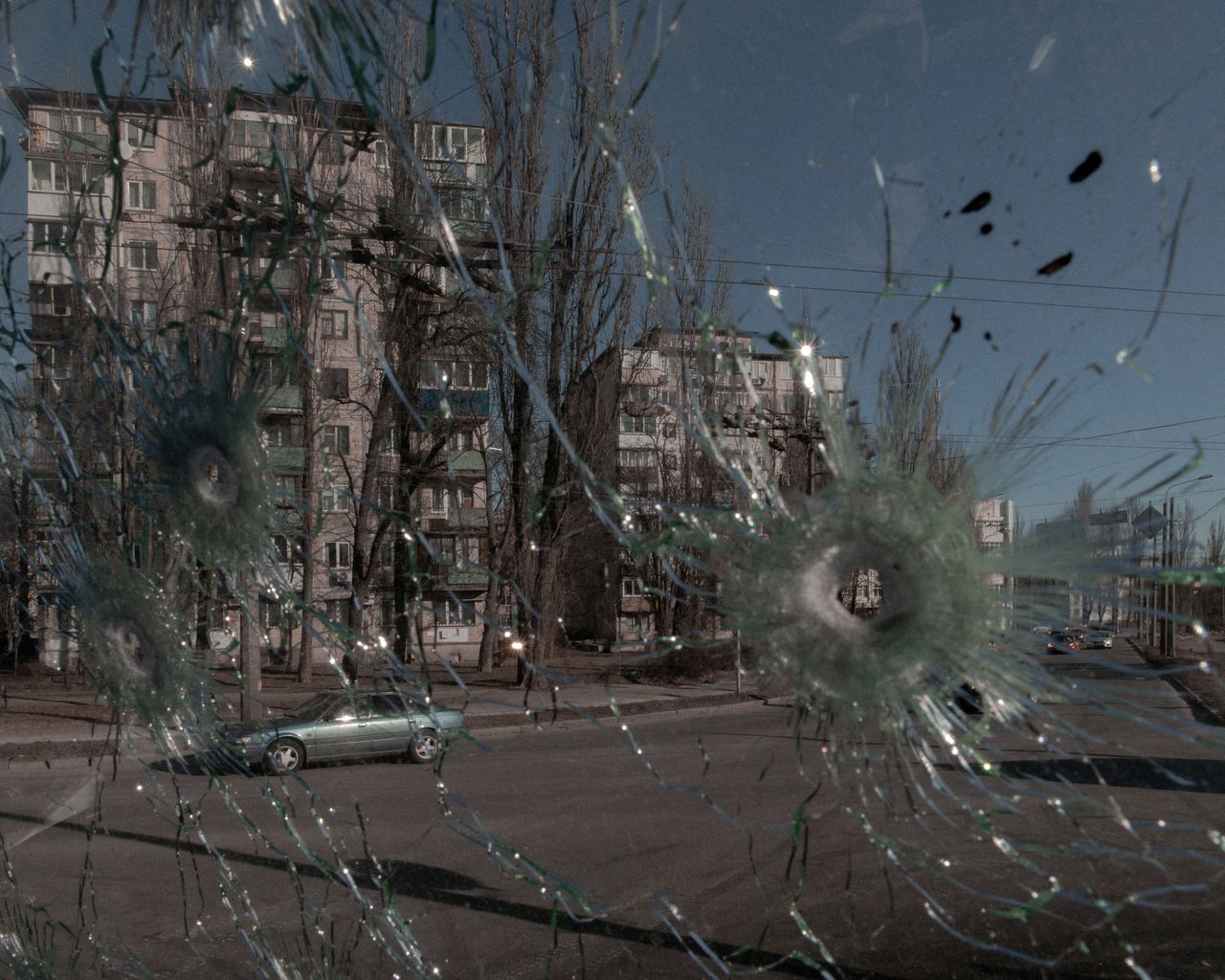 Cars are seen through the damaged window of a vehicle hit by bullets, as Russia's invasion of Ukraine continues, in Kyiv, Ukraine February 28, 2022. Jedrzej Nowicki/Agencja Wyborcza.pl via REUTERS 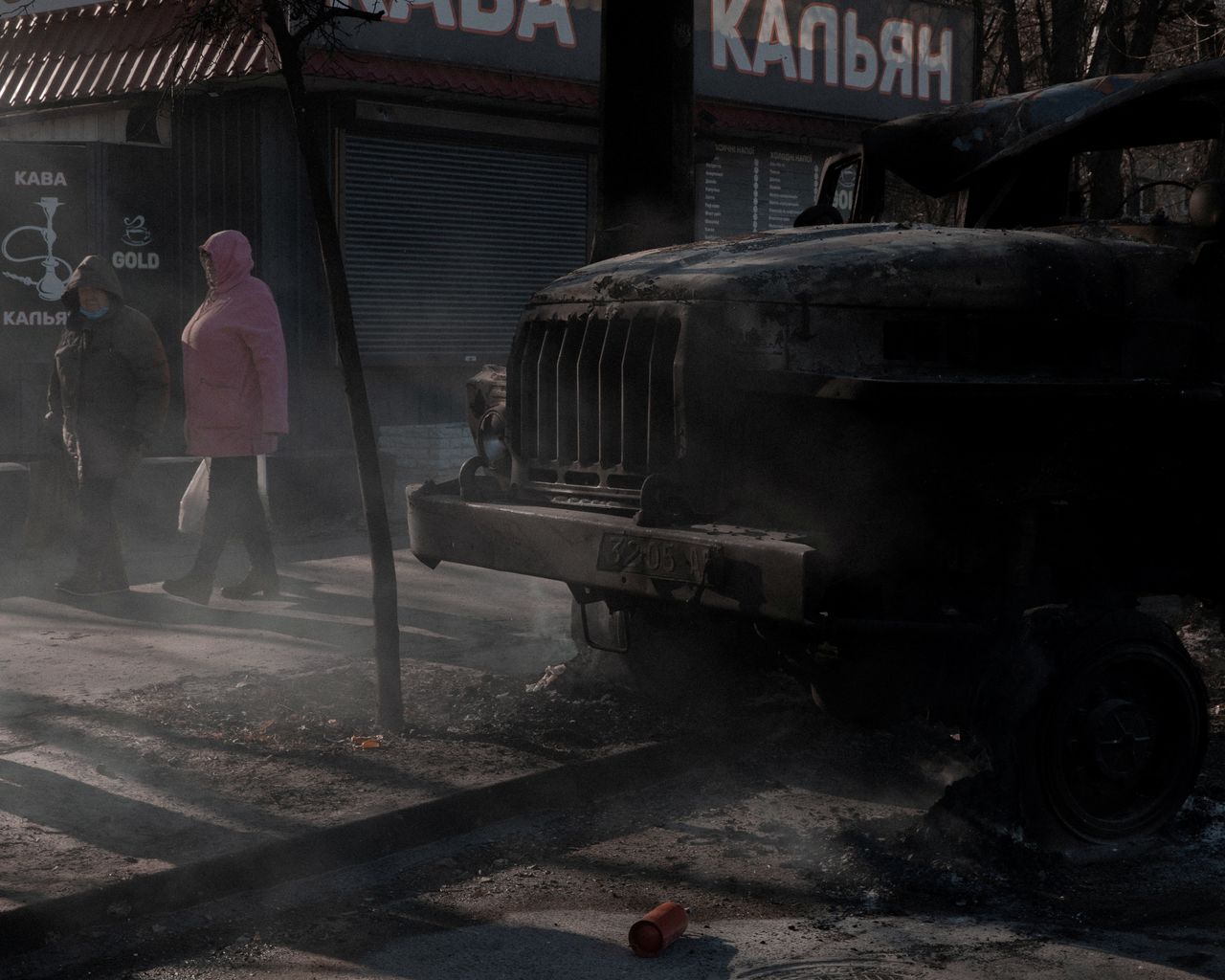 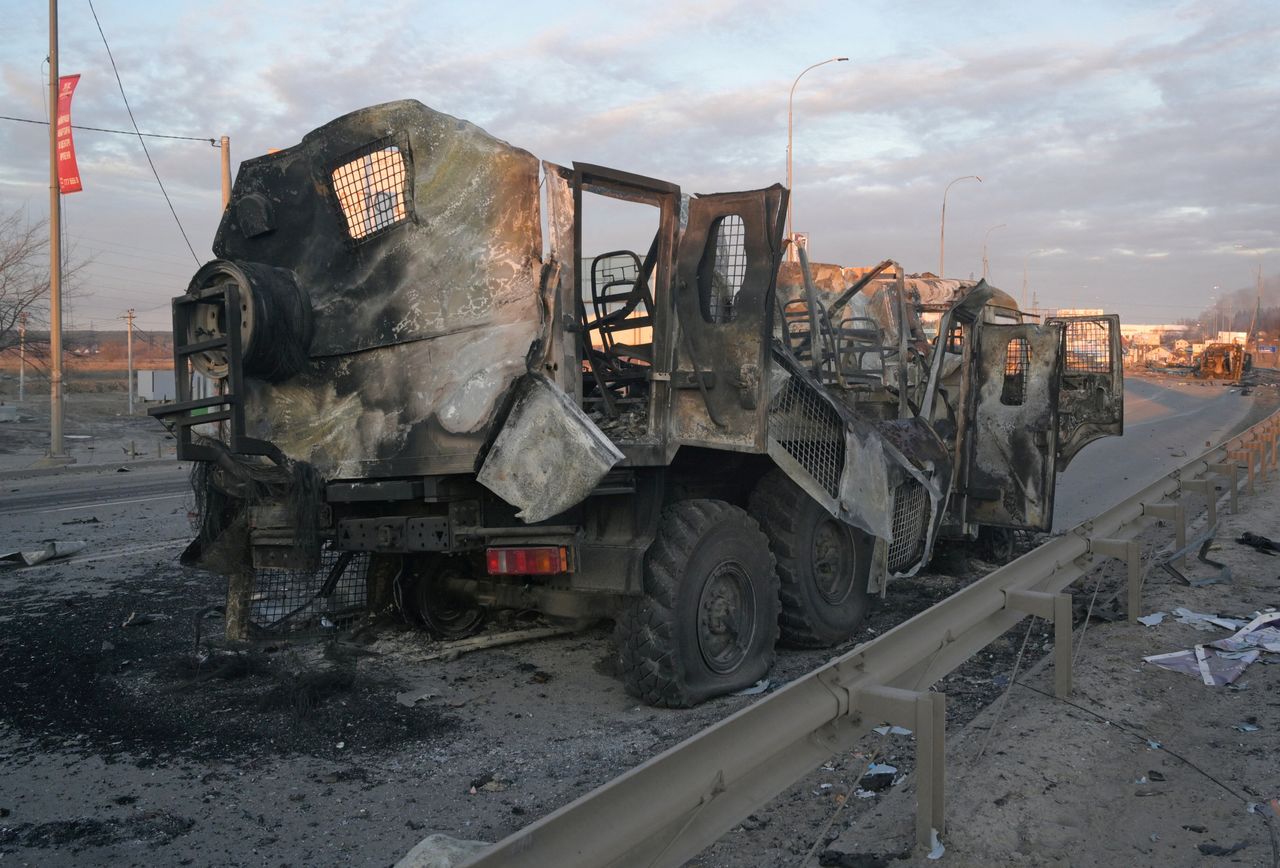 A charred military vehicle is seen on a road, as Russia's invasion of Ukraine continues, near the town of Bucha in the Kyiv region, Ukraine February 28, 2022. REUTERS/Maksim Levin 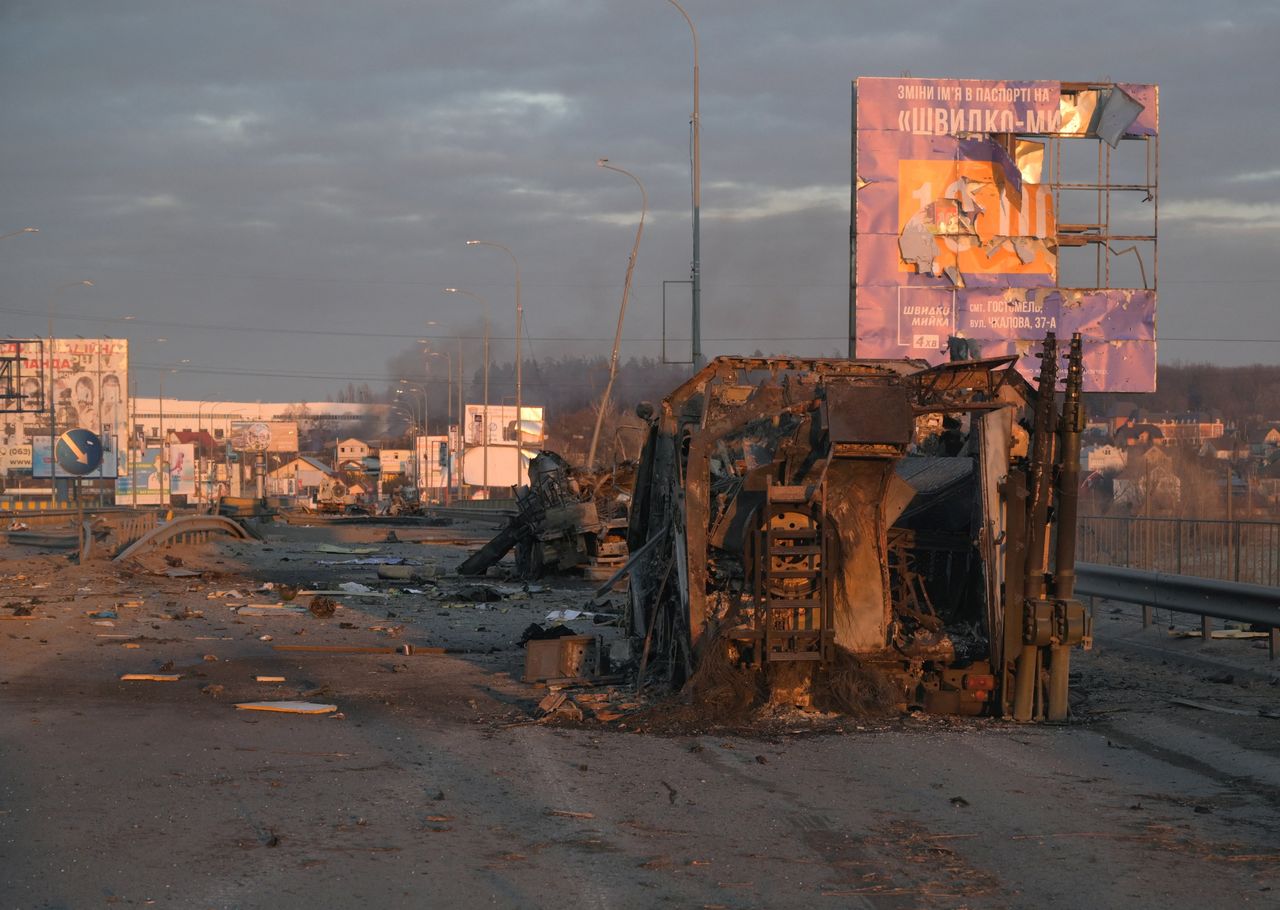 Charred military vehicles are seen on a road, as Russia's invasion of Ukraine continues, near the town of Bucha in the Kyiv region, Ukraine February 28, 2022. REUTERS/Maksim Levin 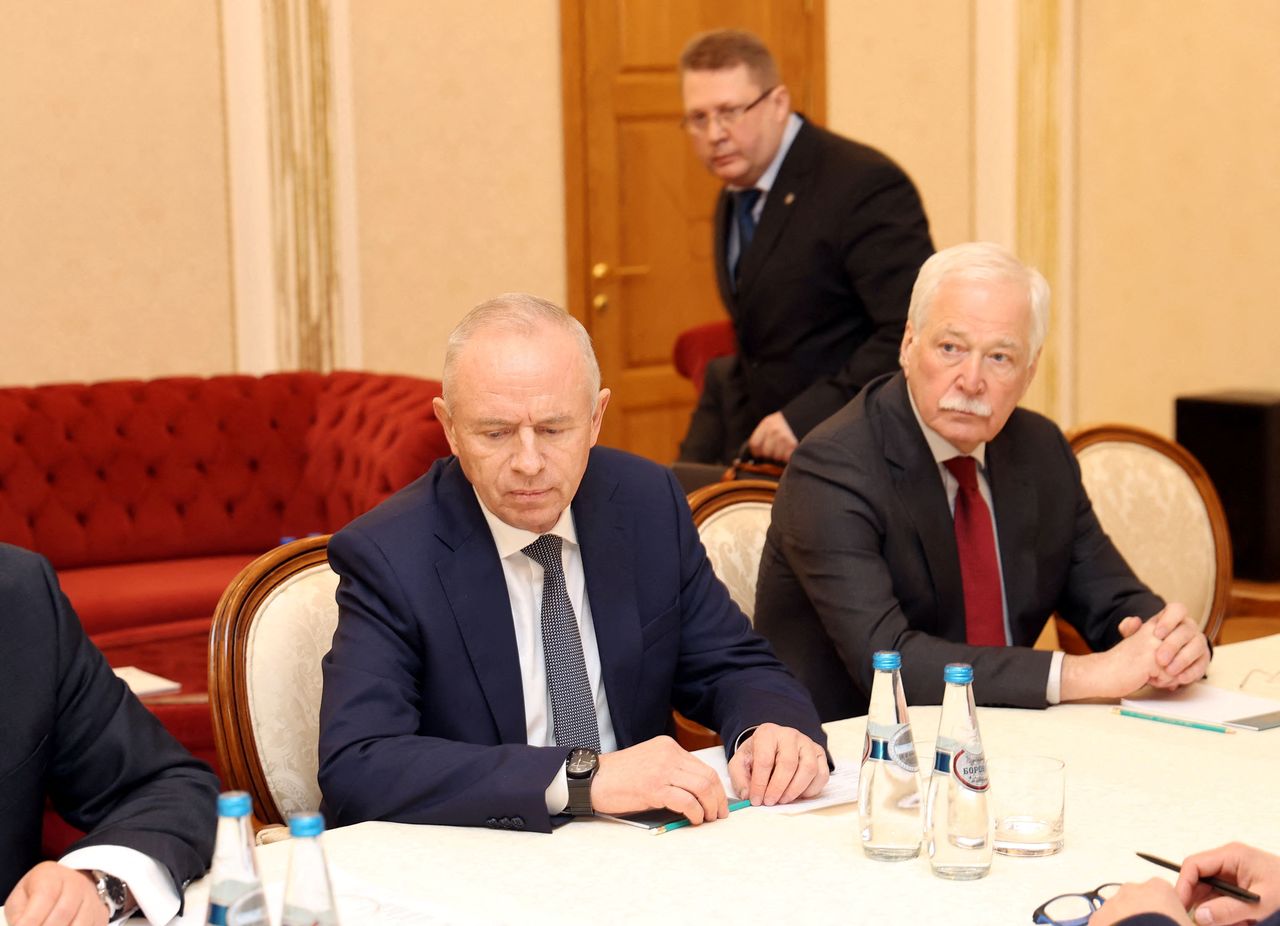 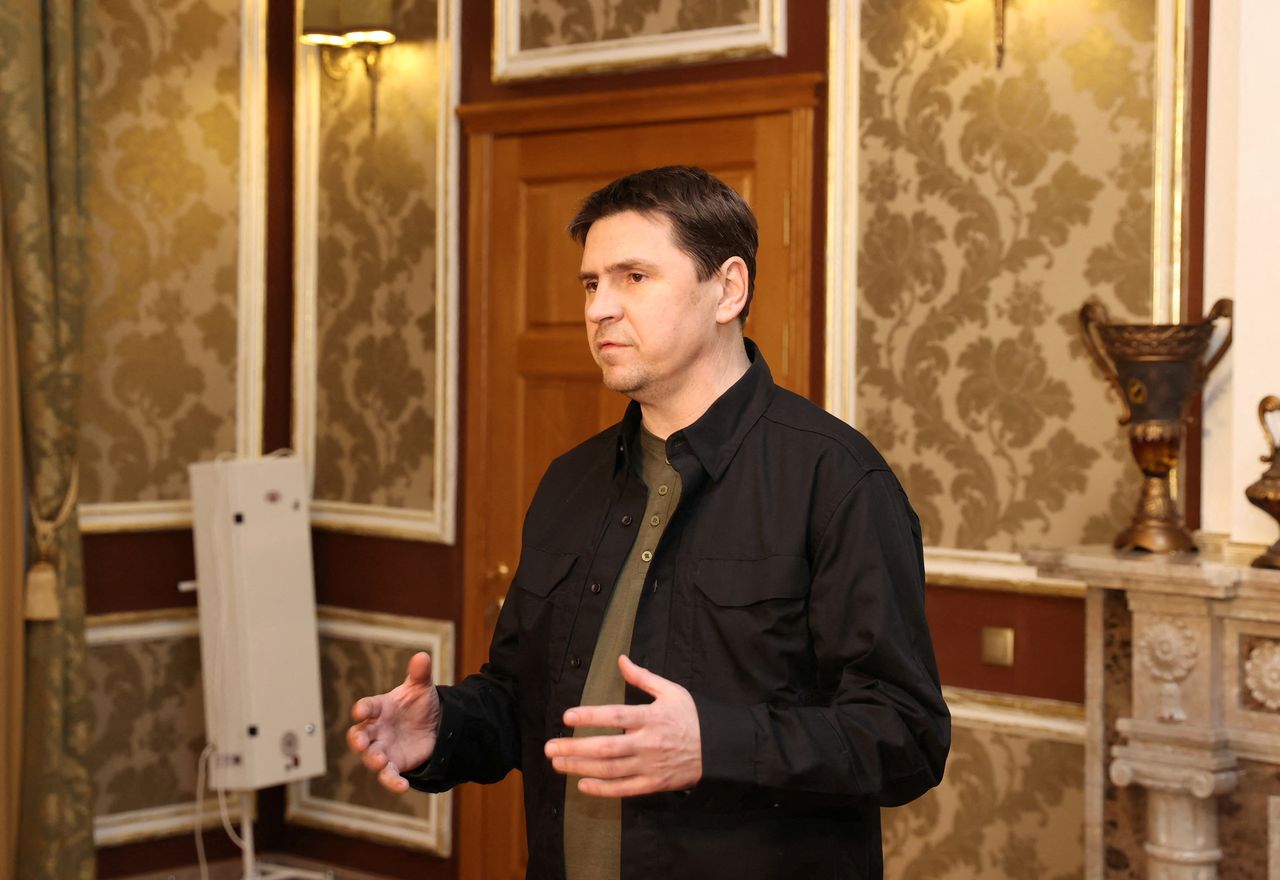 Ukraine's presidential advisor Mykhailo Podolyak from the Ukrainian delegation speaks after the talks in the Gomel region, Belarus February 28, 2022. Sergei Kholodilin/BelTA/Handout via REUTERS 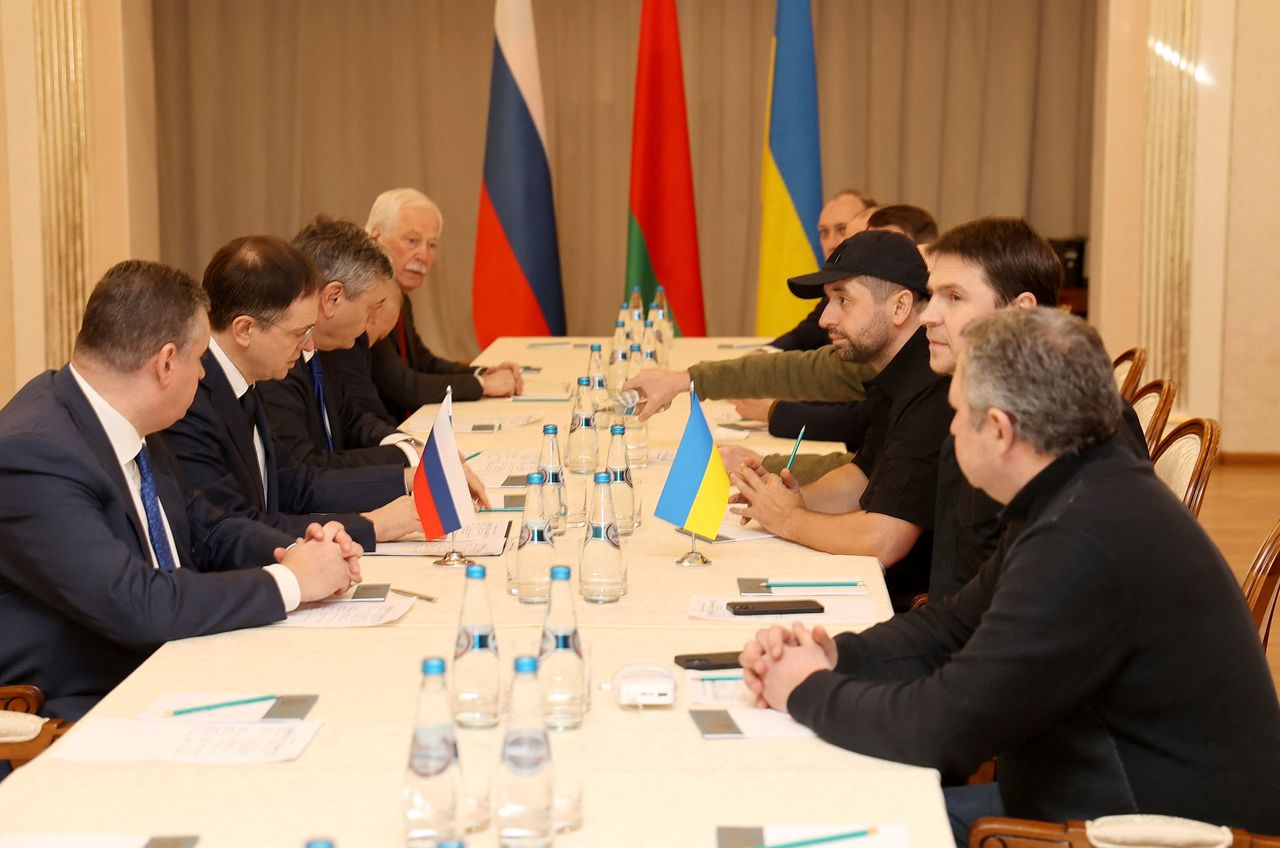 Russian and Ukrainian officials take part in the talks in the Gomel region, Belarus February 28, 2022. Sergei Kholodilin/BelTA/Handout via REUTERS 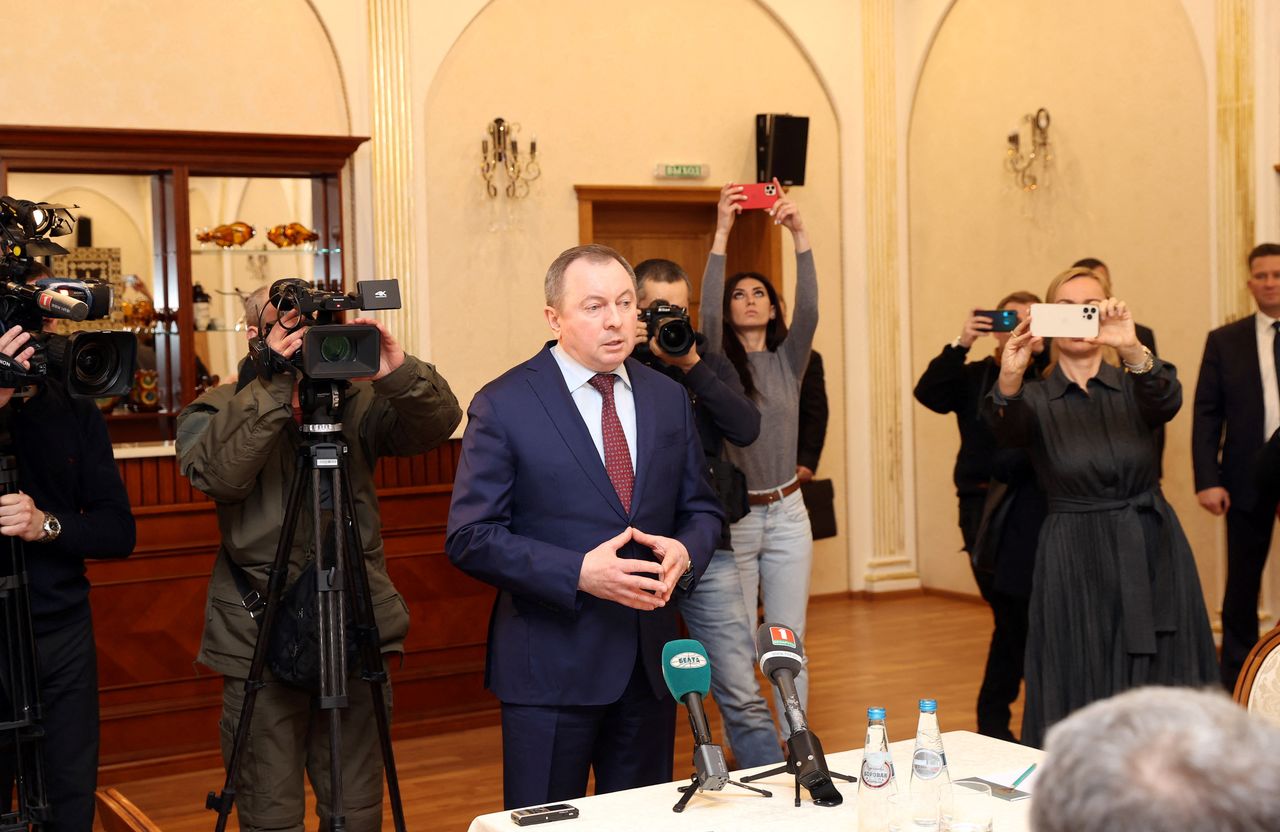 Belarusian Foreign Minister Vladimir Makei makes a statement before the talks between Russian and Ukrainian officials in the Gomel region, Belarus February 28, 2022. Sergei Kholodilin/BelTA/Handout via REUTERS 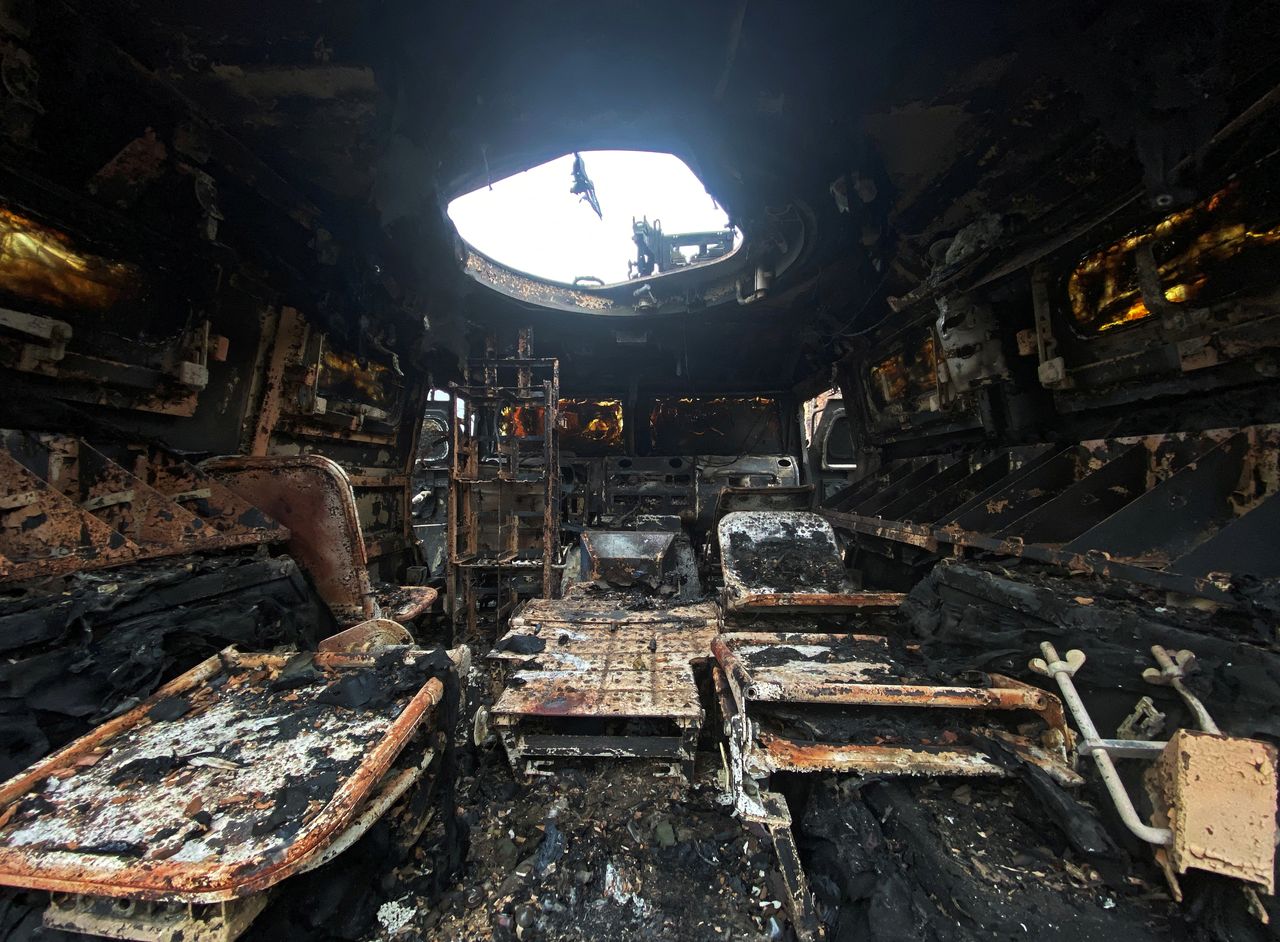 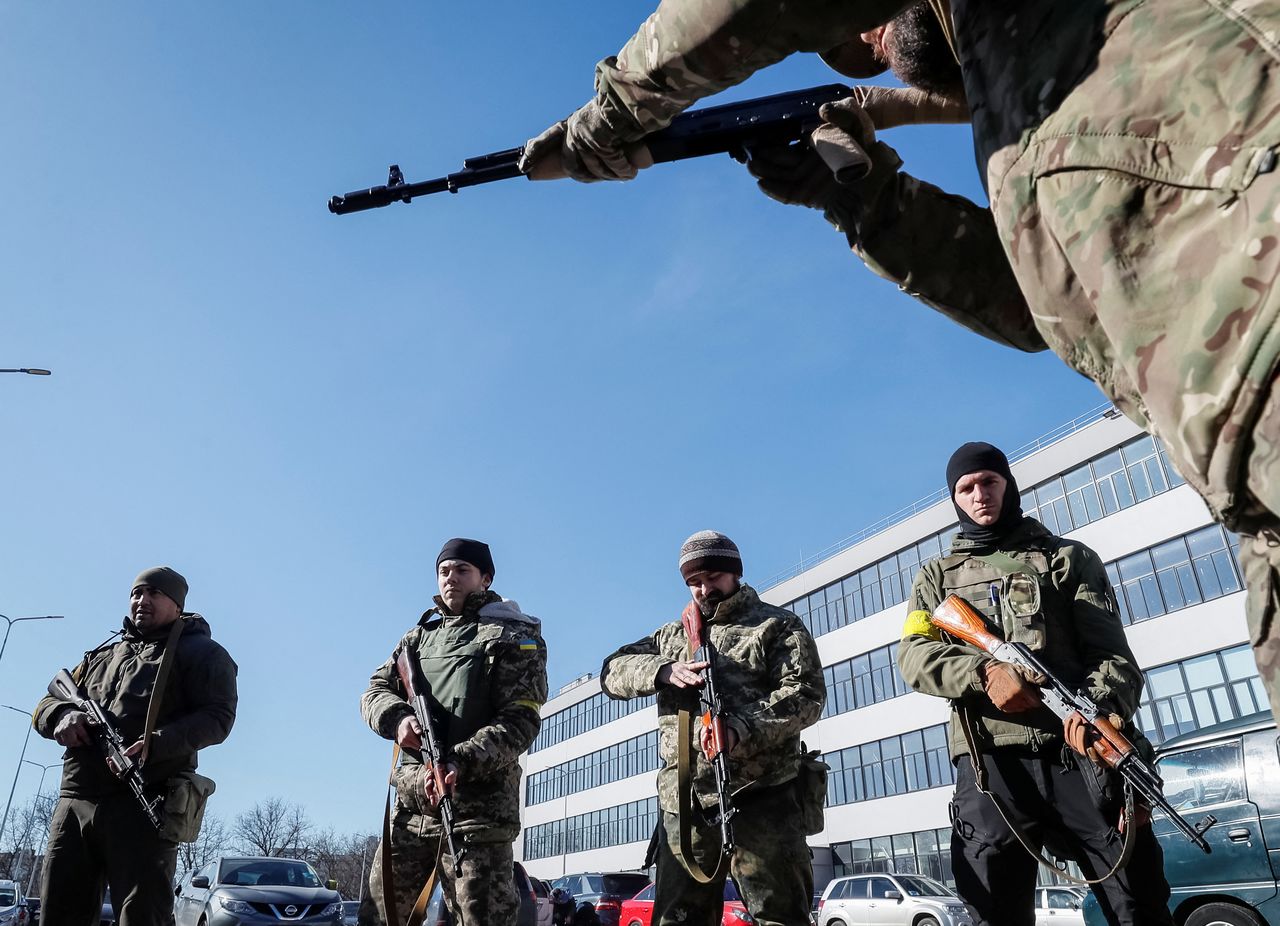 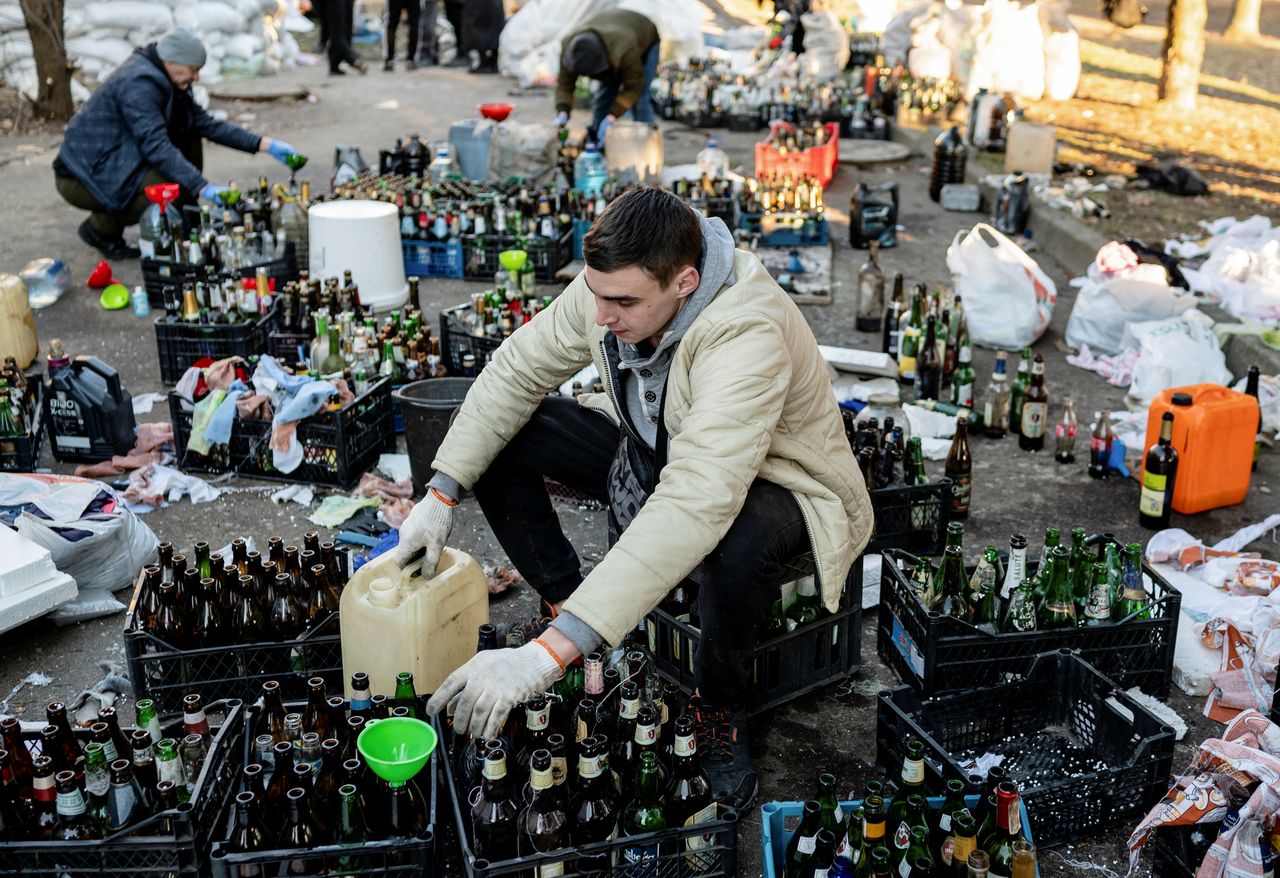