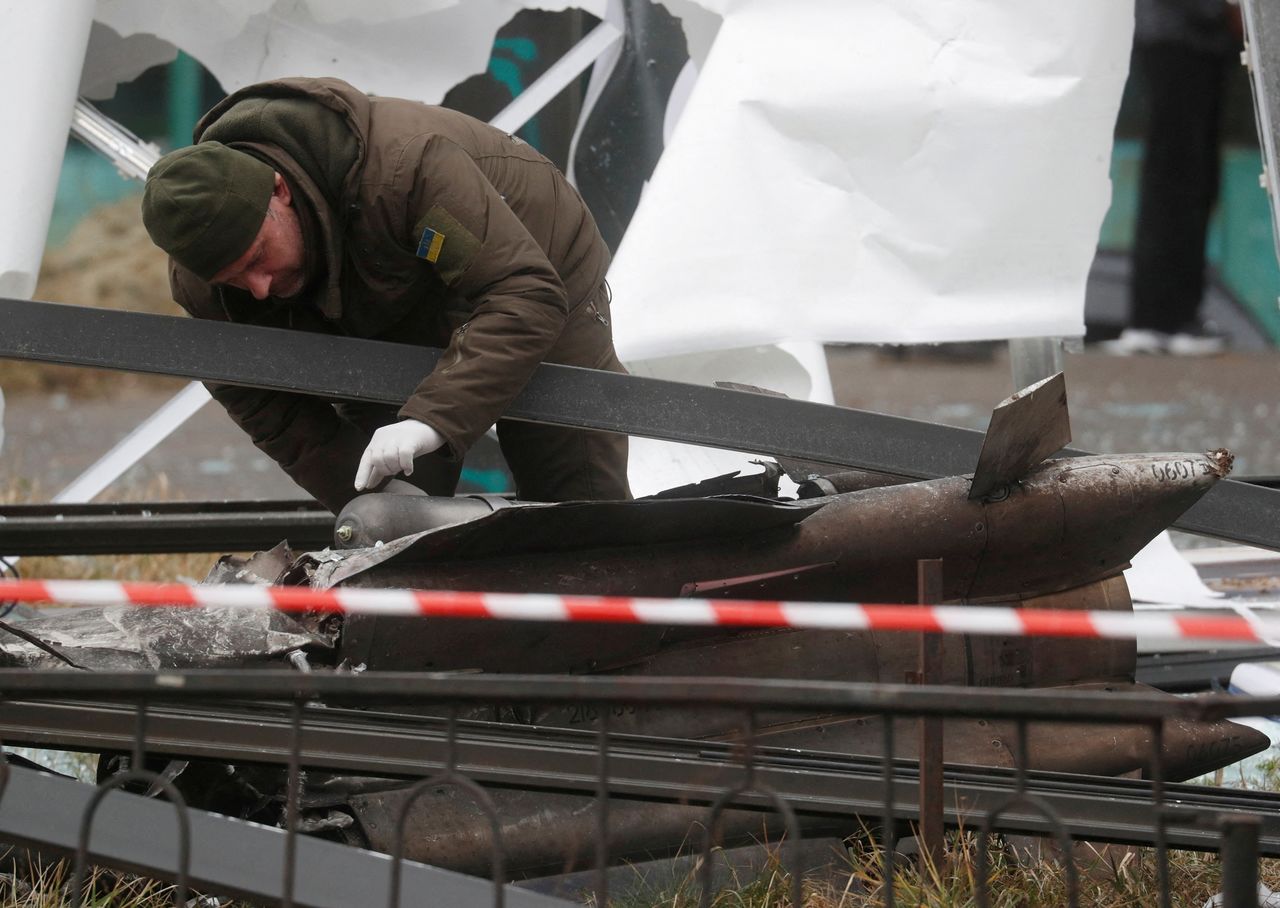 FILE PHOTO: A police officer inspects the remains of a missile that landed in the street, after Russian President Vladimir Putin authorized a military operation in eastern Ukraine, in Kyiv, Ukraine February 24, 2022. REUTERS/Valentyn Ogirenko/File Photo

(Reuters) - Russia has employed hundreds of powerful and precise ballistic missiles in the first days of its Ukraine attack, but analysts and U.S. officials say many Ukrainian defences remain intact - effects that countries around the world are watching closely.

The use of short-range ballistic missiles (SRBMs) is likely being watched closely as a real-world case study by China, North Korea, and other countries that have been developing increasingly advanced arsenals of such weapons in recent years. And Western governments who see Russia as an adversary are eager to gather data on the missiles' effects in combat.

Russia had fired more than 320 missiles as of Sunday morning, with the majority of them SRBMs, a U.S. official told reporters.

According to U.S. estimates, the initial hours of the Russian onslaught last week included more than 100 missiles launched from land and sea, mostly SRBMs but also cruise missiles and surface-to-air missiles.

That would make it the most intense SRBM bombardment between two territorial contiguous states in a conflict, said Ankit Panda, a senior fellow at the U.S.-based Carnegie Endowment for International Peace.

"What we’ve seen in Ukraine corresponds to how many military establishments in many countries, including China and North Korea, may think of using precision ballistic missiles in future conflicts," he said.

Russia most likely used its only SRBM in active service, the Iskander-M, said Timothy Wright, a research analyst with the International Institute for Strategic Studies (IISS).

First used in combat in 2008 in Georgia, the Iskander is designed to confound missile defences by flying on a low trajectory and manoeuvring in flight to strike targets as far out as 500km with an accuracy of 2-5 metres, according to the Center for Strategic and International Studies (CSIS).

"It is likely to be able to accurately target and destroy what it is being fired at," Wright said, adding that Russia appears to possess around 150 launchers, which can also fire cruise missiles.

There also appears to be evidence that Russia has used the OTR-21 Tochka SRBM, which was believed to have been retired, he said. "If these were in storage, Russia may have decided to put them to use, rather than scrap them."

What the missiles targeted and how much damage they caused remains unclear amid the confusion of the developing war, but analysts said there appear to have been some strikes on Ukrainian air bases.

Iskander missiles launched from Belarus had hit an airport in Zhytomyr in northern Ukraine on Sunday, an adviser to Ukraine's interior minister said.

"We see some damage at airports, and it looks fairly accurate," said Jeffrey Lewis, a missile researcher at the James Martin Center for Nonproliferation Studies (CNS).

Some strikes by unknown weapons at air bases appeared relatively limited in scope, however, and in some instances potentially misplaced, such as hitting stored rather than operational aircraft, said Joseph Dempsey, a defence researcher at IISS.

Ukraine has the Cold War-era Russian-made S-300v anti-aircraft missile system, which also has anti-ballistic missile capabilities, Wright said. It is unclear whether any engaged the Russian missiles, and some S-300v vehicles appeared to have been destroyed by strikes, he added.

The U.S. official said on Sunday that there were indications that some Russian missiles experienced launch failures.

"It's not the majority," the official said. "But we do believe that some number of their launches have not been successful."

Russia has not demonstrated its full air and missile capabilities and will most likely increase its waves of strikes in the coming days to degrade Ukraine’s surviving defences, including anti-aircraft units that have shot down several Russian aircraft, the U.S.-based Institute for the Study of War said in a report.

Some of Russia's hesitancy could be due to a lack of real-time reconnaissance and targeting data, but given the number of static targets, a more likely explanation is a desire to minimize casualties among Ukrainians, said Dmitry Stefanovich, a weapons researcher at Moscow's Institute of World Economy and International Relations.

"While Iskander-M is a very capable and precise system, the probability of collateral damage, obviously, increases with the number and intensity of weapons used," he said. "If any takeaway is relevant for other SRBM-owning states, it is that those can be employed in limited manner and cautiously, an all-in salvo is not the only option."

As the heir to the former Soviet Union's substantial missile arsenal, Russia boasts the widest inventory of ballistic and cruise missiles in the world, according to CSIS.

But other countries are buying or developing their own new missiles, driven by security concerns and a desire to reduce reliance on other suppliers.

Before the decade is out, Asia in particular will be bristling with conventional missiles that fly farther and faster, hit harder, and are more sophisticated than ever before.

China is mass producing its DF-26 - a multipurpose weapon with a range of up to 4,000 kilometres - while the United States is developing new weapons aimed at countering Beijing in the Pacific.

Taiwan and Japan are also boosting their missile capabilities, as well as defence systems designed to counter missile threats.

Although it hasn't tested its longest-range intercontinental ballistic missiles (ICBMs) since 2017, North Korea has rolled out a flurry of new SRBMs, including one that appears influenced by the Iskander's design.

Like the Iskander, North Korea's latest missiles - including "hypersonic" weapons tested in January - are designed to be faster and more manoeuvrable than older weapons, enabling them to potentially evade missile defences.

Analysts say that although such SRBMs can't reach the United States, they would likely be used in the first wave if a war broke out, striking nearby air defences, air bases, and other targets similar to the way Russia used its missiles in the ongoing invasion.