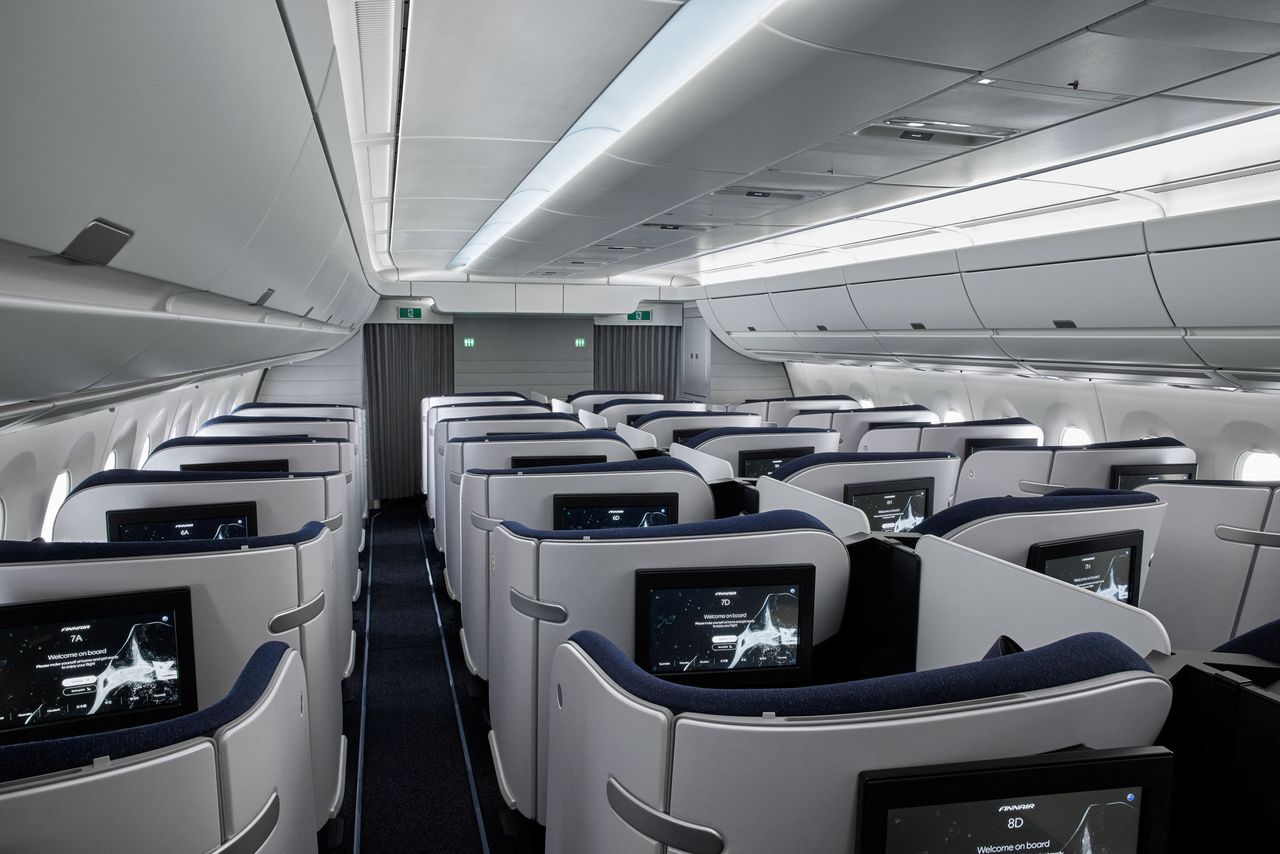 A general view of the business class cabin of a Finnair A350 aircraft is pictured in Helsinki, Finland December 3, 2021. Finnair/Handout via REUTERS

HELSINKI/PARIS/CHICAGO (Reuters) -Airlines are bracing for potentially lengthy blockages of key east-west flight corridors after the European Union and Moscow issued tit-for-tat airspace bans and Washington did not rule out similar action in response to Russia's invasion of Ukraine.

Industry officials say the Biden administration would ban Russia from U.S. airspace. The White House said on Monday while barring Russian flights was not off the table, it had yet to make a decision.

"There are a lot of flights that U.S. airlines fly over Russia to go to Asia and other parts of the world and we factor in a range of factors," White House spokesperson Jen Psaki told reporters.

The issue has been a subject of intense U.S. government discussions in recent days. Senator Dick Durbin, the second-highest ranking Democrat in the U.S. Senate, voiced his support for the ban.

"Other countries have done it in Europe and turning the lights out at the airport on those guys isn't a bad idea," he told reporters.

A European official, who asked not to be identified, said the EU had full confidence Washington would follow suit.

U.S. Representative Carlos Gimenez, a Republican member of the House Transportation and Infrastructure Committee, said on Twitter that he would file legislation this week to ban Russian-operated airlines and private jets from flying in U.S. airspace.

A move by the White House to ban Russia's carriers is expected to provoke a response from Moscow, which could affect carriers like United Airlines. The Chicago-based carrier, for example, uses Russian airspace for flights from Delhi.

American Airlines said it was not using any Russian airspace for international flights and it would suspend interline deals with Russian carriers Aeroflot and S7 Airlines indefinitely.

Russia on Monday banned airlines from 36 countries including all 27 members of the European Union after EU ministers agreed to refuse entry to Russian airplanes including the private jets of the country's oligarchs.

In one of the first signs of differences in European ranks, the chairman of Italy's civil aviation authority called the airspace sanctions against Russia a violation of international treaties.

The European official, however, said the EU's sanctions were "carefully crafted in line with international law."

The sanctions have sparked flight cancellations and costly detours, denting the industry's pandemic recovery and dealing a blow to the mainly Ireland-based leasing industry which was ordered to stop doing business with Russian airlines.

The rerouting meant that flights in Kazakhstan's airspace tripled to more than 450 on Monday.

Without access to Russia's airspace, many carriers will have to divert flights south while also avoiding areas of tension in the Middle East.

Finnish national carrier Finnair cancelled flights to Japan, Korea, China and Russia and scrapped 2022 guidance, as sanctions block access to Asia - a cornerstone of its strategy in recent years due to its Helsinki hub's location.

Shares in Finnair plunged 21%, leading a retreat in airline stocks in both Europe and the United States.

Germany's Lufthansa group said 30 flights to Russia would be cancelled this week and flights from Europe to Tokyo and Seoul would have to fly detours.

Russia's Aeroflot said it has cancelled flights to the United States, Mexico, Cuba and the Dominican Republic through Wednesday due to the closure of Canadian airspace. The announcement came a day after the carrier said it would cancel all flights to European destinations.

On Monday, an Aeroflot jet headed to Verona in Italy was forced to enter a holding pattern outside EU airspace and was diverted to Turkey after apparently being refused access, according to flightradar24.

That came hours after one of its flights crossed Canadian airspace despite Toronto's ban on Russian planes, prompting a regulator to launch a review into the conduct of Aeroflot and Canada's air-traffic control service provider.

Other carriers from Latvia's AirBaltic to Singapore Airlines have also suspended flights to Russia.

Korean Air, Japan Airlines and Japan's ANA Holdings said they were continuing to use Russian airspace but had no plans to add flights to Russia or Europe to replace flights cancelled by European carriers.

Demand to Japan and South Korea has been low due to COVID-19-related travel restrictions.

Many cargo carriers use Russian airspace, which is a major intersection for global trade, about half of which by value is carried by air.

"Due to the ongoing dramatic developments in the Russia-Ukraine conflict, Lufthansa will no longer use Russian airspace," Lufthansa Cargo said.