Oil surges above $100 a barrel, stocks slide on Ukraine conflict 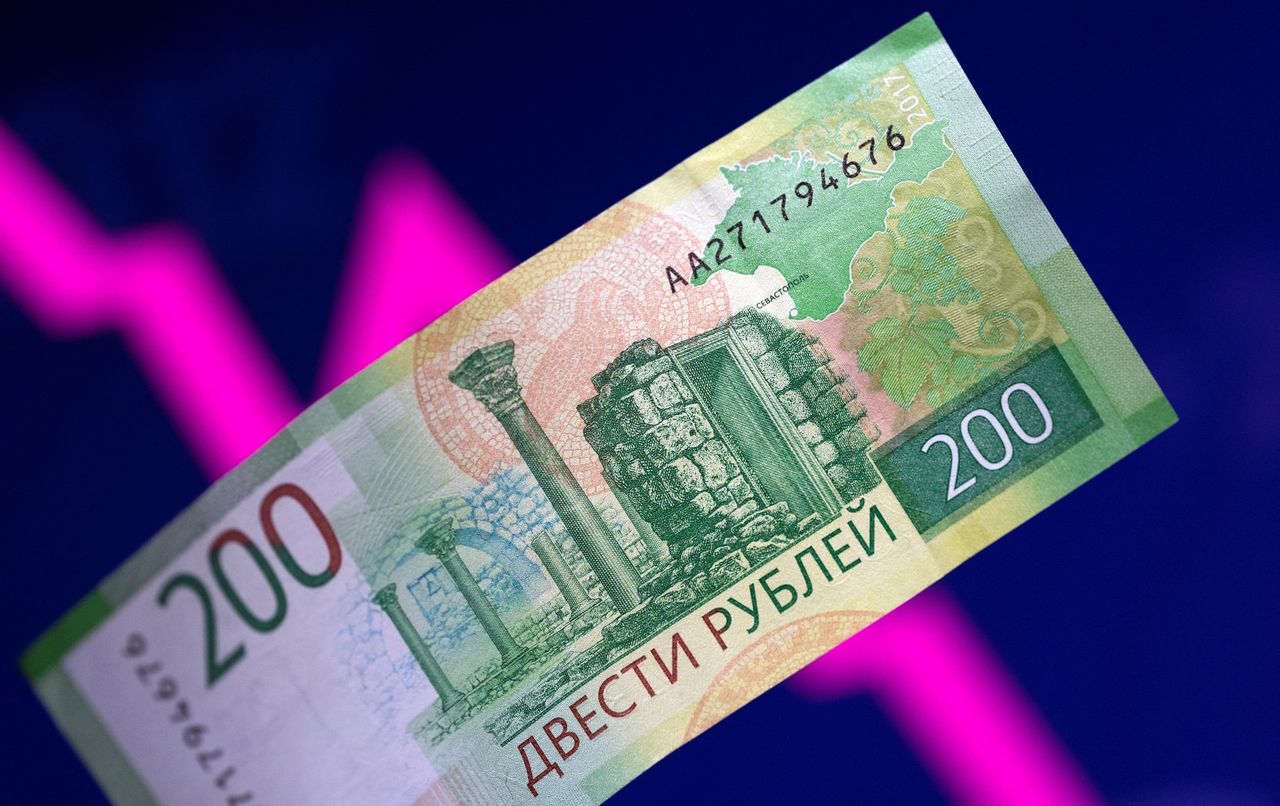 A Russian rouble banknote is seen in front of a descending stock graph in this illustration taken March 1, 2022. REUTERS/Dado Ruvic/Illustration

NEW YORK/LONDON (Reuters) -Oil shot back above $100 a barrel and U.S. and German government debt rallied on Tuesday as fears increased over the impact of aggressive sanctions against Russia after its invasion of Ukraine, further depressing stocks in Europe and on Wall Street.

Russia's equity markets remained suspended and some bond trading platforms were no longer showing prices, but dealing in the world's major financial centers was orderly, albeit jittery.

The main stock indices in Germany, France, Italy and Spain closed down more than 3% while the pan-European STOXX 600 index fell 2.4%.

The Dow, S&P 500 and Nasdaq equity indexes all closed around 1.5% lower while U.S. and European banking indices were hit hard for a second day, falling about 5.6% each.

Yields on 10-year German bunds slid back into negative territory for the first time since late January and U.S. Treasuries dropped to five-week lows as prices, which move inversely to a bond's yield, rallied on safe-haven buying.

On the sixth day of Russia's invasion of Ukraine, the disruption caused by sanctions have raised questions about the toll of the crisis on global growth and inflation.

"If Russia controls more of Ukraine's food and energy production capacity and those types of things, they may end up being more expensive for everyone around the world," said Tom Simons, a money market economist at Jefferies in New York. "The economic consequences of it may be more long-lasting."

The upending of Russian trade may spur an increase in the pace of inflation in the short-term for many European jurisdictions, Citi researchers said in a note.

Investors are acting rationally from a market standpoint, driving up oil, gas and commodity prices because they understand there could be supply chain disruptions, said Anthony Saglimbene, global markets strategist at Ameriprise Financial.

"Moving forward, though, there's all these second- and third-derivative impacts that the market is still trying to figure out," Saglimbene added. "When you cut Russia out of the global financial system, what are the ramifications for not only Russia, but stability across Europe right now?"

Russian assets went into freefall with London-listed iShares MSCI Russia ETF plunging 33% to a fresh record low and shares of Sberbank, Russia's biggest lender, falling to 21 cents on the dollar from just under $9 before the invasion.

Russia warned Kyiv residents to flee their homes and rained rockets down on Kharkiv, as Russian commanders who have failed to achieve a quick victory shifted their tactics to intensify the bombardment of Ukrainian cities.

Oil prices surged more than 10% at one point as talks about a coordinated global release of crude inventories failed to calm fears about supply disruptions due to the war.

News of the release - less than one day of worldwide oil consumption - underscored the market's fear that supply will be inadequate to cover growing disruptions to the crude market.

Traders in the largest U.S. oil hubs have put imports from Russian companies on hold, even though the White House has said oil sales are not a target of sanctions. This means sanctions have become more disruptive than expected.

Both oil and gas prices are now up nearly 60% since fears of an invasion of Ukraine began to escalate in November.

The likelihood of a slowing global economy has led to concerns that the Federal Reserve and other central banks will not be as aggressive in hiking interest rates in coming months.

The bond market is much more worried about growth than inflation due to a decline in real interest rates, said Joseph LaVorgna, chief economist for the Americas at Natixis.

"The real rate has collapsed. It's down almost 50 basis points in two weeks," LaVorgna said of the gap between nominal rates and inflation-protected securities. "The real concern remains growth."

The euro touched its lowest against the U.S. dollar since June 2020. The U.S. dollar index, which measures the greenback against a basket of currencies, jumped and was last up 0.65%.

(Reporting by Herbert Lash and Marc Jones with additional reporting by Karen Brettell in New York and Sujata Rao in London; Editing by Chizu Nomiyama, Will Dunham, Bernadette Baum and Mark Heinrich)