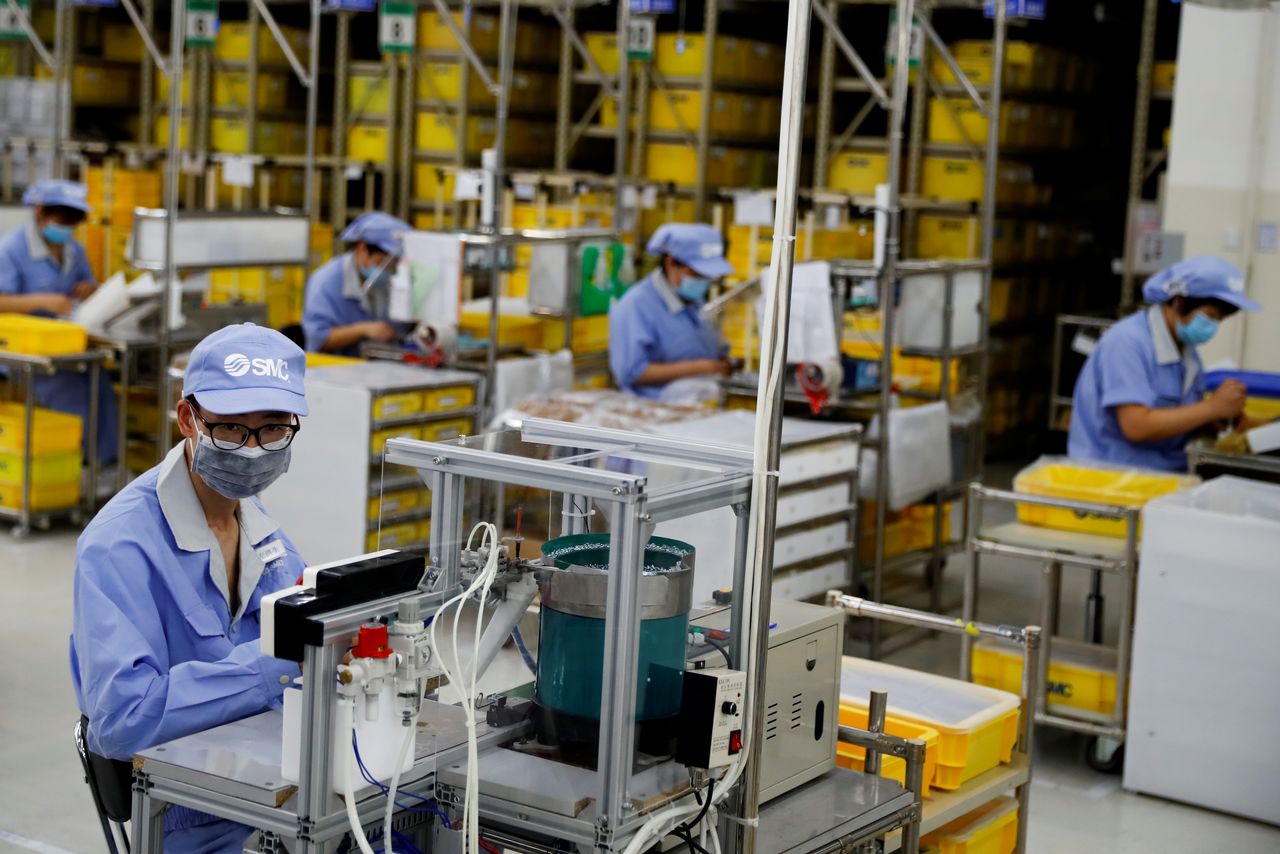 FILE PHOTO: Employees wearing face masks work at a factory of the component maker SMC during a government organised tour of its facility following the outbreak of the coronavirus disease (COVID-19), in Beijing, China May 13, 2020. REUTERS/Thomas Peter

LONDON/TOKYO (Reuters) - Factories around the world sustained a brisk recovery in February amid signs the Omicron coronavirus variant was having less of an impact, but the Ukraine crisis has rapidly emerged as a risk to supply chains and is likely to exacerbate cost pressures.

Strong international sanctions against Russia in response to its invasion of Ukraine have jolted markets and boosted oil prices, adding to headaches for economies and businesses already reeling from rising input costs.

"The war in Ukraine is a major new source of uncertainty," Reserve Bank of Australia Governor Philip Lowe said on Tuesday after his bank kept interest rates at a record low.

Global supply chains, still not recovered from the pandemic, are now facing further disruption and cost inflation due to airspace closures which are affecting the air freight industry.

Meanwhile, a spike in commodities prices caused by the invasion is also likely to prop up inflation, already at multi-year highs in many countries, and complicate policies for central banks as they balance the need to arrest an unwelcome rise in prices and underpin growth.

"The pick-up in global inflation has been widespread and persistent and has shown few signs of having peaked," said Pawel Borowski, senior analyst at Fitch Ratings.

"High and rising inflation has been an enduring feature of economic recoveries in many major economies, shifting the outlook for monetary policy."

On March 17 the Bank of England will raise interest rates again, a February Reuters poll forecast, and the European Central Bank will lift its deposit rate in the second half of this year and not wait until 2023 as previously expected, another Reuters poll showed. [ECILT/GB][ECILT/EU]

The ECB is due to publish its latest staff projections for growth and inflation on March 10 and is widely expected to lift its forecast for price rises.

Inflation in the bloc hit a record high 5.4% last month, preliminary official data is expected to show on Wednesday, likely adding pressure on the European Central Bank to tighten policy.

"On inflation, we expect a huge upward revision to 2022," noted economists at JP Morgan.

While the conflict in Ukraine poses a big risk for the global economy, indicators from February showed conditions had been robust ahead of the significant escalation in the crisis.

Data for most of the manufacturing surveys was collected before the Russian invasion.

In the United States, the Institute for Supply Management's index of national factory activity increased to a reading of 58.6 last month from 57.6 in January. The ISM said the outlook for manufacturing for March and April was favorable, noting that backlog orders increased by the most in 11 years in February. But economists saw some risks from the Russia-Ukraine conflict.

"Falling coronavirus cases should help the domestic side of the economy improve further in the spring months, but spillover from higher energy and food prices and international shipping disruptions related to the Russia-Ukraine war are a downside risk to manufacturing near-term," said Bill Adams, chief economist at Comerica Bank.

"The upshot is that China's economy appears to have struggled for momentum so far this year," he said.

"The most immediate hit from the crisis will come from rising oil prices, which will deal a severe blow to many Asian economies," said Toru Nishihama, chief economist at Dai-ichi Life Research Institute in Tokyo.

"Russia is a big exporter of gas, rare metals and other goods critical for chip production. That means the crisis could aggravate supply chain disruptions, which would be bad news for countries like Japan, South Korea and Taiwan."