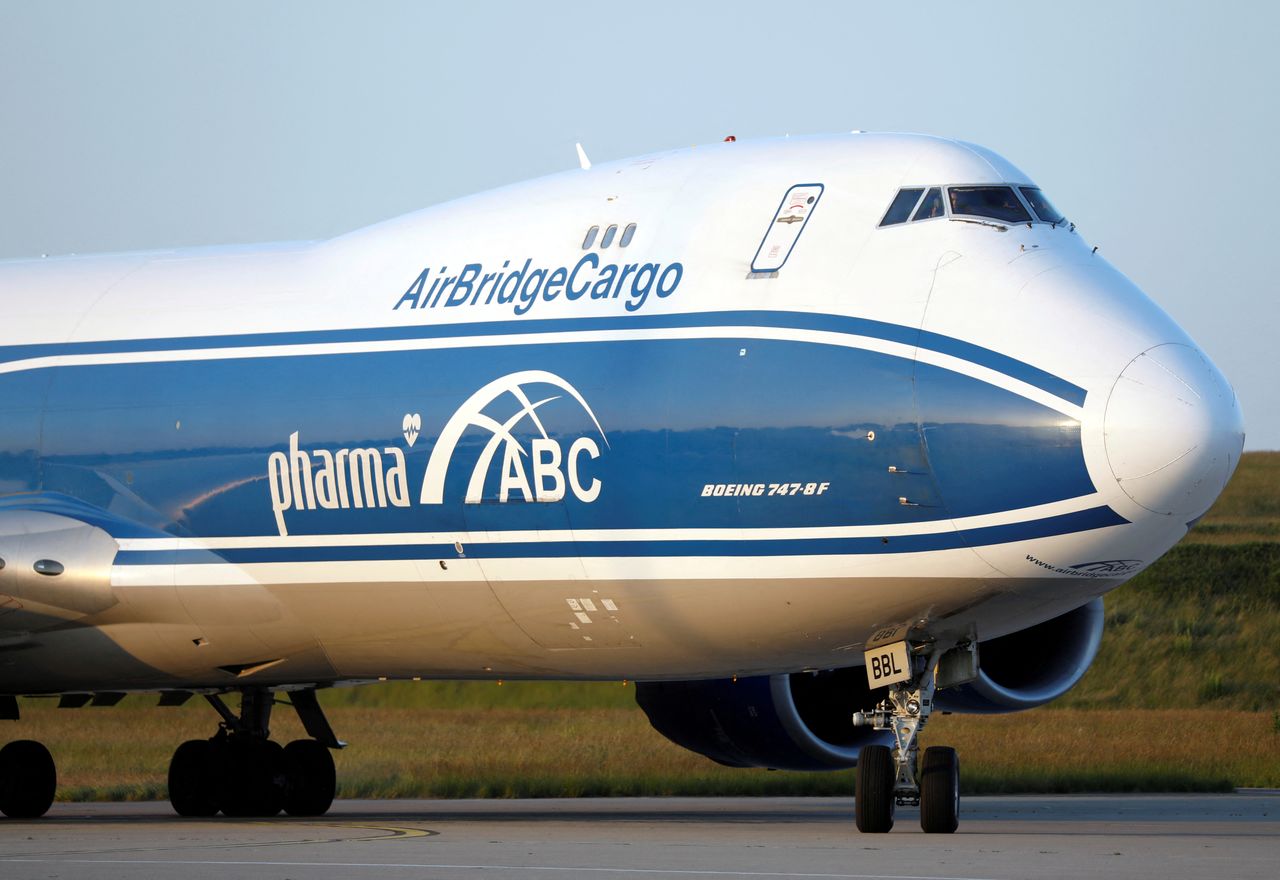 FILE PHOTO: An AirBridgeCargo Airlines Boeing 747-87U arrives at Paris Charles de Gaulle airport in Roissy-en-France carrying 21-million face masks during the outbreak of the coronavirus disease (COVID-19) in France May 25, 2020. REUTERS/Charles Platiau

(Reuters) -The United States will follow the European Union and Canada in banning Russian flights from its airspace, President Joe Biden said on Tuesday evening, in a move likely to trigger Russian retaliation.

"I am announcing that we will join our allies in closing off American airspace to all Russian flights, further isolating Russia and adding an additional squeeze on their economy," Biden said in his State of the Union address.

The White House had held extensive talks with U.S. airlines about the issue in recent days.

The ban will take effect by the end of Wednesday.

Russian flights were already effectively barred from U.S. destinations for the most part in recent days because of bans on the use of Canadian and European airspace.

Some foreign governments had privately questioned why the United States did not move faster to ban Russian planes, as had some U.S. lawmakers.

The European Union had said on Tuesday that it was speaking to U.S. counterparts about extending the ban as it gave more details of the EU's closure of airspace to Russian aircraft imposed after Moscow's invasion of Ukraine.

A senior EU official said Russian oligarchs, even those with dual nationalities, would not be able to get around the EU airspace ban.

"It doesn't matter whether they are EU residents, if they are Russian nationals, they will be covered," the official said.

"Russian nationals or a Russian company cannot charter, own or control a plane that will be flying into the EU, out of the EU or overflying the EU. So that's the rule."

Global supply chains, already hit hard by the pandemic, will face increasing disruption and cost pressure from the closure of the skies which will affect over a fifth of air freight.

Hardest hit are likely to be Russian carriers, which make up approximately 70% of the flights between Russia and the EU.

Transport between Europe and North Asian destinations like Japan, South Korea and China is in the front line of disruption after reciprocal bans barred European carriers from flying over Siberia and prevented Russian airlines from flying to Europe.

Airlines responsible for moving around 20% of the world's air cargo are affected by those bans, Frederic Horst, managing director of Cargo Facts Consulting, told Reuters on Tuesday.

Scandinavian airline SAS said it would re-route its once-weekly Copenhagen-Shanghai service to avoid Russian airspace, and had also paused its Copenhagen-Tokyo service.

Pure cargo carriers like Russia's AirBridgeCargo Airlines and Luxembourg's Cargolux are subject to the bans in a move that could send air freight rates - already elevated due to a lack of passenger capacity during the pandemic - soaring further.

In December, air cargo rates were 150% above 2019 levels, according to the International Air Transport Association.

Sanctions imposed on Russia in the wake of its Ukraine invasion are expected to further disrupt global supply chains.

Russia's AirBridgeCargo alone moves just under 4% of global international air cargo, with most of that between Europe and Asia, Horst said.

"All up you could be looking at perhaps a quarter of air cargo between Asia and Europe needing to find alternate means of transportation," Horst said.

"Yields are high enough that flying a longer route via Southeast Asia, South Asia or the Middle East is an option, but it will still pull capacity out of the market."

Shipping container shortages and port bottlenecks mean more products are being flown by air. Demand for air cargo last year was 6.9% above 2019 levels, according to IATA.

Taiwan's EVA Airways said on Tuesday its cargo flights to and from Europe were operating normally and it would consider adding more services to meet market demand.

Asia-North America cargo routes are expected to be less affected than European routes, analysts say, because many carriers already use Anchorage, Alaska, as a cargo hub and stopover point.