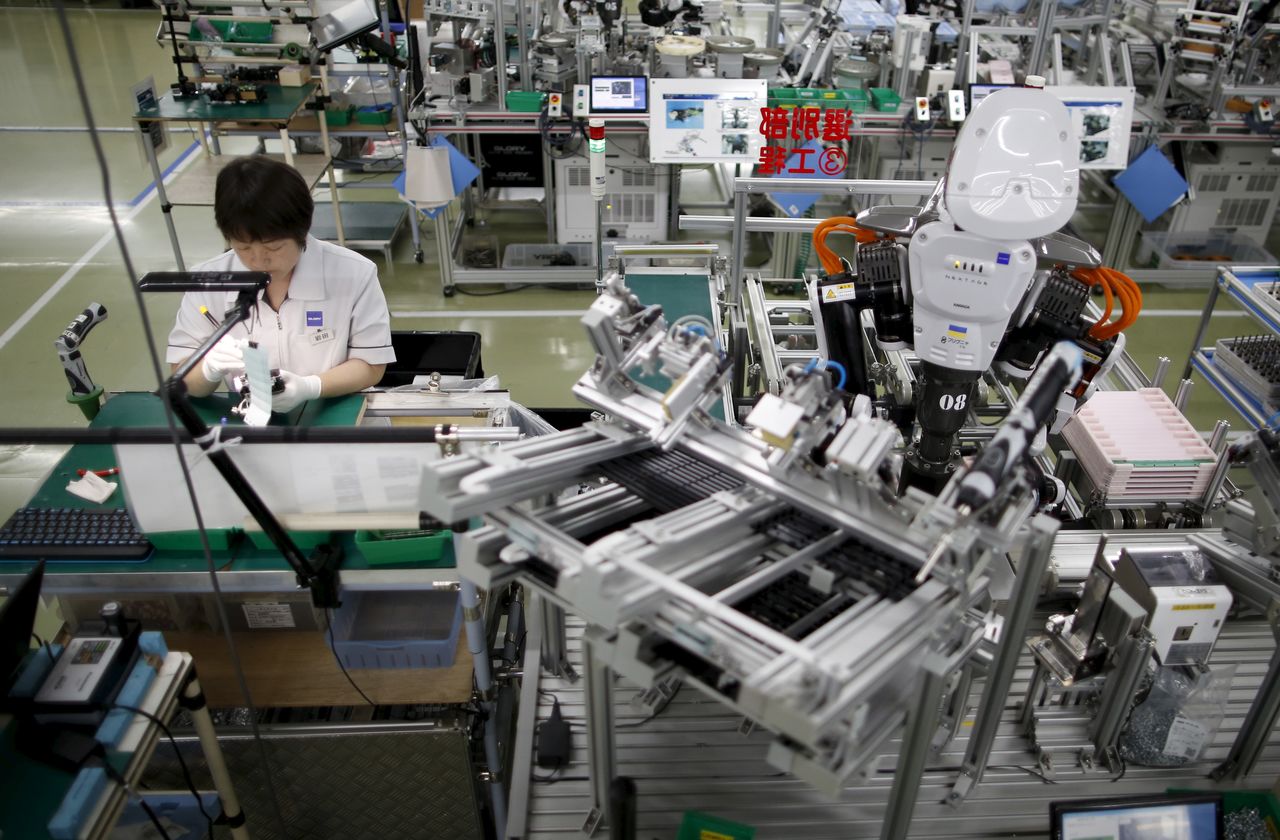 FILE PHOTO: A humanoid robot works side by side with an employee in the assembly line at a factory of Glory Ltd., a manufacturer of automatic change dispensers, in Kazo, north of Tokyo , Japan, July 1, 2015. REUTERS/Issei Kato

TOKYO (Reuters) -Japanese firms increased spending on plant and equipment for the third consecutive quarter in October-December, as corporate sentiment got a boost from falling coronavirus cases and helped lift broader economic activity.

A solid recovery of business expenditures is likely to ease worries for policymakers who are facing pressure to bolster the country's economic recovery as the Ukraine crisis threatens to hurt the global economy.

Ministry of Finance (MOF) data out on Wednesday showed capital expenditure in the final quarter of last year rose 4.3% from the same period last year, marking the third straight quarter of year-on-year gains.

That was stronger than a 1.2% increase compared to a year earlier in the third quarter.

"While overall sentiment is improving, it remains to be seen if capital spending will gradually stage a full recovery," said Takumi Tsunoda, senior economist at Shinkin Central Bank Research Institute.

"Capital spending hasn't been bad overall and companies have been lagging behind somewhat in their investments. But they're facing some pressure from supply constraints."

The reading, which will be used to calculate revised gross domestic product (GDP) due next Wednesday, was a bit stronger than expected, said Tsunoda, adding it could lead to a slight upgrade of the capital spending component in GDP.

The data comes after factory output posted a surprisingly large drop in January as the auto sector dealt with pandemic-induced production suspensions and parts supply shortages.

After shrinking in the July-September period, the world's third-largest economy returned to growth in the final three months of last year on a rebound in consumption, growing an annualised 5.4% on a preliminary basis.

But that was before the Ukraine crisis erupted and the Omicron variant of the coronavirus drove a record surge in infections at home.

Capital expenditure gained 3.4% in October-December from the previous quarter on a seasonally-adjusted basis, the MOF data showed.

Corporate recurring profits rose 24.7% in October-December from a year earlier, while sales were up 5.7%.

The survey showed persistent weakness in recurring profits and sales of the auto sector due to supply constraints, a government official said.