By Herbert Lash and Elizabeth Howcroft

NEW YORK/LONDON (Reuters) -U.S. and European stocks rebounded on Wednesday and crude prices surged past $110 a barrel as fighting raged in Ukraine for a seventh day, posing a challenge for central banks hoping to curb rising inflation.

Gold prices slipped on improving sentiment and U.S. Treasury yields rose from eight-week lows as investors weighed how aggressively the Federal Reserve might raise interest rates in coming months with the outlook on growth a major concern.

The Fed will move forward with plans to raise rates this month to try to tame high inflation, but the war in Ukraine has made the outlook "highly uncertain" for U.S. policymakers as they plan ahead, Fed Chair Jerome Powell said.

Powell told a congressional committee that he was "inclined to propose and support a 25 basis-point rate hike" when policymakers meet in two weeks. The remarks eased widely held expectations before the invasion of a 50 basis-point hike.

"There was a broad belief they were going to create a big splash to get everybody’s attention," said Jack Ablin, chief investment officer at Cresset Capital Management.

"The fact the Fed was not expected to tighten that much, and then Powell confirmed that suspicion this morning, has led to this enthusiasm," he said.

Markets are struggling with what happens to growth in Europe and the U.S. because of the Ukraine conflict, said Marvin Loh, global macro strategist at State Street.

"This increase in energy prices makes it a challenge for the Fed because on the one end, it increases inflation," Loh said.

"But, generally speaking, when you get these surges in energy prices there's a deflationary component associated with that, because it saps growth elsewhere," he said.

After a week at war, Russia has yet to achieve its aim of overthrowing Ukraine's government. Ukrainians said a battle ensued in the port of Kherson, the first sizeable city Moscow claimed to have seized.

All 11 S&P sectors advanced, led by financials, and the major European indices finished the day in a sea of green too, with commodity-linked stocks making big gains.

The pan-European STOXX 600 index rose 0.90%, rebounding from an earlier decline, and MSCI's gauge of stocks across the globe closed up 0.93%.

Euro zone inflation soared to another record high last month, intensifying a policy dilemma for the European Central Bank, which needs to convey a sense of calm amid war-related market turmoil and also respond to mounting price pressures.

Crude surged again on a wave of divestments from Russian oil assets by major companies and expectations that the market will remain short of supply for months to come. [O/R]

Aluminium prices bolted to a fresh record peak as investors fretted that logistics difficulties would block metals supplies due to tough sanctions on major producer Russia.

Three-month aluminium on the London Metal Exchange surged to a record of $3,580 a tonne.

David Meger, director of metals trading at High Ridge Futures, said there was a lesser need for safe havens.

The ruble plunged to a record low in Moscow trade and the stock market remained closed as Russia's financial system staggered under the weight of Western sanctions.

Shares of Van Eck's battered Russia ETF, which are attracting interest from traders in a comparison to last year’s frenzy in so-called meme stocks, tumbled 13%.

Foreign investors are effectively stuck with their holdings of ruble-denominated bonds after the Russian central bank put a temporary halt on coupon payments and a major overseas' settlement system stopped accepting Russian assets.

JP Morgan analysts said in a note the sanctions on Russia have "significantly increased the likelihood of a Russia government hard currency bond default." 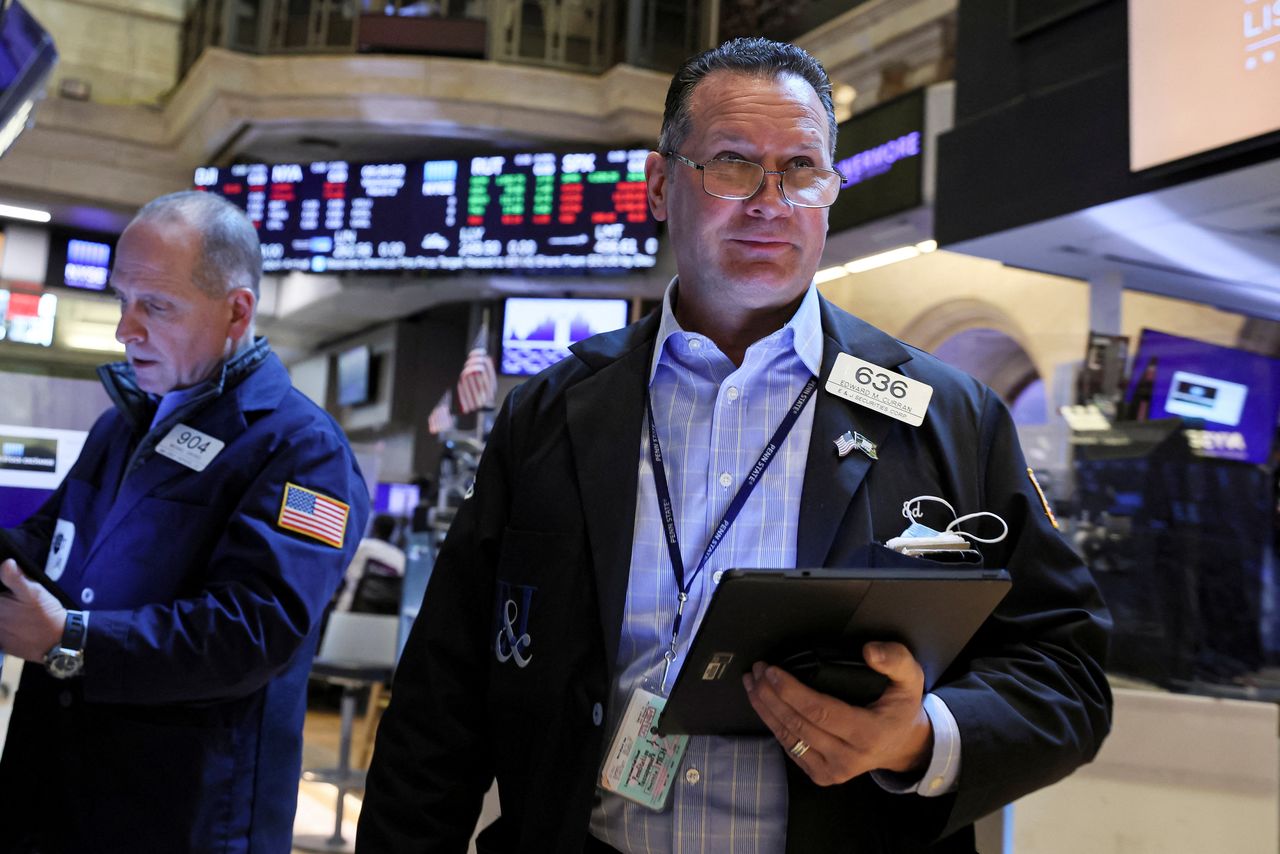 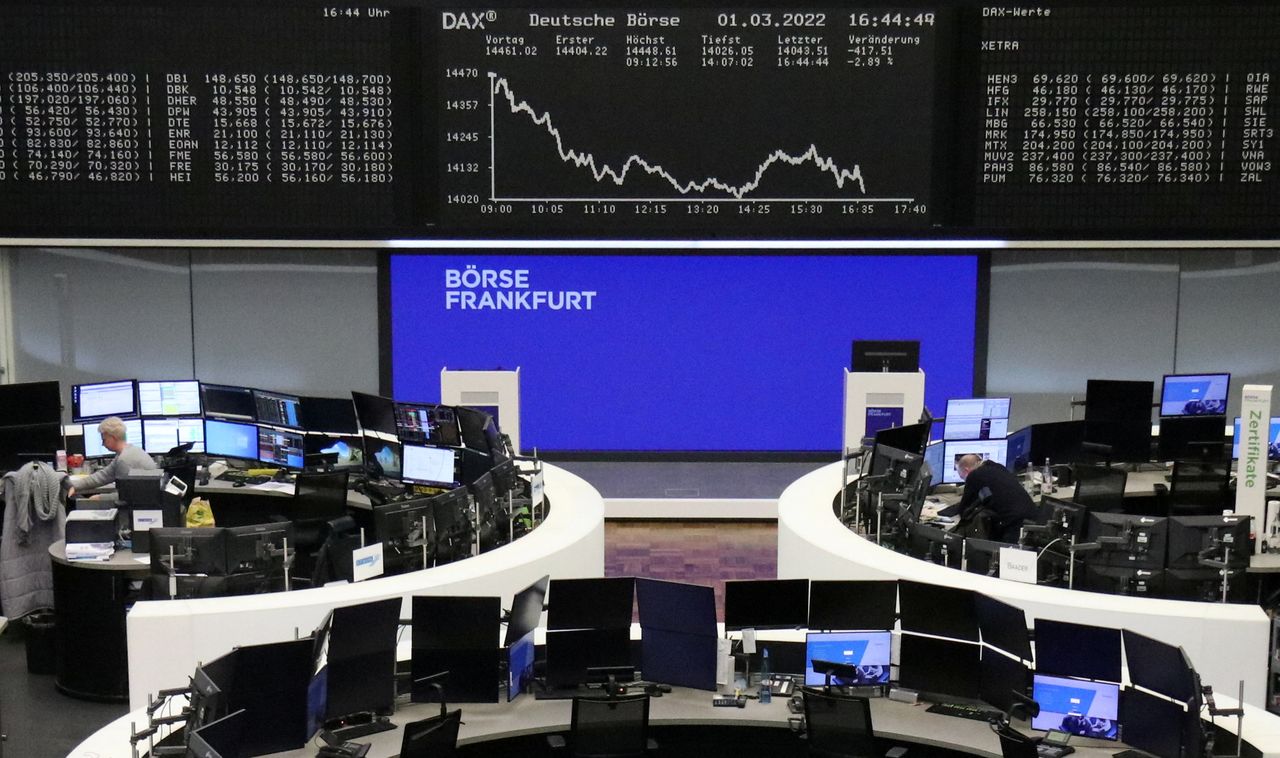 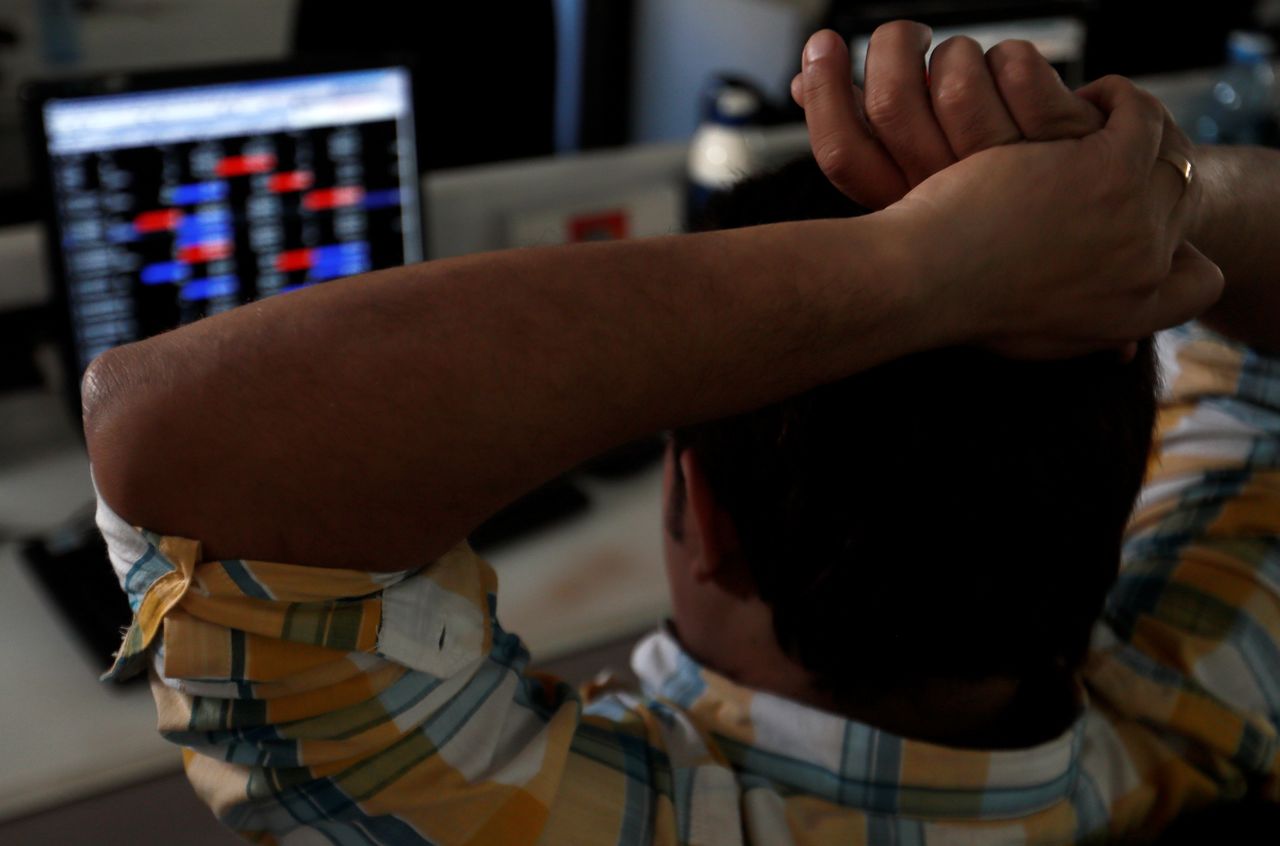 FILE PHOTO: A broker reacts while trading at his computer terminal at a stock brokerage firm in Mumbai, India, February 1, 2020. REUTERS/Francis Mascarenhas