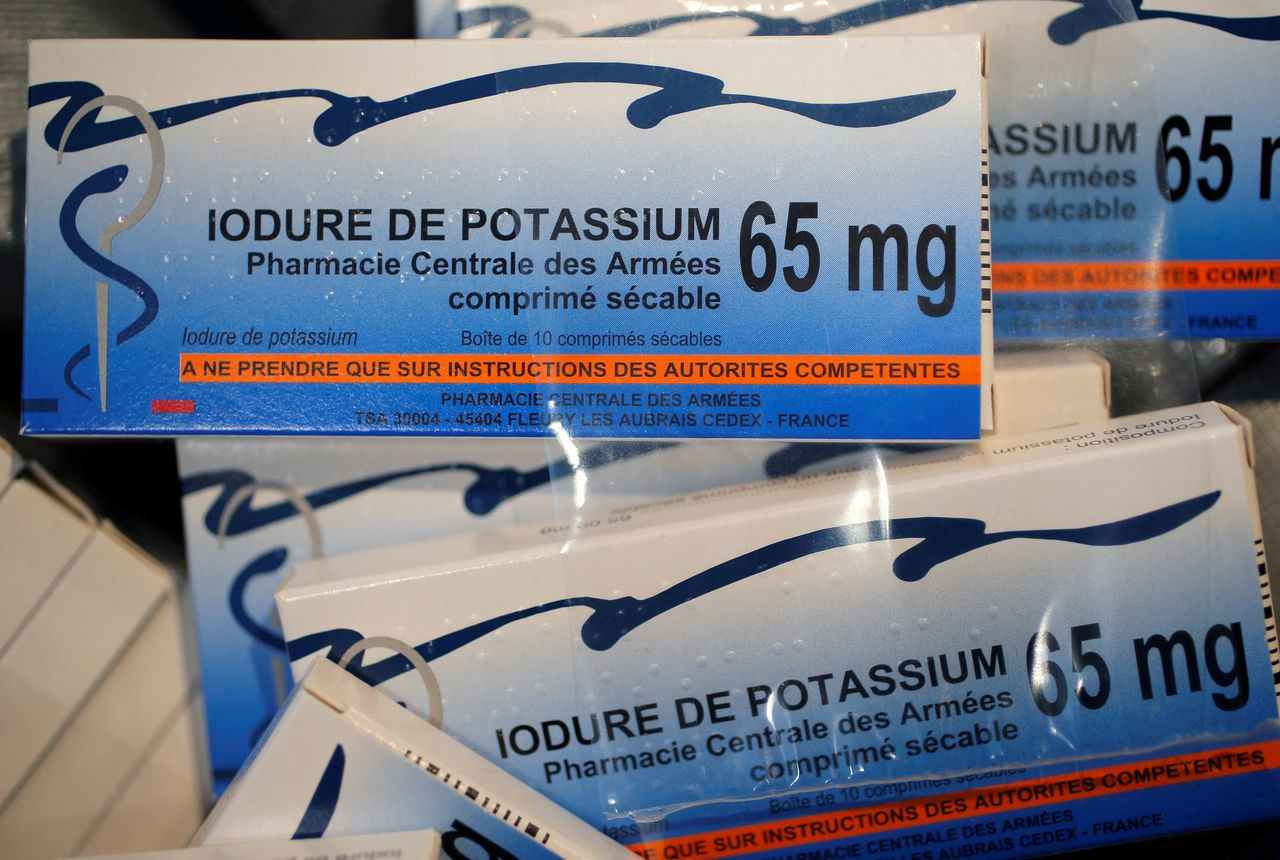 By Jason Hovet and Anna Wlodarczak-Semczuk

PRAGUE/WARSAW (Reuters) - Russia's invasion of Ukraine and Vladimir Putin's comments that Moscow's nuclear deterrent is on high alert have unleashed a wave of anxiety in Central Europe, with people rushing to buy iodine which they believe may protect them from radiation.

From Poland to Bulgaria, people living in the former Soviet-era satellite states have also jammed passport offices, topped up their fuel tanks and prepared to leave at a moment's notice.

Others enquired about joining the military.

"In the past six days Bulgarian pharmacies have sold as much [iodine] as they sell for a year," said Nikolay Kostov, chair of the Pharmacies Union. "Some pharmacies are already out of stock. We have ordered new quantities but I am afraid they will not last very long."

"It's been a bit mad," said Miroslava Stenkova, a representative of Dr. Max pharmacies in the Czech Republic, where some stores had run out of iodine after demand soared.

Iodine - taken as pills or syrup - is considered a way of protecting the body against conditions such as thyroid cancer in case of radioactive exposure. In 2011, Japanese authorities recommended that people around the site of the damaged Fukushima nuclear power plant take iodine.

Officials in the region have recognised the demand but cautioned iodine is not necessary in the current situation and would not help in case of nuclear war.

Dana Drabova, head of the Czech State office for Nuclear Safety, wrote on Twitter: "You ask a lot about iodine tablets... as radiation protection when (God forbid) nuclear weapons are used, they are basically useless."

News last week that Russian forces had gained control of the Chernobyl nuclear plant where an accident in 1986 contaminated a huge swathe of Ukraine and sent a radioactive cloud across Europe, unnerved people in a region where many remember being given iodine in the aftermath of that disaster.

Radiation levels at Chernobyl have increased but are still low enough not to pose a hazard to the public despite the movement of Russia's military vehicles there, the U.N. nuclear watchdog IAEA said on Wednesday.

In Poland, the number of pharmacies selling iodine more than doubled, according to gdziepolek.pl, a Polish website that helps patients find the nearest pharmacy with a drug they are seeking.

"Internal data on our website shows that interest in iodine increased around 50 times since last Thursday," said Bartlomiej Owczarek, the website's co-founder.

Since the start of the fighting last Thursday, hundreds of thousands of refugees have crossed into the European Union, mainly entering through borders in Poland, Slovakia and Hungary to flee what Russian President Vladimir Putin calls a "special military operation" to disarm Ukraine and capture "neo-Nazis" he falsely says are running the country of 44 million people.

Washington and its NATO allies have rejected Ukraine's request to impose a no-fly zone over the country, arguing this would lead to direct confrontation with nuclear-armed Russia.

Against this backdrop, some central Europeans have prepared to leave, clogging passport offices to ensure they had valid travel documents. Slovakia's interior minister called on citizens not to flood police with applications while long lines formed outside some passport offices in Warsaw.

"I have a son who lives outside the EU and I am supposed to go visit him and I was afraid that later I would not be able to get a passport," said Maria, a pensioner standing in line who declined to give her full name.

"All these people are not standing in this line on a whim, but because they want a safety net."

At a recruiting station in Prague, an officer said interest had jumped and one student said he was there due to Ukraine.

"The situation in Ukraine only convinced me it is probably the best decision I can take for my country," said Marek Jetmar, a 27-year-old psychology student.