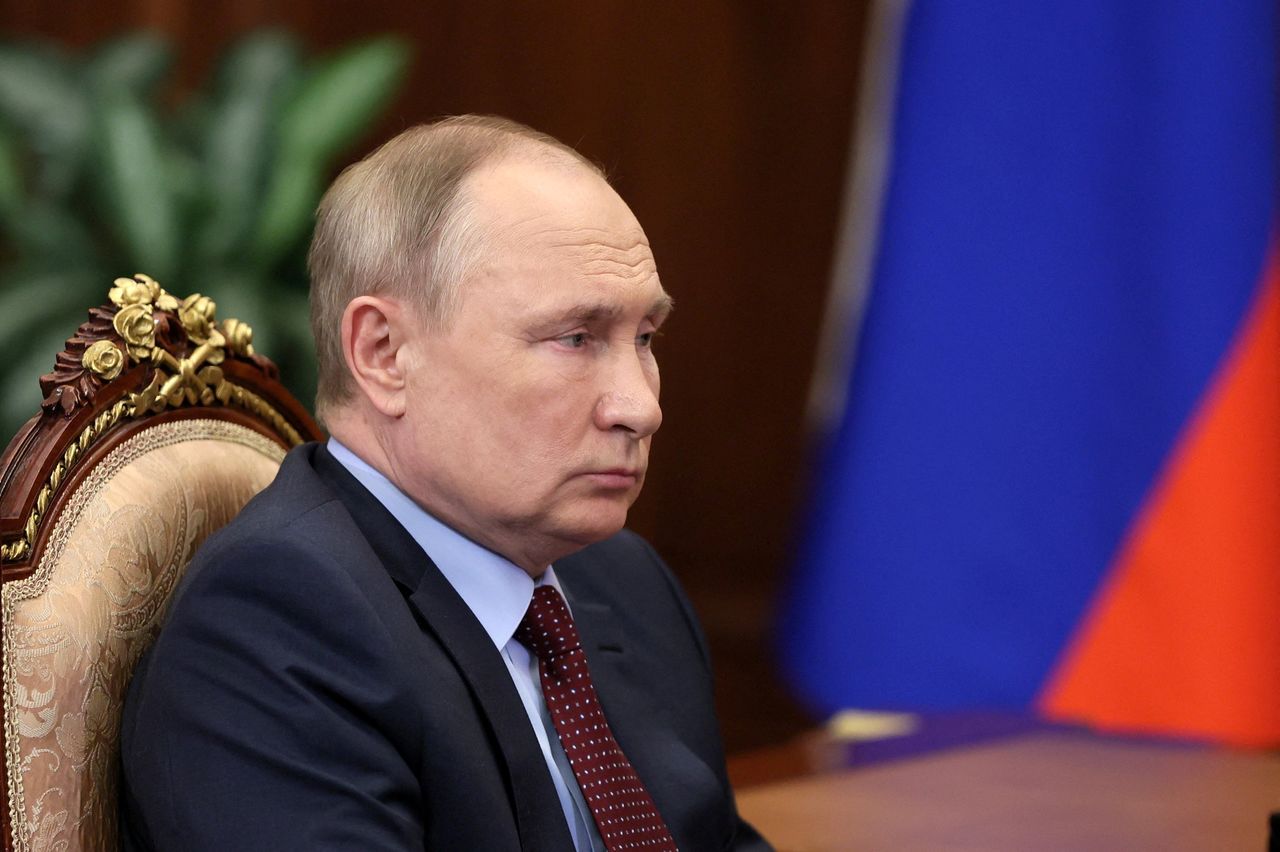 Russian President Vladimir Putin attends a meeting with the head of the Russian Union of Industrialists and Entrepreneurs Alexander Shokhin in Moscow, Russia March 2, 2022. Sputnik/Mikhail Klimentyev/Kremlin via REUTERS ATTENTION EDITORS - THIS IMAGE WAS PROVIDED BY A THIRD PARTY.

LONDON (Reuters) -The European Union, the United States, Britain and others have hit Russia with a wide range of sanctions after its invasion of Ukraine.

They have also imposed asset freezes, travel bans and other restrictions on numerous Russian individuals including President Vladimir Putin himself.

Following is a roundup of some of the broadest sanctions imposed by major economies around the world.

The European Union is excluding seven Russian banks from the SWIFT messaging system that underpins global transactions, it said on Wednesday.

Sberbank, Russia's largest lender, and Gazprombank have not been included as they are the main channels for payments for Russian oil and gas, which EU countries are still buying. But Sberbank said on Wednesday it was exiting almost all European markets.

The EU has also frozen part of what it calls "Putin's war chest" by banning its transactions and freezing all its assets in the 27-nation bloc. This is meant to make it impossible for the Russian central bank to liquidate its assets. It will also ban EU investors from trading in Russian state bonds.

The EU is introducing measures to crimp Russia's technological position in key areas from high-tech components to cutting-edge software.

Nord Stream 2, a recently completed pipeline from Russia to Germany, was awaiting regulatory approval by EU and German authorities before Berlin put its certification on ice following Russia's Feb. 24 invasion of Ukraine.

The EU has shut down its airspace for Russia, banning all Russian aircraft from taking off, landing or overflying the EU.

It has banned the export, sale, supply or transfer of all aircraft, aircraft parts and equipment to Russia.

The EU has toughened existing sanctions on goods that can be used for civilian or military purposes, targeting the military-industrial complex of Russia and Belarus and limiting their access to advanced technology such as drones and software for drones, software for encryption devices, semiconductors and advanced electronics.

The bloc has also blacklisted prominent Russian individuals including Putin and Foreign Minister Sergey Lavrov, although the two are exempt from an EU travel ban - this is meant to enable negotiations with them should the opportunity arise.

Still, Putin is now one of only three world leaders blacklisted by the EU, along with Syria's Bashar al-Assad and Alexander Lukashenko of Belarus. The blacklist currently includes 654 individuals and 52 entities.

The United States has imposed sanctions on Russia's central bank and other key sources of wealth, blocking Americans from engaging in any transactions involving the bank, finance ministry and national wealth fund.

Together with Britain it has also announced restrictions that in effect kick most Russian banking assets out of both countries. Their targets include Sberbank and VTB Bank, Russia's two largest lenders.

The United States and EU already have sanctions in place on Russia's energy and defence sectors, with state-owned gas company Gazprom, its oil arm Gazpromneft and oil producers Lukoil, Rosneft and Surgutneftegaz facing various types of curbs on exports/imports and debt-raising.

The United States has closed its airspace to Russian planes.

Together with the United States and EU, Britain has barred British entities from transactions with Russia's central bank, finance ministry and sovereign wealth fund.

It has imposed measures to prevent Russian companies from issuing transferable securities and money market instruments in the UK, and Russia cannot sell sovereign debt in the UK either.

Britain has barred a number of Russian banks from accessing sterling and clearing payments through the UK.

London has further implemented measures to significantly strengthen its trade restrictions against Russia. This will include a prohibition against the export of a range of high-end and critical technical equipment and components in sectors including electronics, telecommunications and aerospace.

Britain will also introduce legislation to limit deposits that Russian nationals can hold in UK bank accounts. The limit will be 50,000 pounds ($66,860) at British banks.

Britain has banned Russian planes from its airspace.

Japan is joining the international sanctions on Russia's central bank by limiting transactions with it, Prime Minister Fumio Kishida said on Monday.

Tokyo has imposed export controls on semiconductors and other high-tech products, and has suspended visa issuance for a list of Russian individuals and entities.

Canada shut its ports to Russian-owned ships on Tuesday and said the holdings of all Russian oligarchs and companies in the country are under review.

Australia has imposed sanctions on Russia targeting several of its elite citizens and lawmakers.