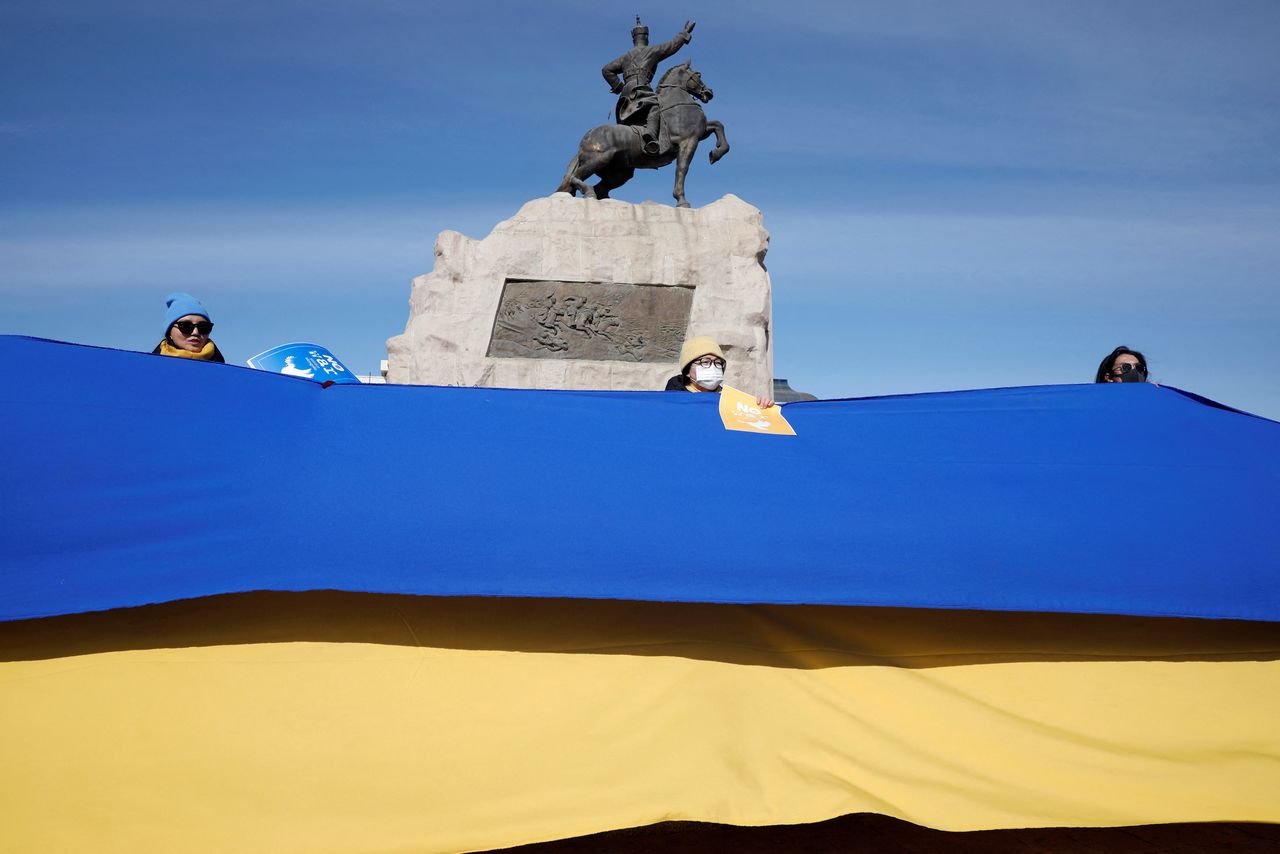 FILE PHOTO: Demonstrators attend a rally in support of Ukraine following Russia's invasion of the country, near the Government Palace on Sukhbaatar Square in Ulaanbaatar, Mongolia March 1, 2022. REUTERS/B. Rentsendorj

SHANGHAI (Reuters) - Russia's invasion of Ukraine and the imposition of tough sanctions on Moscow has put landlocked Mongolia in a tight spot economically and diplomatically, and experts warn that its delicate balancing act between East and West could be upset.

On Tuesday, a small group of protesters gathered on Ulaanbaatar's Sukhbaatar Square to call for an end to hostilities in Ukraine, only to be confronted by residents worried about antagonising Russia.

The stand-off reflected the faultlines in a country that underwent a democratic transition in 1990 following decades of Soviet hegemony, and now worries about the growing regional dominance of China.

Surrounded by Russia in the north and China in the south, Mongolia has cultivated allies such as Japan, South Korea and the United States in a "third neighbour" diplomatic strategy aimed at reinforcing its political independence, but its economy has continued to rely on its two giant neighbours.

Mongolia's central bank warned at the start of the week that most of its foreign trade is facilitated through Russian banks and it sources nearly all of its oil from its northern neighbour, which is now facing international isolation.

Bank Governor Lkhavgasuren Byadran warned there were risks that payments could not be made, and deliveries of food and consumer goods from Europe also faced disruption.

“We are too dependent on Russia and it will hit us in many aspects, not only petrol," said Sumati Luvsandendev, a Mongolian political analyst and opinion pollster, noting that Mongolia sourced large amounts of grain from Russian suppliers.

"Our banks are reliant on transfer through Russian banks so SWIFT will hit our import-export operations as well," he said.

Mongolia also remains one of the few remaining member countries of the Russia-led International Bank for Economic Cooperation and the International Investment Bank, following the withdrawal of five European nations on Wednesday.

By making Russia more dependent on China as a market for its raw materials, the crisis in Ukraine could undermine years of Mongolian efforts to escape from its neighbours' shadow.

"For a country like us, sandwiched between two giants, a landlocked but extremely open economy relies on smooth border trade," said Otgochuluu Chuluuntseren, economist and former government official. "The situation was tense anyway. Now, this war has made the Mongolian economy even more troubled."

Mongolia signed an agreement this week to build the Mongolian section of a transnational gas transmission project aimed at supplying 50 billion cubic metres of Russian gas to China, known as Power of Siberia 2.

Mongolia has usually tried to keep out of geopolitical disputes. It did not comment on Russia's decision to send troops to Kazakhstan to help quell protests last year, or on the U.S. withdrawal from Afghanistan – even though its own soldiers have been deployed there.

So far, it has stayed silent over the invasion of Ukraine, and it was one of 34 countries to abstain on a U.N. resolution demanding the withdrawal of Russian troops on Wednesday.

“The current leadership... is disinclined to rustle Putin or Xi's feathers," said Julian Dierkes, an expert in Mongolian politics at the University of British Columbia.

But it could come under pressure to take sides in an increasingly polarised geopolitical conflict, especially if Moscow – ostracized by Europe and the West – pivots eastwards.

"I used to think that Russia didn't really pay enough attention to Mongolia to be upset, but in the current circumstances that may not be the case," said Dierkes.

The more it is forced to take sides on issues like Ukraine, the less room for manoeuvre Mongolia will have when it comes to its strategy aimed at counterbalancing Russian and Chinese economic and political influence through the cultivation of "third neighbours" like the United States and Japan.

"Regarding our third neighbours, we hope that they understand our unique situation," said Otgochuluu. "Mongolia is committed to universal values of freedom and democracy. But its economy is not self-sufficient."