By Maksym Levin and Pavel Polityuk

BORODYANKA/LVIV, Ukraine (Reuters) - Russia and Ukraine agreed on Thursday to the need for humanitarian corridors to help civilians escape Moscow's eight-day-old invasion, the first apparent progress in talks, as the United States added to Western sanctions on more oligarchs.

Thousands are thought to have died or been wounded as the biggest attack on a European state since World War Two unfolds, creating 1 million refugees, hits to Russia's economy and fears of wider conflict in the West unthought-of for decades.

Russian forces have continued to surround and attack Ukrainian cities, including Mariupol, the main port in the east which has been under heavy bombardment, with no water or power. Officials say they cannot evacuate the wounded.

After talks at an undisclosed location, Russia said "substantial progress" had been made while the Ukrainian side pointed to an understanding on helping ordinary people, but not the results Kyiv had hoped for.

"That is, not everywhere, but only in those places where the humanitarian corridors themselves will be located, it will be possible to cease fire for the duration of the evacuation," he said.

They had also seen eye-to-eye on the delivery of medicines and food to the places where the fiercest fighting was taking place. The negotiators will meet again next week, the Belarusian state news agency Belta quoted Podolyak as saying.

The West has responded to Russian President Vladimir Putin's invasion with military support and by tightening the economic screws on the Kremlin and Russians. The fallout so far has included queues outside banks, a plunge in the value of the rouble and an exodus of foreign companies.

In a sign of business unease, Russia's second-largest oil producer Lukoil called for the conflict to end as soon as possible, saying it was concerned by the "tragic events in Ukraine."

On Thursday, the United States and Britain announced sanctions on more oligarchs, following on from EU measures.

In Germany, his luxury yacht worth nearly $600 million was moored at a Hamburg shipyard. Hamburg's economic authority said there were no plans for the vessel to be delivered to its owner.

Kremlin spokesperson Dmitry Peskov has also been hit with U.S. sanctions. Visa restrictions will be imposed on 19 Russian oligarchs, their family members and associates, the White House said.

Kyiv and other major cities are still controlled by Ukraine but the United Nations said one million people have now fled, mainly seeking refuge in Poland and other neighbours to the west.

As shelling and rockets strikes continued, the government sought more military assistance, something some countries fear could provoke Russia and escalate the conflict.

"How can partners who have not yet provided Ukraine with warplanes sleep, given children are sitting in basements under bombardment..?" foreign minister Dmytro Kuleba wrote on Twitter.

The United States has warned the crisis is a threat to the rules-based order.

It agreed on Thursday with India, Australia and Japan on the need to avoid a similar situation in the Indo-Pacific, where there is increased concern about China moving against Taiwan, a self-ruled island it claims.

But China, which abstained in a vote to reprimand Russia at the United Nations on Wednesday, is the largest shareholder at the Asian Infrastructure Investment Bank which said on Thursday it was suspending all activities relating to Russia and Belarus.

Only Belarus, Eritrea, Syria and North Korea voted with Russia but in Moscow, Putin brushed aside worldwide condemnation and hailed his soldiers as heroes.

"I want to say that the special military operation is proceeding strictly in line with the timetable," he said.

Western military analysts believe a Russian battle plan that aimed for a swift advance and capture of Kyiv has faltered, forcing a change.

The main assault force - a huge convoy of tanks, artillery and logistics support - has been halted for days north of Kyiv.

The official said they were also just outside Kharkiv, Ukraine's second city of 1.5 million people which has seen swathes blasted into rubble.

'GIVE ME A MOLOTOV COCKTAIL'

The fate of Kherson, a southern Dnipro River port, was not clear. Russian tanks had entered on Wednesday and it was reported to have been captured.

But the U.S. official said Washington believed there was still fighting and it was not ready to say it had fallen.

Russia has acknowledged nearly 500 of its soldiers killed since Putin sent his troops over the border on Feb. 24. Ukraine says it has killed nearly 9,000, though this cannot be confirmed.

Military analysts say Russia's columns are now confined to roads as spring thaw turns Ukrainian ground to mud. Each day the main attack force lies stuck on the highway north of Kyiv, its condition deteriorates, said Michael Kofman, an expert on the Russian military at the Wilson Center in Washington, D.C.

Emergency services in the eastern Chernihiv region said 33 bodies had been pulled from the rubble of a Russian air strike. Earlier, governor Viacheslav Chaus said at least nine people had been killed in an air strike that hit homes and two schools.

Two cargo ships came under apparent attack at Ukrainian ports. Six crew members were rescued at sea after an Estonian-owned ship exploded and sank off Odessa, and at least one crew member was killed in a blast on a Bangladeshi ship at Olvia.

In Borodyanka, a town 60 km northwest of Kyiv where locals repelled a Russian assault, burnt-out hulks of Russian armour were scattered on a highway, surrounded by buildings blasted into ruins.

"They started shooting from their APC towards the park in front of the post office," a man said in the apartment where he was sheltering with his family, referring to a Russian armoured personnel carrier.

"Then those bastards started the tank and started shooting into the supermarket which was already burned. It caught fire again. An old man ran outside like crazy, with big round eyes, and said 'give me a Molotov cocktail! I just set their APC on fire!'" 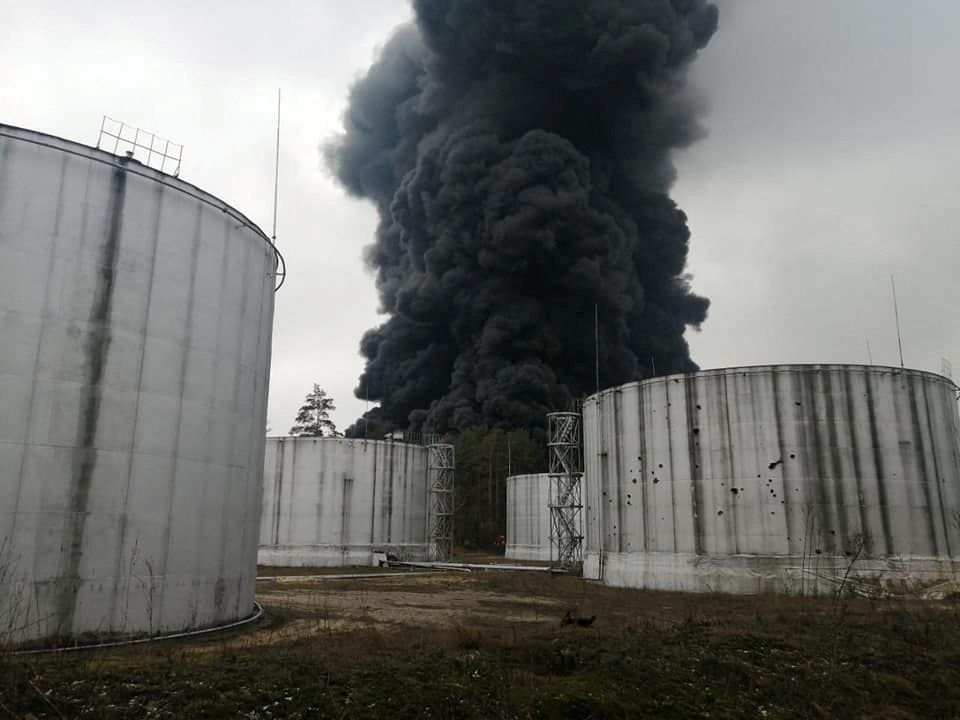 Smoke rises from the oil depot, which, according to local authorities, was damaged by shelling in Chernihiv, Ukraine, in this handout picture released March 3, 2022. Press service of the Ukrainian State Emergency Service/Handout via REUTERS ATTENTION EDITORS - THIS IMAGE HAS BEEN SUPPLIED BY A THIRD PARTY. 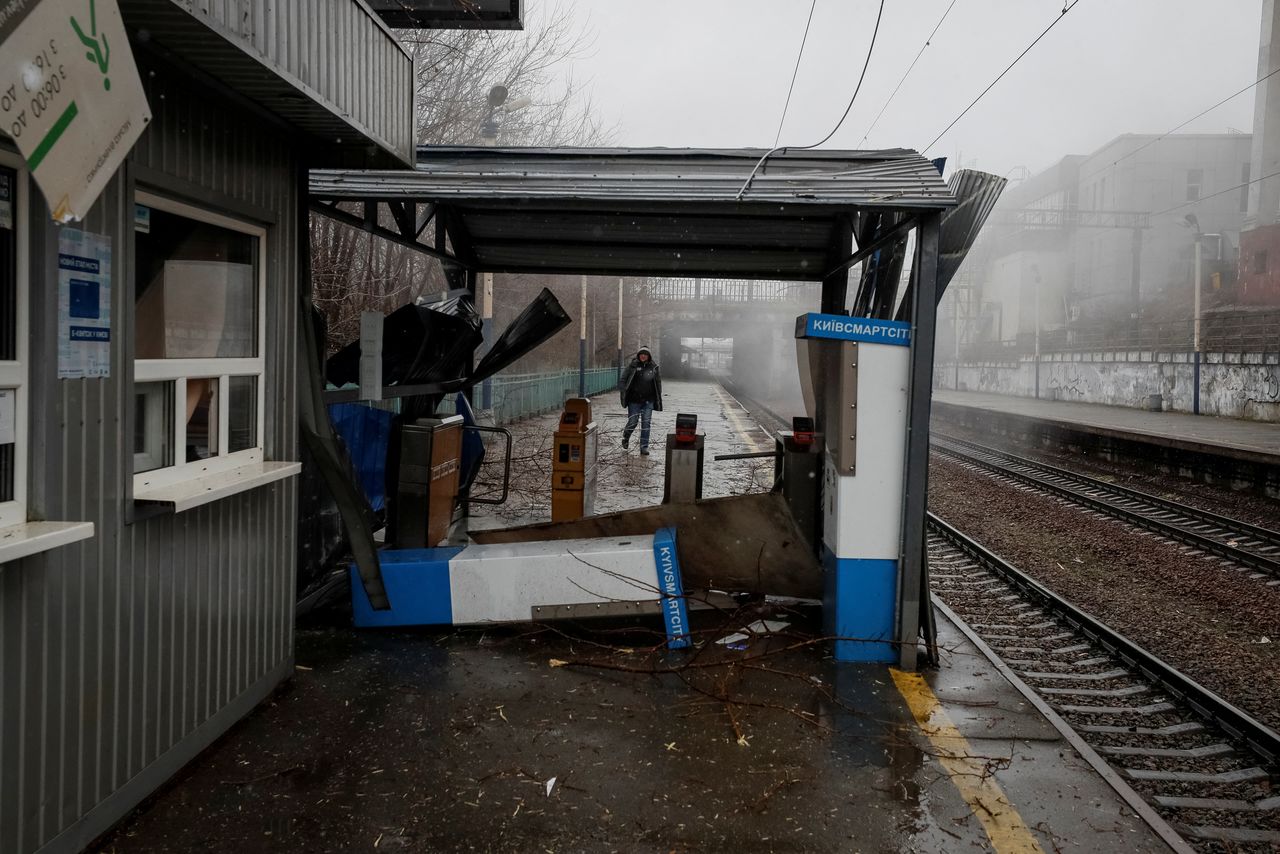 A man is seen near a Ukraine's railway administration building damaged by recent shelling near a central train station in Kyiv, Ukraine March 3, 2022. REUTERS/Gleb Garanich 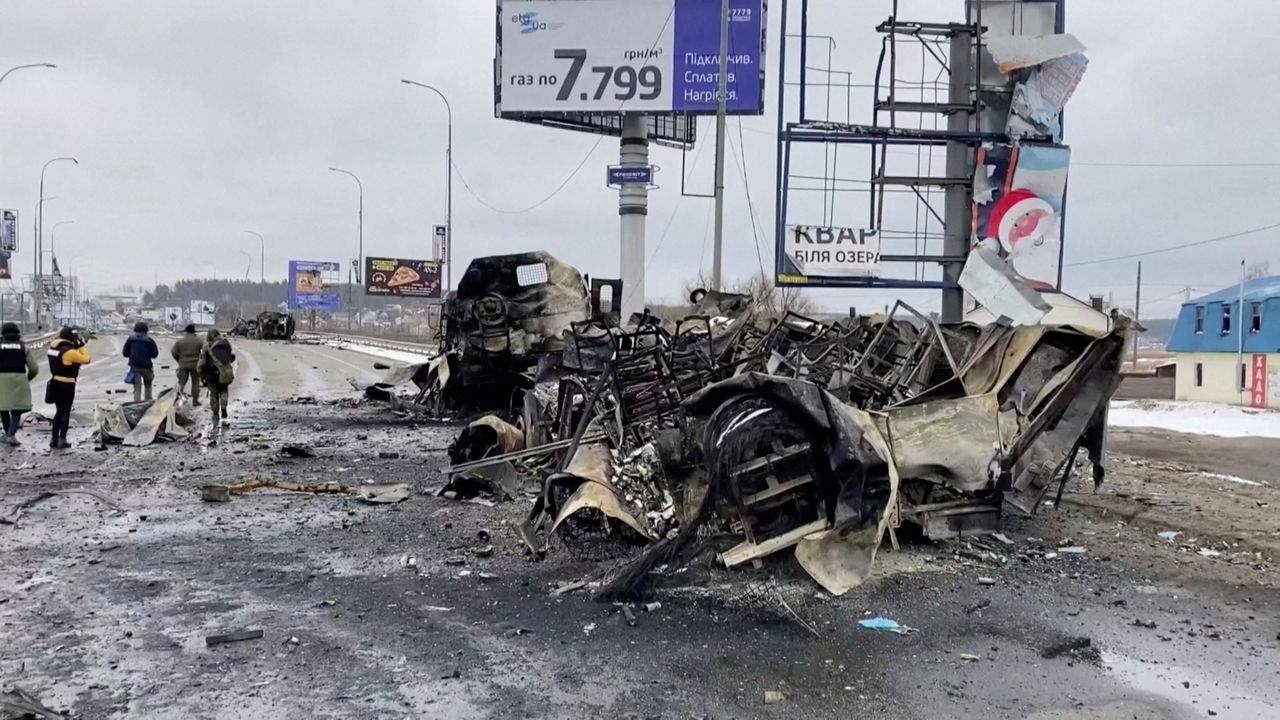 People walk past a destroyed vehicle on a road, amid Russia' ongoing invasion of Ukraine, in Bucha, Ukraine, March 2, 2022 in this still image taken from video. Video taken March 2, 2022. REUTERS/via Reuters TV 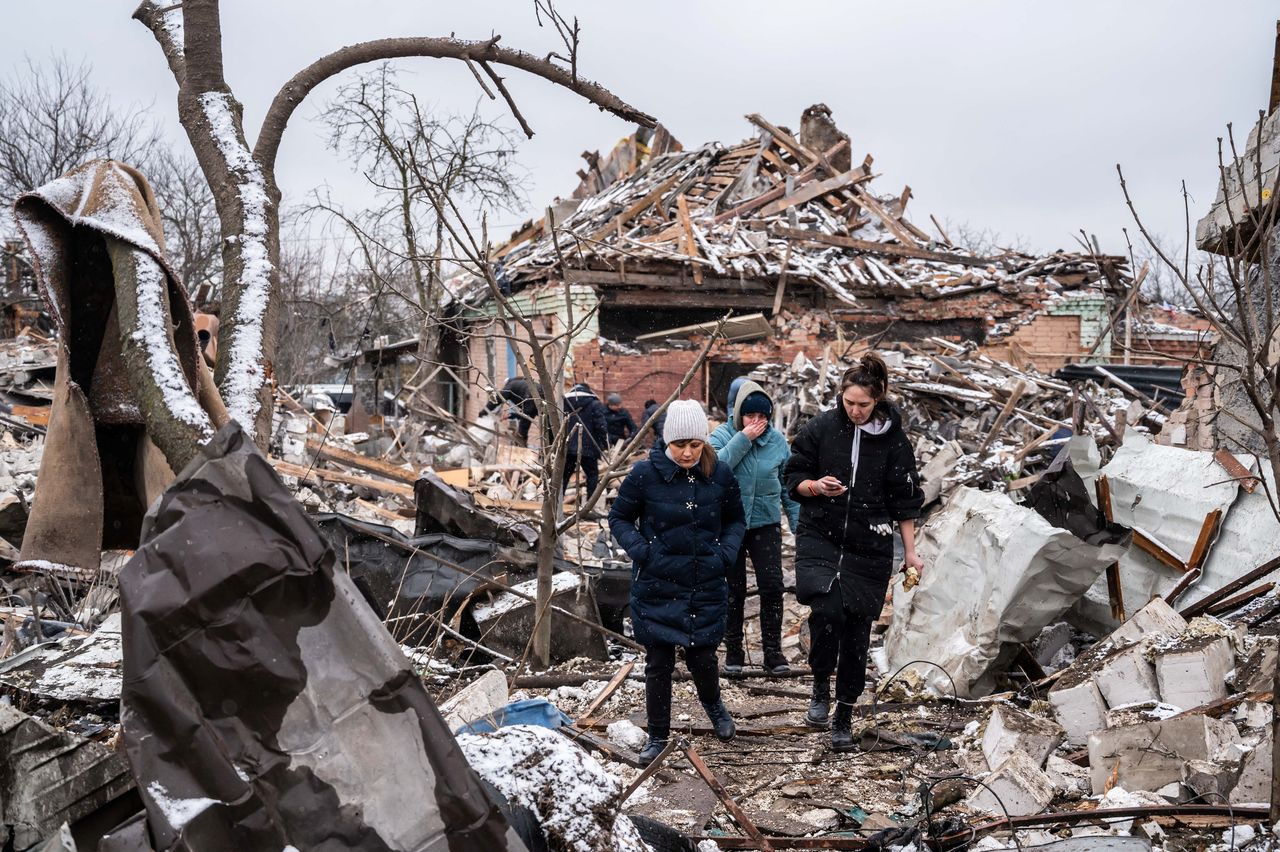 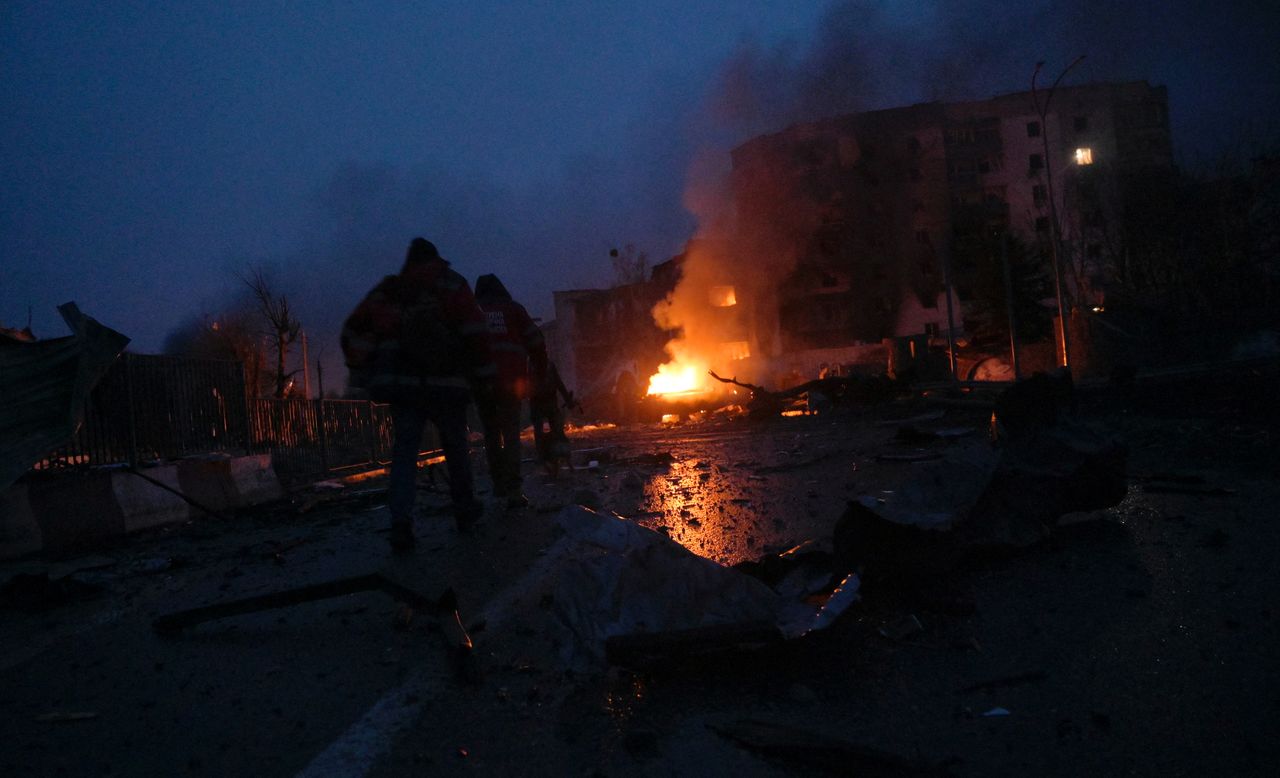 Paramedics walk at the residential area following recent shelling, as Russia's invasion of Ukraine continues, in the settlement of Borodyanka in the Kyiv region, Ukraine March 2, 2022. REUTERS/Maksim Levin