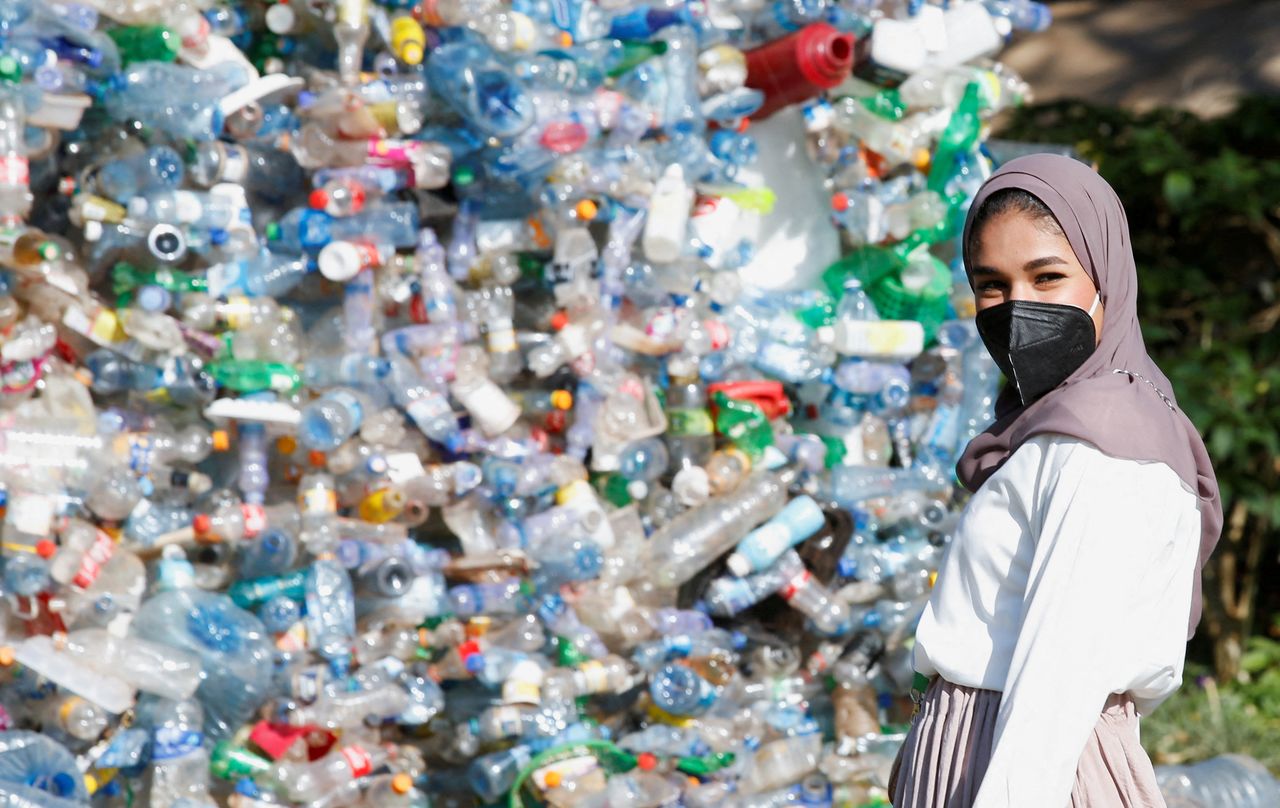 FILE PHOTO: A delegate poses for a photograph near a 30-foot monument dubbed "turn off the plastic tap" by Canadian activist and artist Benjamin von Wong, made with plastic waste, at the venue of the Fifth Session of the United Nations Environment Assembly (UNEA-5), at the United Nations Environment Programme (UNEP) Headquarters in Gigiri, Nairobi, Kenya February 28, 2022. REUTERS/Monicah Mwangi

By John Geddie and Joe Brock

NAIROBI (Reuters) - When the United Nations agreed a landmark deal to create the world's first ever global plastic pollution treaty this week, every party was quick to claim a victory, from industry lobbyists to environmental activists. That could spell trouble.

The agreement to finalise such a treaty by 2024, which the U.N. Environment Assembly called "historic" and the most significant green pact since the 2015 Paris climate accord, was drafted in broad strokes.

That's given an intergovernmental negotiating committee the mammoth task of reaching consensus on key issues like how to address soaring production of single-use plastic, which is made from oil and is a growth market in petrochemical hubs like the United States, China, Saudi Arabia and Japan.

Governments are under pressure to curb the proliferation of throwaway plastic, from coffee cups to takeaway food containers to bubble wrap. An IPSOS survey released last month found three out of four people support banning single-use plastic, much of which ends up clogging the world's oceans and urban waterways.

But there is a divide between big plastic producers who want to focus on waste management and recycling, and the European Union and some developing nations pushing for plastic production restrictions, according to interviews with delegates, industry officials and environmental groups.

The U.N. negotiating committee, made up of representatives from member states, will hold five meetings over the next two years to try and thrash out a deal.

"The big fight will be around production and whether countries are willing to put in place global regulations," said Eirik Lindebjerg, global plastics policy manager at WWF.

"The wording of the resolution commits countries to find solutions to these issues but doesn't provide a clear direction on how."

By 2050, the plastics industry could account for 20% of all oil consumption, according to the U.N. Environment Programme.

On this trajectory, ocean plastic pollution will quadruple by 2050, some marine species will become extinct and many sensitive ecosystems like coral reefs and mangrove swamps will be irreparably damaged, according to an analysis of more than 2,000 scientific studies published by WWF last month.

The petrochemicals industry, which is forecast to double production of virgin plastic resin by 2040, says better recycling and trash collection is the answer.

Harris said the industry was "very pleased" with the outcome of the talks because it will allow countries to decide how they want to tackle waste, like investing in recycling technology.

The United States, the world's top per capita single-use plastic polluter and home to several of the world’s largest chemicals companies, has not made its position clear on whether it will put limits on production.

"The goal here is to give countries the flexibility to develop national action plans that work best for them," said Monica Medina, the head of the U.S. delegation in Nairobi.

"Overly prescriptive 'top down' approaches can sometimes get in the way of actually having technological innovation."

A series of investigations by Reuters last year showed that new recycling technologies promoted by the plastic industry have suffered major setbacks while there has been a rise in burning plastic trash as a cheap fuel.

Less than 10% of plastic is recycled, partly because new plastic produced by the oil industry is so plentiful and cheap.

"It is naive to think that just recycling is going to help. We need to start first of all with prevention measures," the EU’s environment chief Virginijus Sinkevicius told Reuters, adding he wanted to see curbs on virgin plastic production.

Yoshihide Hirao, a Japanese environmental official involved in the treaty negotiations, told Reuters that Tokyo preferred to promote the use of alternative materials like bio-plastics rather than restrict virgin material.

“Some countries may choose a more stringent approach. That’s fine, but in our view, it is probably up to national circumstances,” he said, adding that Japan’s large petrochemical sector had been receptive to the country's “softer approach”.

The treaty terms will also have a bearing on consumer goods giants that currently sell thousands of products in single-use packaging, including Coca-Cola, PepsiCo, Unilever and Nestle

These companies, which have EU-mandated targets to increase the use of recycled material in packaging, say they want a treaty that reduces virgin production and use.

The head of the U.N. Environment Programme Inger Andersen told reporters this week that reducing plastic production will be one of the most “complex” issues for negotiators to overcome.

Environmental groups are expecting a tough two years of negotiations.

"This question of plastic production is going to be a minefield," said Anne Aittomaki, strategic director of Danish environmental non-profit Plastic Change.

"I think people don't know what they have signed up for."

(Reporting by John Geddie in Nairobi and Joe Brock in Singapore; Editing by Raju Gopalakrishnan)