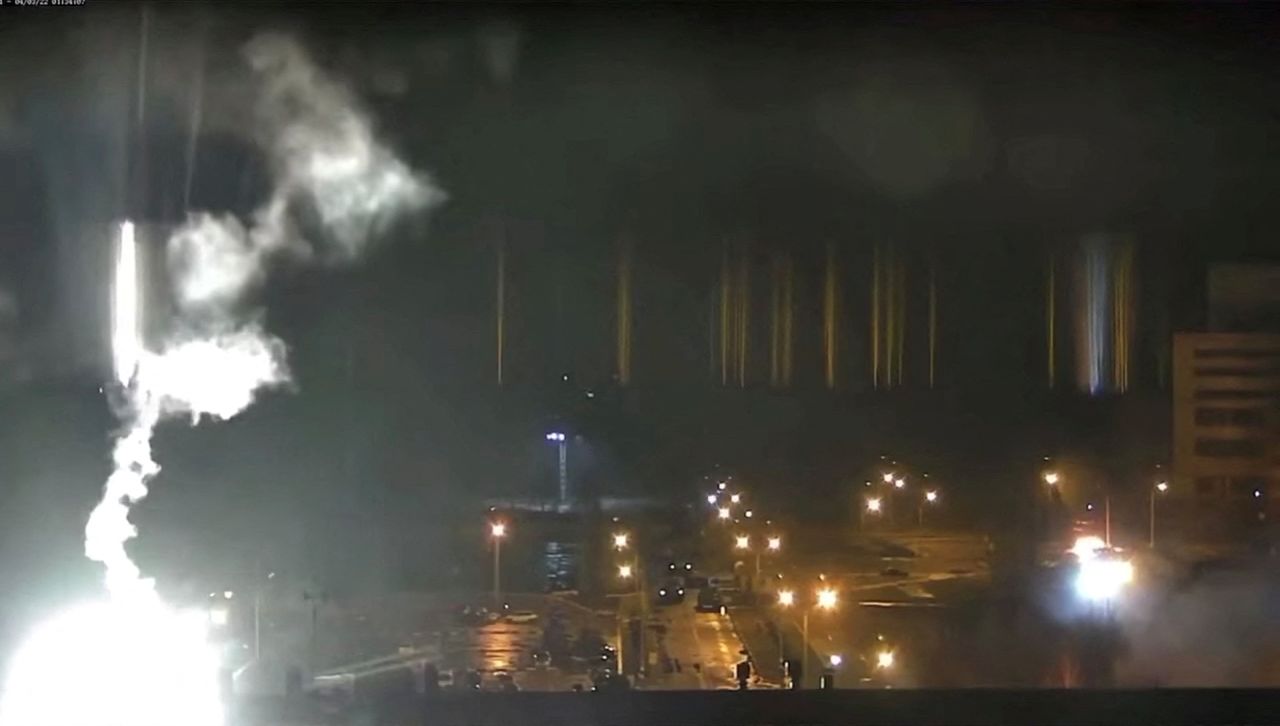 Surveillance camera footage shows a flare landing at the Zaporizhzhia nuclear power plant during shelling in Enerhodar, Zaporizhia Oblast, Ukraine March 4, 2022, in this screengrab from a video obtained from social media. Zaporizhzhya NPP via YouTube/via REUTERS

By Mari Saito and Ju-min Park

TOKYO/SEOUL (Reuters) -Russia's seizure of a Ukrainian nuclear power plant has raised fears about access to radiation data, atomic experts said, although they stressed they did not see immediate radiological risks and a U.N. watchdog said its reactors were undamaged.

Russia has blamed the attack on the plant on Ukrainian saboteurs.

In a press conference on Friday, International Atomic Energy Agency (IAEA) chief Rafael Grossi said no damage had been done to the Zaporozhzhia reactors and Ukrainian staff continued to operate the nuclear facilities while Russian forces controlled the area.

The radiation monitoring system at the site was functioning normally and there had been no release of radioactive material, Grossi said.

Park Jong-woon, a professor at the energy and electric engineering department of Dongguk University, said he did not think there was an immediate radiological threat posed by the plant's seizure, but added Russia could disrupt public access to radiation data to sow confusion.

"They can make people wonder, freak them out and spread fear," said Park, who worked at state-run power operators between 1996 and 2009, helping build nuclear reactors.

The fire at the Zaporizhzhia facility has since been extinguished but it had raised "a very real concern" about the potential for disaster, Edwin Lyman, director of nuclear power safety at the Union of Concerned Scientists in Washington D.C., said.

"For example, the prospect of a widespread fire, although that appears not to be the case, could disable the plant's electrical systems and lead to an event very much like Fukushima if cooling is not restored in time," he said.

More broadly, experts expressed worries about access to real time data necessary for gauging the radiation situation on the ground.

The official website for radiation readings at the Zaporizhzhia site was not immediately accessible as of Friday afternoon, Lyman said.

Since last week's takeover by Russian forces of Chernobyl - the site of the world's worst nuclear disaster and now a defunct power plant - monitoring of radiation levels there has been more difficult, according to Kenji Nanba, who heads Fukushima University's Institute of Environmental Radioactivity and has been involved in a joint research project with Ukrainian scientists.

He said an official Ukrainian website with hourly radiation measurements from Chernobyl's exclusion zone had been down for days and that another site had gradually lost most of its real-time readings.

Although the damaged Chernobyl reactor is stable and is covered under a large new containment structure, Nanba said it was still crucial for researchers like himself to track radiation data at the site to make sure there were no sudden changes.

Elevated radiation readings were recorded near Chernobyl after it was taken over by Russian forces last week, but experts say those were most likely caused by military activity that kicked up irradiated dirt and earth into the air.

The fourth reactor at Chernobyl exploded in April 1986 during a botched safety test, sending clouds of radiation billowing across much of Europe. Estimates for the numbers of direct and indirect deaths from the disaster vary from the low thousands to as many as 93,000 extra cancer deaths worldwide.