By Pavel Polityuk and Carlos Barria

LVIV/IRPIN, Ukraine (Reuters) - A Western ban on Russian oil imports may more than double the price to $300 a barrel and prompt the closure of the main gas pipeline to Germany, Moscow warned on Monday, as talks on Ukraine hardly advanced amid efforts to agree on civilian safe passage.

Russia's invasion, the biggest attack on a European state since World War Two, has created 1.7 million refugees, a raft of sanctions on Moscow, and fears of wider conflict in the West unthought-of for decades.

Sieges and the bombing continued as Kyiv rejected possible humanitarian corridors to Russia and Belarus, but said some limited progress had been made on agreeing logistics for the evacuation of civilians.

Moscow would give the residents of the Ukrainian cities of Sumy and Mariupol the choice of moving elsewhere in Ukraine on Tuesday, setting a deadline in the early hours for Kyiv to agree, Russian news agencies reported.

Seeking to ratchet up the pressure on Russian President Vladimir Putin, the United States said Washington and its European allies were considering banning Russian oil imports. Oil prices spiked to their highest levels since 2008.

"A rejection of Russian oil would lead to catastrophic consequences for the global market," said Russian Deputy Prime Minister Alexander Novak, saying the price could more than double to over $300 per barrel.

U.S. President Joe Biden held a video conference call with the leaders of France, Germany and Britain as he pushed for their support on the ban.

But if need be the United States is willing to move ahead without allies in Europe, two people familiar with the matter told Reuters. Many countries on the continent are heavily reliant on Russian energy.

Germany last month froze the certification of Nord Stream 2 that was due to pipe gas from Russia to Germany.

"We have every right to take a matching decision and impose an embargo on gas pumping through the Nord Stream 1 gas pipeline," said Novak.

The Russian economy, banking system, and currency have been under intense pressure as punishment for the assault on Ukraine. The country will be excluded from all of JPMorgan's fixed income indexes, the bank said in the latest such development on Monday.

More than 1.7 million Ukrainians have fled to Central Europe since the conflict began on Feb. 24, the United Nations refugee agency said on Monday.

After the third attempt to ease the bloodshed at talks in Belarus, a Ukrainian negotiator said that although small progress on agreeing logistics for the evacuation of civilians had been made, things remained largely unchanged.

"As of now, there are no results that significantly improve the situation," Mykhailo Podolyak said.

"We hope that from tomorrow these corridors will finally work," he said.

Russia has proposed two corridors inside of Ukraine, according to Interfax.

Escape routes to Russia and Belarus, its close ally, were earlier called "completely immoral" by a spokesperson for Ukrainian President Volodymyr Zelenskiy.

A fourth round of talks are due soon, Russian negotiator Leonid Slutsky told Russian state television.

"Our president is not scared of anything, including a direct meeting with Putin," said Ukraine's foreign minister Dmytro Kuleba late on Monday.

French President Emmanuel Macron, who spoke with Putin multiple times last month in the run-up to the invasion, said he saw no impeding breakthrough.

"I don't think that in the coming days and weeks, there will be a real negotiated solution", he said.

The general staff of Ukraine's armed forces said Russian forces were "beginning to accumulate resources for the storming of Kyiv", a city of more than 3 million, after days of slow progress in their main advance south from Belarus.

Outside the capital, attacks continued.

A Russian strike on a bread factory killed 13 in the town of Makariv in the Kyiv region, Ukrainian officials said. Reuters could not verify the details. Russia denies targeting civilians.

In the encircled southern port city of Mariupol, hundreds of thousands of people remained trapped without food and water under regular bombardments.

Deputy mayor Sergei Orlov told CNN that authorities were ready to evacuate 6,000 people on Saturday but Russians had bombed buses that were to transport them. Moscow has accused the Ukrainians of blocking the planned evacuations.

In the eastern city of Kharkiv, police said the total death toll from the Russian bombardment was 143 since the start of the invasion. It was not possible to verify the toll.

In Irpin, people picked their way over the twisted ruins of a large bridge.

"It's like a disaster," a young woman leaving with her children told Reuters.

Ukraine said on Monday its forces had retaken control of the town of Chuhuiv in the northeast after heavy fighting and of the strategic Mykolayiv airport in the south. Neither could immediately be verified.

In a humanitarian update, the United Nations described one psychiatric hospital 60 km (40 miles) from Kyiv running out of water and medicine with 670 people trapped inside, including bedridden patients with severe needs.

U.S. congressional negotiators on Monday were nearing a deal on a bill to provide Ukraine with billions of dollars in emergency aid.

A senior U.S. defence official said Putin had now deployed into Ukraine nearly 100% of the more than 150,000 forces that he had pre-staged outside the country before the invasion.

Moscow has acknowledged nearly 500 deaths among its soldiers, but Western countries say the true number is much higher and Ukraine says it is many thousands.

Death tolls cannot be verified, but footage filmed across Ukraine shows burnt-out wreckage of Russian tanks and armour, and parts of Ukrainian cities reduced to rubble by Russian strikes. 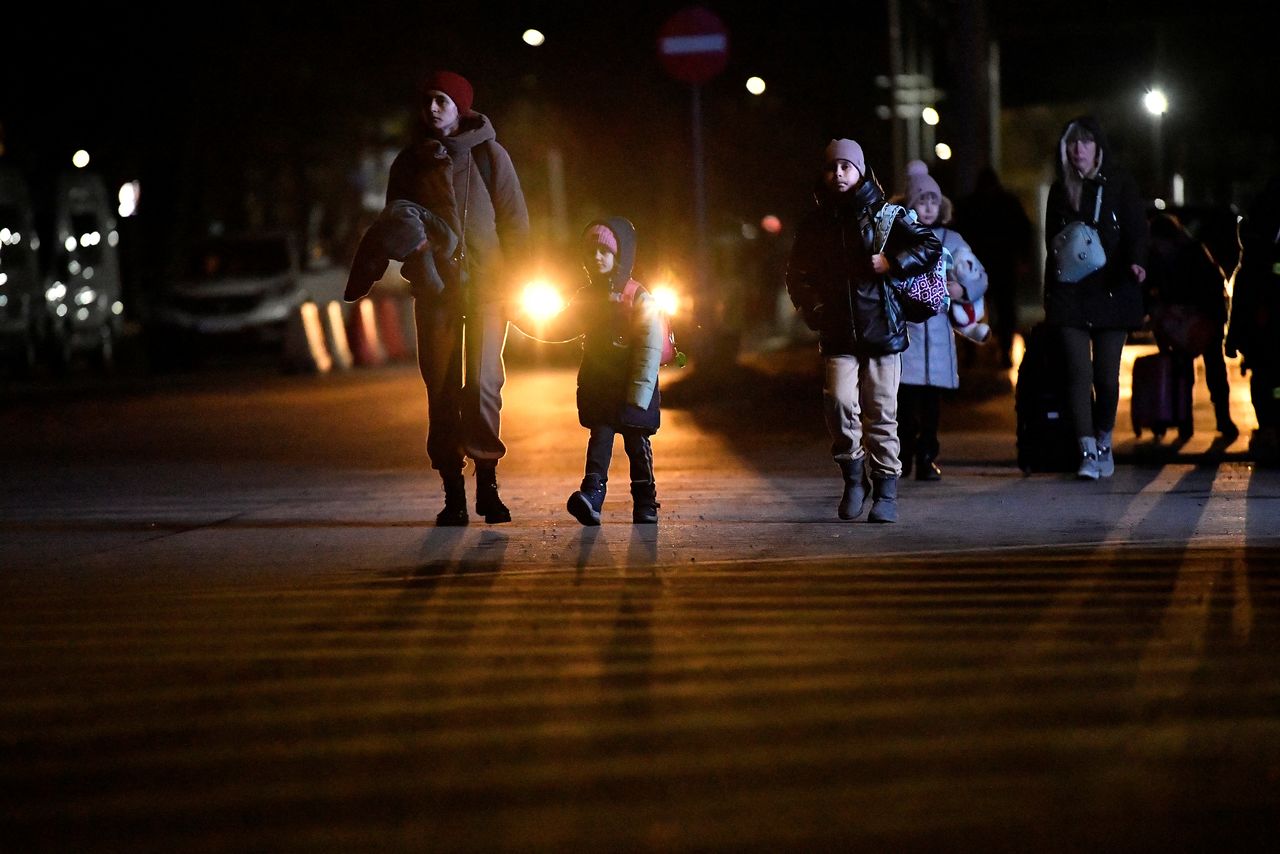 A family walk after fleeing from Ukraine to Romania, following Russia's invasion of Ukraine, at the border crossing in Siret, Romania, March 6, 2022. REUTERS/Clodagh Kilcoyne 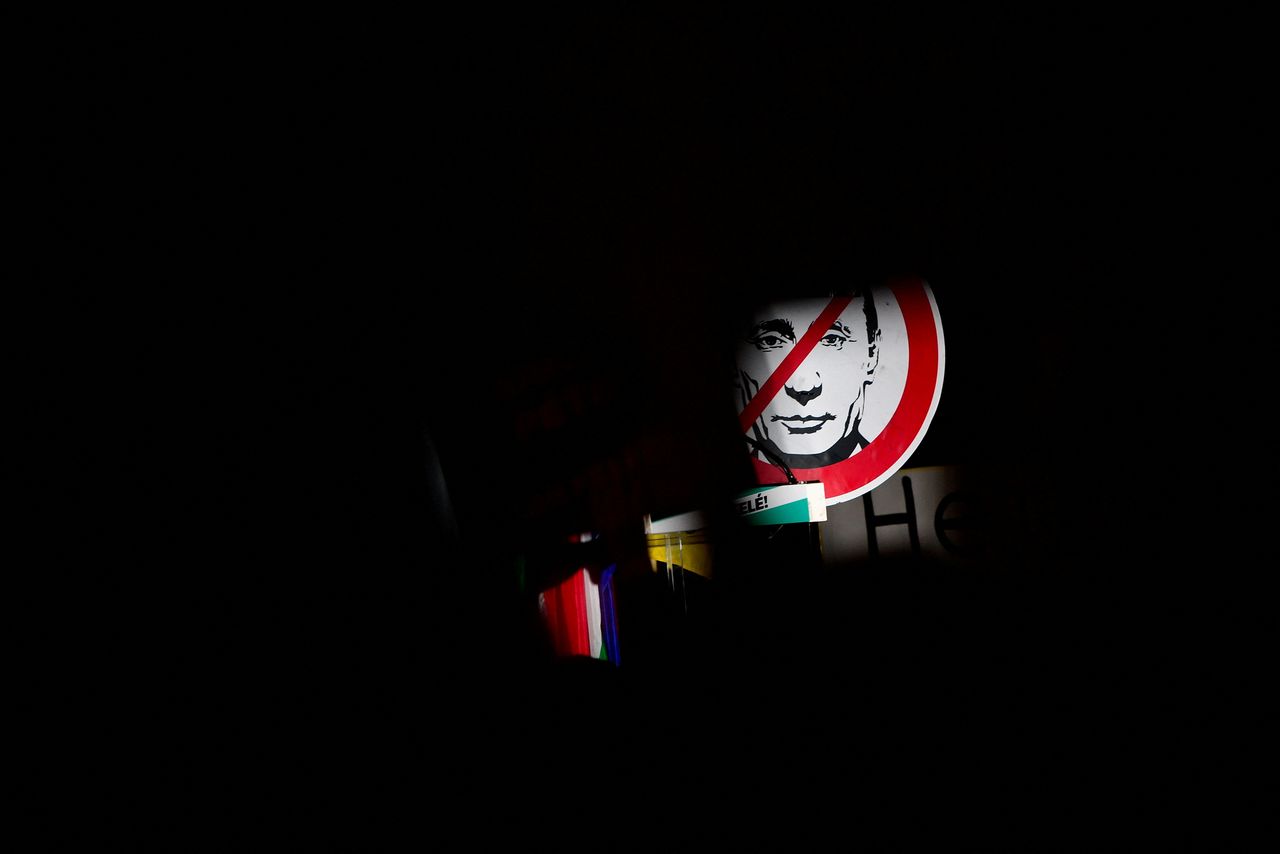 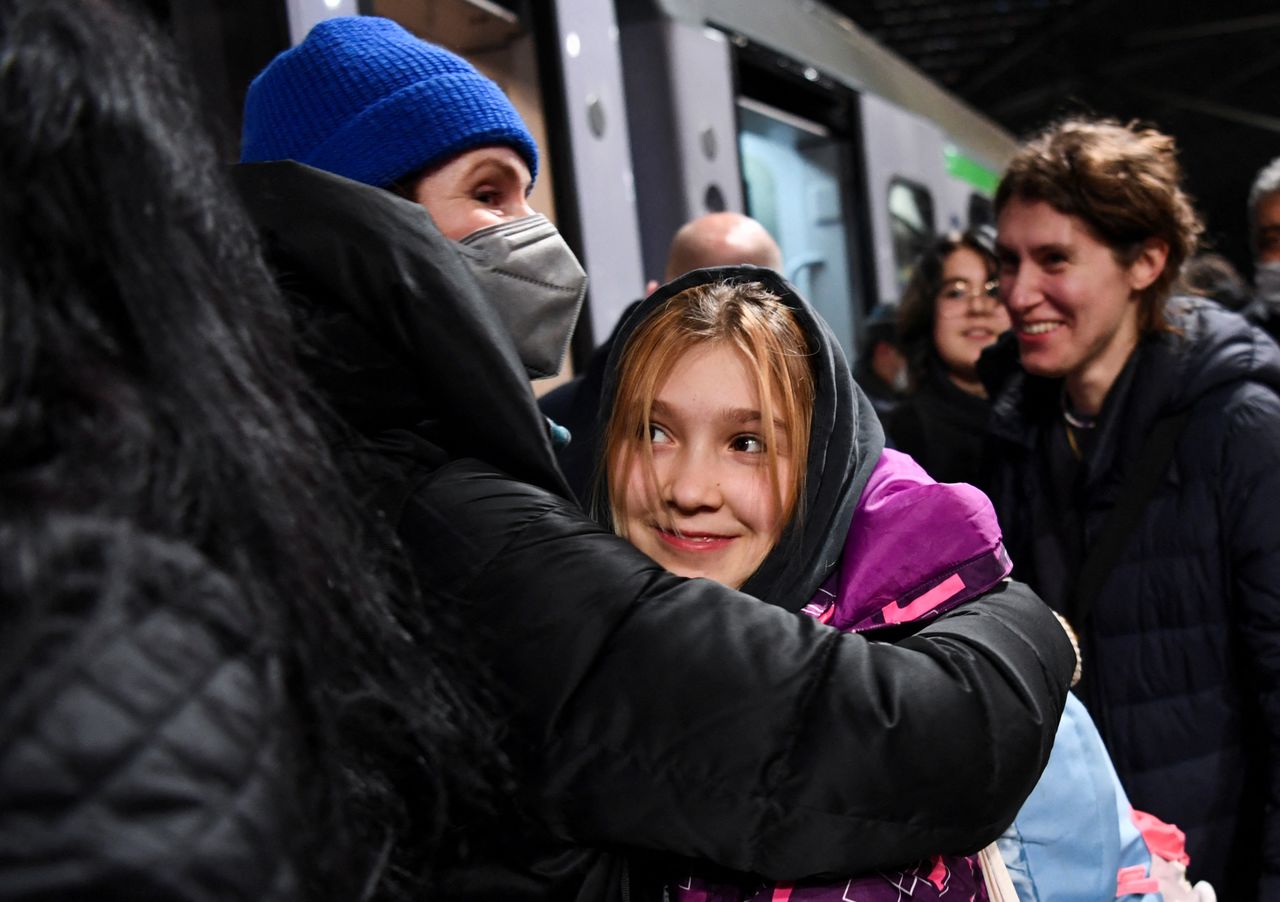 A woman welcomes a child who has arrived at Berlin's central station on a train from Poland, amid Russia's invasion of Ukraine, in Berlin, Germany, March 6, 2022. REUTERS/Annegret Hilse 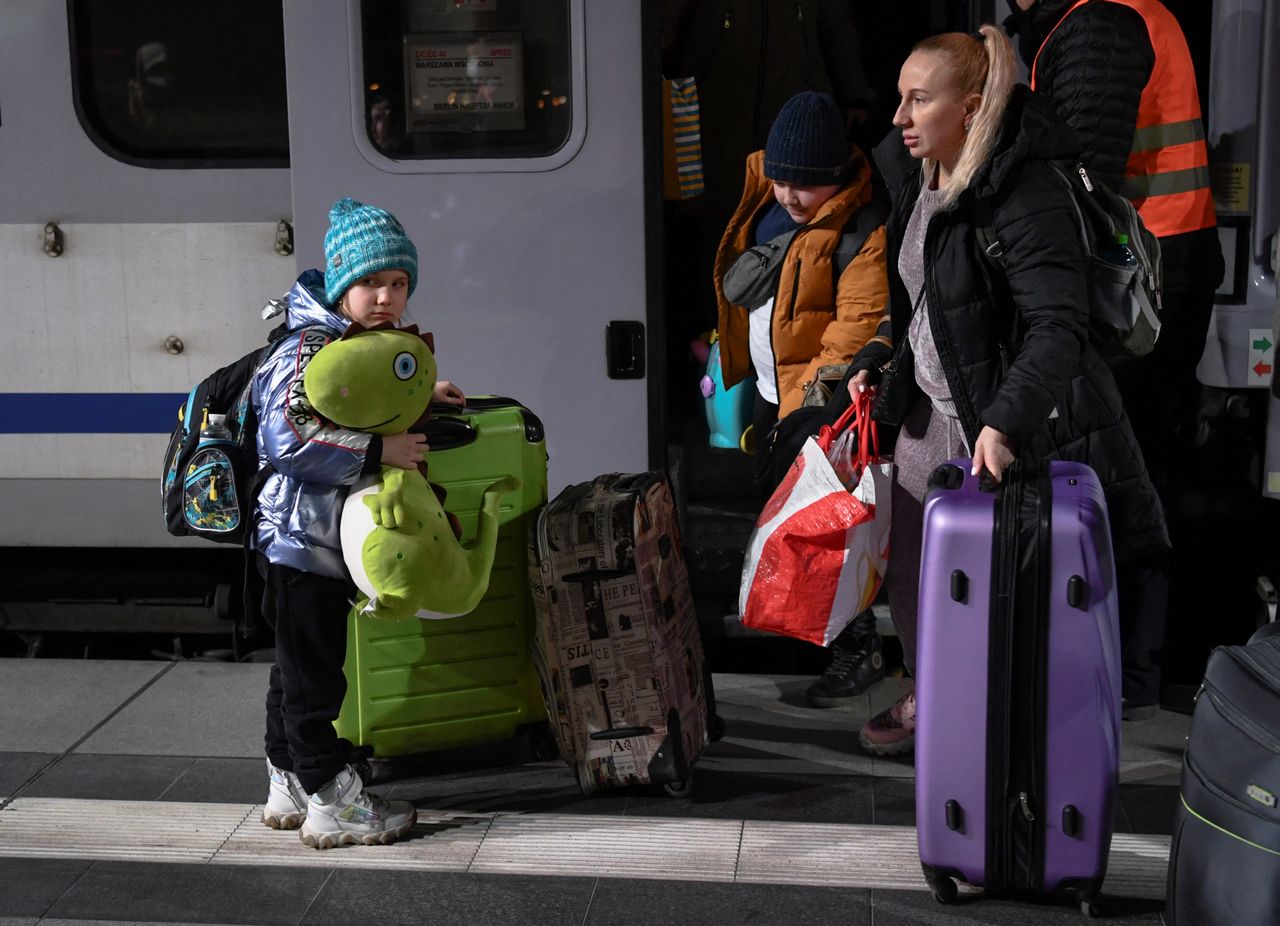 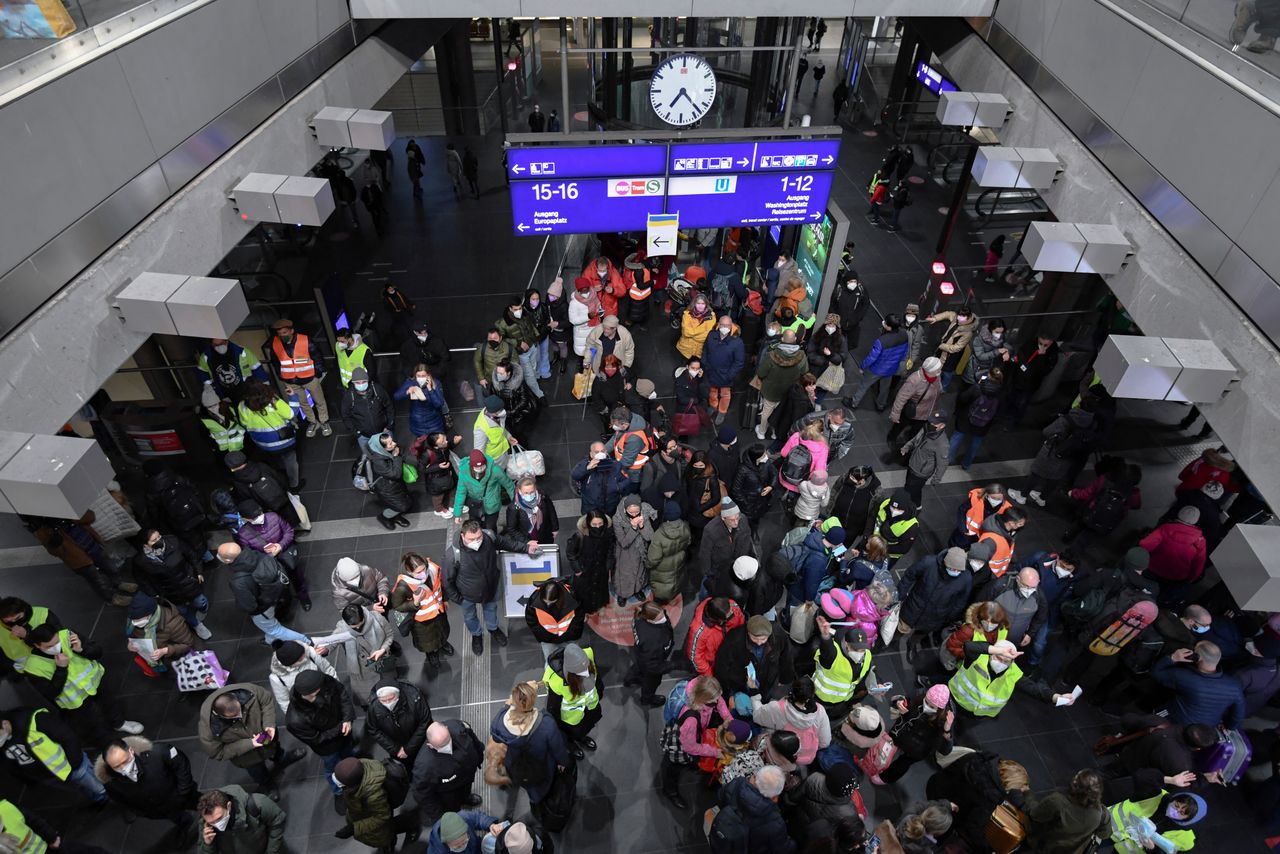 Volunteers in high-visibility clothing help refugees fleeing Russia's invasion of Ukraine who have arrived on a train from Poland at the central station in Berlin, Germany, March 6, 2022. REUTERS/Annegret Hilse