How sanctions against Russia are battering the global aviation industry

(Reuters) - Russia's size and close integration into the global aviation industry since the end of the Cold War means sanctions related to its invasion of Ukraine are having outsized consequences relative to earlier freezes on Iran and North Korea.

Manufacturers, lessors, insurers and maintenance providers to Russian carriers like Aeroflot, S7 Airlines and AirBridgeCargo are among those outside Russia that are hit directly by sanctions.

Foreign airlines, meanwhile, are reeling from higher oil prices and longer routes needed to bypass airspace over Russia that are expected to drive up ticket prices and air freight rates.

Russian airlines have been highly reliant on the global aircraft leasing industry to modernise their fleets with the latest Airbus and Boeing planes.

Russian carriers have 980 passenger jets in service, of which 777 are leased, according to analytics firm Cirium.

Of these, 515 jets with an estimated market value of about $10 billion are rented from foreign firms such as AerCap and Air Lease.

The European Union has given leasing companies until March 28 to wind up current rental contracts in Russia.

But getting the planes back could be challenging due to airspace bans, potential SWIFT payment transfer issues and industry concerns the Russian government could nationalise the fleet to maintain domestic capacity.

Even if the planes are returned quickly, the huge number needing to be placed elsewhere could depress rental prices globally, analysts say.

Russian airlines have also been cut off from the insurance and reinsurance markets in the European Union and Britain.

An insurance industry source said it was unclear if lessors unable to repossess planes would be covered for losses under their own policies, which typically contain clauses cancelling coverage in the event of sanctions.

Legal action may be needed to settle the issue, said the source, who was not authorised to speak publicly.

Russian airlines have 62 planes on order with Airbus and Boeing, according to aviation consulting firm IBA, and those deliveries will be barred.

Manufacturers and maintenance firms are also banned from providing parts and services for the existing fleet.

Tass news agency reported the Russian transport ministry had drawn up a draft bill to help airlines until September 2022 that would allow maintenance by third-party firms and suspend all inspections of carriers.

Some aviation executives are concerned that the sanctions prevent planemakers from sharing service bulletins and airworthiness directives that are key for safety.

Viktor Berta, vice president of aviation finance advisory at ACC Aviation, said there was also a high risk that Russian airlines would need to strip parts from their existing fleet once spares run out.

Oil prices have surged to the highest level since 2008 as the United States said it was willing to ban Russian oil imports.

Oil hedging, fuel surcharges and fare increases are among the measures airlines are taking to offset some of the pain at a time when demand remains low due to the pandemic.

High oil prices are in some cases compounded by circuitous flight paths needed to avoid Russian airspace after reciprocal bans that can add up to 3.5 hours of flying.

The biggest impact is on flights between Europe and north Asian destinations like Japan, South Korea and China but other affected routes include those between southeast Asia and Europe and the United States and India.

"Another concern is the impact on international passenger demand in some markets, resulting in a setback in the overall recovery of international air travel," he added.

(Reporting by Jamie Freed in Sydney; additional reporting by Allison Lampert in Montreal and Alexander Cornwell in Dubai; Editing by Michael Perry) 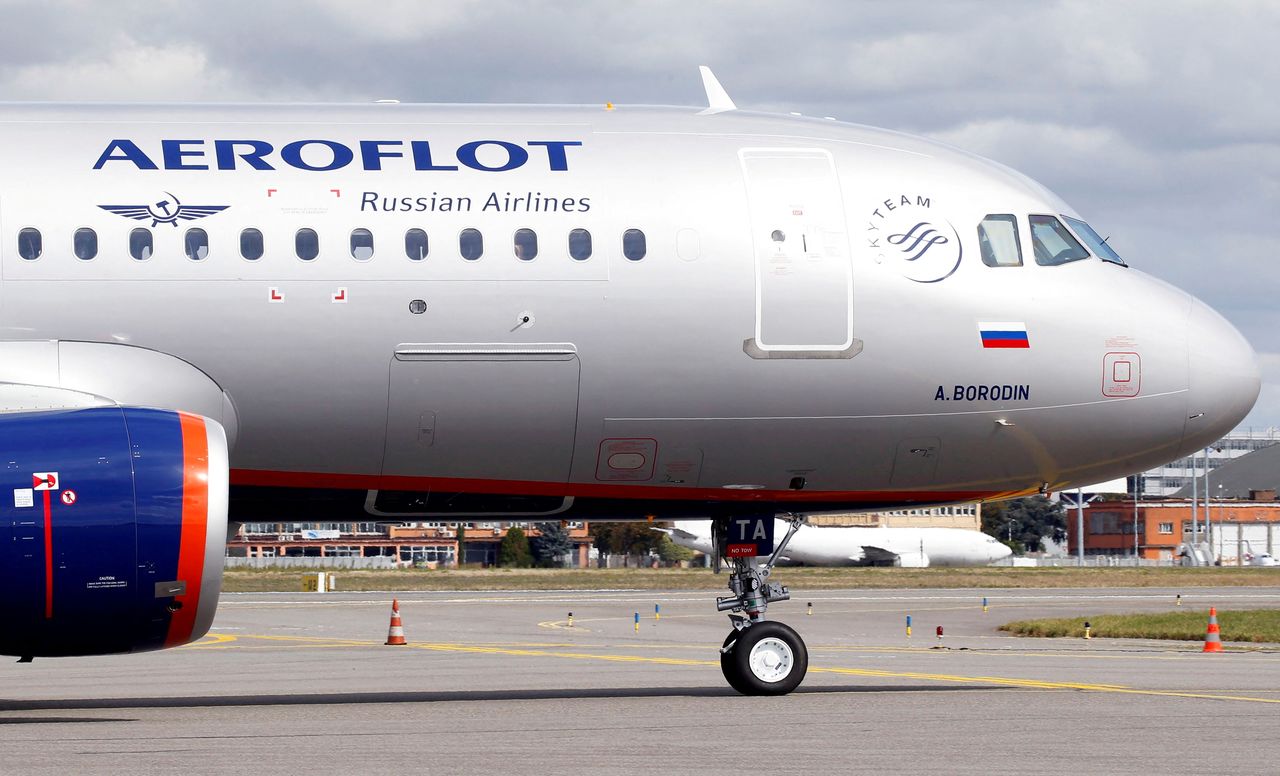 FILE PHOTO: The logo of Russia's flagship airline Aeroflot is seen on an Airbus A320-200 in Colomiers near Toulouse, France, September 26, 2017. REUTERS/Regis Duvignau 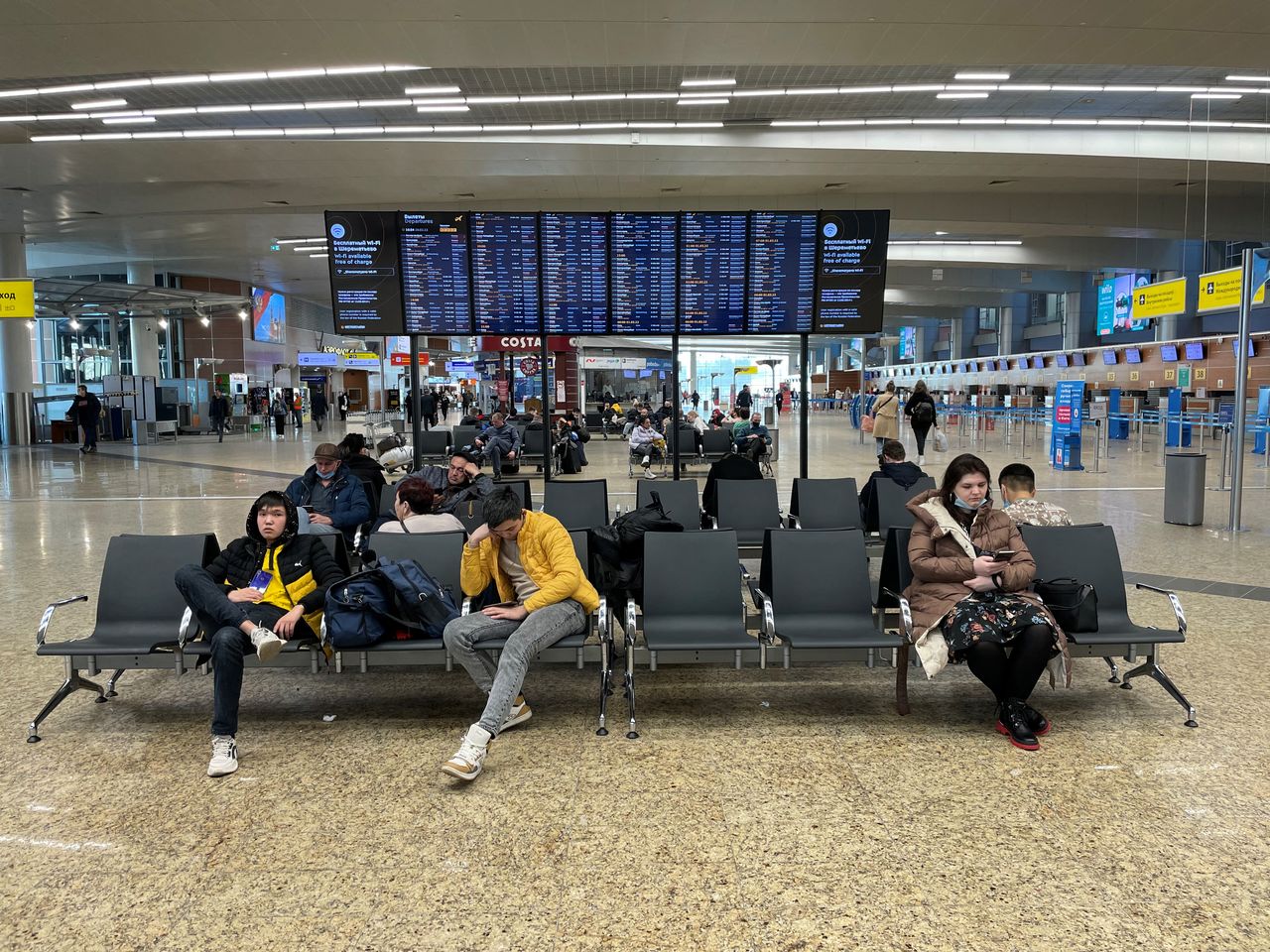 FILE PHOTO: Passengers are seen at Sheremetyevo airport, after Russia closed its airspace to airlines from 36 countries in response to Ukraine-related sanctions targeting its aviation sector, in Moscow, Russia February 28, 2022. REUTERS/Stringer