By Steve Holland and Pavel Polityuk

WASHINGTON/LVIV, Ukraine (Reuters) - A U.S. ban on imports of Russia's oil ratcheted up punishment for the invasion of Ukraine on Tuesday as McDonald's and Starbucks closed outlets and Moscow promised safe passage for some people to flee.

As the number of refugees created by the biggest assault on a European country since World War Two surpassed 2 million, several of the most internationally famous brands added to the Kremlin's global isolation on the 13th day of the incursion.

McDonald's, a symbol of capitalism that opened in Russia as the Soviet Union fell, and coffeehouse chain Starbucks will temporarily close stores, while Pepsi will stop selling its soft drink brands and Coca-Cola is halting business in the country.

Washington, meanwhile, imposed an immediate ban on imports of Russian energy, sparking a further increase in the oil price, which rose around 4% on Tuesday. Prices have surged more than 30% since Russia's incursion began on Feb. 24. [O/R]

Russia - the world's second-largest exporter of crude - has warned the cost will skyrocket further if the West implements bans.

"The American people will deal another powerful blow to Putin's war machine," he said.

The Kremlin describes its actions as a "special operation" to disarm Ukraine and unseat leaders it calls neo-Nazis.

Ukraine and Western allies call this a baseless pretext for an invasion that has raised fears of wider conflict in Europe and could deal a further hit to the world economy as it tries to recover from the coronavirus pandemic.

Civilians fled the besieged city of Sumy on Tuesday in the first successful "humanitarian corridor" opened since Russia's invasion but Ukraine accused Russian forces of shelling another evacuation route, from Mariupol in the south of the country.

Talks between Kyiv and Moscow over safe passage have previously failed, with Ukraine opposing routes out of the country to Russia or its ally Belarus.

Moscow is ready to provide humanitarian corridors so people can leave capital Kyiv and four other cities - Chernihiv, Sumy, Kharkiv and Mariupol - on Wednesday, Mikhail Mizintsev, head of Russia's National Defence Control Centre, was quoted as saying by the Tass news agency.

"In order to ensure the safety of civilians and foreign citizens, Russia will observe a regime of silence from 10 am Moscow time (0700 GMT) on March 9 and is ready to provide humanitarian corridors," he said. It was unclear if the proposed routes would pass through Russia or Belarus.

Ukrainian President Volodymyr Zelenskiy renewed calls on Tuesday for no-fly zones, something the West has rejected for fears of escalating the conflict.

The United States turned down a surprise Polish offer to transfer MiG-29 fighter jets to a U.S. base in Germany to help replenish Ukraine's air force.

The prospect of flying combat aircraft from NATO territory into the war zone "raises serious concerns for the entire NATO alliance," the Pentagon said.

Instead, the West has focussed its pressure on sanctions, mainly on individuals and financial institutions. Up until now, oil and natural gas had been excluded.

The United States is not a leading buyer of Russian oil and Europeans, who are far more reliant on it, have been reluctant to follow suit.

Britain, however, said it would also phase out the import of Russian oil and oil products by the end of 2022, while the EU published plans to cut its reliance on Russian gas by two thirds this year.

"By promoting sanctions against Russian energy resources, Washington is seeking to occupy the European market," he said in an online post.

In Mariupol, hundreds of thousands of people have been sheltering under bombardment for more than a week. Many tried to leave on Tuesday along a safe corridor but Ukraine's foreign ministry said Russian forces violated a ceasefire and shelled it.

"The situation in Mariupol is apocalyptic," he said.

Russia opened a separate corridor out of the eastern city of Sumy. Buses left for Poltava further west, only hours after a Russian air strike which regional officials said had hit a residential area and killed 21 people. Reuters could not verify the incident.

Russia said 723 people had been evacuated via that corridor, including 576 Indian nationals.

Elsewhere, Ukrainian troops repulsed efforts by Russian forces to enter the eastern city of Kharkiv on Tuesday and foiled a planned operation by 120 Russian paratroopers near the border, regional governor Oleh Synehubov said.

Five people, two of them children, were killed late on Tuesday when Russian planes attacked the town of Malyn, some 100 kilometres (62 miles) northwest of Kyiv, and destroyed seven houses, the state emergency service said in an online post. Reuters was unable to corroborate.

The United Nations human rights office said it had verified 1,335 civilian casualties in Ukraine, including 474 killed and 861 injured, since the invasion began on Feb. 24. The real toll is likely higher, it said.

A total of 2 million people, mostly women and children, have fled, according to the U.N. refugee agency UNHCR.

Western countries say Russia's initial battle plan for a rapid strike to topple Ukraine's government failed early in the war, and Moscow has adjusted tactics for longer sieges of cities.

"The tempo of the enemy's advance has slowed considerably, and in certain directions where they were advancing it has practically stopped," Ukrainian presidential adviser Oleksiy Arestovych told a briefing on Tuesday.

The main Russian assault force heading towards Kyiv has been stuck on a road north of the capital. But to the south, Russia has made more progress along the Black and Azov Sea coasts.

Within Russia, the war has led to a severe new crackdown on dissent, with the last remaining independent media largely shut last week and foreign broadcasters banned.

Russian police arrested at least 100 protesters against the invasion of Ukraine on Tuesday, the OVD-Info monitoring group said. Police made no comment. 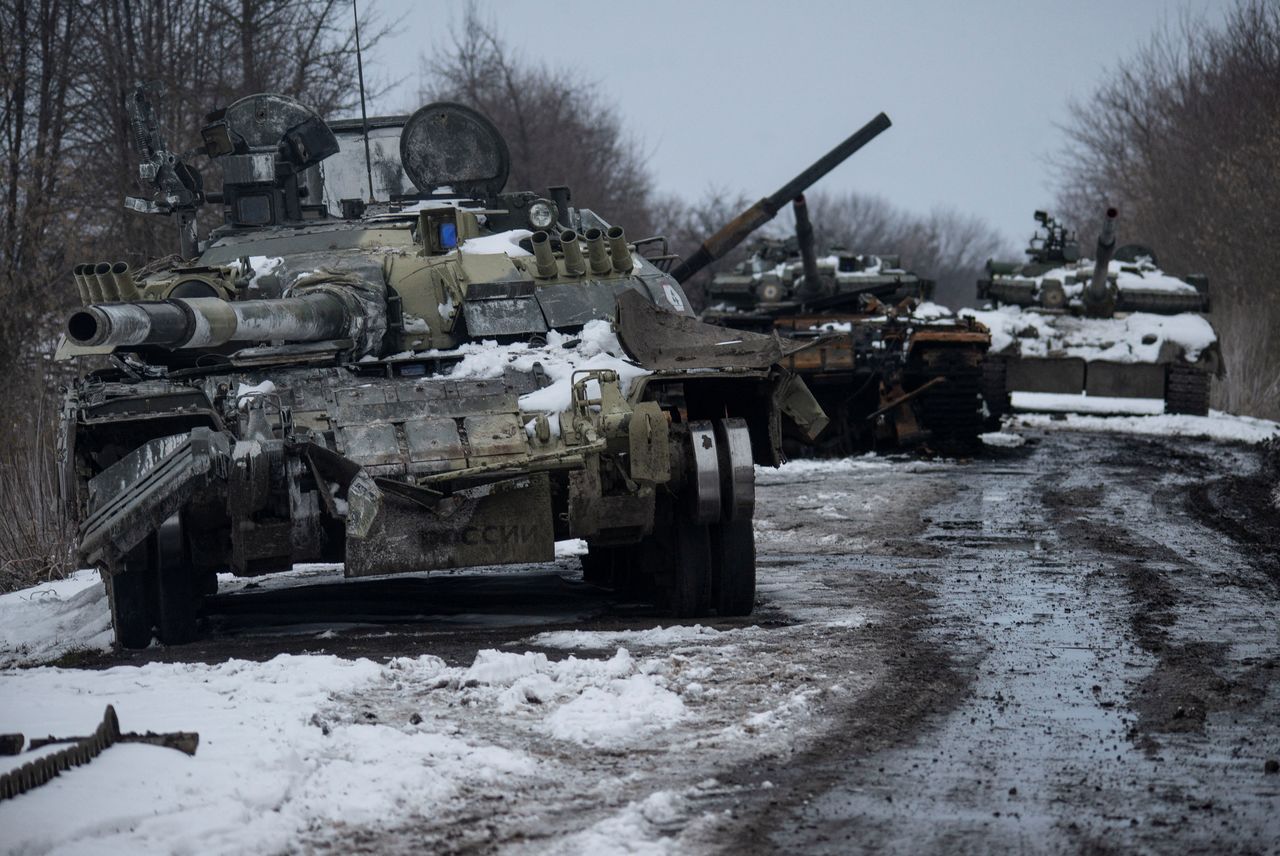 Destroyed Russian tanks are seen, amid Russia's invasion of Ukraine, in the Sumy region, Ukraine, March 7, 2022. Irina Rybakova/Press service of the Ukrainian Ground Forces/Handout via REUTERS 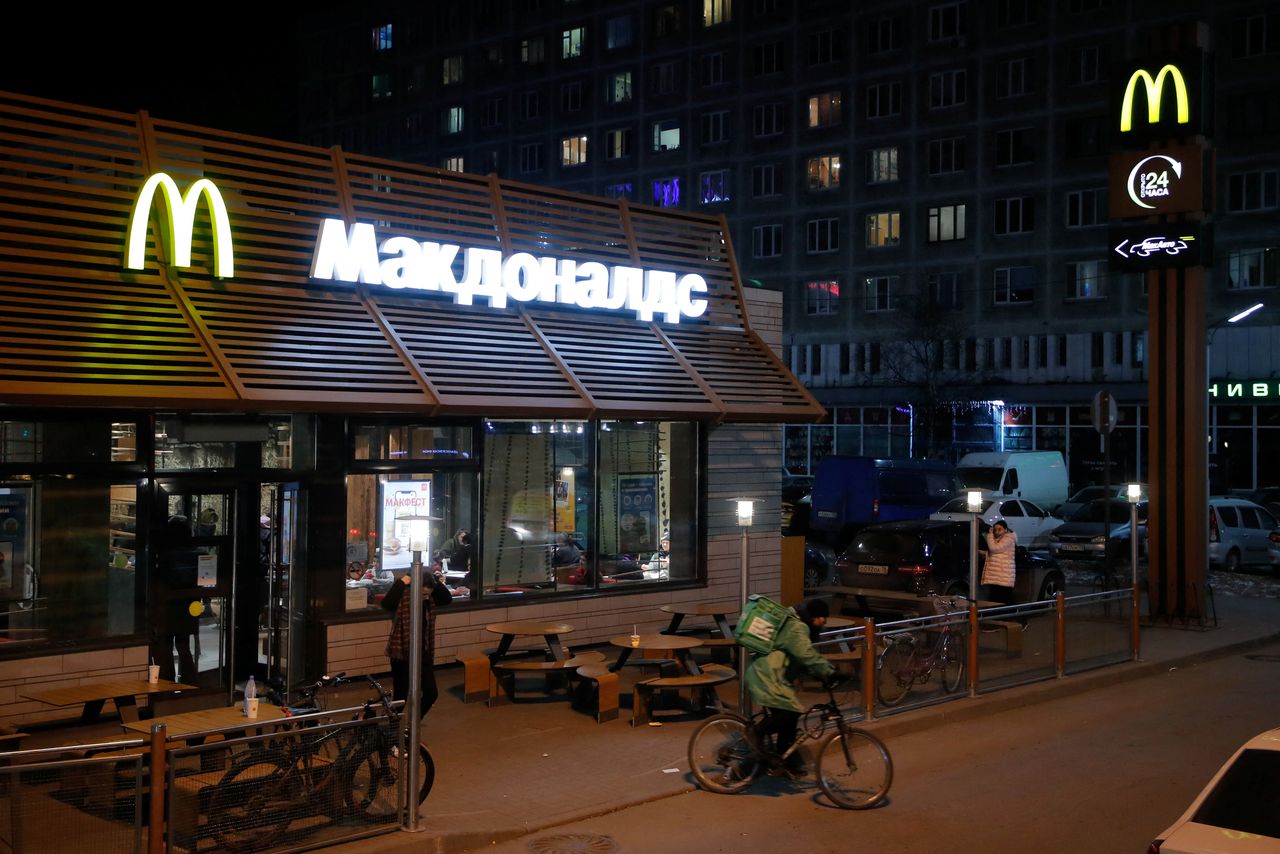 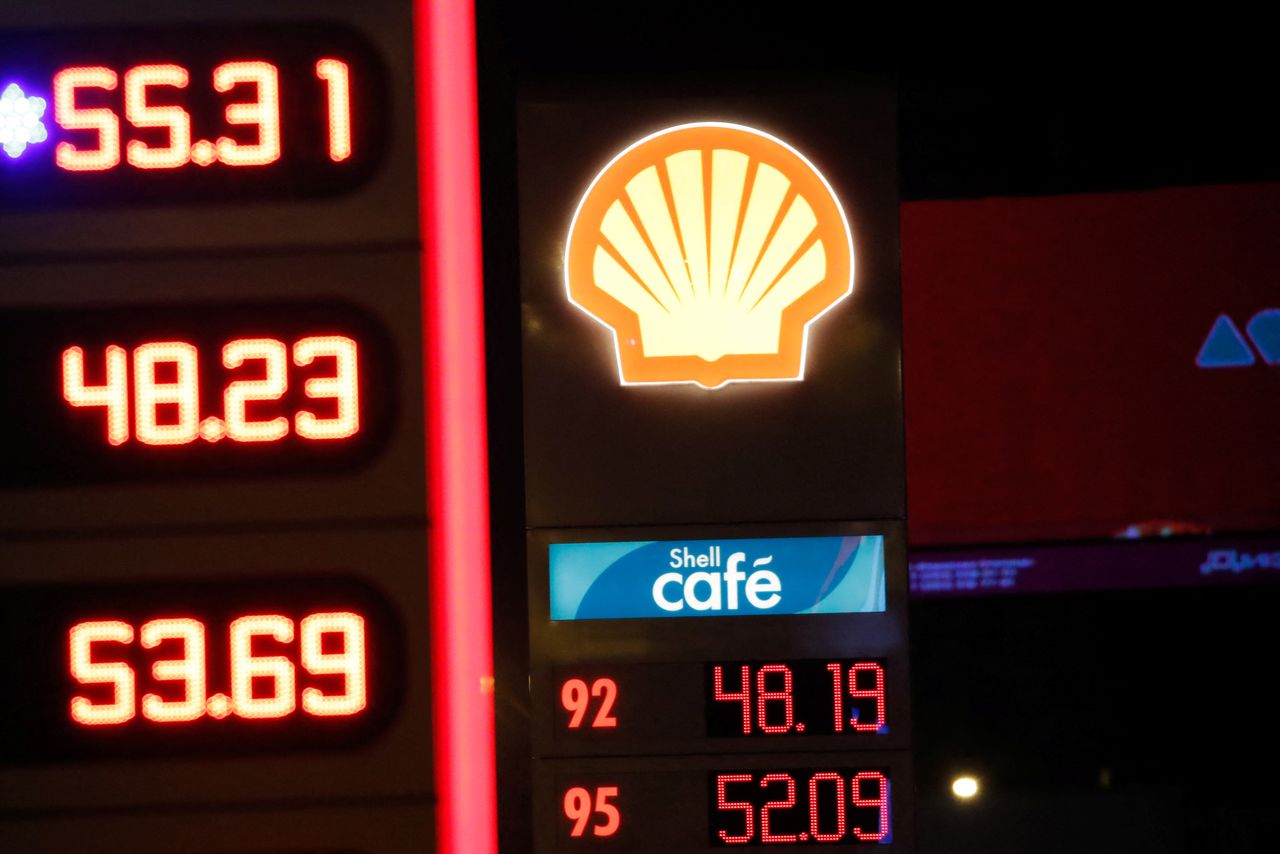 A view shows a board with the logo of Shell at the company's fuel station in Saint Petersburg, Russia March 8, 2022. REUTERS/Anton Vaganov 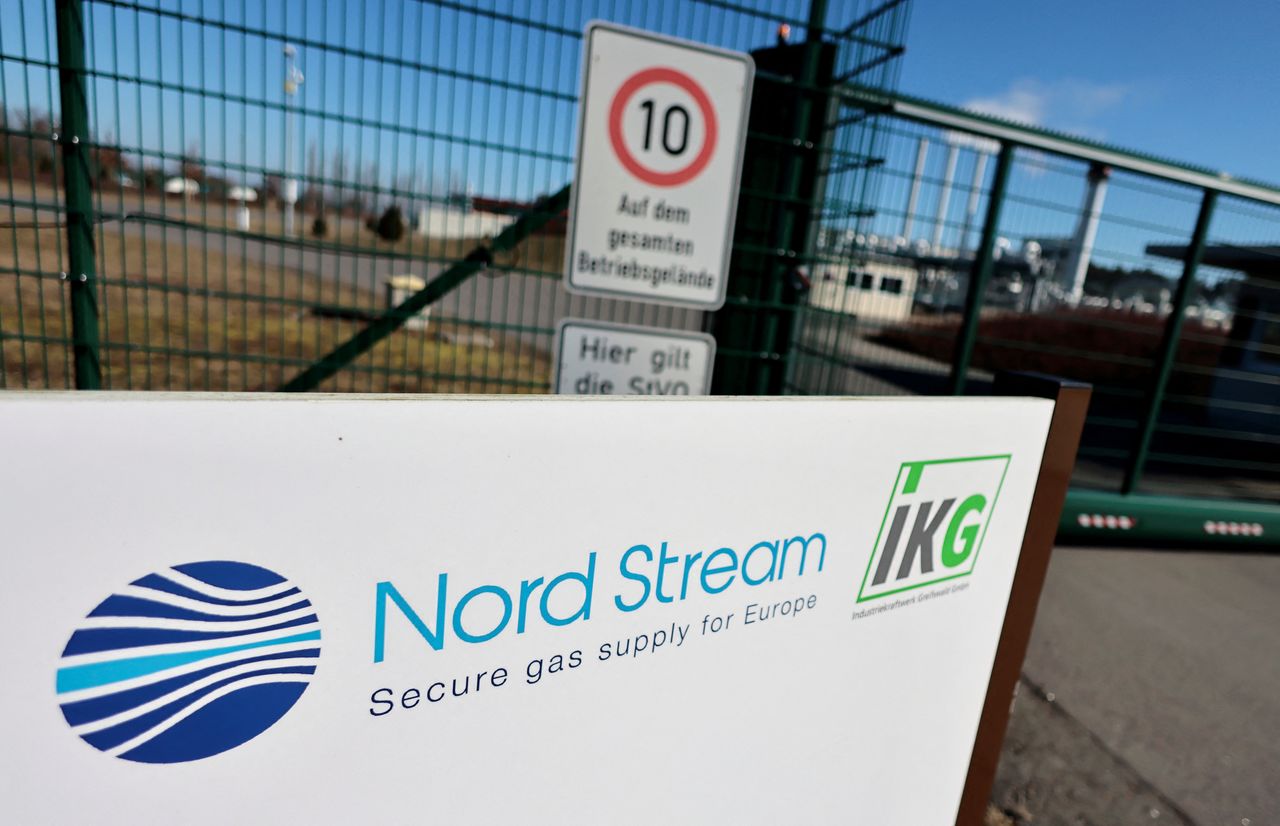 The logo of the landfall facilities of the 'Nord Stream 1' gas pipeline are pictured in Lubmin, Germany, March 8, 2022. REUTERS/Hannibal Hanschke 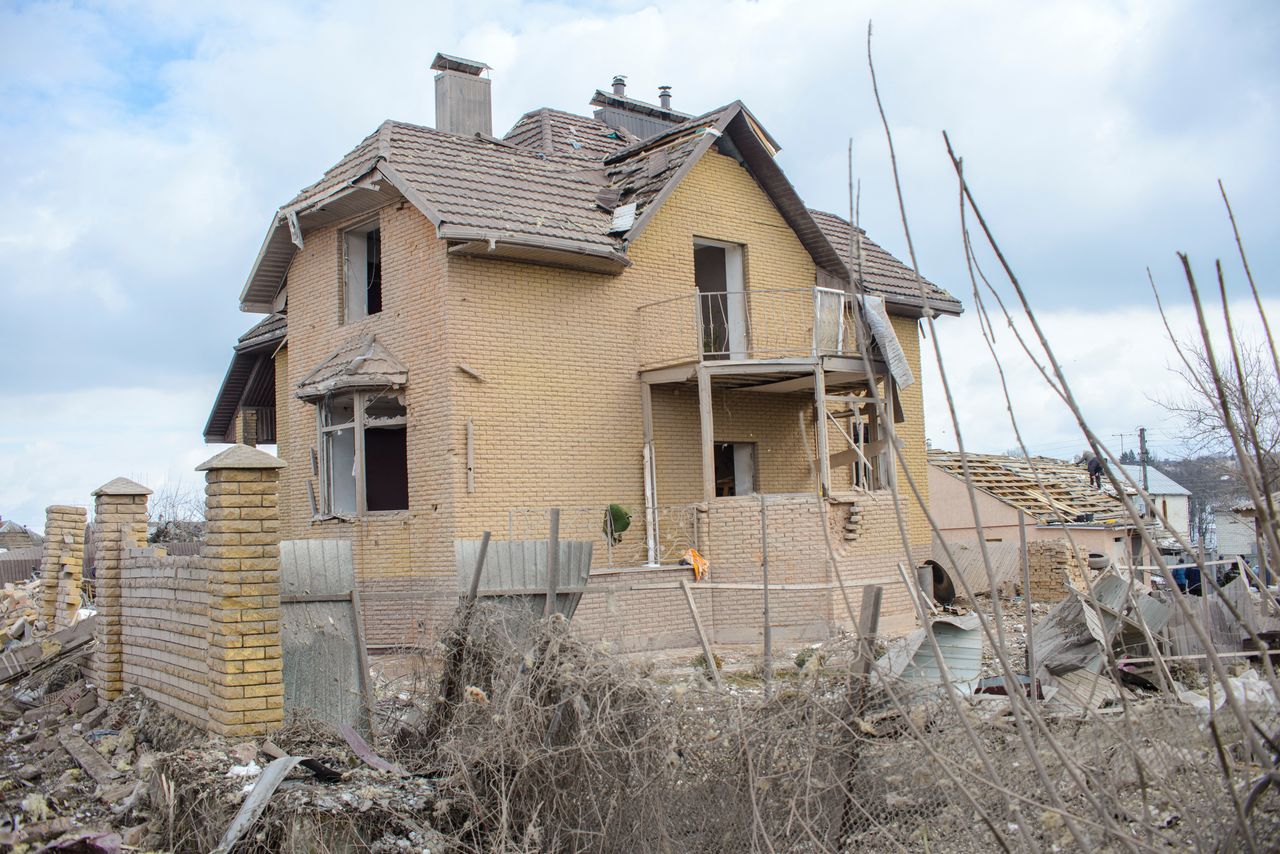 A house damaged by shelling, amid Russia's invasion of Ukraine, is seen in Sumy, Ukraine March 8, 2022 in this picture obtained from social media. Andrey Mozgovoy/via REUTERS 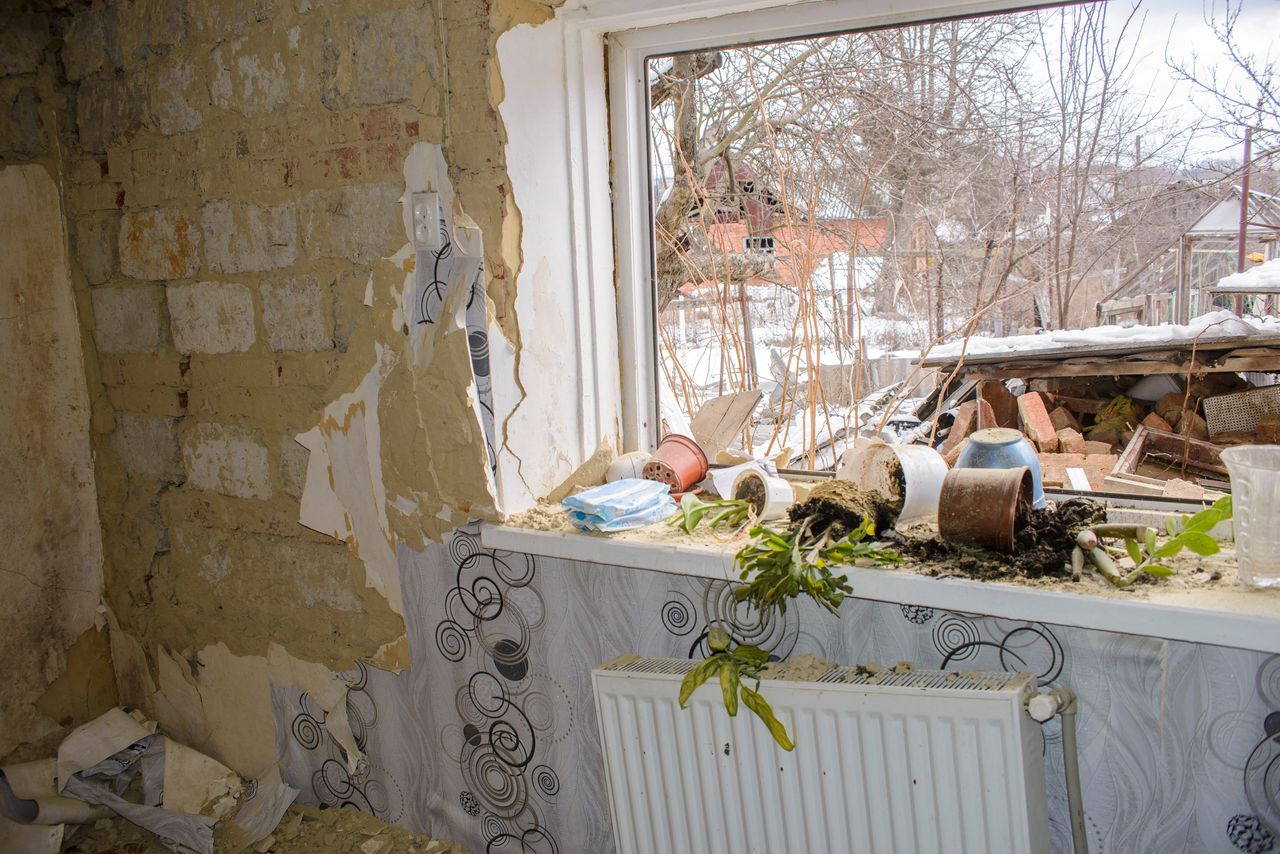 A detail view shows the interior of a house destroyed by shelling, amid Russia's invasion of Ukraine, in Sumy, Ukraine March 8, 2022 in this picture obtained from social media. Andrey Mozgovoy/via REUTERS 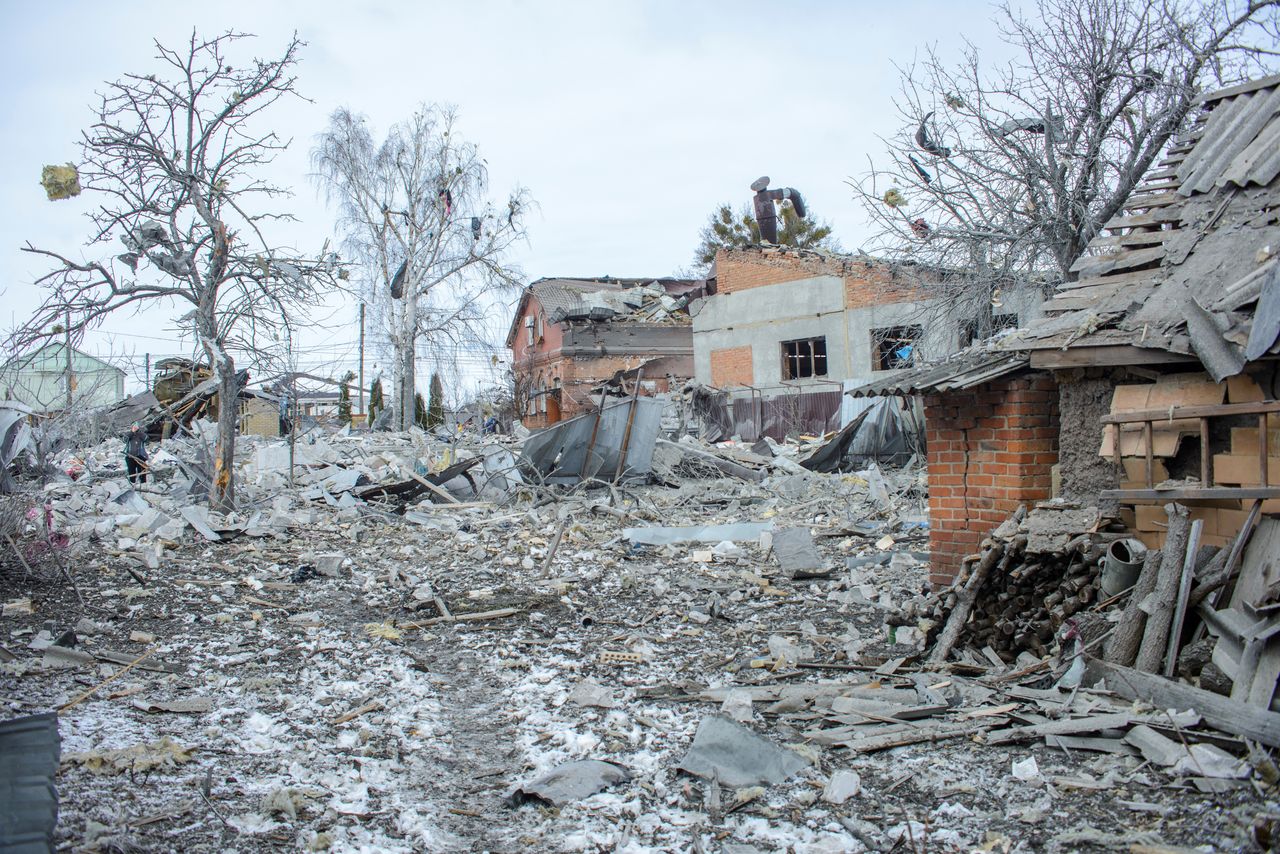 Debris is seen next to houses destroyed by shelling, amid Russia's invasion of Ukraine, in Sumy, Ukraine March 8, 2022 in this picture obtained from social media. Andrey Mozgovoy/via REUTERS 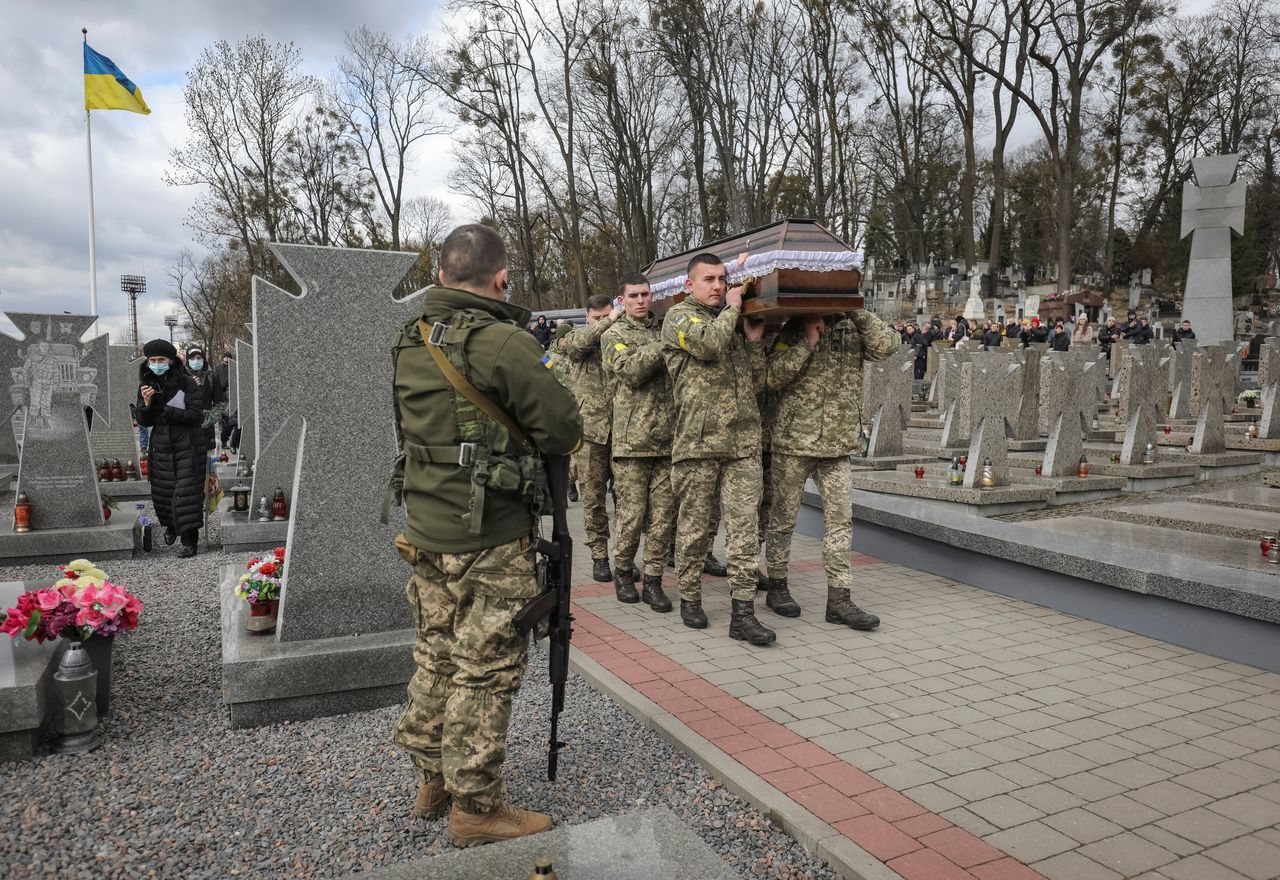 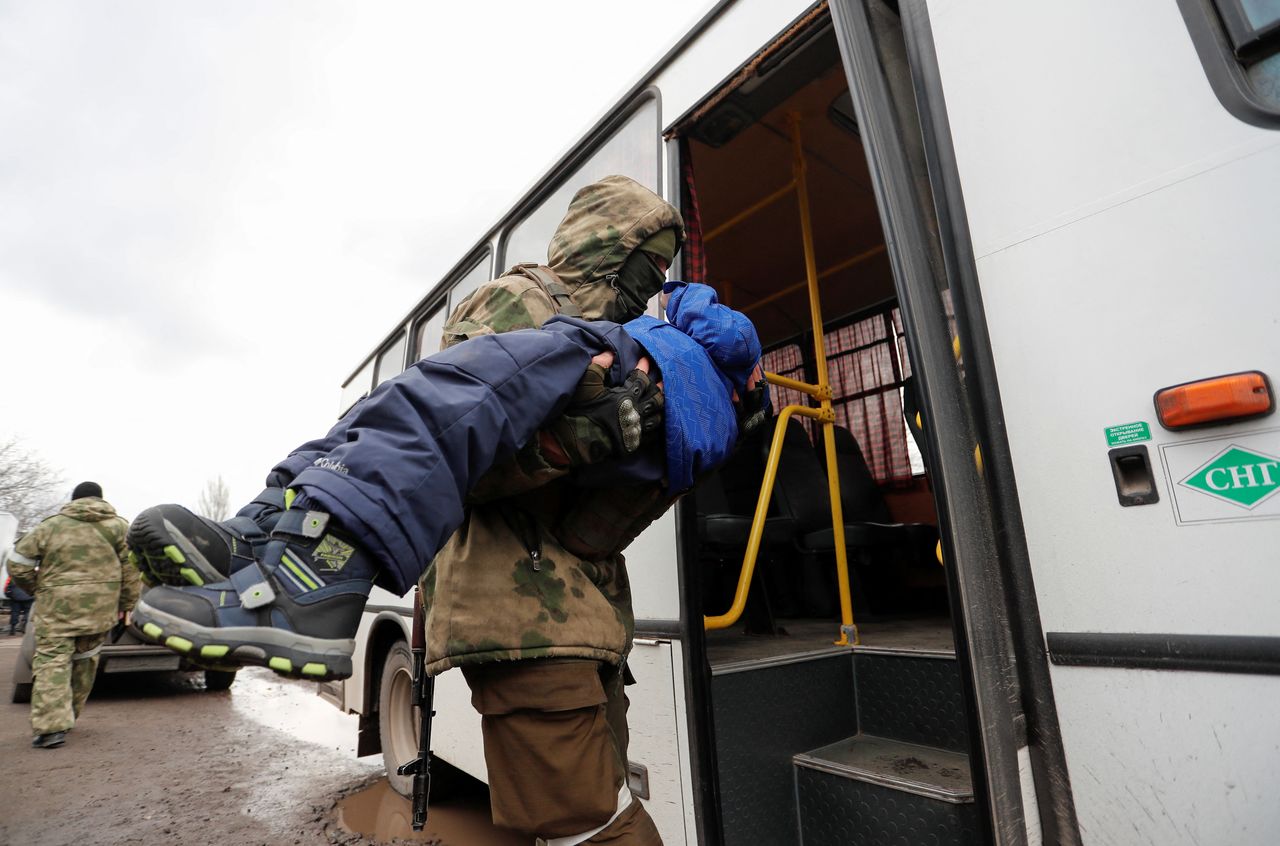 A service member of pro-Russian troops carries a child, who was evacuated from Mariupol area to a refugee camp in the settlement of Bezymennoye, into a bus before the departure for the territory of Russia during Ukraine-Russia conflict in the Donetsk region, Ukraine March 8, 2022. REUTERS/Alexander Ermochenko 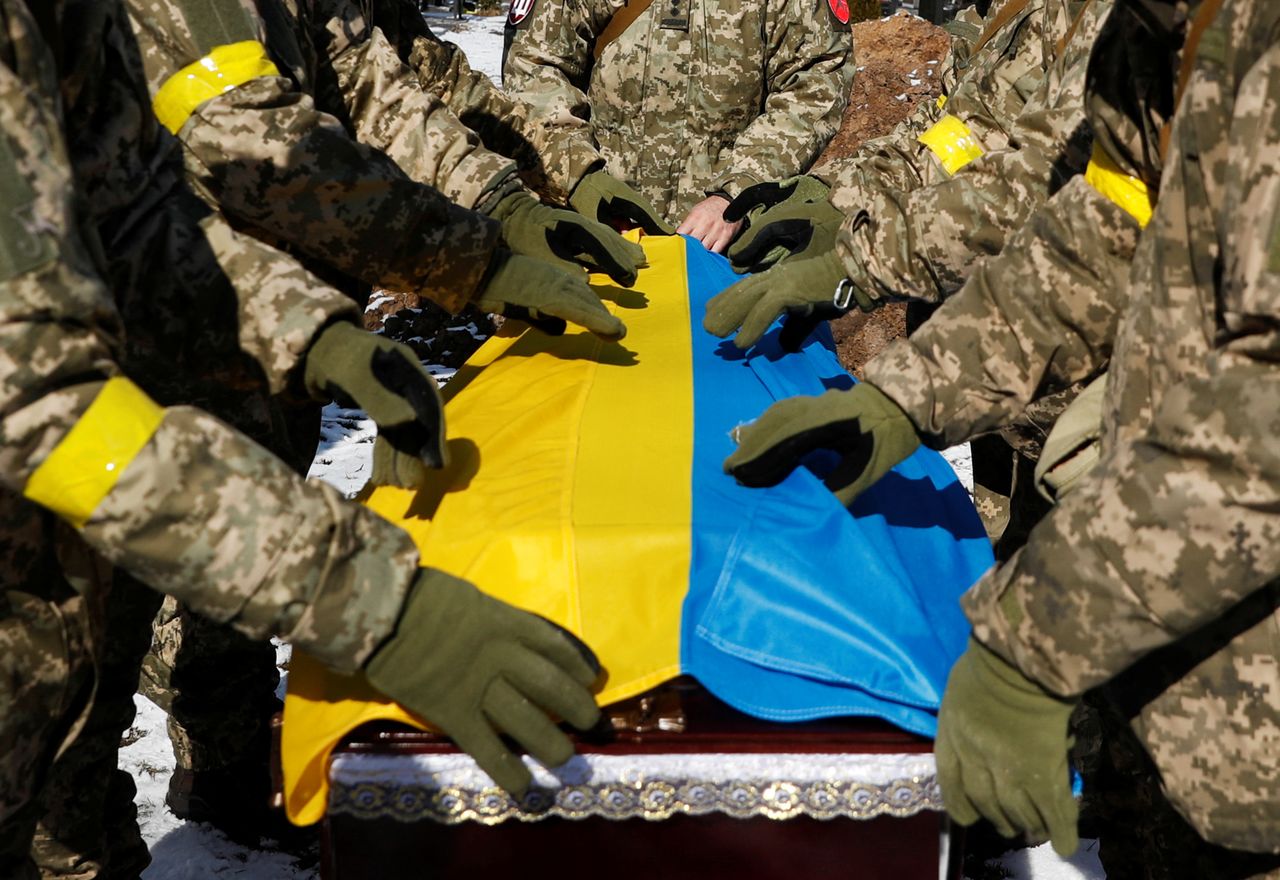 Members of the Honour Guard place the national flag to a coffin with a body of the member of the Ukrainian Armed Forces, Valerii, who was killed during Russia's invasion of Ukraine, during a funeral ceremony in Kyiv, Ukraine, March 8, 2022. REUTERS/Valentyn Ogirenko 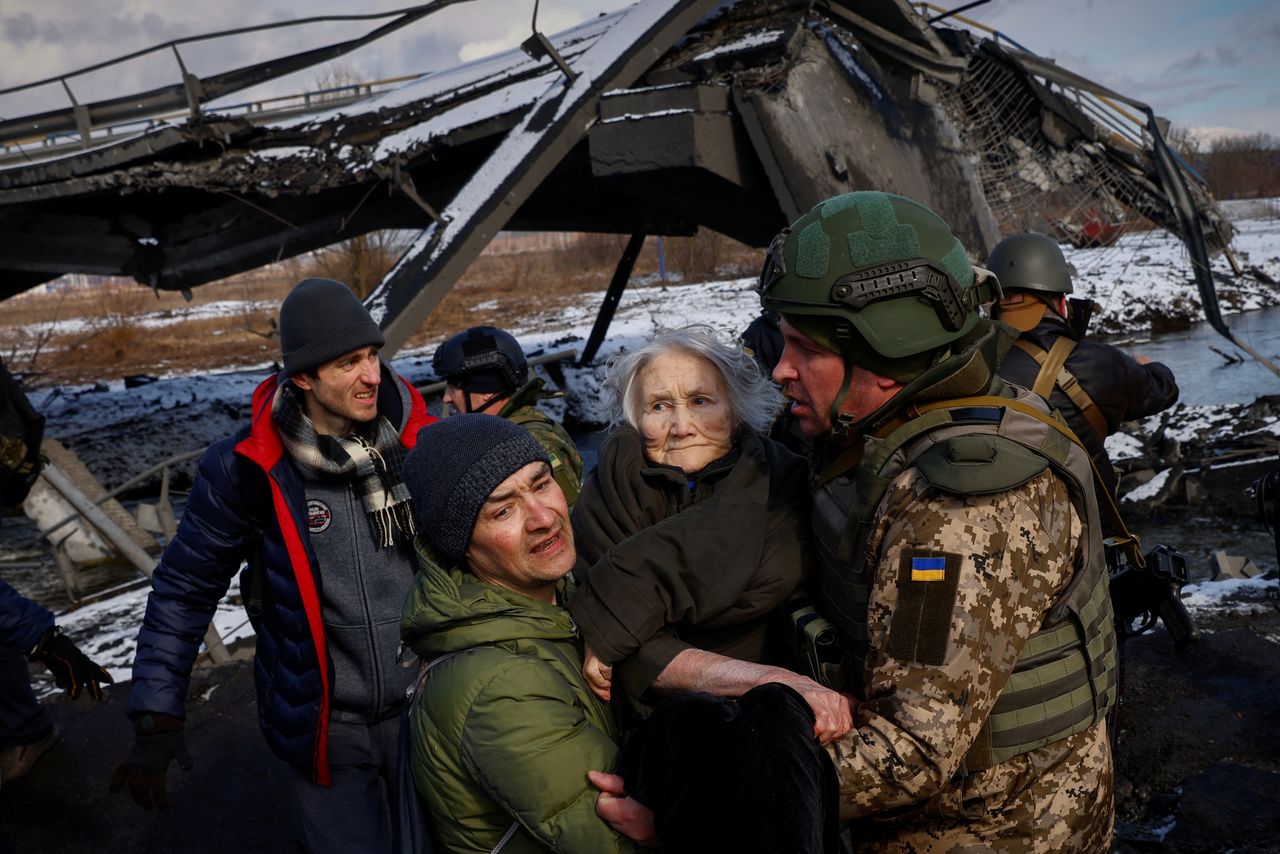 Two men carry a woman as people flee from advancing Russian troops whose attack on Ukraine continues in the town of Irpin outside Kyiv, Ukraine, March 8, 2022. REUTERS/Thomas Peter 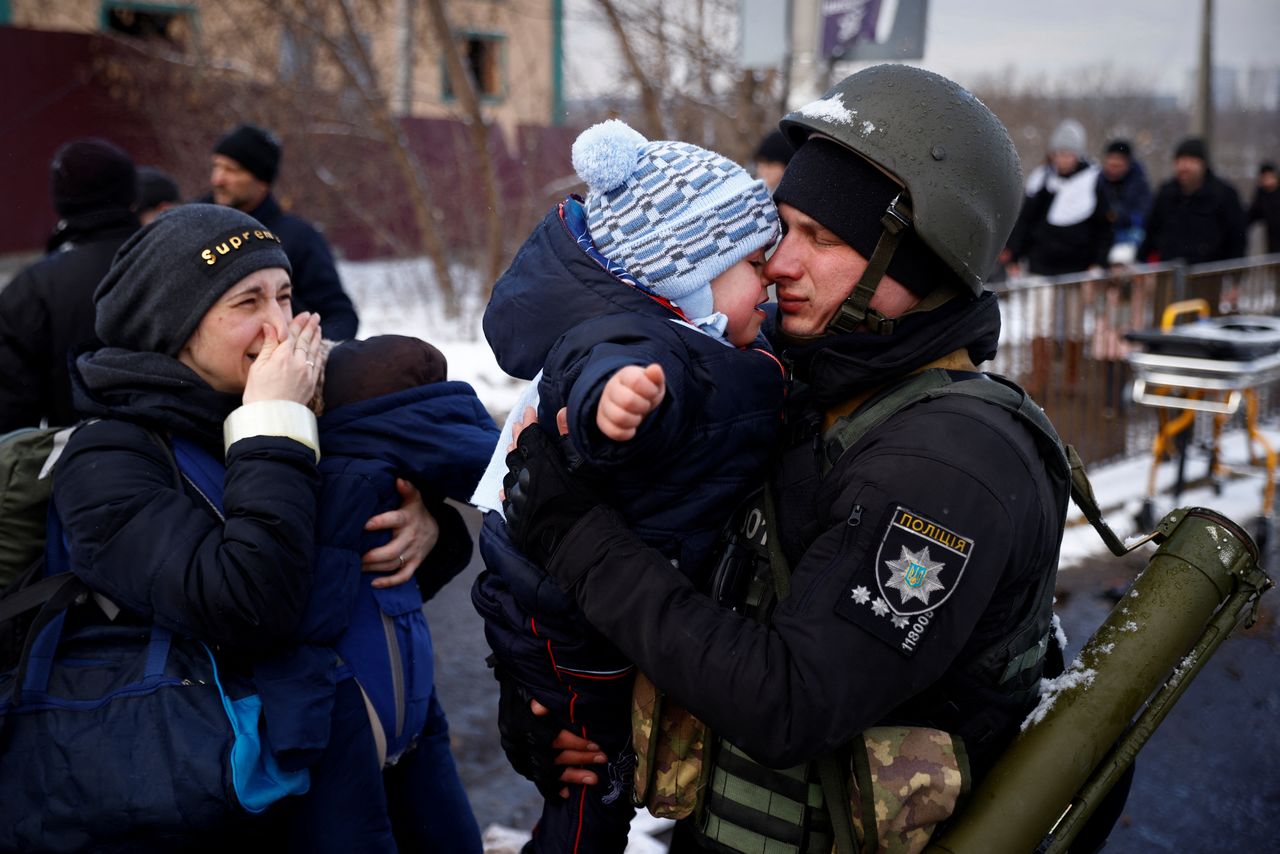 A police officer says goodbye to his son as his family flees from advancing Russian troops as Russia's attack on Ukraine continues in the town of Irpin outside Kyiv, Ukraine, March 8, 2022. REUTERS/Thomas Peter 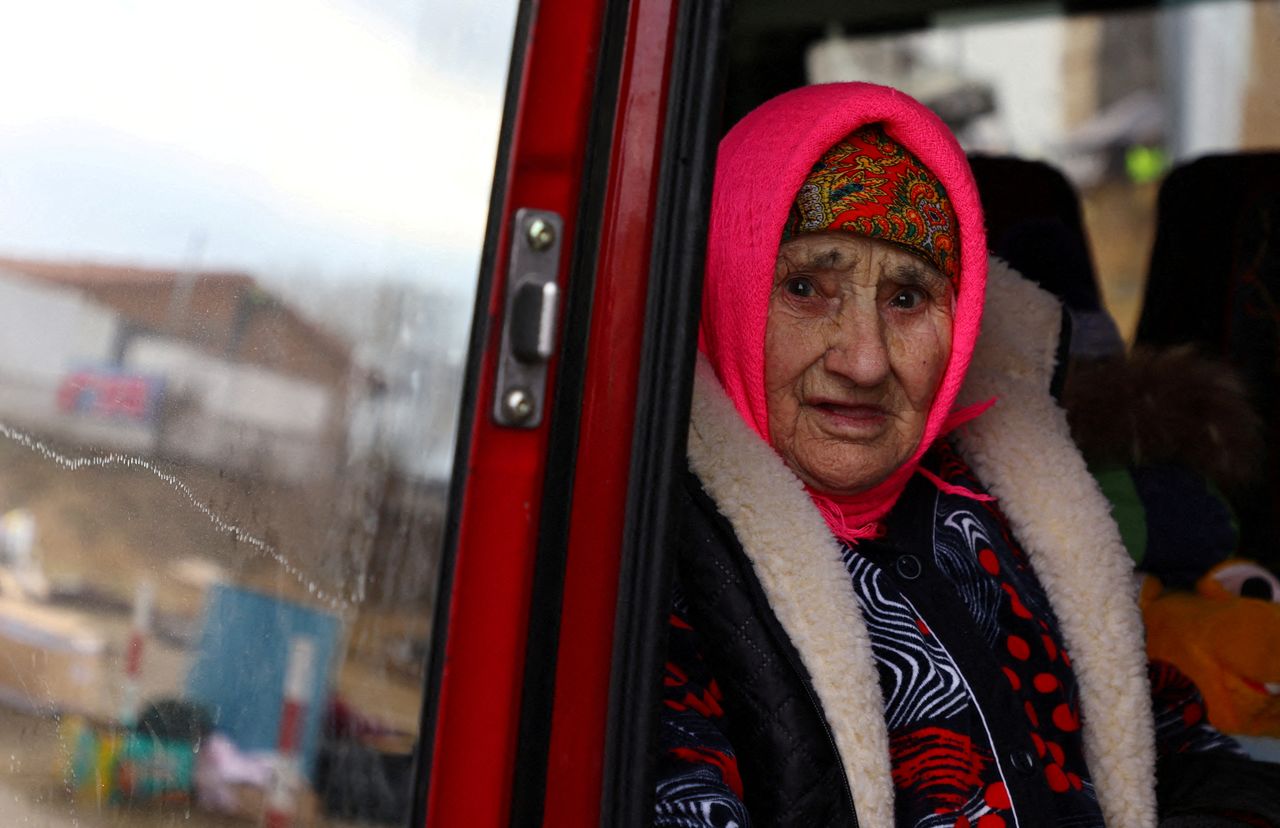 Natasha, 83 years old, who witnessed World War Two, looks out of a shuttle bus after crossing the border from Ukraine to Poland after fleeing from Mykolajiw following the Russian invasion of Ukraine, at the border checkpoint in Medyka, Poland, March 8, 2022. REUTERS/Fabrizio Bensch 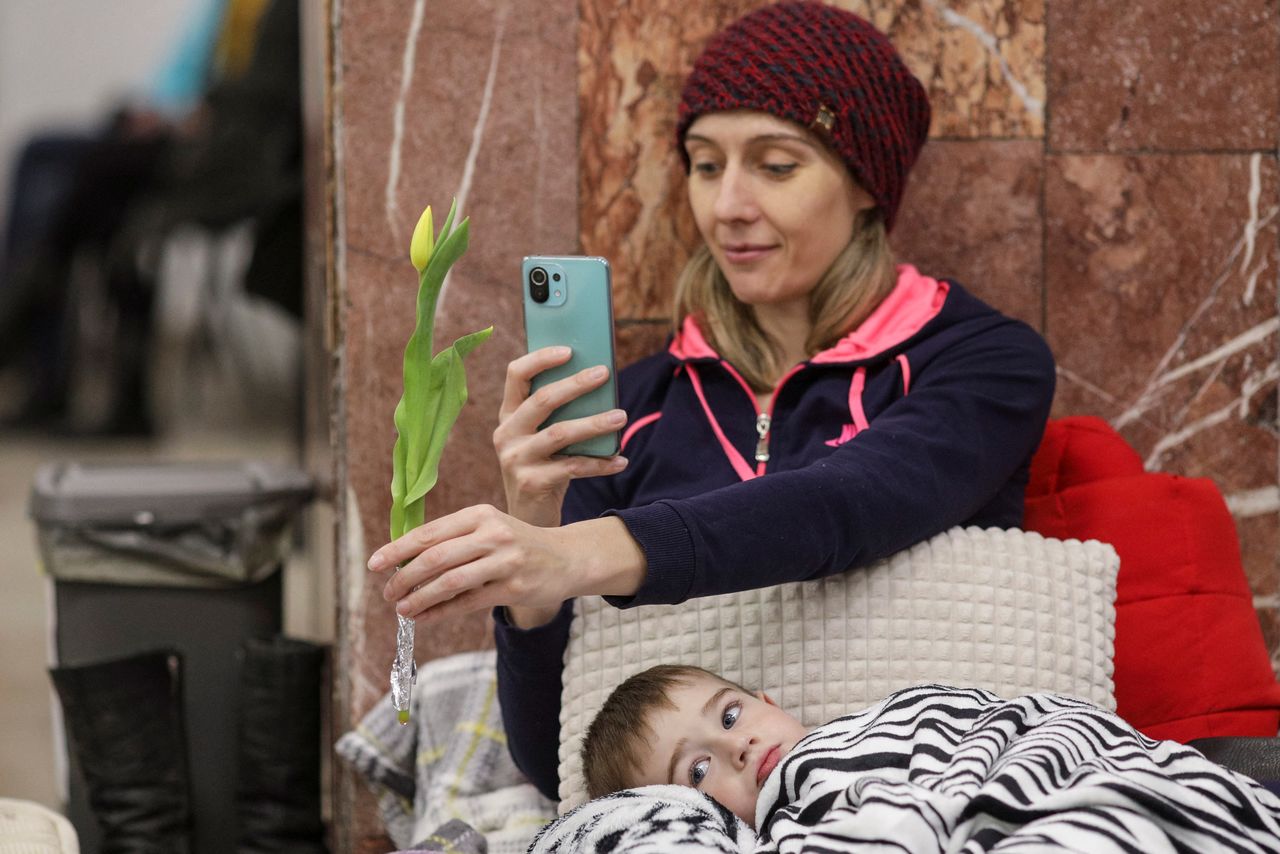 Daniel tries to rest in his mothers lap as she takes a picture of a tulip received from a volunteer, on a mattress laid inside the ticket office at the North Railway Station, after having fled Ukraine following the Russian invasion, in Bucharest, Romania, March 8, 2022. Inquam Photos/Octav Ganeavia REUTERS 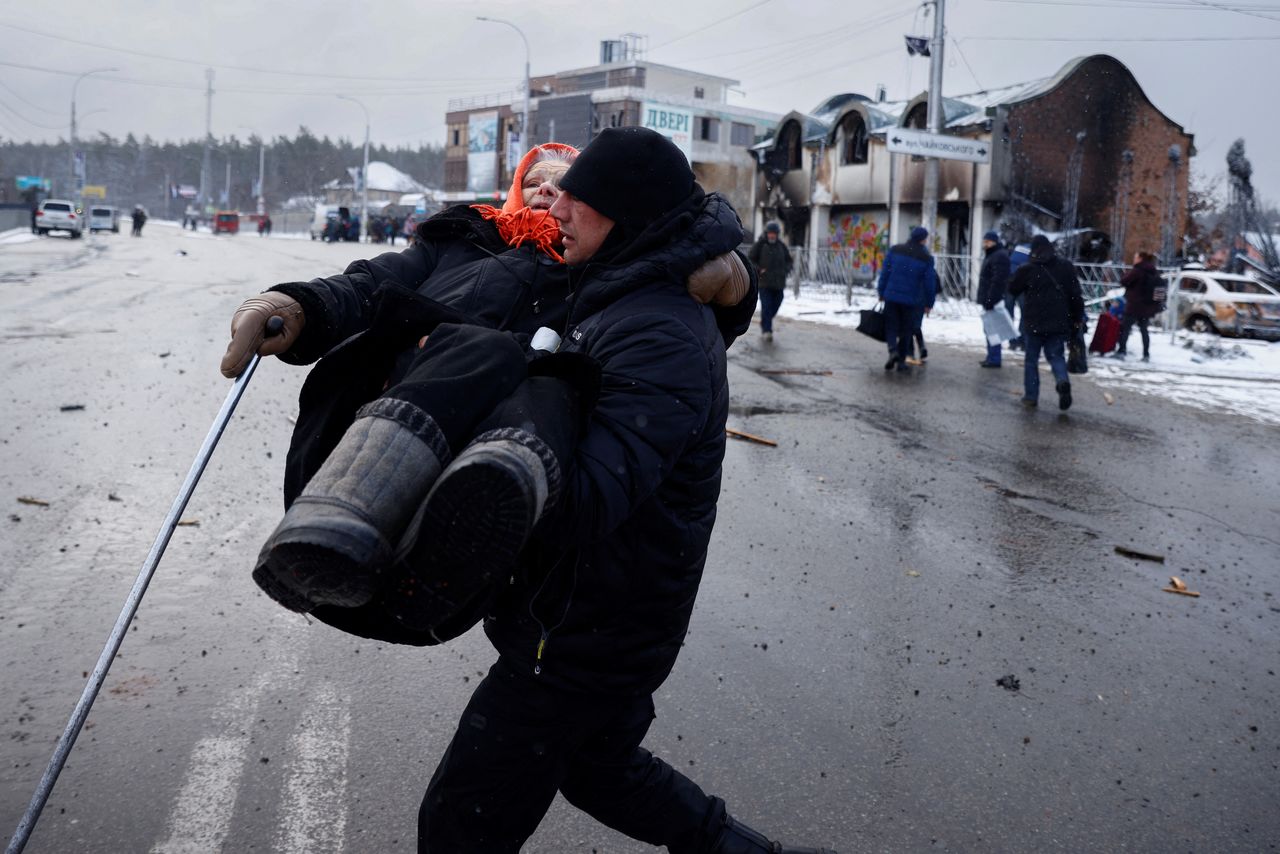 A man carries an old woman as people flee from advancing Russian troops as Russia's attack on Ukraine continues in the town of Irpin outside Kyiv, Ukraine, March 8, 2022. REUTERS/Thomas Peter