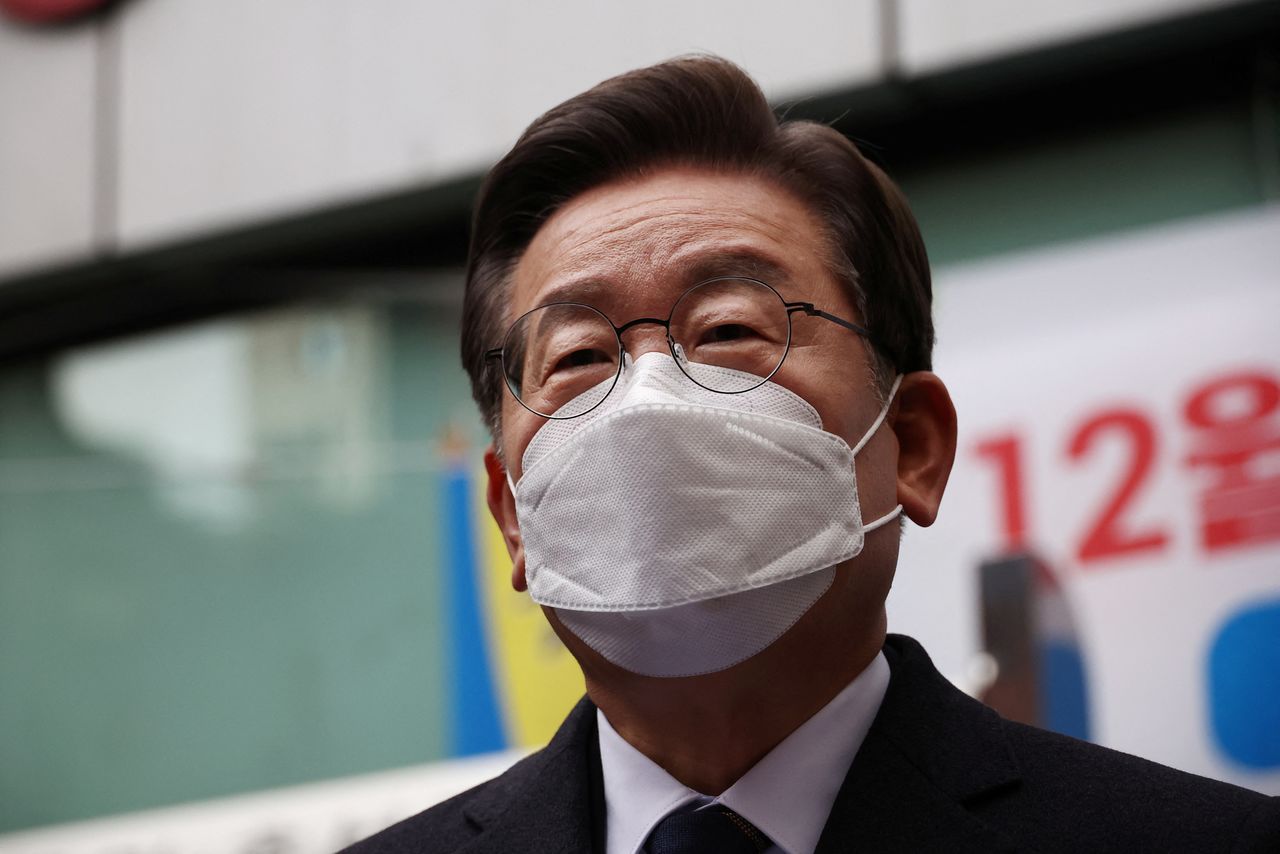 FILE PHOTO: Lee Jae-myung, the presidential candidate of South Korea's ruling Democratic Party, speaks to the media as he leaves after casting his early vote for the upcoming March 9 presidential election at a polling station in Seoul, South Korea, March 4, 2022. REUTERS/Kim Hong-Ji

Here are some of the major policy pledges he made throughout the campaign.

Lee has called for an expansionary fiscal policy and universal basic income of 1 million won ($800) per year to every individual.

He has proposed offering cash handouts to all people in an effort to dampen the blow from COVID-19, with extra support for hard-hit small businesses.

Lee also vowed to issue an executive order to lift anti-pandemic curfews on business, and to freeze public utility charges until the pandemic ends.

Lee initially said he would pay for his universal income plans by levying taxes on carbon emissions and impose a new, nationwide land ownership tax, under which homeowners would pay taxes on the land their homes occupy.

Recently, however, he promised not to raise any taxes and proposed the temporary easing of property-related taxes for multiple home owners, saying he may adjust his universal income agenda.

Lee calls for tougher regulations to crack down on speculative home buying, and said he will introduce the land ownership tax to prevent such transactions.

He has also vowed to supply more than 3 million new homes in the next five years, 30% of which to young generations, at up to half of current market prices.

Lee said he will send special envoys to the United States, China, Japan and North Korea as soon as he is elected in an effort to jumpstart diplomacy and find a pragmatic way to approach the standoff with the North.

His administration will seek a roadmap of conditional sanctions relief and phased simultaneous action by North Korea, with a snapback mechanism under which sanctions would be restored if North Korea fails to follow through on denuclearisation steps.

Lee argues South Korea does not need to choose between its largest trading partner, China, and its only treaty ally, the United States.

He says maintaining a good ties with China does not mean Seoul's decades-long alliance with Washington is weak, but that it has evolved into a more comprehensive partnership.

On Japan, which has a fraught relationship with South Korea since it occupied the peninsula from 1910-1945, Lee says he will continue a "two-track" approach of separating historical and territorial disputes from social and economic cooperation.

Gender issues emerged as a major motivating factor for many young male voters, who complain of reverse discrimination, despite surveys that find widespread misogyny and high wage gaps for women.

Lee has opposed his rival's call for to abolish the gender equality ministry, but said he supports dropping the word "women" from its official Korean-language title.