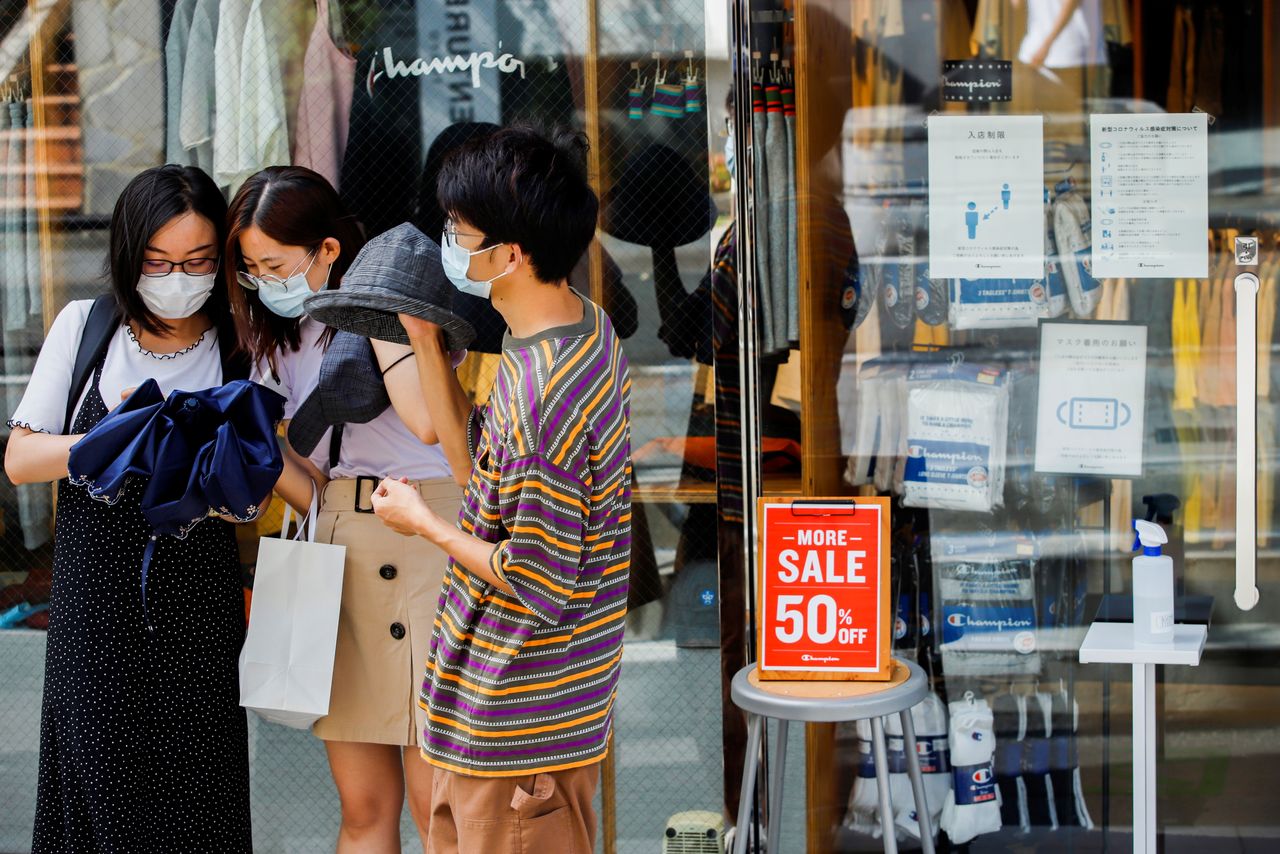 People wearing masks stand outside a shop with infection prevention instructions on it's window in Harajuku shopping area, amid the coronavirus disease (COVID-19) outbreak in Tokyo, Japan August 9, 2021. REUTERS/Androniki Christodoulou

The results add pressure on policymakers to ramp up fiscal stimulus to support Japan's economy, which is likely to have stalled in the current quarter and faces fresh risks from soaring fuel prices blamed on the Ukraine crisis.

"Households may keep their purse strings tight given the surge in energy costs and rising prices of daily necessities."

Household spending rose 6.9% in January from a year earlier, government data showed on Friday, more than a median market forecast for a 3.6% gain. It followed a 0.2% drop in December.

The increase was largely due to the base effect of a slump in January last year, when COVID-19 state of emergency curbs were imposed.

Looser curbs to deal with a spike in new Omicron coronavirus variant cases remain in place in some areas of Japan, weighing on household spending.

A separate government survey showed Japan's business sentiment sank in the first quarter with sectors vulnerable to rising raw material costs, such as food and transportation, taking a hit.

An index gauging big companies' sentiment stood at -7.5% in the current quarter, compared with a reading of +9.6 in the October-December period, the survey showed. It was the first negative reading in three quarters.

Japan's heavy reliance on imports for fuel and commodity makes its economy vulnerable to a rise in raw material costs, which has accelerated in the wake of Russia's invasion of Ukraine in late February.

Wholesale inflation hit a record 9.3% in February and analysts expect core consumer inflation to head near the Bank of Japan's 2% target from April, threatening to choke already weak consumer and business spending.

Some lawmakers are beginning to call for another spending package to cushion the blow from rising energy costs, with one opposition party executive proposing a package sized around 10 trillion yen ($86 billion).

Finance Minister Shunichi Suzuki said on Friday the government was not considering compiling a fresh stimulus package as it focuses on passing the fiscal 2022 budget through parliament.

Japan's economic growth likely ground to a near halt or may have contracted in January-March, a Reuters poll showed, as COVID-19 curbs and supply chain disruptions hurt consumption and factory output.