Explainer-Is it legal for foreigners to fight for Ukraine?

(Reuters) - As thousands of would-be fighters from outside the country volunteer to help Ukraine defend itself against Russia's invasion, some may also face legal consequences in their home countries.

Citizens of Canada, Georgia, India, Japan, the United Kingdom and the United States are among the volunteers, Reuters and other media organizations have reported.

Below is a summary of some of the laws governing foreigners who have signed up for Ukraine's "international legion."

IS IT LEGAL FOR AMERICANS TO VOLUNTEER?

U.S. citizens are not barred from serving in another country's military, the State Department's website says. Serving as an officer or fighting against a country that is at peace with the United States can be grounds for giving up citizenship voluntarily, but Supreme Court precedent says foreign military service alone cannot be used to strip Americans of citizenship.

A separate U.S. law dating back to 1794, the Neutrality Act, prohibits citizens from making war against foreign governments at peace with Washington and carries a prison sentence of up to three years. The law, which could technically apply to volunteer military action against Russia, was used to prosecute Americans involved in an attempted coup in Gambia in 2014. But otherwise it has been rarely enforced in modern history, according to David Malet, a professor at American University in Washington, D.C.

"Absent links to domestic terrorism, it’s hard for me to imagine Americans being prosecuted for going to Ukraine," Malet said.

WHAT ABOUT AUSTRALIAN, BRITISH AND INDIAN VOLUNTEERS?

Britons traveling to Ukraine to fight could be subject to prosecution upon return, according to a UK Foreign Office travel advisory https://www.gov.uk/foreign-travel-advice/ukraine/safety-and-security last updated Wednesday. Asked by Reuters what charges would apply to UK volunteers, a spokesperson for the British Foreign Office declined to comment.

The United Kingdom's Foreign Enlistment Act, last updated in 1870, blocks citizens from joining foreign militaries fighting countries at peace with Britain, but it has not been applied to modern conflicts. The UK Foreign Secretary initially voiced support for citizen volunteers to fight in Ukraine, but later warned against any travel there.

Australian prime minister Scott Morrison has urged his country’s citizens not to join the military fight in Ukraine, telling reporters last month that there are "uncertainties" about the legal position of foreign civilian combatants.

The Indian Ministry of Home Affairs did not respond to a request for comment about the legality of Indian citizens joining the Ukraine forces. In a case involving Indians traveling to Iraq in 2015, the ministry told the Delhi High Court that allowing Indians to participate in another country's conflict "would lead to the allegation that the Indian government is promoting terrorism in other countries."

HAVE ANY COUNTRIES GIVEN THE ALL-CLEAR?

Germany has said it will not prosecute volunteers who join the fighting, and Danish and Latvian leaders said they would allow their citizens to volunteer. Canadian defense minister Anita Anand has said whether Canadians volunteer is "an individual decision."

WHAT IF FOREIGN FIGHTERS ARE CAPTURED IN UKRAINE?

International law requires Russian forces to treat foreign fighters as prisoners of war, regardless of their nationality, said Daphné Richemond-Barak, a professor with the Lauder School of Government, Diplomacy and Strategy in Israel. That means Russian soldiers must give volunteers who are captured food, water and medical treatment.

However, a Russian Defense Ministry spokesman last week said Western "mercenaries" fighting for Ukraine would not be treated as lawful combatants and would face criminal prosecution or worse, according to Russian news agency TASS.

COULD VOLUNTEERS BE PROSECUTED FOR WARTIME CONDUCT?

Because volunteers will be fighting as members of the Ukrainian army, they are unlikely to face charges in their home country over their specific actions in the war, with the exception of prosecution for war crimes or similar conduct, experts say. 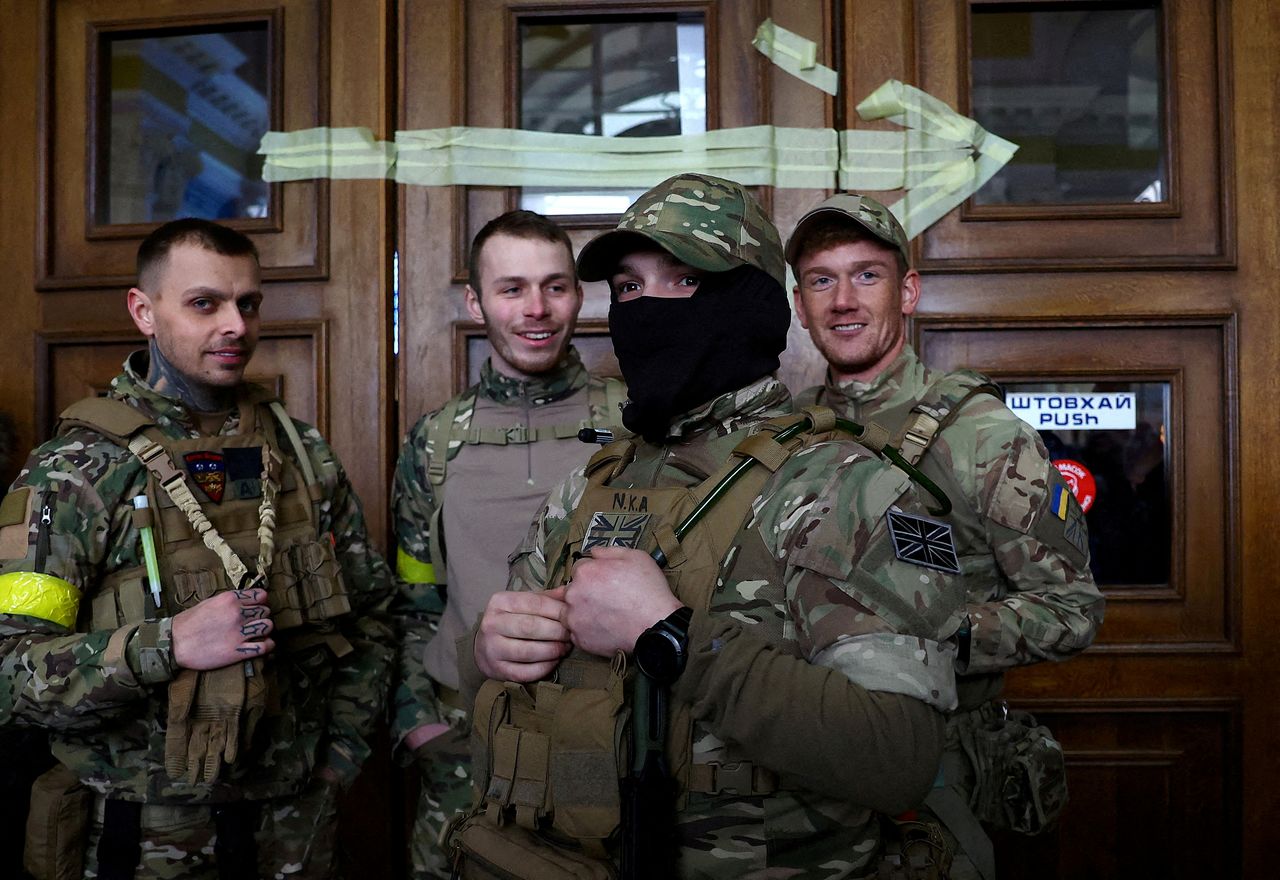 FILE PHOTO: Four foreign fighters from the UK pose for a picture prior to their departure towards the front line in the east of Ukraine following the Russian invasion, at the main train station in Lviv, Ukraine, March 5, 2022. Picture taken March 5, 2022. REUTERS/Kai Pfaffenbach/File Photo 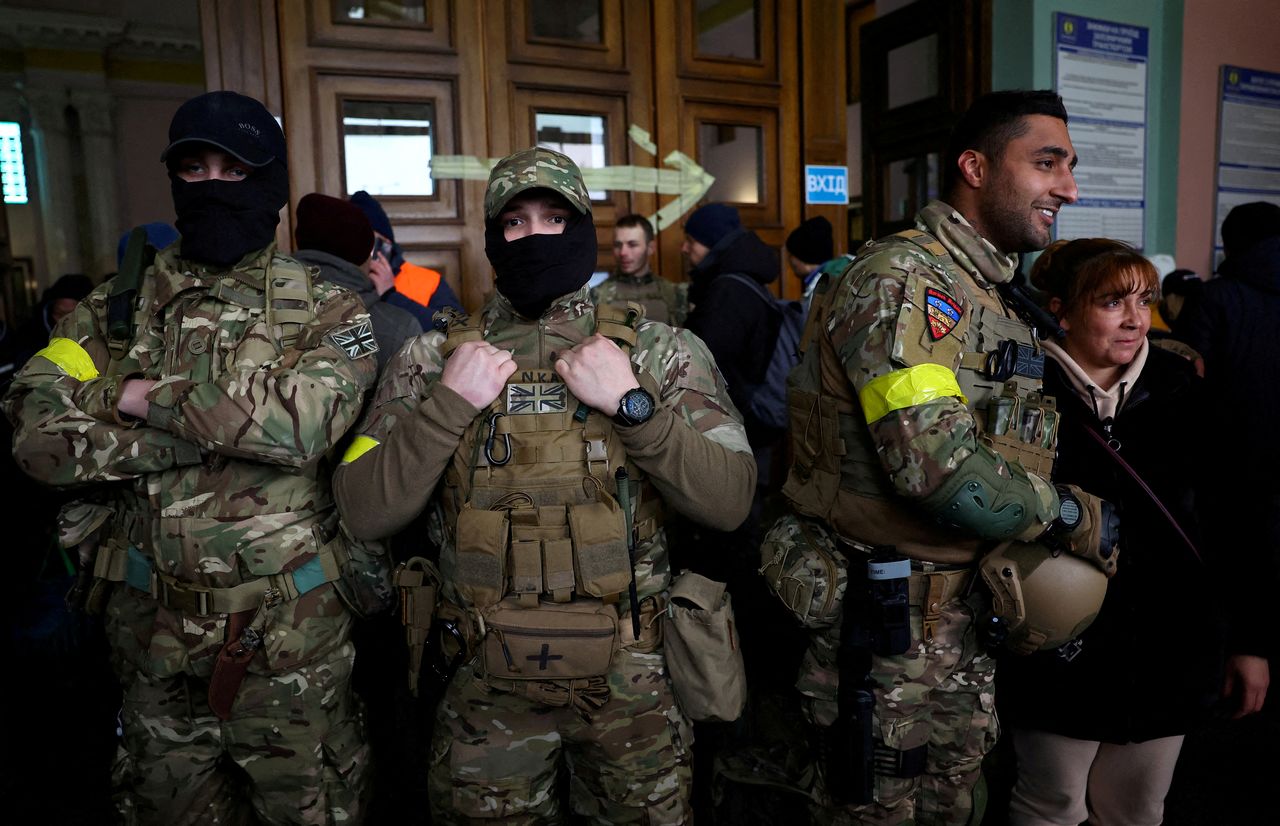 FILE PHOTO: Ben Grant and other foreign fighters from the UK pose for a picture as they are ready to depart towards the front line in the east of Ukraine following the Russian invasion, at the main train station in Lviv, Ukraine, March 5, 2022. REUTERS/Kai Pfaffenbach/File Photo 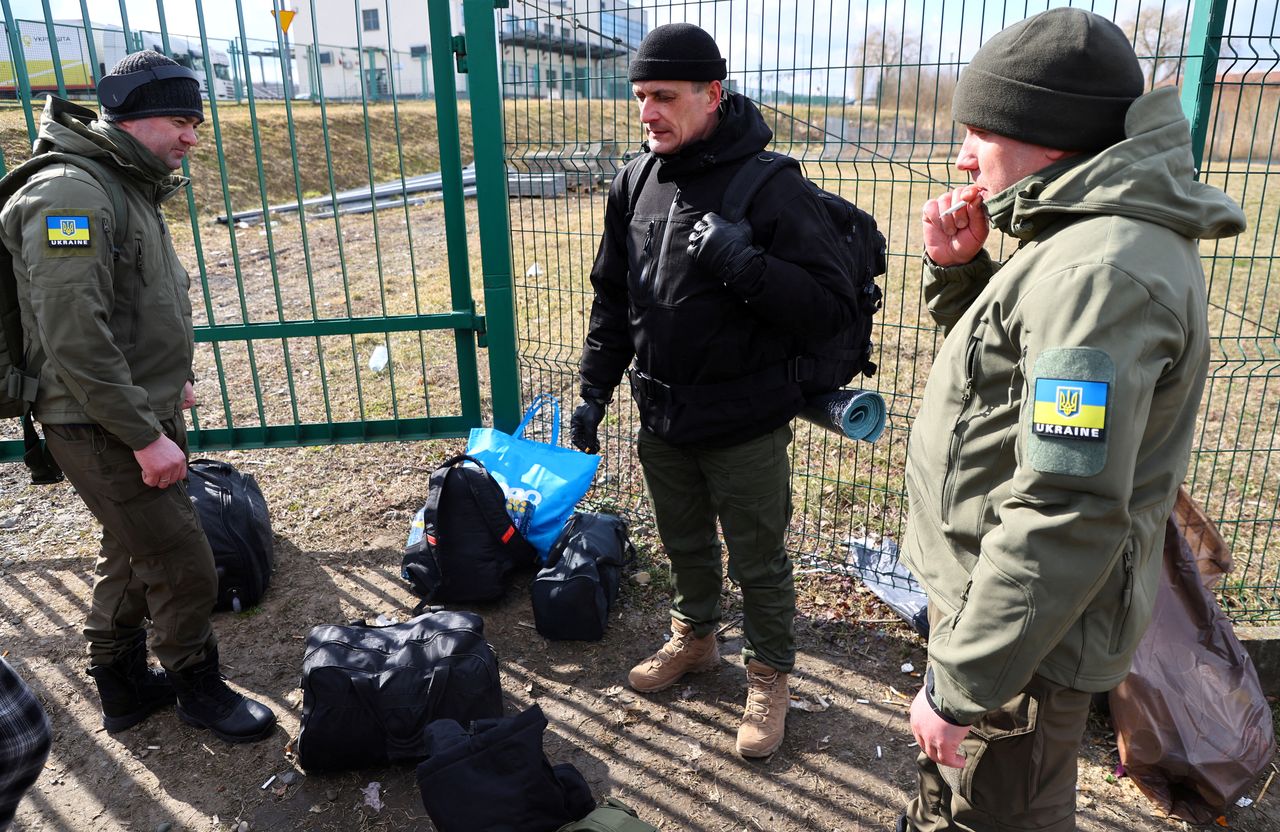 FILE PHOTO: Estonian citizens from Tallinn gather before crossing the border from Poland to Ukraine to join as foreign fighters at the front line in Ukraine following Russia's invasion, at the border checkpoint in Medyka, Poland, March 10, 2022. REUTERS/Fabrizio Bensch/File Photo