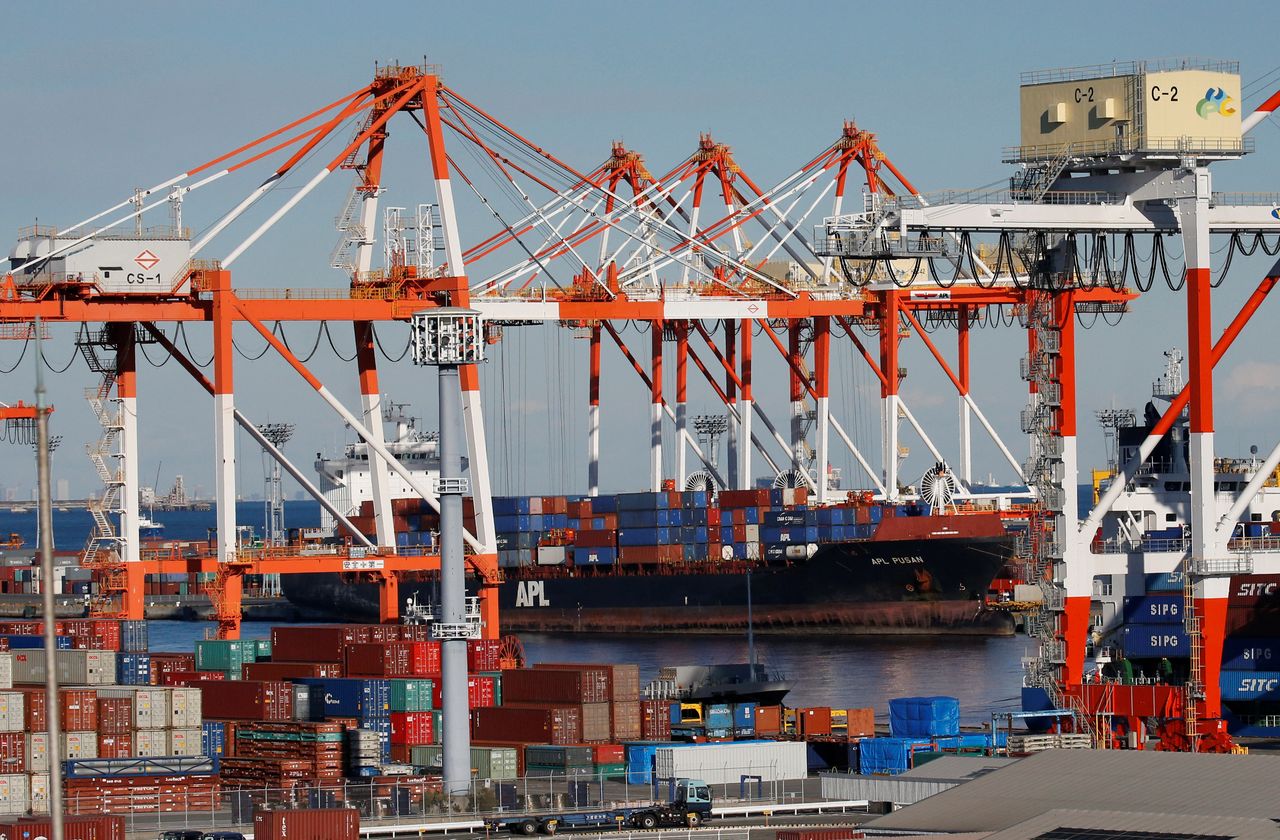 Containers are seen at an industrial port in Yokohama, Japan, January 16, 2017. REUTERS/Kim Kyung-Hoon

TOKYO (Reuters) -Japan reported a wider-than-expected trade deficit in February as an energy-driven surge in import costs caused by massive supply constraints added to vulnerabilities for the world's third-largest economy.

Exports rose slightly less than expected despite a rebound in China-bound shipments, in a worrying sign for an economy facing growing uncertainty from supply challenges and Russia's invasion of Ukraine.

"Although car exports picked up in February, they aren't in a situation of growing steadily due to supply disruptions and a chip shortage, while imports are swelling as oil and raw material prices soar."

Imports surged 34.0% in the year to February, Ministry of Finance data showed on Wednesday, above a median market forecast for a 28.0% gain in a Reuters poll.

That outstripped a 19.1% year-on-year rise in exports in February, resulting in a 668.3 billion yen ($5.65 billion) trade deficit, which was bigger than the 112.6 billion yen shortfall expected in a Reuters poll.

February's deficit was, however, narrower than January's 2.19 trillion yen gap, which was the biggest in a single month in eight years.

"Exports fell again in February, though they should rebound over the coming months provided the recent Omicron outbreak in China doesn't cause major supply chain disruptions to resurface," said Tom Learmouth, Japan economist at Capital Economics.

"Adding in the merchandise trade data for February, net trade could knock off as much as 1.0 percentage point from GDP (gross domestic product) growth this quarter as exports tread water but imports rise strongly."

By region, exports to China, Japan's largest trading partner, expanded 25.8% in the 12 months to February on stronger semiconductor machinery shipments to the country, after posting a Lunar New Year-linked contraction in the prior month.

Exports to the United States, the world's largest economy, grew 16.0% from the previous year in February, on stronger shipments of cars and semiconductor machinery.

The two biggest items contributing to the rise in imports were oil, including from United Arab Emirates, and liquefied natural gas, such as from Australia, the data showed.

The Reuters Tankan poll for March showed Japanese manufacturers feared a fresh surge in energy prices due to the Ukraine crisis, even as they reported the first improvement in their business confidence in three months.

Japan's economy rebounded less than initially estimated in the final quarter of 2021, the government said last week, on weaker growth in consumer and business spending.

The downgrade in fourth quarter growth was bad news for policymakers tasked with sustaining a fragile recovery as the Ukraine crisis clouds the outlook for the global economy.

Norinchukin's Minami said that worsening conditions due in part to rising raw material prices could end up squeezing Japanese manufacturers' profits and may lead to economic growth forecasts being lowered for fiscal 2022, which starts in April.

Many expectations are still for 2.0%-3.0% growth in the coming fiscal year, he added.