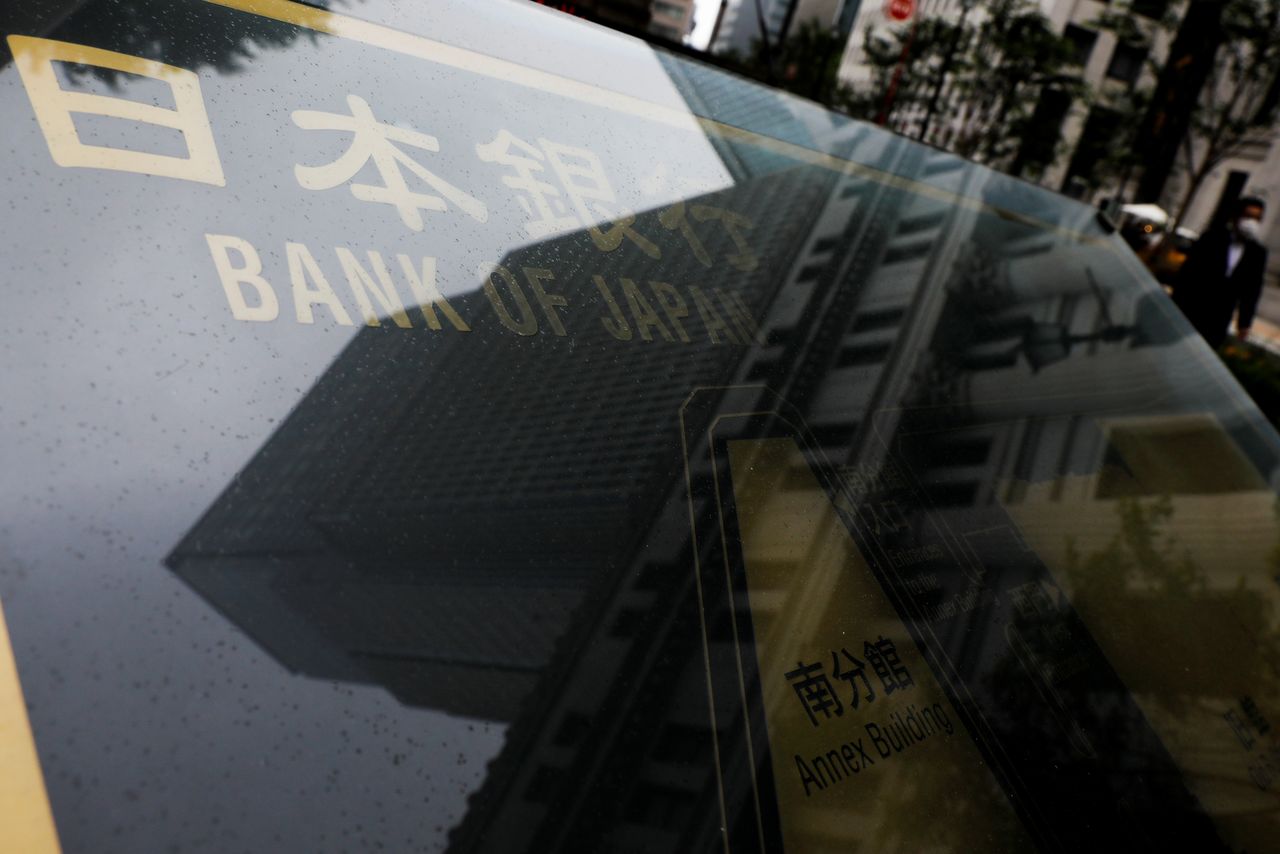 A view of signage outside the headquarters of Bank of Japan amid the coronavirus disease (COVID-19) outbreak in Tokyo, Japan, May 22, 2020.REUTERS/Kim Kyung-Hoon

TOKYO (Reuters) - The Bank of Japan maintained its massive stimulus on Friday and warned of heightening risks to a fragile economic recovery from the Ukraine crisis, reinforcing expectations it will remain an outlier in the global shift towards tighter monetary policy.

Rising fuel and commodity prices blamed on the war in Ukraine could drive up consumer inflation to the BOJ's 2% target in coming months, Governor Haruhiko Kuroda said.

But such cost-push inflation will be short-lived and won't prompt the BOJ to withdraw stimulus, he added, stressing the bank's resolve to maintain huge monetary support for an economy yet to fully recover from the COVID-19 pandemic's wounds.

"There's a chance Japan will see inflation move around 2% from April onward. But most of that is due to rising commodity prices, so there's no reason to tighten monetary policy. Doing so would be inappropriate," he told a news conference.

The BOJ's dovish tone is in stark contrast with the U.S. Federal Reserve and the Bank of England, which raised interest rates this week to stop fast-rising inflation becoming entrenched.

As widely expected, the BOJ maintained its short-term rate target at -0.1% and that for the 10-year bond yield around 0% at the two-day policy meeting that ended on Friday.

A resource-poor country that relies almost entirely on imports for fuel and gas, Japan is particularly vulnerable to the economic hit from global commodity inflation.

The war-driven spike in energy prices is adding to pressure on the world's third-largest economy, which likely saw growth stall in the current quarter as supply disruptions and COVID-19 curbs hobbled output and consumption.

"Japan's economy is picking up as a trend," the BOJ said in a statement, offering a bleaker view than in January when it said the economy was showing "clearer signs of pick-up."

The BOJ also removed from its statement language projecting a positive economic cycle, under which rising corporate profits drive up wages, capital expenditure and consumption.

"Japan's economy is still in the midst of recovering from the pandemic's impact. What's important for us now is to support the recovery by maintaining easy monetary policy," Kuroda said.

The BOJ warned of fresh risks from the Ukraine crisis, which it said was destabilising markets and boosting corporate costs.

"There is very high uncertainty on the impact developments in Ukraine could have on Japan's economy and prices via markets, raw material prices and overseas economies," the statement said.

The BOJ is likely to more thoroughly assess the fallout from the Ukraine crisis at its next meeting in April, when it will issue fresh quarterly growth and inflation forecasts.

Japan's core consumer prices rose 0.6% in February from a year earlier, marking the fastest pace in two years in a sign of growing inflationary pressure.

Analysts expect consumer inflation to approach 2% from next month due to rising energy costs and the dissipating effect of cellphone fee cuts. But that would still leave Japan's inflation well below 5.9% in the euro zone and 7.9% in the United States.

Inflation is far from being entrenched in Japan, where wage growth remains modest and long-term inflation expectations have barely moved, Kuroda said.

Some analysts doubt whether households can stomach further price rises if wages don't pick up much.

Highlighting the hit to households from rising fuel costs, energy and electricity bills both shot up by around 20% in February from year-before levels, the fastest pace since 1981.

"With inflation and wage growth lagging other countries, the BOJ has no choice but to patiently maintain stimulus at least until Kuroda serves out his term in April 2023," said Hiroshi Shiraishi, senior economist at BNP Paribas Securities.