(Reuters) -Three Russian cosmonauts arrived safely at the International Space Station (ISS) on Friday, docking their Soyuz capsule with the outpost for a mission that continues a 20-year shared Russian-U.S. presence in orbit despite tensions over Russia's invasion of Ukraine.

The arrival of the latest cosmonaut team - warmly welcomed by four Americans, two Russians and a German crewmate already aboard - came a day after the European Space Agency (ESA) announced it had suspended a joint robotic rover mission to Mars with Russia due to the Ukraine conflict.

The rendezvous with the space station capped a flight of three hours and 10 minutes following liftoff of the Soyuz spacecraft from Russia's Baikonur Cosmodrome in Kazakhstan.

"Congratulations on the successful docking," a voice from Russia's mission control said moments later, according to an English translator speaking during a live NASA webcast of the event.

Link-up of the space vehicles took place as the Soyuz and space station flew some 250 miles (400 km) above eastern Kazakhstan, a NASA commentator said.

About 2-1/2 hours later, after the passageway between the station and Soyuz was pressurized, two sets of hatches were opened and the three smiling Soyuz astronauts, dressed in yellow flight suits, floated head-first, one by one, into the ISS.

They were greeted warmly with hugs and handshakes by all seven existing space station occupants who were waiting for them on the other side of the short corridor.

They will be replacing three current ISS crew members scheduled to fly back to Earth on March 30 - cosmonauts Pyotr Dubrov and Anton Shkaplerov and U.S. astronaut Mark Vande Hei.

Vande Hei will have logged a NASA record-breaking 355 days in orbit by the time he returns to Kazakhstan aboard a Soyuz capsule with his two cosmonaut colleagues.

Remaining aboard the space station with the newcomers until the next rotation in a couple of months are three NASA astronauts - Tom Marshburn, Raja Chari and Kayla Barron - and German crewmate Matthias Maurer of the European Space Agency.

Those four crew members arrived together in November aboard a SpaceX Crew Dragon craft launched from NASA's Kennedy Space Center in Florida to begin a six-month stint in orbit.

Launched in 1998, the research platform has been continuously occupied since November 2000 while operated by a U.S.-Russian-led partnership including Canada, Japan and 11 European countries.

According to NASA, Friday's arrival marked the first time a spacecraft docked to the station's newly added Prichal module, a spherical-shaped unit launched to ISS and attached to the outpost's Russian segment in November 2021.

The durability of U.S.-Russian collaboration in space is being tested by heightened antagonism between the two former Cold War adversaries over Russia's three-week-old invasion of Ukraine.

Dmitry Rogozin, director-general of Russian space agency Roscosmos, then lashed out in a series of Twitter posts suggesting the U.S. sanctions could "destroy" ISS teamwork and lead to the space station falling out of orbit.

A week later, Rogozin announced that Russia would stop supplying or servicing Russian-made rocket engines used by two U.S. aerospace NASA suppliers, suggesting U.S. astronauts could use "broomsticks" to get to orbit.

At about the same time, Russia said it ceased joint ISS research with Germany and forced the cancellation of a British satellite launch from Baikonur.

The Roscosmos chief also said last month that Russia was suspending its cooperation with European launch operations at the European Spaceport in French Guiana.

On Thursday, the ESA announced that it would be impossible to continue cooperating with Russia on the ExoMars mission, which had called for a Russian rocket to launch a European-made rover to Mars later this year. Rogozin responded by saying Russia would start work on its own Mars mission.

The space station was born in part from a foreign policy initiative to improve American-Russian relations following the collapse of the Soviet Union and the Cold War hostility that spurred the original U.S.-Soviet space race.

Rogozin's recent actions have prompted some in the U.S. space industry to rethink the NASA-Roscosmos partnership. NASA officials have said that U.S. and Russian ISS crew members, while aware of events on Earth, were still working together professionally and that geopolitical tensions had not infected the space station.

(Reporting by Steve Gorman in Los Angeles; editing by Will Dunham and Jason Neely) 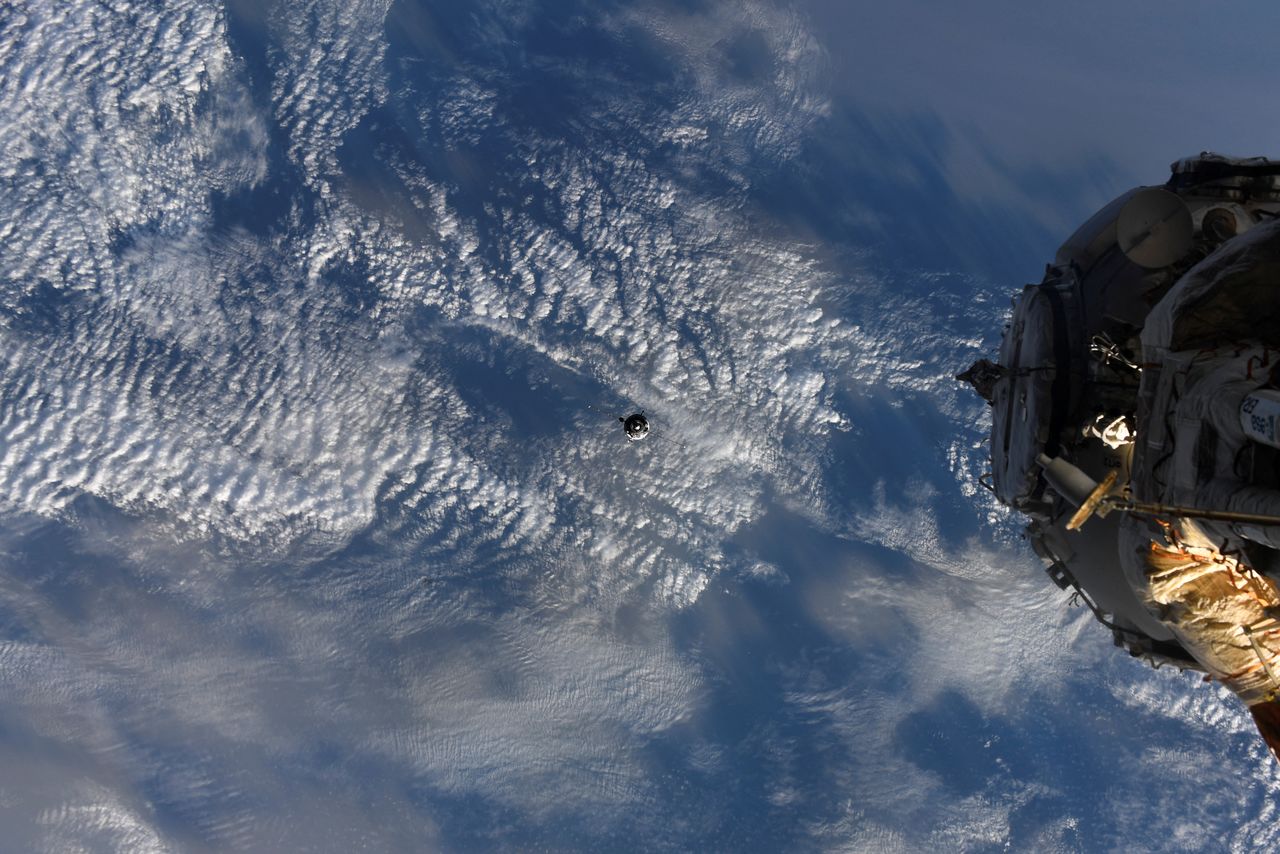 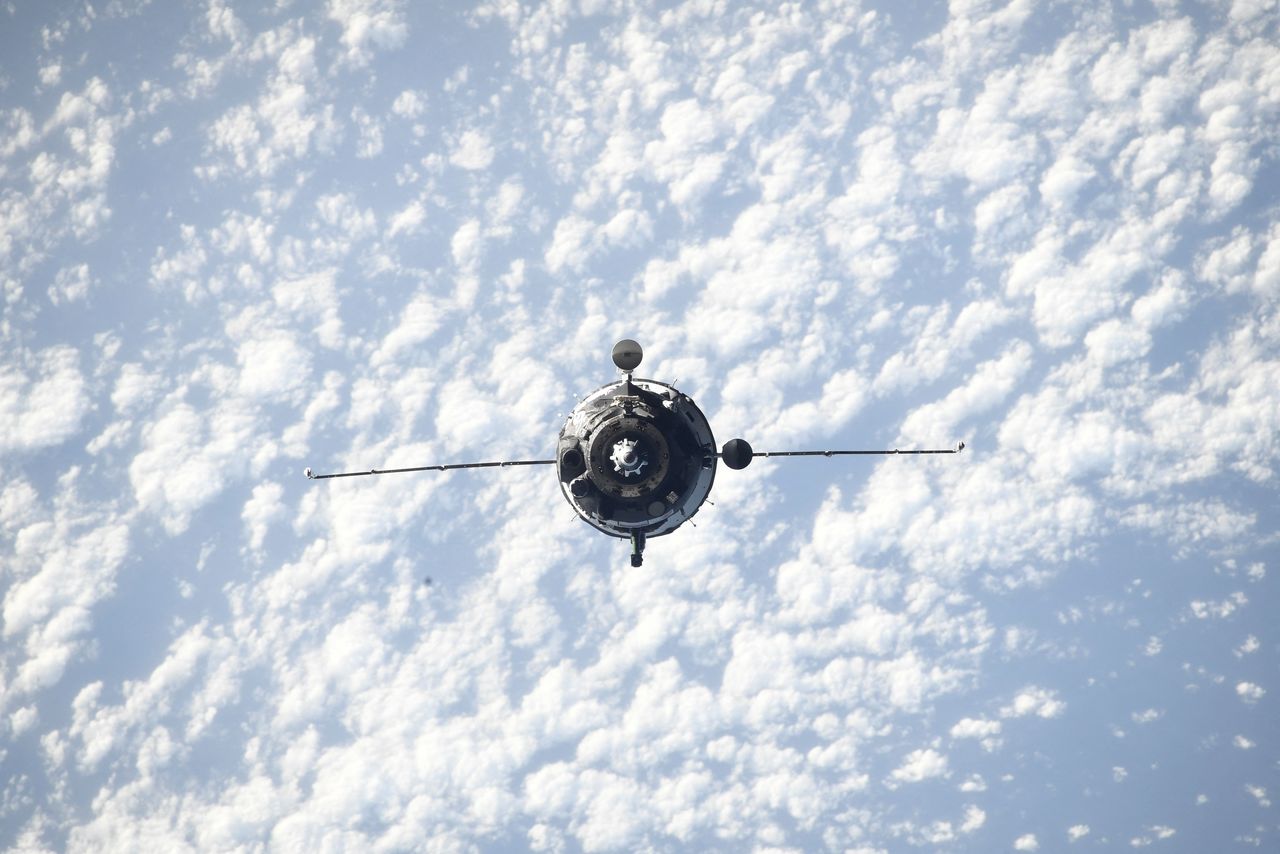 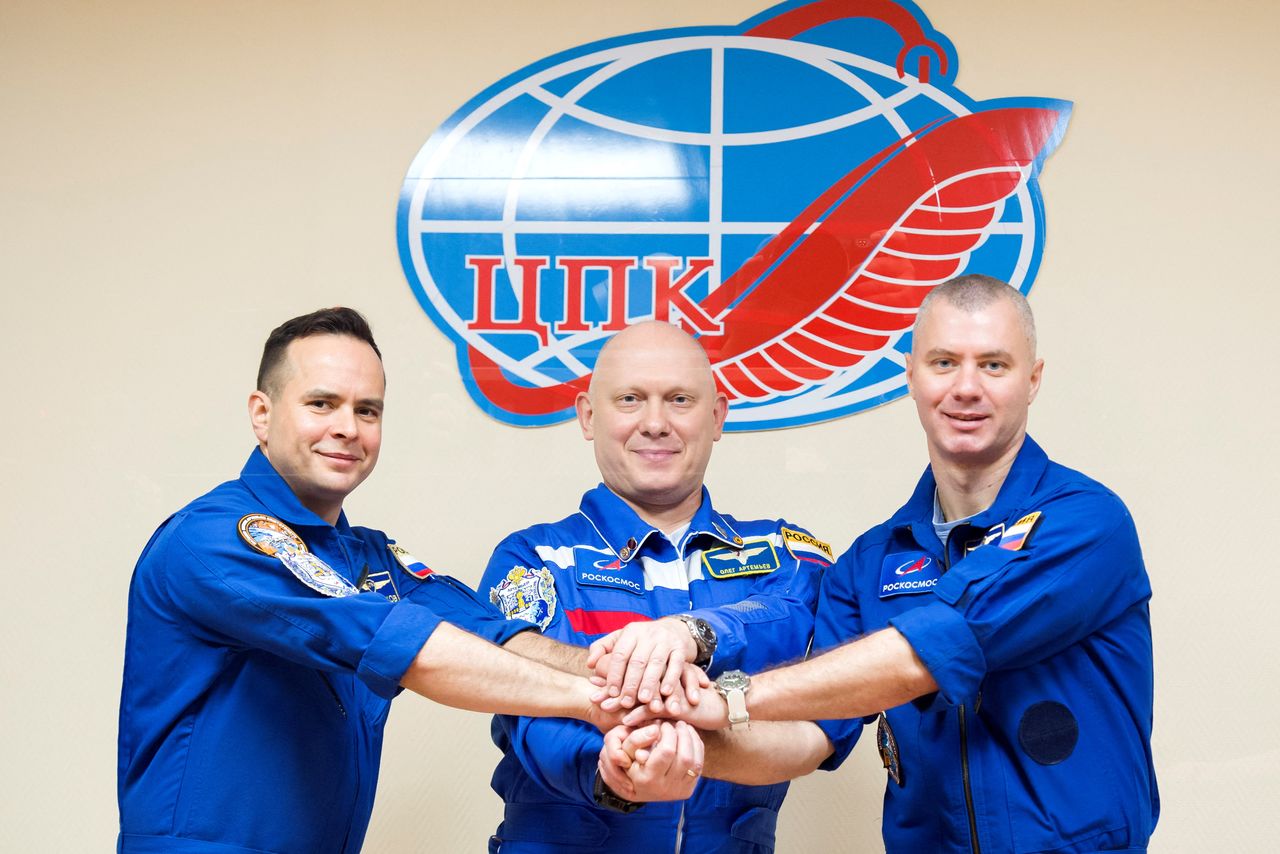 Russian cosmonauts Oleg Artemyev, Denis Matveev and Sergey Korsakov pose for a picture during a news conference ahead of the expedition to the International Space Station (ISS) at the Baikonur Cosmodrome, Kazakhstan March 17, 2022. Roscosmos/Handout via REUTERS 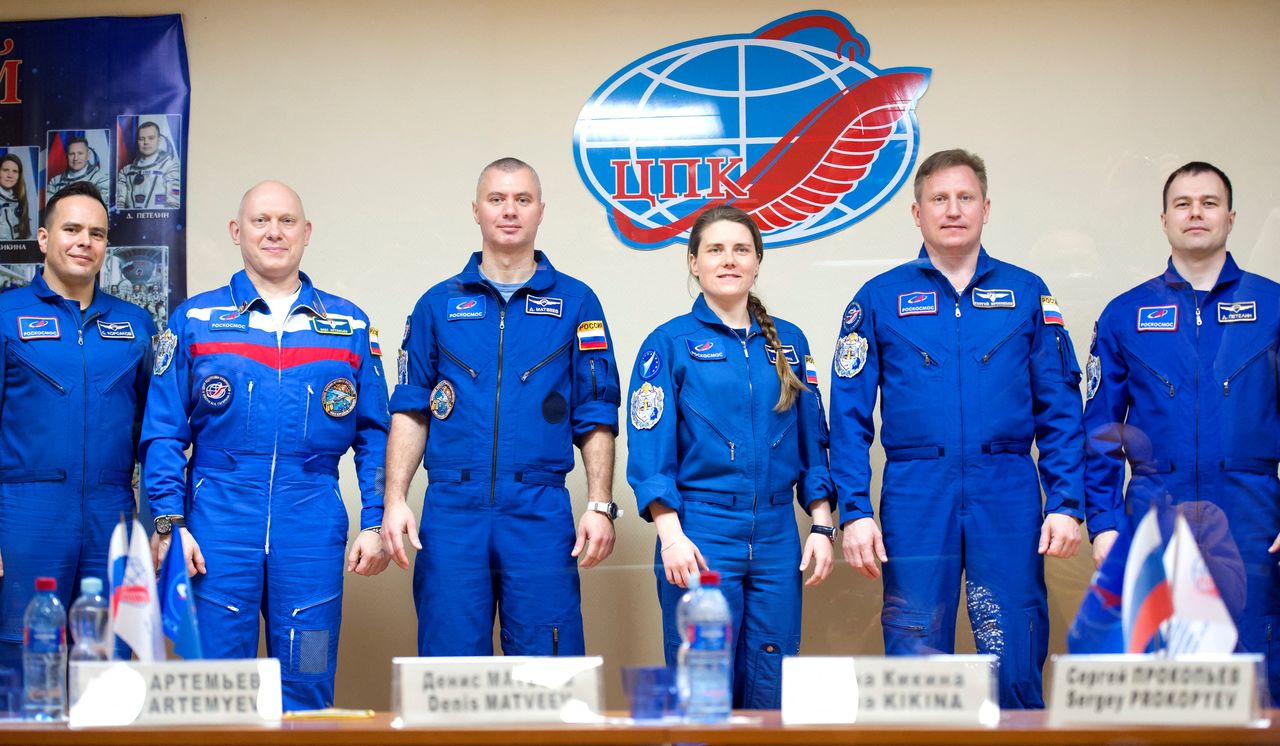 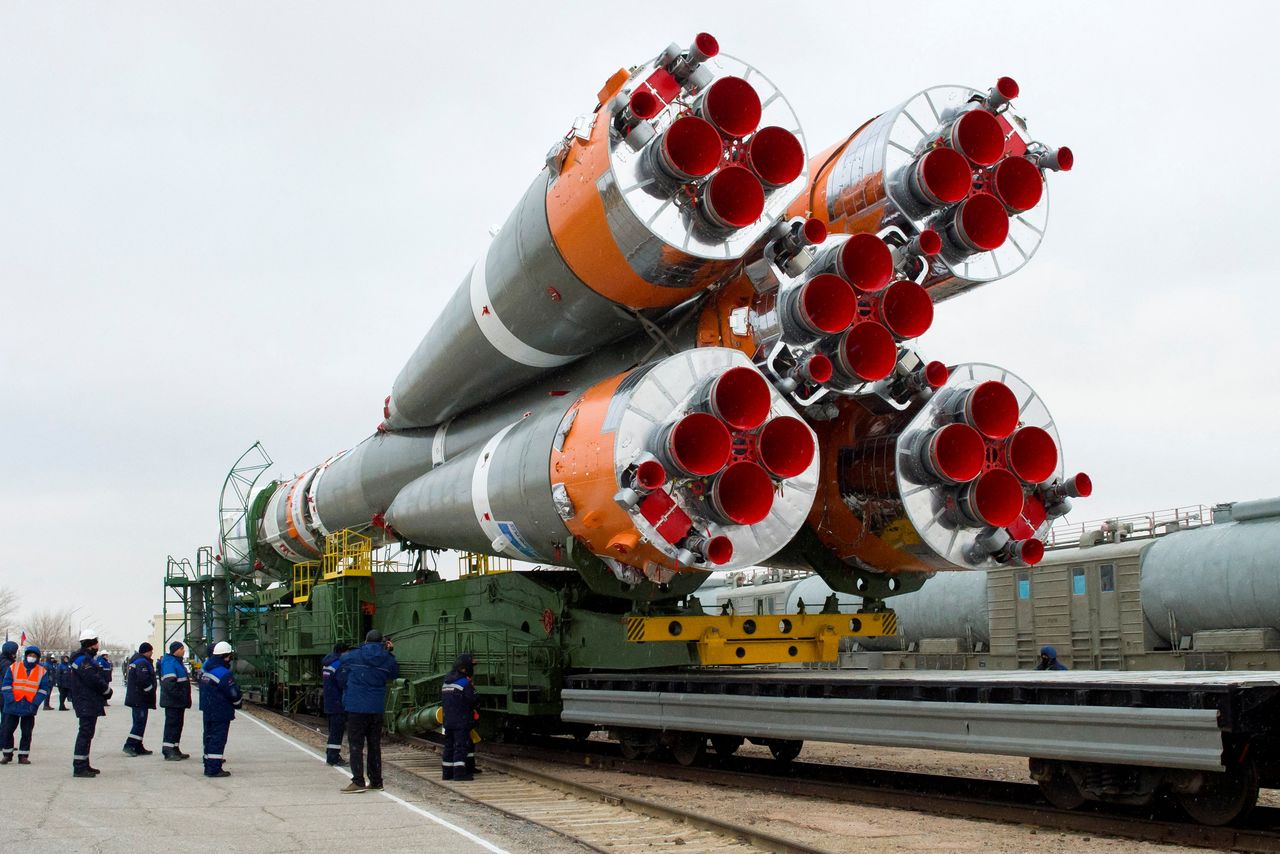 The Soyuz-2.1a rocket booster with the Soyuz MS-21 spacecraft is rolled out onto the launchpad ahead of its upcoming launch to the International Space Station (ISS), at the Baikonur Cosmodrome, Kazakhstan March 15, 2022. Roscosmos/Handout via REUTERS