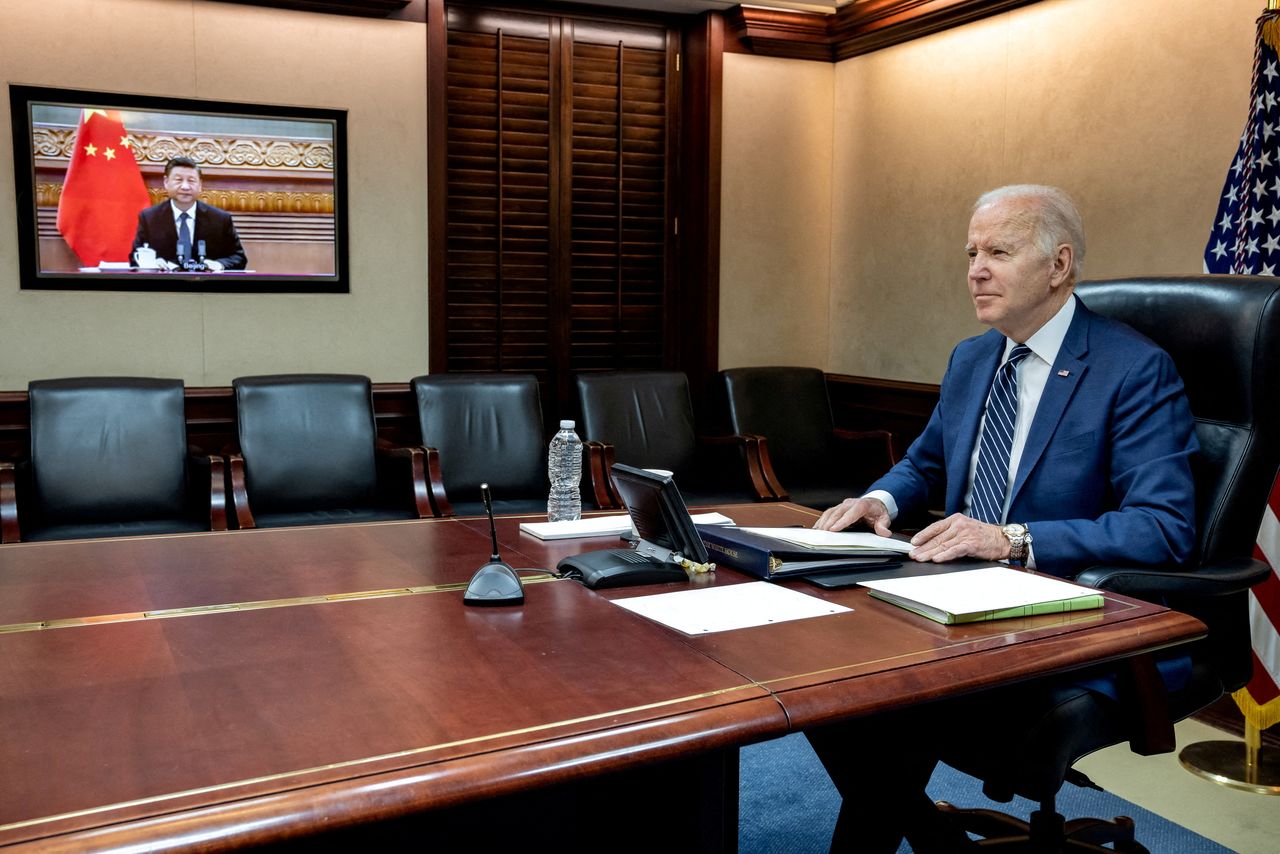 WASHINGTON (Reuters) - U.S. President Joe Biden's warning of "consequences" for any aid China may give to Russia's Ukraine war effort aims to force Chinese President Xi Jinping to choose a longstanding lucrative trade relationship with the West over a growing strategic partnership with Moscow.

Based on trade flows alone, both China and the United States have a lot at stake after Biden's nearly two-hour video call with Xi on Friday, with the White House confirming that sanctions on Beijing were an option.

Despite growing trade ties to Southeast Asia and an economy that is less dependent on trade over the past decade, China's economic interests remain heavily skewed to Western democracies, trade data reviewed by Reuters showed.

Siding with political ally Russia would make little economic sense for China, according to analysts, as the United States and European Union still consume more than a third of China's exports.

"On the pure economic question, if China were to have to make the choice - Russia versus everyone else - I mean, it's a no-brainer for China because it's so integrated with all of these Western economies," said Chad Bown, a senior fellow at the Washington-based Peterson Institute for International Economics think tank who tracks China trade closely.

"China has normal trade, economic, financial, energy cooperations with Russia," Qin told the CBS program "Face the Nation" when asked if Beijing would provide financial support to Moscow. "These are normal business between two sovereign countries, based on international laws, including WTO (World Trade Organization) rules."

Targeting Beijing with the type of broad economic sanctions that have been imposed on Russia would have potentially serious consequences for the United States and globally, given that China is the world's second-largest economy and the largest exporter. As China's economy has ballooned to $16 trillion in the past 20 years, its dependence on trade with other countries for its economic well-being has diminished.

The wealthy G7 countries that form the heart of an anti-Russia alliance following last month's invasion of Ukraine still consume more than a third of China's exports. That is a drop from almost half of China's exports nearly two decades ago, but a relatively steady share since 2014, when Russia annexed Ukraine's Crimea region.

The share of China's exports to Association of Southeast Asian Nations (ASEAN) countries, with which China recently has forged new trade agreements, has doubled to about 15%, eclipsing Japan in importance. But China's January-February 2022 trade data showed that exports to the European Union grew the most at 24%.

Russia's overall trade with China has grown since the West first imposed sanctions on Moscow in response to its annexation of Crimea.

But China's exports to Russia have remained between 1% and 2% for the past 20 years.

Russian imports from China track those of many other countries, with electronics and consumer goods including cellphones, computers, apparel, toys and footwear topping the list.

China exported 10 times as many cellphones, by value, to the United States alone, at $32.4 billion in 2020, based on UN Comtrade data.

China's imports from Russia are dominated by oil. At $27 billion in 2020, crude oil and other petroleum dwarfs all other imports from Russia, mainly commodities including copper, softwood lumber, liquefied natural gas, coal, metals and ores.

Title: China's top imports from Russia: all about the oil, https://graphics.reuters.com/UKRAINE-CRISIS/TRADE-CHINA/xmvjoezddpr/chart.png

Turning Western sanctions against China would cause significant difficulties for the United States, which heavily depends on China for imports of key consumer goods from computers and cellphones to toys and textiles.

"In America, we don't depend on the Russian economy - hardly for anything," Bonnie Glick, director of Purdue University's Center for Tech Diplomacy, told a Commerce Department forum on Monday.

"But an economic or a trade war with China would have tremendous impacts," Glick said, adding that it was important for the United States to reduce trade reliance on China.

(Reporting by David Lawder; Editing by Will Dunham and Heather Timmons)