Biden says Putin could use chemical, biological weapons in Ukraine

By Natalia Zinets and James Mackenzie

Amid the devastation caused by Russia's unceasing bombardment of Ukrainian cities, President Volodymyr Zelenskiy highlighted the death of a 96-year-old survivor of Nazi concentration camps, killed in his flat by shelling in Kharkiv.

Nearly four weeks into their invasion, Russian troops have failed to capture any major Ukrainian city and have been halted on nearly all fronts, but are hammering residential districts with artillery, missiles and air strikes.

Russian forces were expected to continue to attack critical infrastructure with "high-precision weapons and indiscriminate munitions”, Ukraine's armed forces said in a statement.

Russia has been saying in recent weeks that Ukraine might possess chemical or biological weapons. Biden said those accusations were not merely false, but a sign that President Vladimir Putin might be planning to use such weapons himself.

"Now he's talking about new false flags he's setting up including, asserting that we in America have biological as well as chemical weapons in Europe, simply not true," Biden said at a business event on Monday. "They are also suggesting that Ukraine has biological and chemical weapons in Ukraine. That's a clear sign he's considering using both of those."

Putin calls the war, the biggest attack on a European state since World War Two, a "special military operation" to disarm Ukraine and protect it from "Nazis". The West calls that a false pretext for an unprovoked war of aggression.

In an address overnight, Zelenskiy drew attention to the death of Boris Romanchenko, a Holocaust survivor killed when his flat in besieged Kharkiv was shelled last week.

"Please think about how many things he has come through," said Zelenskiy. "But (he) was killed by a Russian strike, which hit an ordinary Kharkiv multi-storey building. With each day of this war, it becomes more obvious what 'denazification' means to them."

"We mourn the loss of a close friend," the memorial said.

In killing him, "Putin managed to 'accomplish' what even Hitler couldn't," Ukraine's Defence Ministry said on Twitter.

Biden is due to travel to Europe this week for meetings with allied leaders to discuss tighter sanctions on Russia, on top of the unprecedented financial penalties already announced. he discussed Russia's "brutal" tactics in a call with European leaders on Monday, the White House said.

Russia's siege and bombardment of Ukrainian cities, in particular the southern port of Mariupol which has been encircled for weeks, is increasing pressure for action.

Sanctions have banished Russia from international commerce to a degree never before visited on such a large economy. But an exception has largely been carved out for Russian energy exports to Europe, its biggest oil and gas customer.

EU foreign ministers on Monday disagreed on whether and how to include energy in sanctions, with Germany saying the bloc was too dependent on Russian oil to impose an embargo.

The conflict has forced nearly a quarter of Ukraine's 44 million people from their homes, including more than 3.5 million refugees who have fled the country, half of them children, in one of the fastest exoduses ever recorded.

The city of Kharkiv came under increased artillery fire overnight, regional governor Oleh Synyehubov said in televised comments. The governor of the Zaporizhzhia region said buses evacuating civilians from front-line areas were hit by shelling on Monday and four children were wounded.

Serhiy Gaidai, governor of Luhansk, one of two eastern regions that Russia demands Ukraine cede to pro-Russian separatists, said the entire region was now being shelled.

"We are continuing to evacuate people for as long as we can," he said. "We see that ... the Russians' only goal is to destroy Ukraine."

On Monday, Ukraine rejected a Russian ultimatum to surrender Mariupol, where hundreds of thousands of civilians have been trapped under constant bombardment, with no access to food, heat, power or water for weeks.

A part of Mariupol now held by Russian forces, reached by Reuters on Sunday, was an eerie wasteland. Several bodies wrapped in blankets lay by a road. Windows were blasted out and walls were charred black. People who came out of basements sat on benches amid the debris, bundled up in coats.

A group of men were digging a grave in a patch of grass by the roadside. 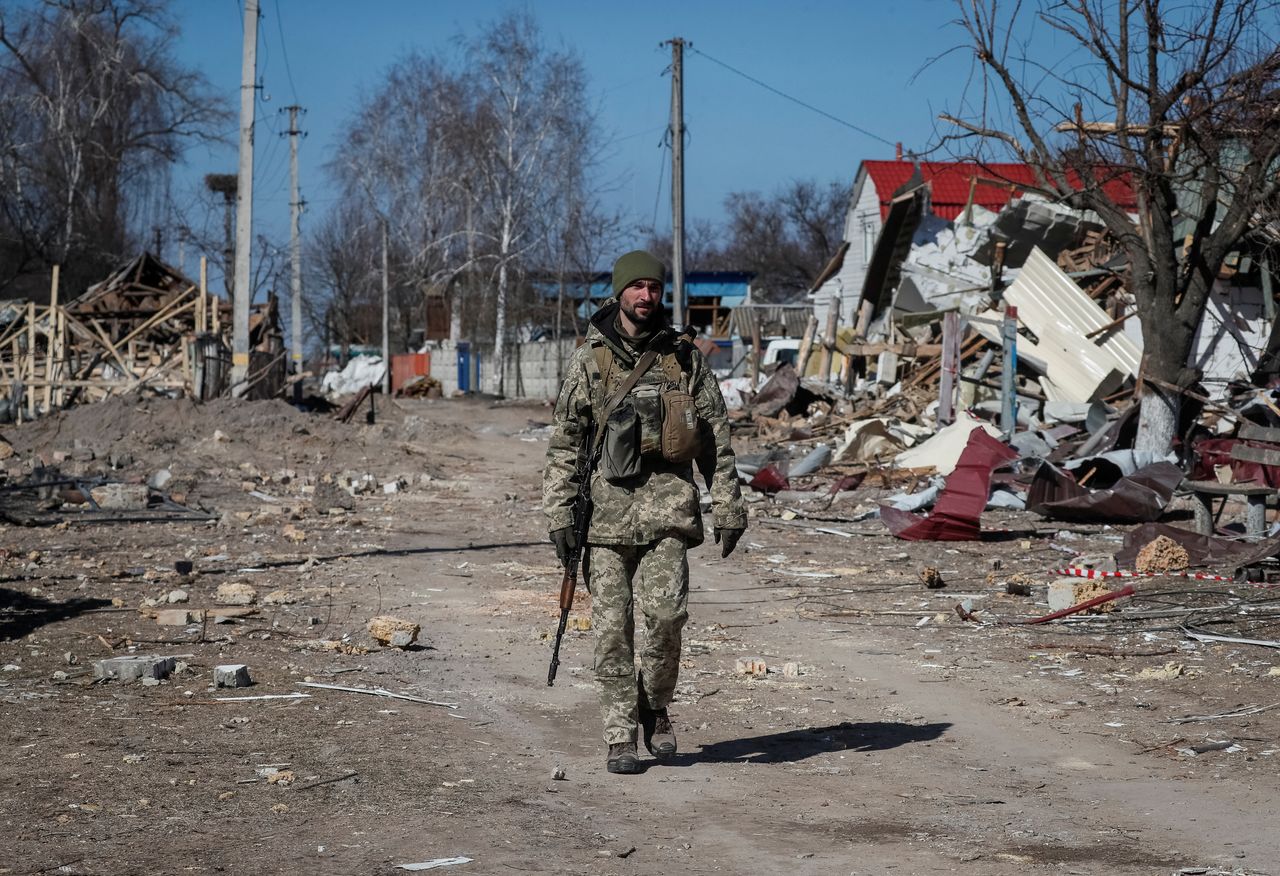 A Ukrainian service member walks, as the Russian invasion continues, in a destroyed village on the front line in the east Kyiv region, Ukraine March 21, 2022. REUTERS/Gleb Garanich 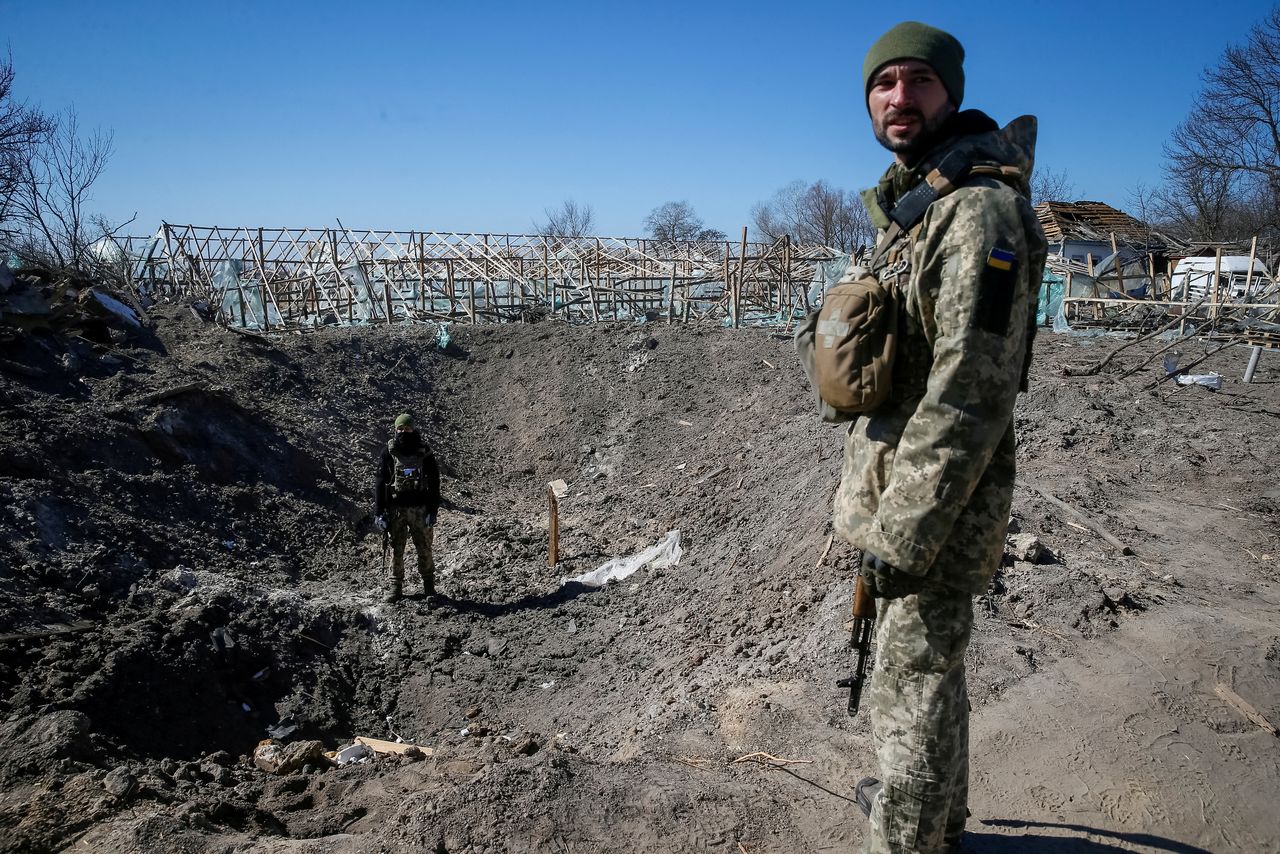 Ukrainian service members inspect a shell crater, as the Russian invasion continues, in a village on the front line in the east Kyiv region, Ukraine March 21, 2022. REUTERS/Gleb Garanich 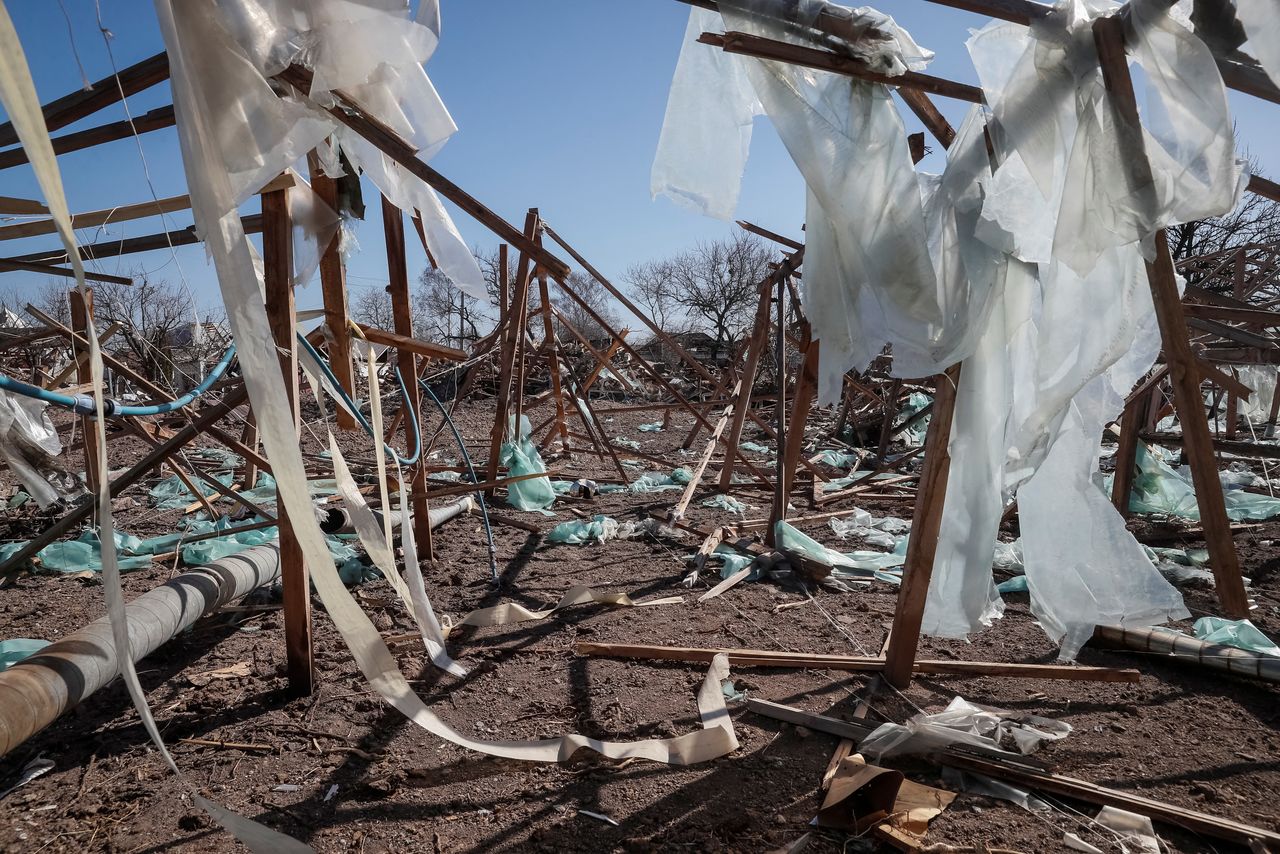 Destroyed greenhouses are seen in a village, as the Russian invasion continues, on the front line in the east Kyiv region, Ukraine March 21, 2022. REUTERS/Gleb Garanich 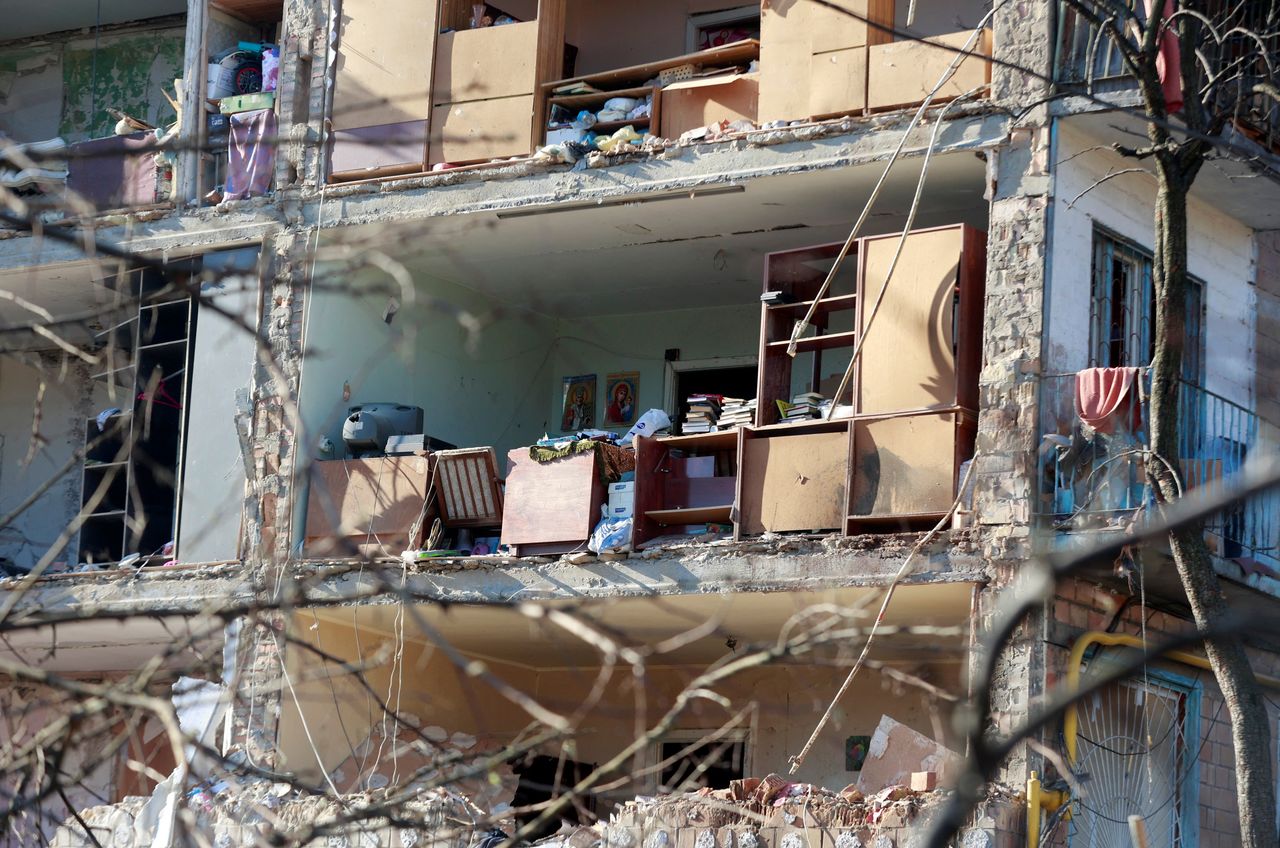 A view shows an apartment building destroyed during an air raid, amid Russia's invasion of Ukraine, in Kyiv, Ukraine March 21, 2022. REUTERS/Serhii Nuzhnenko 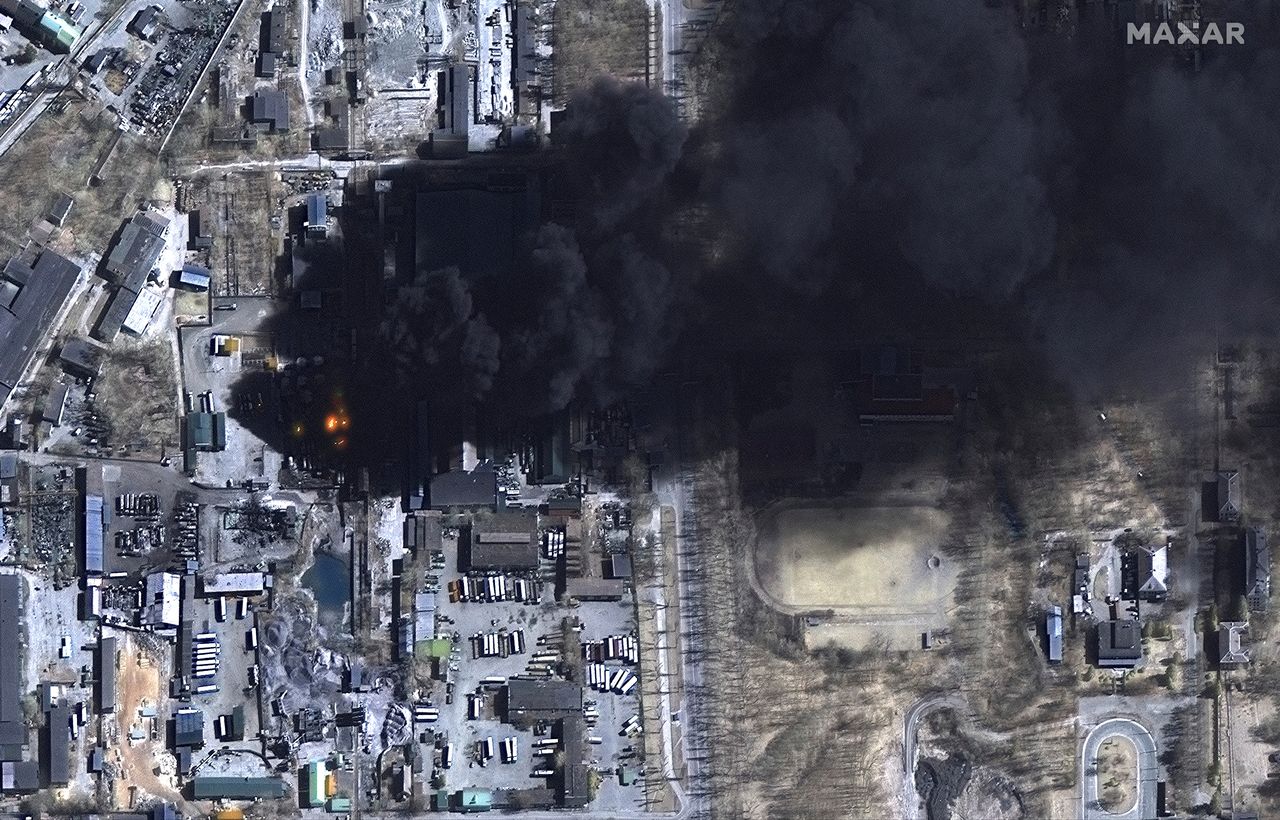 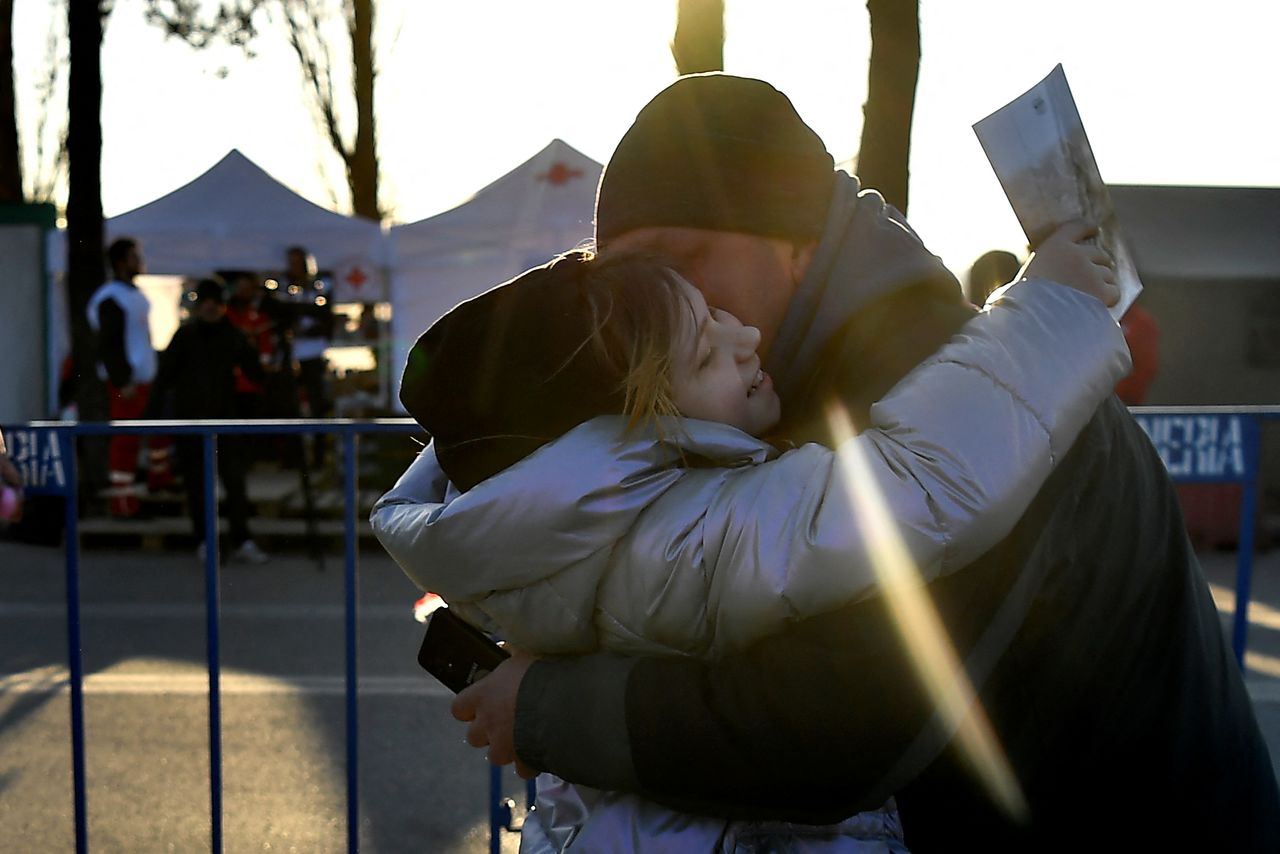 A girl embraces her father as he crossed the border after fleeing from Kharkiv in Ukraine to Romania, following Russia's invasion of Ukraine, at the border crossing in Siret, Romania, March 21, 2022. REUTERS/Clodagh Kilcoyne