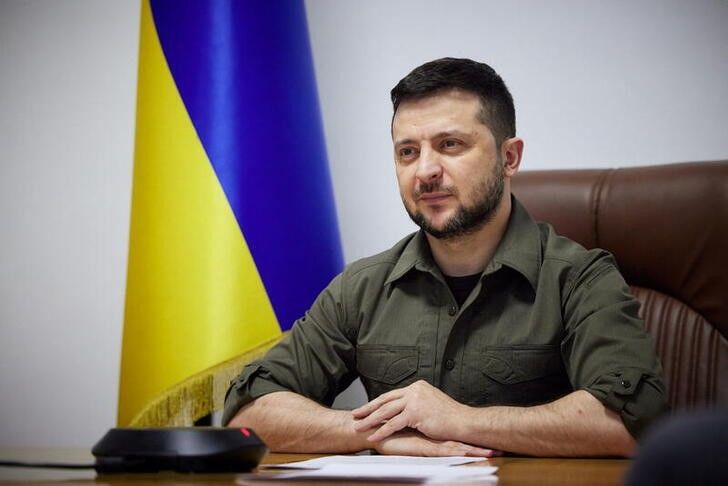 By Natalia Zinets and Elaine Lies

(Reuters) -Ukrainian President Volodymyr Zelenskiy urged Japan on Wednesday to ramp up pressure on Russia with a trade embargo, making an unprecedented direct appeal to parliament that invoked the two nations' shared experience of nuclear disaster.

Speaking to lawmakers by video link in a gesture never previously accorded to a foreign leader, Zelenskiy thanked Japan for leading the way among Asian nations in condemning Russia's invasion of Ukraine and launching sanctions.

The address was covered live by almost all commercial broadcasters, highlighting the rare interest in the war in a country where domestic issues usually dominate headlines.

"An embargo on trade with Russia is necessary," said Zelenskiy, who wore a zipped-up military jacket. "It is necessary to remove companies from the Russian market so that money does not go to the Russian army."

Japan's sanctions on 76 individuals, seven banks and 12 other bodies in Russia, imposed in response to the invasion, now cover defence officials and state-owned arms exporter Rosoboronexport.

It has also said it will revoke Russia's trade status of most favoured nation.

Zelenskiy, who received a standing ovation at the end of his speech, thanked Japan for leading the way among Asian nations in condemning the invasion and launching sanctions.

"You were the first in Asia who really began to put pressure on Russia to restore peace, who supported sanctions against Russia, and I urge you to keep doing this," Zelenskiy said.

Responding to the sanctions, Russia, which calls its action in Ukraine "a special operation", withdrew on Tuesday from peace treaty talks with Japan and froze joint economic projects related to the disputed Kuril islands.

Known in Japan as the Northern Territories, they are one of the main barriers to a pact between the two nations to formally end World War Two.

Asked on Tuesday about economic cooperation with Russia, Kishida said Japan valued any opportunity to secure inexpensive energy, referring to projects in Sakhalin, following withdrawals by Shell and Exxon Mobil.

A sombre Zelenskiy urged Japan to do more.

"I urge you to unite the efforts of the Asian states, your partners, in order to stabilise the situation, so that Russia seeks peace and stops the tsunami of its harsh invasion."

Without citing evidence, Zelenskiy said Russian forces were preparing new attacks from the so-called exclusion zone around the Chernobyl nuclear power station after occupying the defunct plant last month in the early stages of the war.

He gave no details.

"The world is on the verge of many new crises," Zelenskiy added. "The environmental and food challenges are unprecedented."

Kishida sat in the front row of his audience, with Foreign Minister Yoshimasa Hayashi and Defence Minister Nobuo Kishi beside him. Later the prime minister told reporters he was touched by Zelenskiy's speech.

Hayashi said Zelenskiy's references to the Chernobyl disaster in 1986 struck a chord.

Japan's triple disaster of March 2011 caused meltdowns at the Fukushima Daiichi power plant and irradiated a vast swathe of its northeast. The worst nuclear disaster since Chernobyl forced tens of thousands of people from their homes.

"We have always said that any kind of attack against a nuclear power plant is absolutely unacceptable," Hayashi told reporters.

"President (Zelenskiy) didn’t give the name Fukushima, but he talked about it (the nuclear power plants) and spoke with passion of how strongly the people of Ukraine feel about returning to their home."