By Jarrett Renshaw and Pavel Polityuk

BRUSSELS/LVIV/MARIUPOL, Ukraine (Reuters) - Western leaders piled on military and humanitarian aid for Ukraine on Thursday and denounced Moscow's invasion of its neighbour as "barbarism" as thousands in besieged cities sheltered underground from Russian bombardment.

NATO announced plans for new combat units in four eastern European countries near Ukraine, while the United States and Britain increased aid and expanded sanctions to new targets, including a woman who London said was the stepdaughter of Russia's foreign minister.

"The single most important thing is for us to stay unified and the world continue to focus on what a brute this guy is and all the innocent people's lives that are being lost and ruined," Biden told reporters in Brussels, referring to Russian President Vladimir Putin.

The European Union was set to unveil steps to wean itself off Russian energy, something likely to drive up fuel costs even further around the continent. Moscow supplies 40% of the EU's collective gas needs and more than a quarter of its oil imports.

The measures stopped short of President Volodymyr Zelenskiy's calls for a full boycott of Russian energy and a no-fly zone over Ukraine where Moscow's bombs are wreaking havoc.

Responding to Thursday's show of unity in Brussels, Moscow said the West had itself to blame for the war by arming the "Kyiv regime".

The Russian invasion unleashed on Feb. 24. has killed thousands of people, sent 3.6 million abroad, smashed cities and driven more than half of Ukraine's children from their homes, according to the United Nations.

"A beautiful Mariupol used to be and suddenly it was turned into dust," lamented 83-year-old Raisa Kairat in the besieged southern port that has become a wasteland.

In Mariupol, which lies between Russian-annexed Crimea and eastern areas held by Russian-backed separatists, thousands are in basements with scant water, food, medicine or power, seeking shelter from heavy Russian bombardment.

In one part captured by Russian troops, a patch of grass between blasted buildings has become a makeshift graveyard. Freshly dug mounds are marked with plastic flowers and crosses made from broken window frames.

"It could have been me," sobbed Viktoria as she buried her 73-year-old stepfather Leonid, killed when the car ferrying him to hospital was blown up.

In a month of fighting, Ukraine has fended off what many analysts had anticipated would be a quick Russian victory.

So far, Moscow has failed to capture any major city. Despite relentless shelling by Russia, its armoured columns have barely moved in weeks, stalled near the capital Kyiv and besieging cities in the east.

They have taken heavy casualties and are low on supplies, and U.S. officials told Reuters that Russia is suffering high failure rates for some of its precision-guided missiles.

Ukraine says it is now shifting to the offensive and has pushed back Russian forces, including north of Kyiv. Its armed forces said they repulsed five Russian attacks in the country's east on Thursday, killing up to 130 soldiers. Reuters was unable to verify this.

Ukraine also said its forces had destroyed the Russian landing ship the "Orsk" at the Russian-occupied port of Berdyansk.

Video footage, which Reuters confirmed was from Berdyansk, showed smoke rising from a blaze at a dock and the flash of an explosion. Russian officials did not immediately respond to requests for comment.

The Kremlin accuses NATO of an "hysterical and inadequate" understanding of events in Ukraine, a former Soviet Republic linked since the 9th century when Kyiv became the capital of the ancient state of Rus.

One woman sheltering in the metro, Natalia Shaposhnik, said she knew Russians who did not believe that civilians have been shelled, despite the carnage of the past four weeks.

"I wrote to them (that) I've been sheltering with my child in the metro for a month and they don't believe me. They say, 'It is your own fault, you are to blame, it is you, you, you,'" she said.

At the U.N., almost three-quarters of the General Assembly demanded aid access in Ukraine and criticized Russia for the "dire" humanitarian situation - the second time the body has overwhelmingly isolated Moscow over the invasion.

Chechen leader Ramzan Kadyrov, a Putin ally, posted on social media that Chechen fighters had captured the main administrative building in Mariupol and raised their flag there. His account could not be confirmed independently.

In the Russian-held part of the city, trucks arrived with food supplies in boxes bearing the "Z" symbol of what Russia calls its "special operation". Hundreds of people, many elderly, lined up as men in Russian emergencies ministry uniforms distributed the boxes.

"We are planning on leaving but it's very difficult at the moment," said one woman there, Alexandra, whose diabetic husband slipped into a coma and died before the aid arrived. He is buried in a flowerbed.

"I can't leave my husband in a flowerbed ... And then we have nowhere to go." 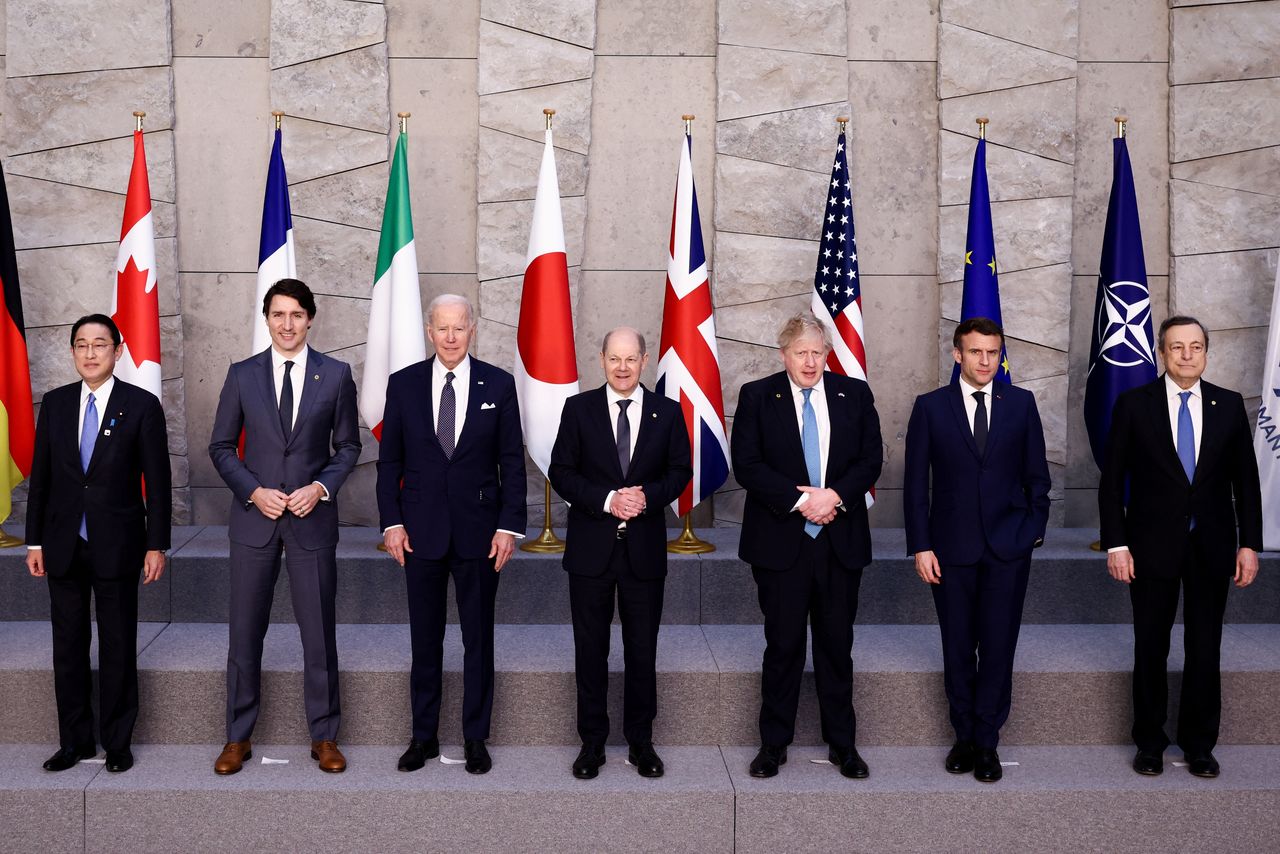 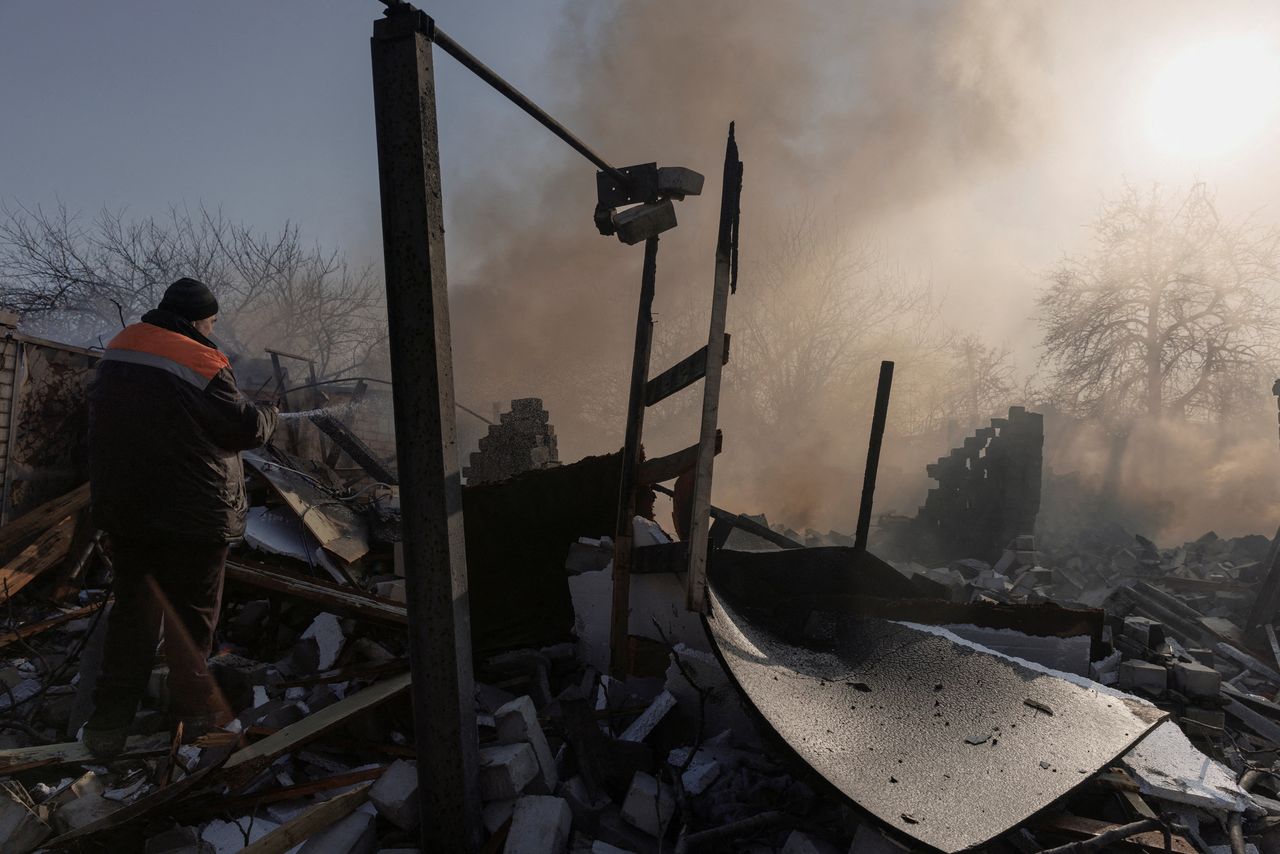 A resident extinguishes a fire after a bombing destroyed a family home in a northern district of Kharkiv as Russia's attack on Ukraine continues, Ukraine, March 24, 2022. REUTERS/Thomas Peter 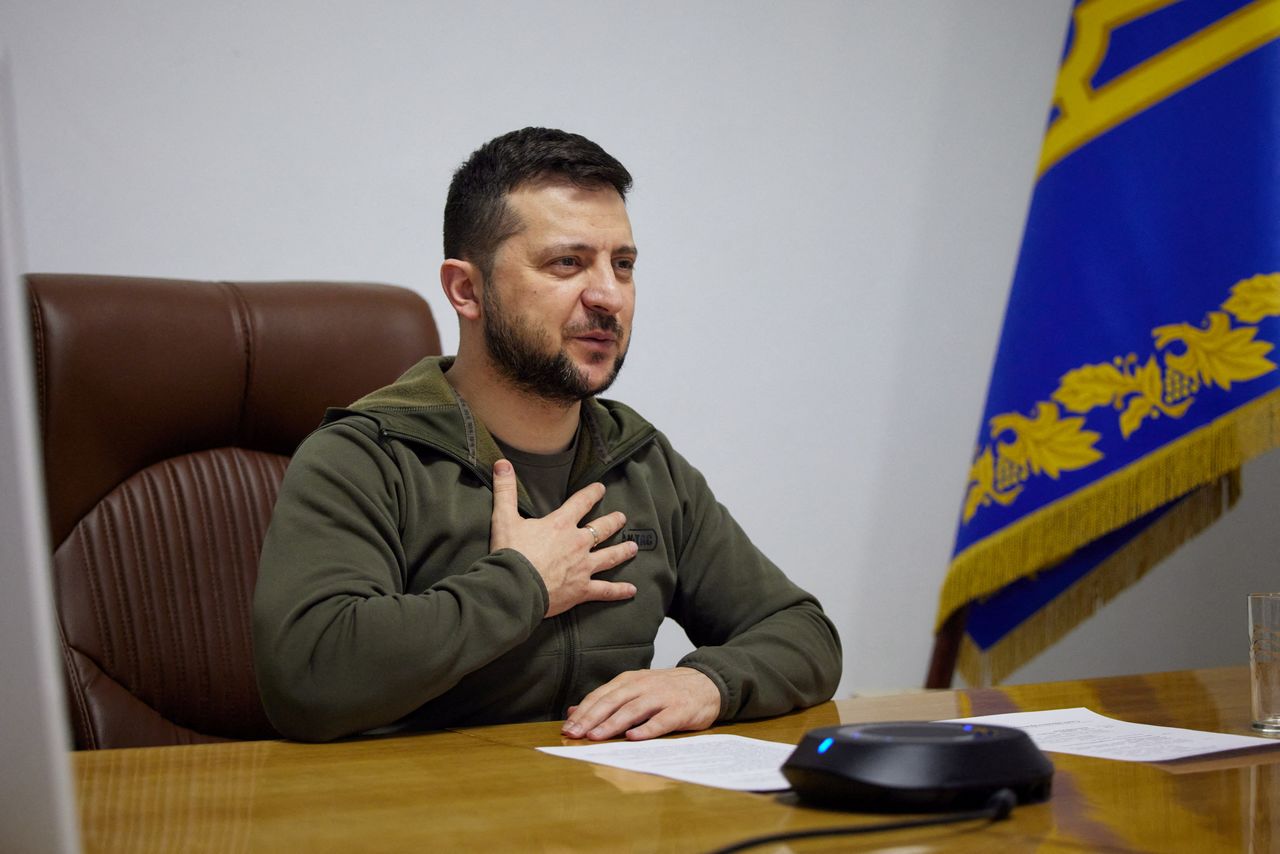 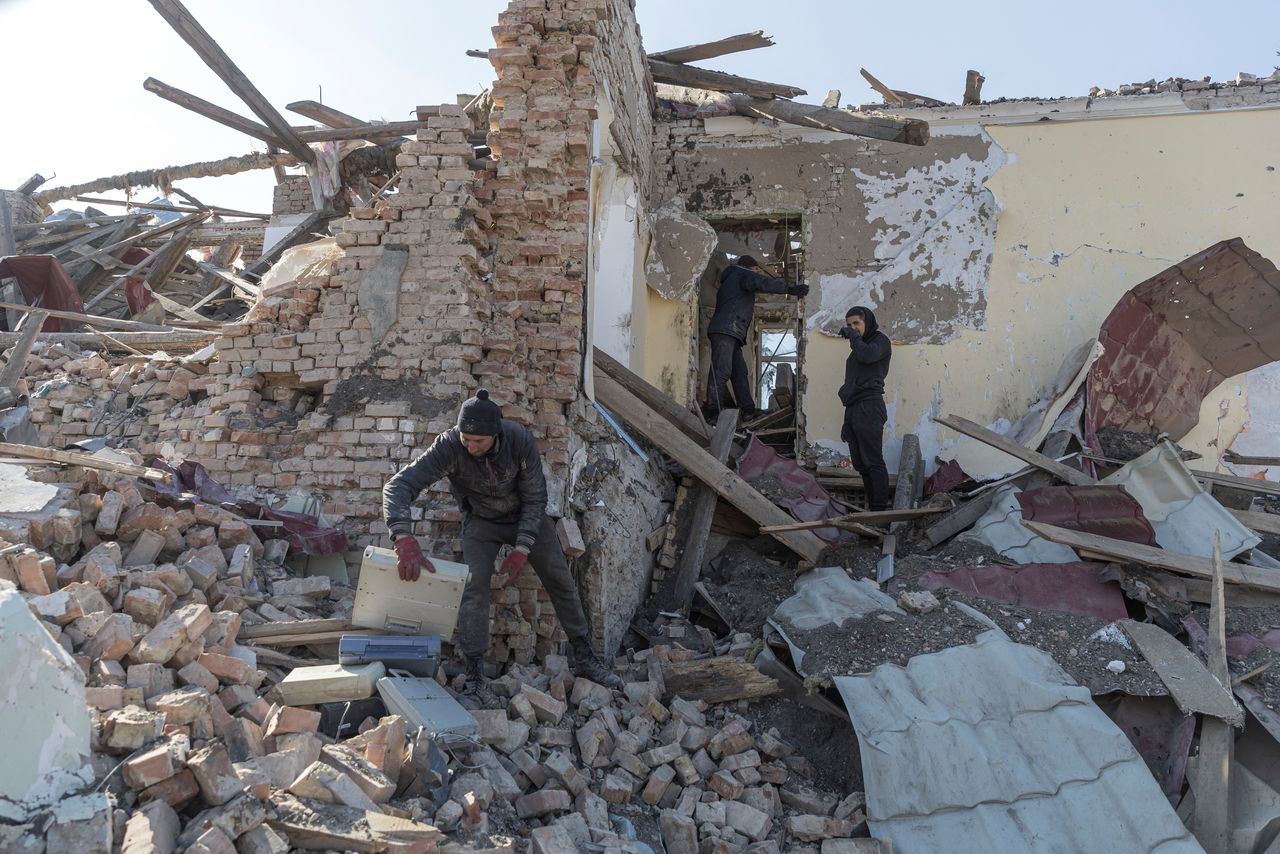 Locals clean up debris from the cultural centre destroyed in shelling earlier this month, as Russia's invasion of Ukraine continues, in the village of Byshiv outside Kyiv, Ukraine, March 24, 2022. REUTERS/Marko Djurica 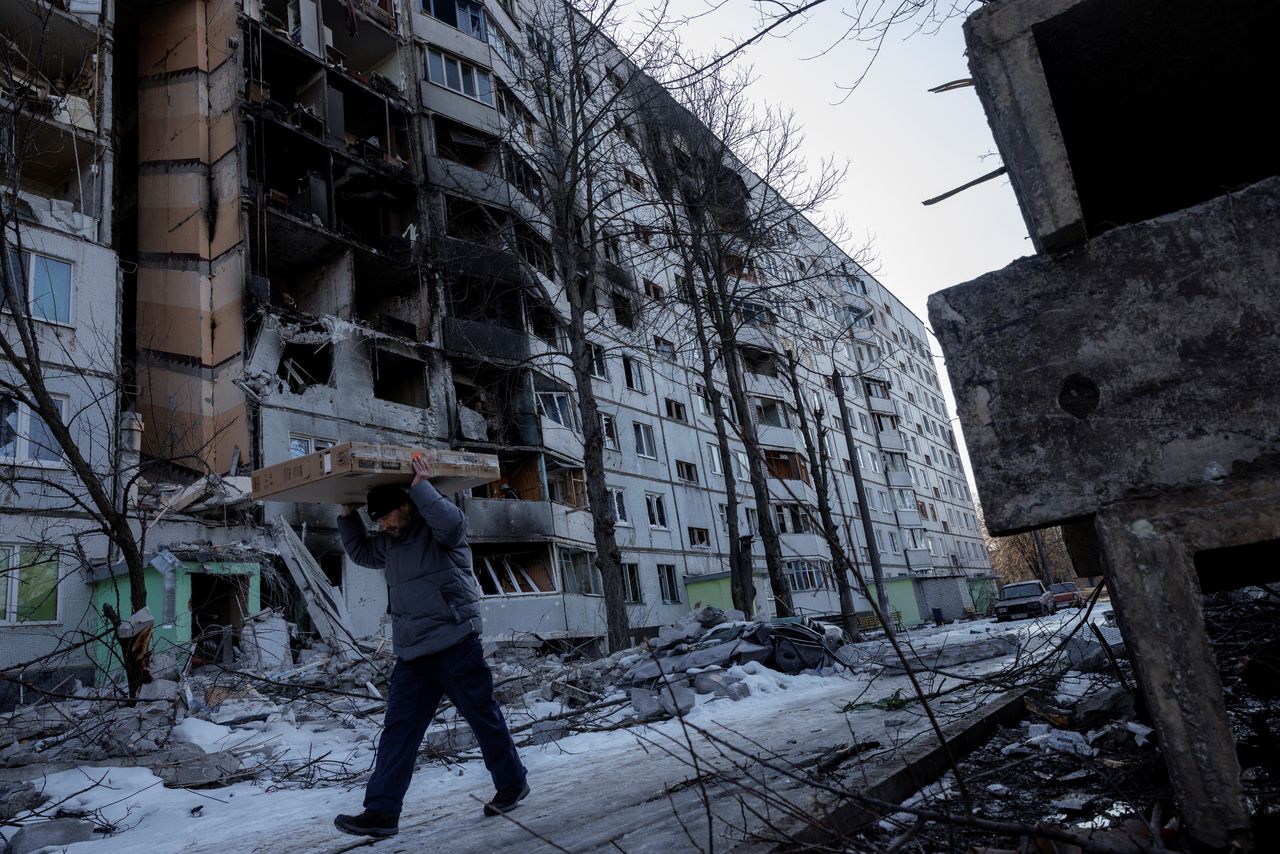 A man carries belonging out of a house that was hit by bombing in a northern district of Kharkiv as Russia's attack on Ukraine continues, Ukraine, March 24, 2022. REUTERS/Thomas Peter 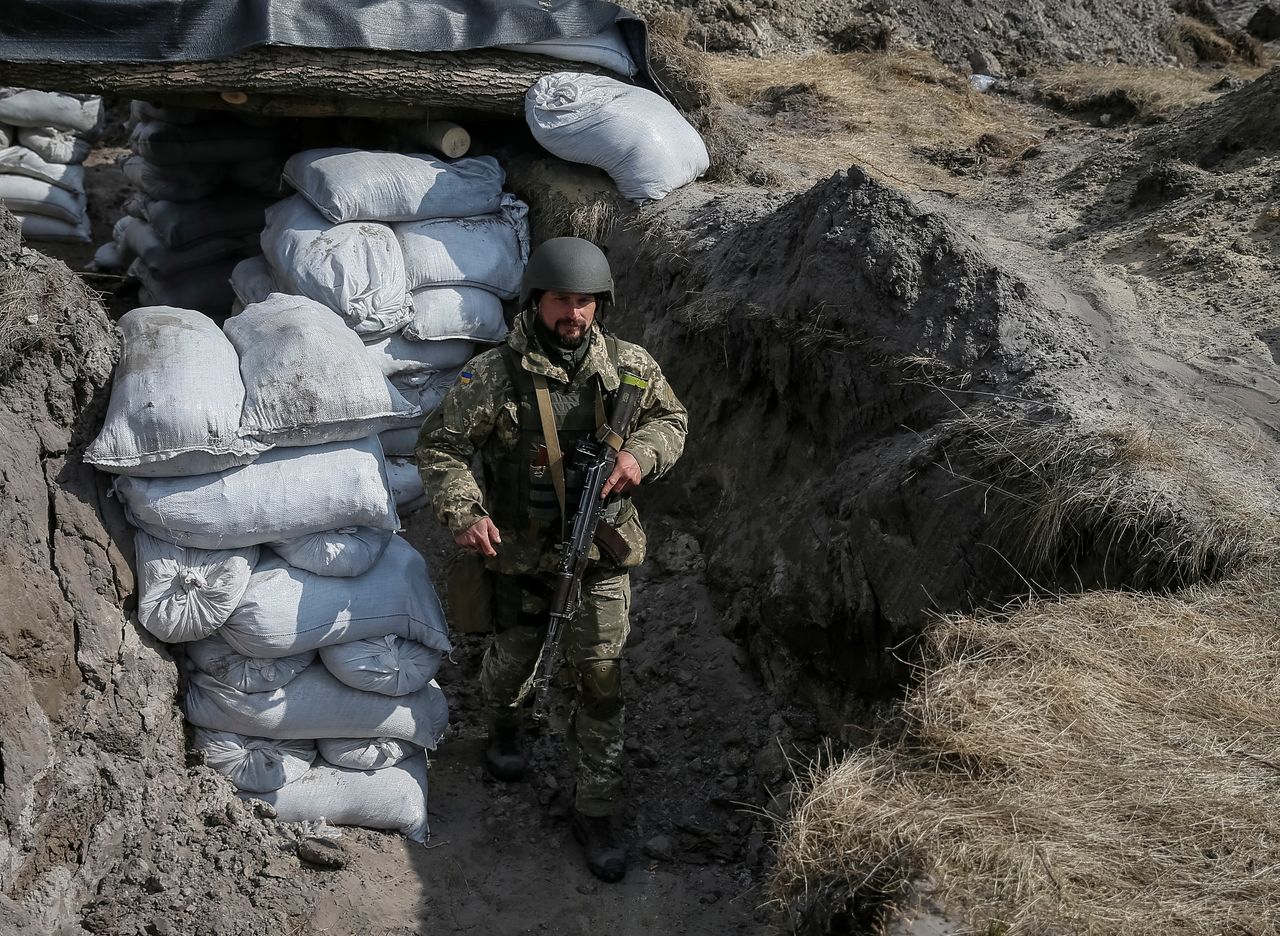 A Ukrainian service member stands at a position on the front line in the north Kyiv region, Ukraine March 24, 2022. REUTERS/Gleb Garanich