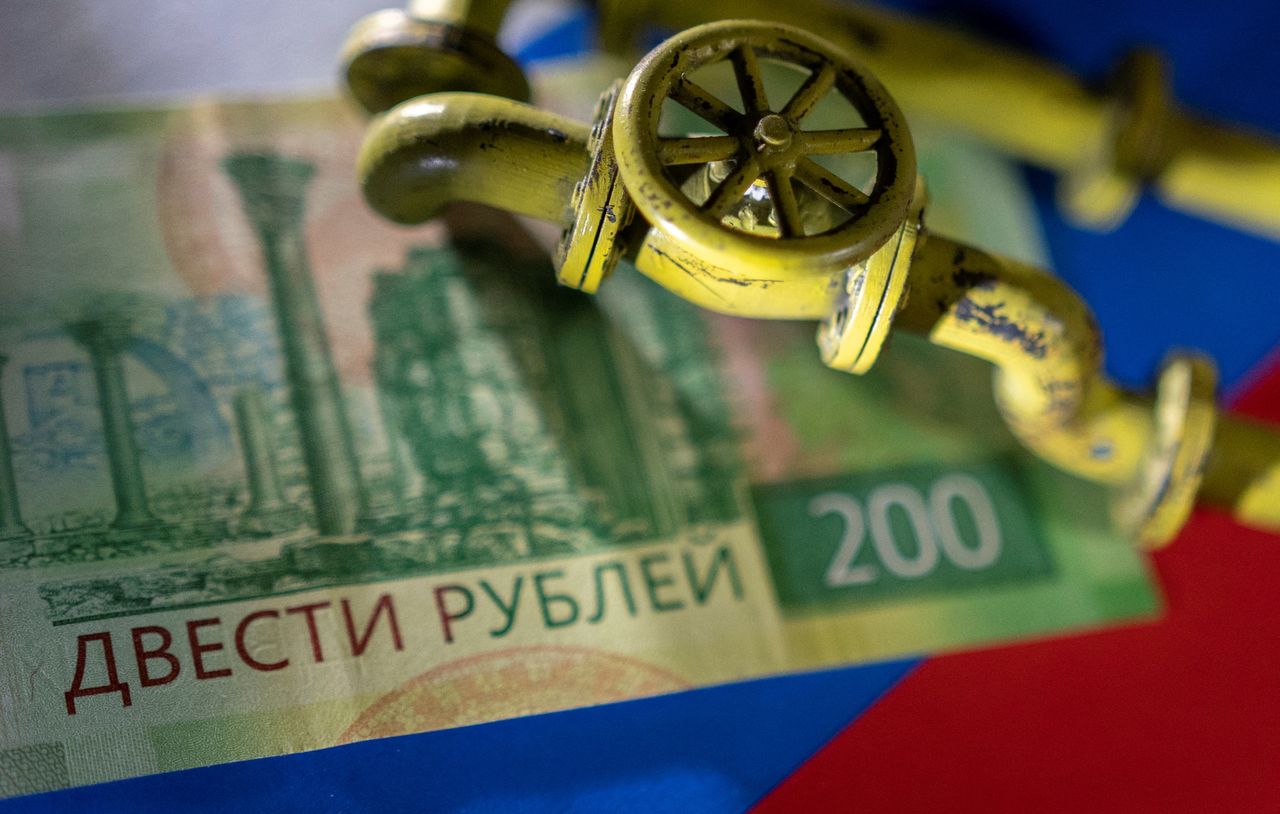 A model of the natural gas pipeline is placed on Russian Rouble banknote and a flag in this illustration taken, March 23, 2022. REUTERS/Dado Ruvic/Illustration

By Yuka Obayashi and Heekyong Yang

TOKYO (Reuters) - Asian importers of Russian gas were scrambling on Thursday after Russian President Vladimir Putin said "unfriendly" countries must pay for Russian gas in roubles, in the latest jolt to global energy markets after Moscow's invasion of Ukraine.

Japan, South Korea and Taiwan were on the list of countries deemed unfriendly. They all import liquefied natural gas (LNG) from the Sakhalin-2 and Yamal LNG projects in eastern Russia.

Putin said on Wednesday that Russia, which calls its actions in Ukraine a "special military operation", would continue to supply gas in volumes and prices fixed in contracts but would require payment in Russian roubles.

Japan, the biggest importer of Russian LNG in Asia, had no idea how Russia would enforce that requirement.

"Currently, we're looking into the situation with relevant ministries as we don't quite understand what (Russia's) intention is and how they would do this," Finance Minister Shunichi Suzuki said in parliament.

Japan imported 6.84 million tonnes of LNG from Russia in 2021, according to Refinitiv trade flow data, making up nearly 9% of its LNG imports.

JERA, Japan's biggest LNG buyer, has not received any notification from Sakhalin Energy, the joint venture that operates Sakhalin-2, to change the currency of payment from the U.S. dollar, a company spokesperson said. The spokesperson added that the country's biggest power generator will keep gathering information.

Tokyo Gas, one of Japan's largest LNG buyers, declined to comment on any details of its long-term contract for 1.1 million tpy with Sakhalin Energy, including what currency it can use for payment.

Sakhalin Energy is 50% owned by Russia's Gazprom, with Shell holding a 27.5% stake while the rest is held by Japan's trading companies Mitsui & Co and Mitsubishi Corp. Shell said on Feb. 28 that it would quit the project and the Japanese government has said Shell's exit did not impact Japan's energy imports.

Mitsui and Mitsubishi are checking details of the Russia's announcement, their spokesmen said.

South Korea, Asia's third-largest importer of Russian LNG, expected to be able to continue imports, with the country's Financial Services Commission saying it would do whatever was necessary to facilitate trade.

Korea Gas Corp (KOGAS) said it imports about 2 million tpy of Russian LNG, making up about 6% of the company's imports. However, KOGAS does not transact directly with Russia as its purchase contract is with Sakhalin Energy and payments for the gas go into a Japanese bank in Singapore, it added.

"Since we are making payments to that Japanese bank, we are not currently seeing issues now, but we are closely monitoring the development," a KOGAS official said.

Taiwan's economy ministry said state-owned CPC Corp has one gas shipment arriving from Russia at the end of this month.

It said they had received "no news that the payment system will be adjusted".

The call for payments in roubles was seen as Putin's way of trying to shore up the rouble, which has collapsed after the imposition of sanctions on Russia.

Putin said the government and central bank had one week to come up with a solution on moving operations into the Russian currency and that Gazprom would be ordered to make the corresponding changes to contracts.

However the move is unlikely to work for Moscow, said Eswar Prasad, a trade policy professor at Cornell University.

"Foreign importers would no doubt be happy to pay for their purchases of Russia's exports in a currency that is collapsing in value, although getting access to roubles in a manner that does not fall afoul of sanctions could be tricky," Prasad said.

Getting paid in roubles would do little to secure the hard currencies Russia needs to prop up its currency's value in global markets or pay for imports from other countries, he added.

(Reporting by reporting by Yuka Obayashi, Kantaro Komiya and Ritsuko Shimizu in Tokyo, Heekyong Yang and Joori Roh in Seoul, Jeanny Kao in Taipei and Arathy Somasekhar in Houston; Writing by Sonali Paul; Editing by Florence Tan and Gerry Doyle)