A month into war, communicator-in-chief Zelenskiy strives to keep eyes on Ukraine

LONDON/LVIV, Ukraine (Reuters) - The props were simple, the message was clear. In a video address to the nation this week, Ukrainian President Volodymyr Zelenskiy held up his smartphone to the camera and started a timer app while an air raid siren blared.

"It lasted 20 seconds," Zelenskiy said, after the wailing subsided. "And we hear it for hours, days, weeks. Our people... instantly take their children, help the elderly, and go to the shelters... to survive, from Russian missiles, bombs."

Sitting at his desk, unshaven and in his now trademark green shirt, Zelenskiy had in a few short sentences reminded 44 million Ukrainians that he was going through what they were, while renewing pressure on NATO to impose a no-fly zone.

While keeping the world engaged could get harder over time, for now that ability to communicate is making a difference.

His approval ratings at home have soared as Russia's invasion of Ukraine enters its second month, and he has rallied the nation around the flag as thousands of civilians take up arms.

Abroad he appears no less popular, as Western powers supply Ukraine with weapons and aid, take in millions of refugees and tighten sanctions around Russia.

For those who have worked closely with him, the 44-year-old's handling of the war so far is not totally surprising.

Iuliia Mendel, Zelenskiy's spokesperson during the first two years of his presidency from 2019-2021, told Reuters that the former actor put a lot of time and effort into his speeches. He is also quick to adapt.

"Now he can just take his telephone and make a selfie video, not caring much about the lighting and how he looks and that he has not shaved probably," she said.

The more informal setting brought him closer to people, "because when everybody is suffering so much it would be really strange if... he tries to look official."

Zelenskiy would often come up with a specific message or metaphor that he wanted to include in his addresses, according to Mendel, and looked for what would resonate most with a particular audience.

And so, as he hones his role as the face of Ukraine's resistance, he has used a mix of social media savvy, impassioned speeches and a virtual "tour" of the world's parliaments to try to prevent international outrage at Moscow from dissipating.

"He'll be aware that the world moves on. The world gets tired," Alastair Campbell, who was spokesman to former British Prime Minister Tony Blair, told Reuters.

"He knows that you've got to keep finding new ways to keep this thing right at the centre of the global public debate and on his terms. And I think that's what he's done very well so far, but it gets harder the longer you go on."

As the war drags on, Zelenskiy is tightening his control over messaging at home.

Under martial law, his security and defence council temporarily banned Russia-friendly political parties, one of which holds a sizeable number of seats in parliament and which has in the past accused him of silencing the opposition.

He has also effectively shut down private TV channels by unifying coverage around one state station.

Ukraine has had a varied media scene, although major TV channels were owned by business groups that promoted competing political interests.

Zelenskiy faced some criticism from political opponents before the war for imposing sanctions on TV channels connected to opposition figures.

One of his main modes of communication abroad has been to address national parliaments, from Washington to Tokyo, via video link from Kyiv.

Zelenskiy's message has sometimes been blunt.

In his address to the U.S. Congress, Zelenskiy played a video showing Russian bombs falling on Ukraine, grieving families, bloodied children on hospital beds and corpses on the streets and laid into graves.

His demand that NATO members impose a no-fly zone over Ukraine has been dismissed by some diplomats as impractical, because they say it risks dragging the alliance into direct confrontation with nuclear-armed Russia.

When addressing Israel's Knesset, Zelenskiy, who is Jewish and lost family members in the Holocaust, compared Russia's war to Nazi Germany's killings of Jews while asking Israel for its Iron Dome defence system to protect Ukrainian cities.

The reference sparked a backlash and the Israeli government did not accede to Ukraine's request.

On the eve of the one-month anniversary an impassioned Zelenskiy - speaking, unusually, in English - used his nightly video to bypass the world's political leaders and appeal directly to their people.

Casting the war as an existential battle not only for Ukraine but for Europe, he urged them to protest what he called Moscow's "war against freedom".

'SPEAKING FROM THE HEART'

For Campbell, Zelenskiy's "sense of authenticity" makes him an effective communicator.

"You really feel this is a guy who is speaking from the heart all the time, but without being too emotional," he said.

Addressing the Japanese National Diet on Wednesday, he referred to Ukraine's Chernobyl nuclear disaster and the prospect of Russia waging chemical warfare – resonant in Japan which suffered the Tokyo subway sarin attack in 1995 and the Fukushima nuclear disaster in 2011.

A former comedian who once played a fictional president in a popular TV series before entering politics, Zelenskiy has suddenly been thrust into a very different role.

When Reuters first interviewed him as a candidate in 2019, it was backstage at a comedy competition he was compering. Three years on, he spoke to Reuters in March in a city under attack, protected by armed soldiers in rooms dotted with sandbags.

But some elements of his messaging have remained constant.

Ever since he ran for president as a political outsider in 2019, Zelenskiy has used social media and videos to get through to voters using plain language.

Upon entering office, he took with him people from the TV and media world as officials and advisers. One of those close to him declined to comment when Reuters asked about his communications strategy.

A video in which he introduced his team early on in the conflict has been viewed nearly 15 million times on Instagram.

So far, Zelenskiy's messaging is working at home. According to the Rating research group, the president's approval rating in Ukraine has trebled to 91% from December, while 93% of Ukrainians believe they will win the war.

It has brought round Ukrainians like Tetiana Popova, a member of Ukraine's Council on Freedom of Speech and Protection of Journalists.

"He is what I would call an 'everyman' - this was his advantage from the very beginning," said Popova, who was a deputy minister under Zelenskiy's predecessor.

Popova recalls her house shaking from Russian shelling while her nine-year-old slept. In a panic, she sent her child into Poland and remained in Ukraine, and immediately felt calmer once she saw Zelenskiy speaking on television.

"I believed that we can, we will endure, we will succeed. This thought came to me because the President is in Kyiv."

Outgunned by a larger Russian army, Zelenskiy has struck a balance between persuading Western allies of the need to equip Ukraine's military with air defences and missiles while convincing Ukrainians that their country will win the war.

Such messaging – Ukraine is smaller and needs help but will also win - is reflected in posters and signs that have appeared on the streets of Lviv.

One reads "DAVID vs GOLIATH" above a map showing tiny defiant Ukraine and vast Russia, adding: "Do you remember what happened?" 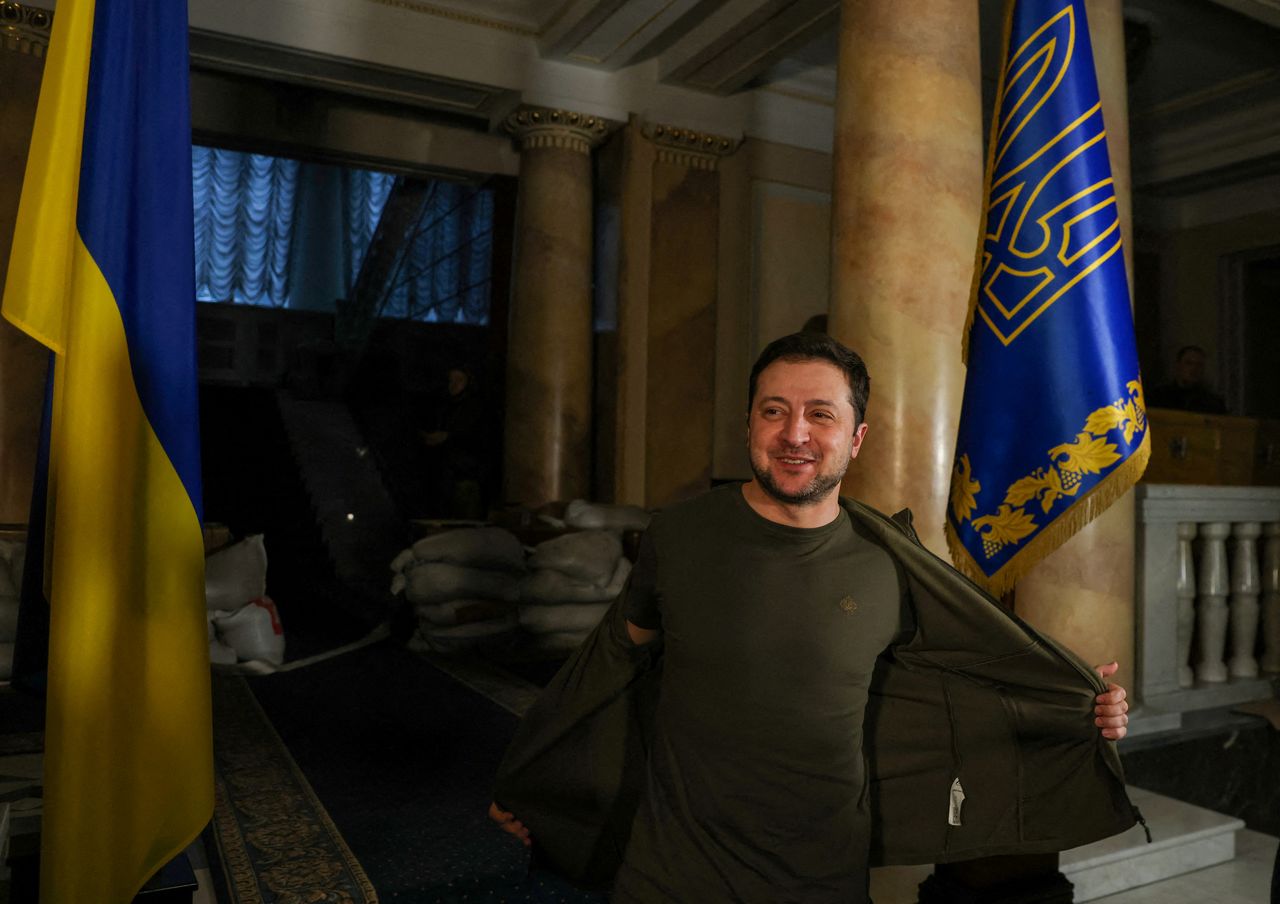 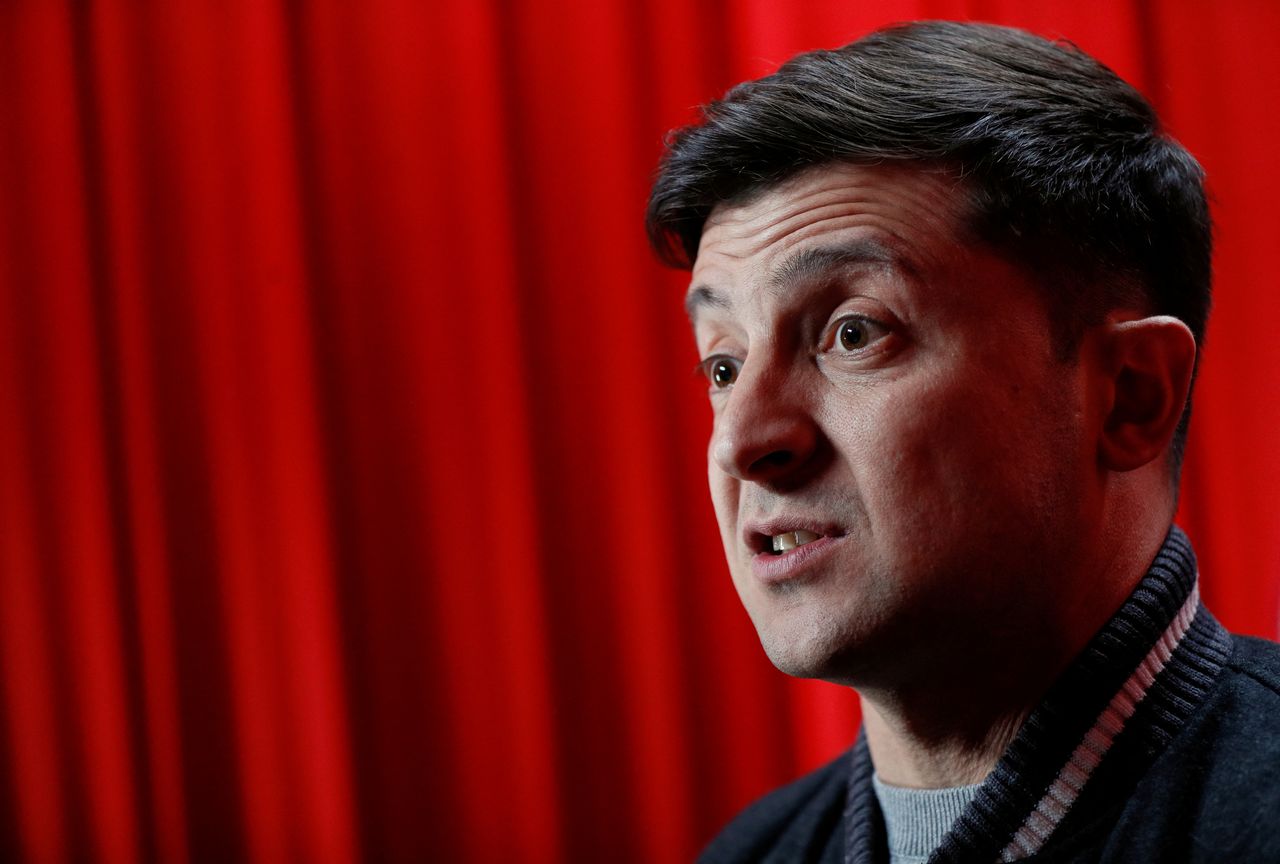 FILE PHOTO: Volodymyr Zelenskiy, Ukrainian actor and candidate in the upcoming presidential election, speaks during an interview with Reuters at a concert hall in Kiev, Ukraine February 22, 2019. REUTERS/Valentyn Ogirenko/File Photo