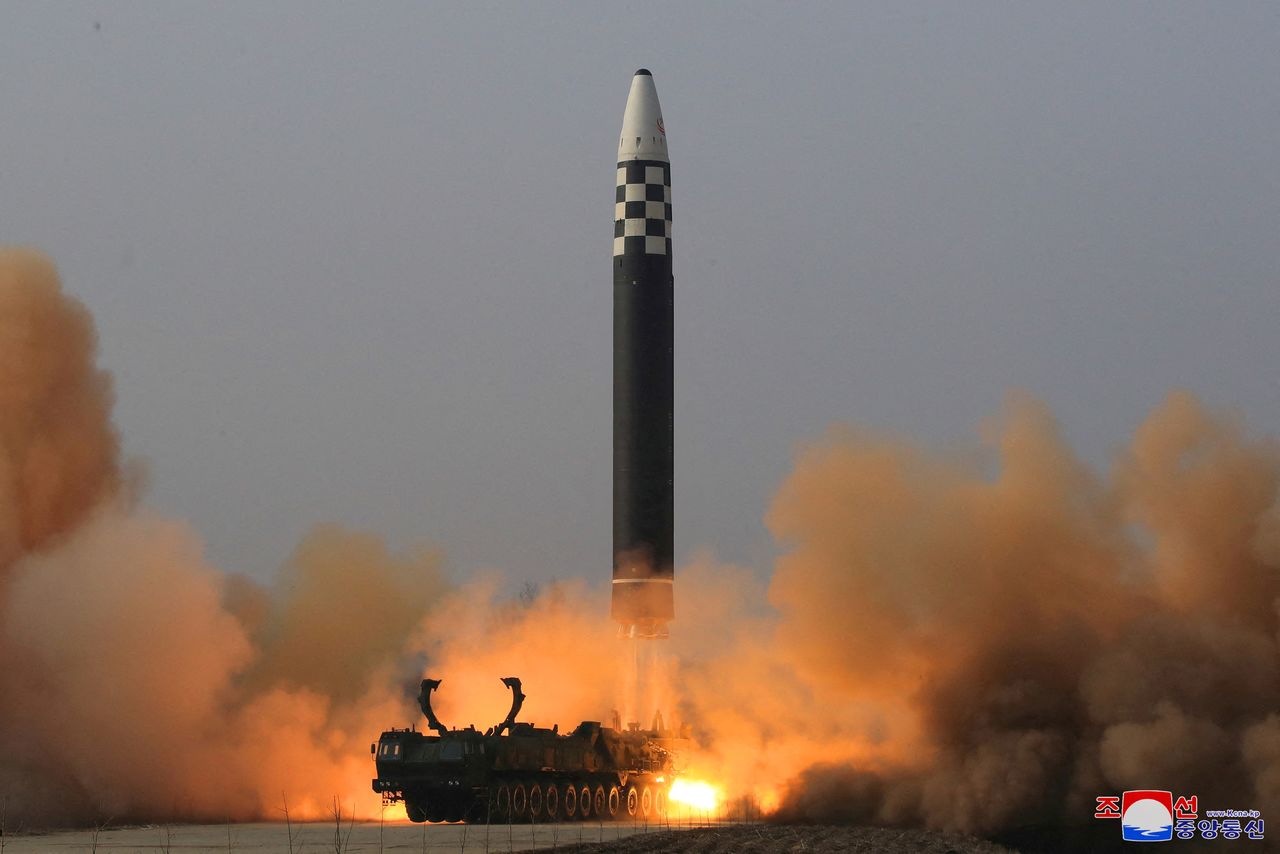 SEOUL (Reuters) - North Korea's resumption of long-range missile tests - including a flight of its largest-ever weapon - puts it closer than ever to having a reliable way of delivering multiple nuclear warheads anywhere in the United States, analysts say.

North Korea's latest launch was the Hwasong-17, a huge new intercontinental ballistic missile (ICBM), fired on Thursday in a test that leader Kim Jong Un said was designed to demonstrate the might of its nuclear force and deter any U.S. military moves.

It was the first full-scale ICBM test launch since 2017. There were two launches in February that U.S. officials said were preliminary tests of the Hwasong-17.

With a range that the Japanese government said probably exceeds 15,000 km (9,320 miles), the missile could strike targets anywhere in the world outside of a few countries in South America and parts of Antarctica.

That range - and its massive size - suggest North Korea plans to tip it with multiple warheads that could hit several targets or deploy decoys to confuse defenders, analysts say. North Korea's smaller Hwasong-15 ICBM, tested in 2017, can reach any part of the United States, but cannot carry as large of a payload.

"Since there aren't any good targets farther away, this missile is likely about carrying more weight — in the form of multiple nuclear warheads," said Melissa Hanham, a researcher at Stanford University's Center for International Security and Cooperation (CISAC) in California. "This makes U.S. ballistic missile defence even more difficult to achieve."

Along with other new weapons such as hypersonic missiles, smaller nuclear warheads, and drones, North Korean leader Kim Jong Un has made deployment of a 15,000km-range ICBM with multiple warheads a goal.

"The offensive arithmetic will be in their favour soon; they may be able to keep up with advances in American defences," said Ankit Panda, a senior fellow at the U.S.-based Carnegie Endowment for International Peace.

U.S. officials have predicted such advancements, and last year selected Lockheed Martin and Northrop Grumman to compete to build a Next Generation Interceptor (NGI) designed to shoot down missiles from "rogue nations" such as North Korea and Iran, said Thomas Karako, the director of the Missile Defense Project at the Center for Strategic and International Studies (CSIS).

South Korean president-elect Yoon Suk-yeol has vowed to boost missile defences to counter North Korean weapons, and has suggested that developing a preemptive strike capability may be the only way to prevent a missile attack.

The "lofted" tests North Korea has conducted, which send missiles high into space rather than far away, help confirm some elements of the system, such as full engine burns and staging. But other elements, such as accuracy and the survivability of the reentry vehicles that would carry a nuclear warhead, remain less verifiable in such tests, said Joseph Dempsey, a defence researcher at the International Institute for Strategic Studies.

"Typically there would be dozens of partial and full flight tests through a full spectrum of operational parameters before a system is accepted and mass produced for service," he said, noting that North Korea faces diplomatic and geographical constraints on long-range tests. "However, even limited successful tests can still provide enough minimal credible deterrence value."

For instance, lofted tests expose reentry vehicles to much more heat and stress than a normal attack trajectory, meaning they might not survive or perform as designed. North Korea said it fired Thursday's missile "in a vertical launch mode" to ensure the safety of neighbouring countries.

Rachel Minyoung Lee, with the Washington-based 38 North programme that monitors North Korea, said Pyongyang's goal seems to be to strengthen its leverage so it can turn denuclearization talks into nuclear-reduction talks.

"The message of the North Korean readout of yesterday’s ICBM launch is clear: North Korea will continue to develop its nuclear arsenal," she said.

A MISSILE THAT'S TOO BIG?

The Hwasong-17 had already been unveiled at military parades and defence expos, giving experts a good idea of what to expect.

Thursday's launch revealed for the first time, however, that the Hwasong-17 was launched directly from its massive transporter, erector, launcher (TEL) vehicle, which has 11 axles.

Previous North Korean ICBMs were transported and raised by such vehicles, but then usually fired from detachable platforms. TELs make it easer to conceal missiles until they are deployed for use, but Panda said the Hwasong-17 is so large there could be serious concerns about its operational practicality.

"There's a reason that no other country has ever decided to deploy a liquid-fuelled missile that’s this big on a road-mobile launcher: it’s unsafe and operationally unwieldy," Panda said, while noting North Korea seems to accept the risk. "A silo, which might make more sense for a missile this size, would be strategically worse for the North Koreans given its vulnerability to prompt preemption."

The next step for North Korea would be building solid-fuel missiles, which are more stable and can be launched with almost no warning or preparation time.