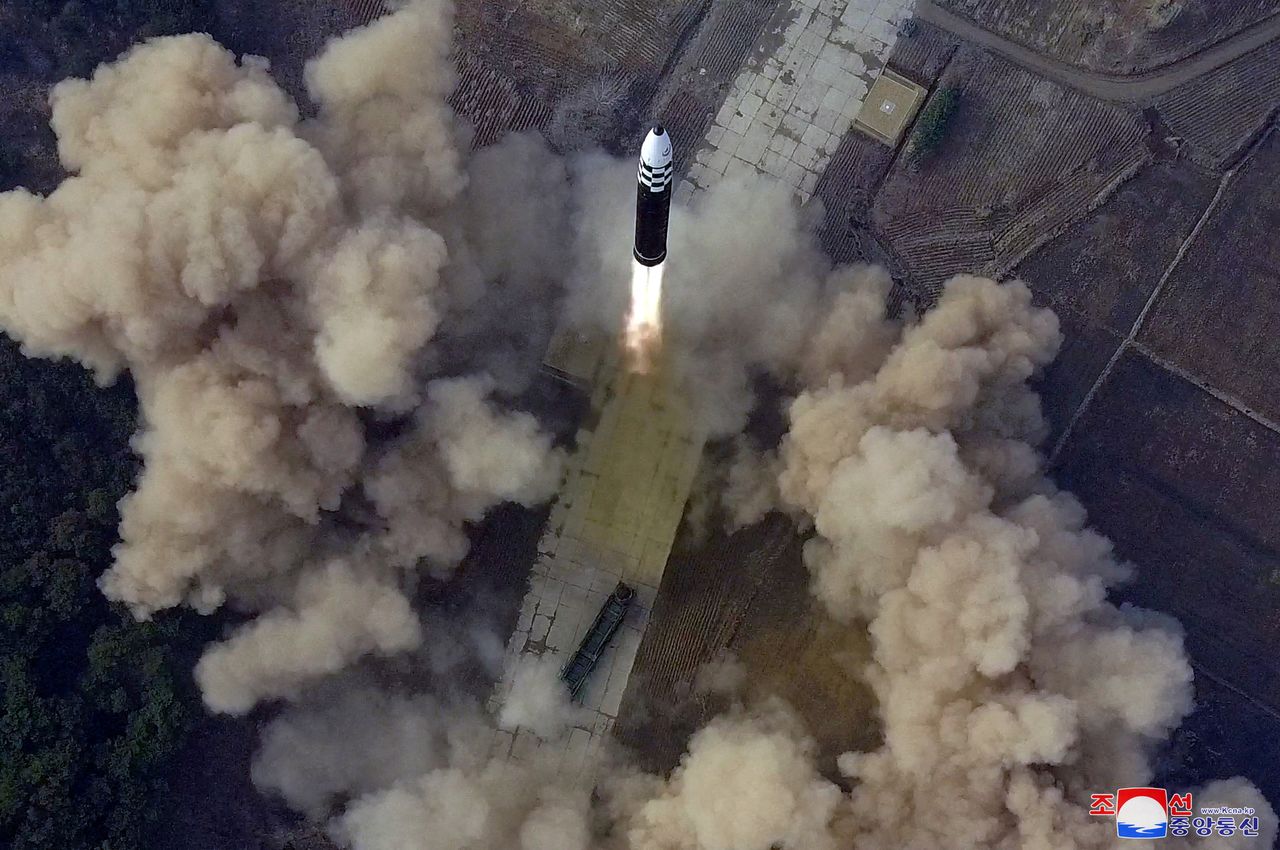 FILE PHOTO: An overview of what state media reports is the launch of the "Hwasong-17" intercontinental ballistic missile (ICBM) in this undated photo released on March 25, 2022 by North Korea's Korean Central News Agency (KCNA). KCNA via REUTERS/File Photo

SEOUL (Reuters) - Reports suggest North Korea's biggest missile test ever may not have been what it seemed, raising new questions over the secretive country's banned weapons programme.

North Korea said it had test-fired its new Hwasong-17 intercontinental ballistic missile (ICBM) on Thursday, the first test of a missile that size since 2017.

North Korean state media heralded the launch as an "unprecedented miracle", and South Korean and Japanese officials independently confirmed flight data that showed it flew higher and longer than any previous test.

But new details - including discrepancies spotted in the North's heavily stylized video featuring leader Kim Jong Un overseeing the launch in a leather jacket and sunglasses - have poked holes in Pyongyang's claims.

"The biggest question now is what was launched on March 24," said Colin Zwirko, a senior analytical correspondent with NK Pro, a Seoul-based website that monitors North Korea.

He has examined commercial satellite imagery and footage released by state media and he says discrepancies in weather, sunlight, and other factors suggest the launch shown by North Korea happened on another day.

"I've been able to determine that there's some sort of deception going on, but the question remains: did they test another Hwasong-17 and they're just not showing us, or did they test something else?" Zwirko said.

The U.S.-based James Martin Center for Nonproliferation Studies (CNS) concluded that some of the North Korean footage is most likely from a test on the morning of March 16 that South Korea said failed shortly after launch, exploding in midair over Pyongyang. North Korea never acknowledged that launch or a failure.

South Korea's Yonhap news agency has cited unnamed sources who said intelligence officials in Seoul and Washington believed that North Korea then tested a Hwasong-15 ICBM on Thursday, an older and slightly smaller type it had last launched in late 2017.

South Korea's defense ministry has not confirmed that conclusion. On Friday, a senior U.S. defense official, speaking on condition of anonymity, deflected when asked whether the latest launch was really the new missile.

"We know this is a test of a long-range ballistic missile and clearly they try to learn from each of these tests to try to develop their capability further," the official said. "But I am going to refrain from talking about it too specifically as we're still analyzing our own intelligence on it."

North Korea has a history of doctoring footage or reusing old images, but it would be "a whole new level" if they were lying about the successful test of a major new weapon such as the Hwasong-17, Zwirko said. North Korea has not responded to any outside reports that the launch may have been deceptive.

"I think it's likely that the March 16 launch was meant to have been the inaugural launch of the Hwasong-17, but it failed shortly after ignition," said Ankit Panda, a senior fellow at the U.S.-based Carnegie Endowment for International Peace. "This left the North Koreans with sufficient video footage and imagery to build a propaganda narrative after the March 24 launch succeeded."

The March 24 missile may have featured a light payload, or none at all, to achieve a higher altitude and longer flight time than the 2017 Hwasong-15 test, he added.

"The North Korean state media report included specific numbers on how high and far the missile flew, suggesting that there was an intent to engineer a launch that would look like a larger missile than the Hwasong-15, even if it wasn't," Panda said.

Hong Min, director of North Korean Research Division of Korea Institute for National Unification in Seoul, said no matter which ICBM was tested, North Korea has proved it can launch missiles that can strike the far side of the planet.

"We will need to check thoroughly if the video was fabricated, but it’s not like the threat is reduced at all," Hong said.

(Reporting by Josh Smith; Additional reporting by Phil Stewart in Washington and Heejung Jung in Seoul. Editing by Gerry Doyle)