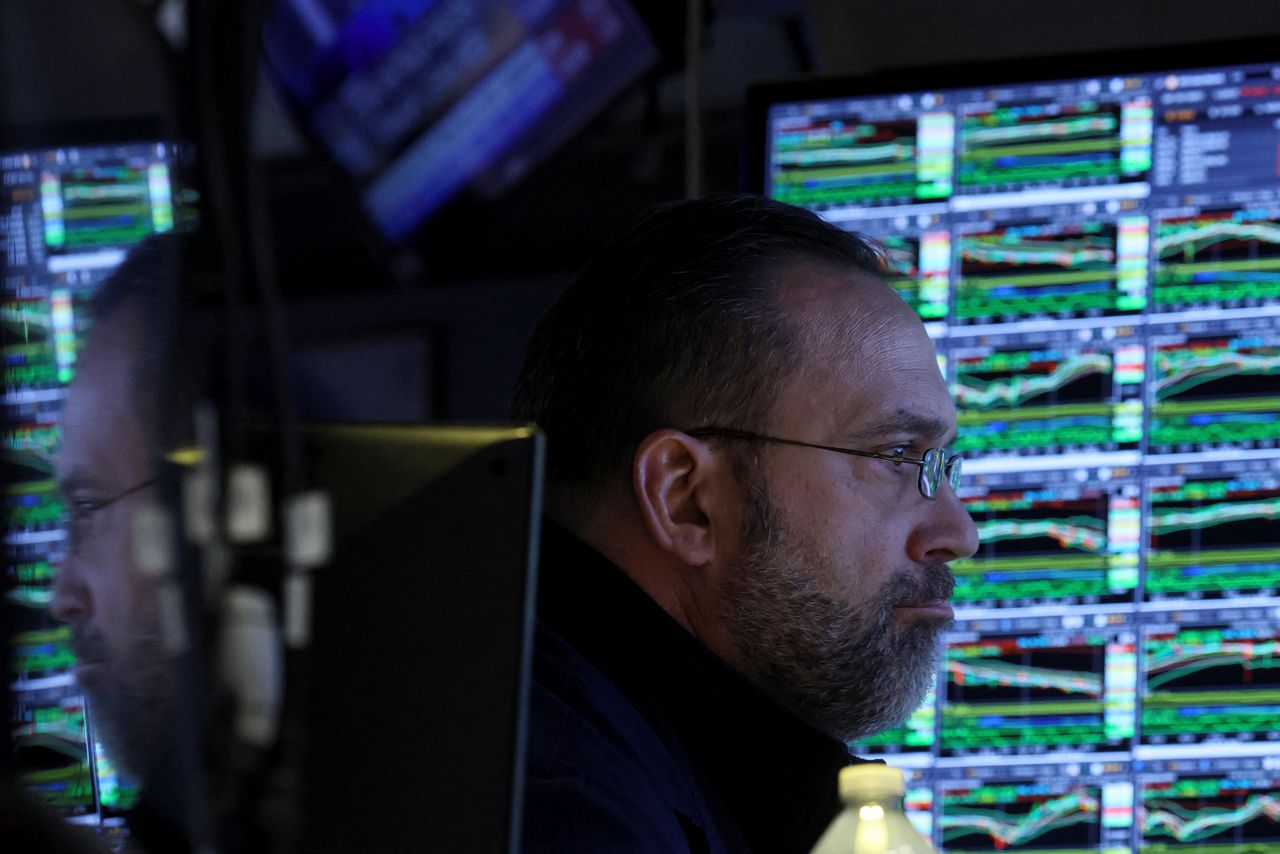 A specialist trader works inside his post on the floor of the New York Stock Exchange (NYSE) in New York City, U.S., March 10, 2022. REUTERS/Brendan McDermid

LONDON (Reuters) - Investors had hoped 2022 would be the year when the market recovery from COVID-19 finally got cemented and life started to feel a little more normal. Boy were they wrong.

Russia's invasion of Ukraine combined with supercharged global inflation have ignited talk of new geopolitical and economic world orders, setting some staggering milestones in the process.

A $10 trillion wipeout in world stocks followed by a $9 trillion recovery; a rout in bond markets; what is shaping up to be the strongest commodities rally since World War I; and the fastest rise in global interest rates in decades.

Add to that the world's largest country being gouged out the global financial system, the biggest sovereign credit rating downgrade ever seen and pastings for Japan's yen and Chinese stocks and the full picture becomes clear.

"It has been one of the most extraordinary quarters I can remember," said Close Brothers Asset Management's Chief Investment Officer Robert Alster. "...We all didn't believe that Russia was going to invade Ukraine."

However, the shocks far earlier than that, he noted. Investors suddenly grasped that the new Omicron COVID strain wasn't going to shutter the global economy, and that the world's most influential central bank, the U.S. Federal Reserve, was now serious about jacking up interest rates.

The main driver of global borrowing costs, the 10-year Treasury yield, leapt from under 1.5% to 1.8%, knocking 5% off MSCI's world stocks index in January alone.

Fast forward to now and that yield is at 2.4%, and two-year U.S. yields have seen their biggest quarterly surge since 1981. More than 200 basis points of Fed interest rate rises are also now expected this year which, if realised, would be the most in a calendar year since 1994.

The top global stock markets will end March higher, but they are all set to record their worst quarter since the coronavirus pandemic first wreaked havoc in 2020.

Those seismic shifts have come as oil and gas prices have raced up 40%.

Added to the 57% surge in nickel and a 31% jump in wheat prices, which have both been driven higher by the Ukraine war, and BofA's analysts estimate commodities are on course for their best year since 1915.

That "special military operation', as Moscow terms it, has seen Russia hit with unprecedented Western sanctions and led to some of the world's biggest investment funds talking about a new world order.

Russian companies that had shares listed in London and New York have had them removed, the rouble can't be freely traded anymore and the country's government and corporate bonds have been all been ejected from the major investment indexes.

President Vladimir Putin has retaliated by saying "unfriendly" places like Europe, where Germany gets more than half its gas from Russia, will have to start paying for the stuff in roubles.

A broader spillover has sent waves through emerging markets, ripping into vulnerable ones but boosting others.

Egypt, which proportionally imports more wheat than any other country, has been forced to devalue its currency 15% and ask the IMF for help, as have Tunisia and a long-resistant Sri Lanka.

Emerging market debt is having the second worst quarter on record, down nearly 10% on a total return basis, with only the 13.3% COVID-induced plunge of the first quarter of 2020 registering worse.

Commodities heavyweights such as Brazil and South Africa meanwhile have the best performing currencies in the world, up 17% and 10% respectively since the start of the year, and Australia's dollar is top out of the advanced economies.

"This is a tectonic shift from a geopolitical point of view," Amundi's Head of Multi-Asset strategies, Francesco Sandrini, said.

"No one could have imagined that an entire new world order of energy should have been considered." he added. "Perhaps we are talking about literally the unwinding of globalisation."

This week has also seen a dreaded - albeit brief - "inversion" of a key bit of the U.S. bond yield curve that has been a precursor of economic recessions.

It is the first time that has happened since 2019, while the broader rise in global yields means that the $18 trillion pile of negative-yielding bonds that existed a few years ago - where investors paid for the privilege of lending - is now almost gone.

There has also been a 9% drop in Japan's 'safe-haven' yen versus the dollar this month, the biggest plunge by a G10 currency since the pound's Brexit beating of 2016.

The yen's slightly smaller 6% quarterly fall and a 2% drop by the euro means the dollar will score its third straight quarterly rise against its major peers, although it is actually down against emerging market units despite the anxiety caused by events in Ukraine.

The rouble lost nearly half its value in the immediate aftermath of the Ukraine invasion, but tight capital controls and central bank interventions since have left it down a more manageable 15% for the year.

Morgan Stanley's veteran Head of Asia Macro Strategy, Min Dai, has been left dazed by it all. "For someone who has been following EM for most of my career, what happened in the past month is beyond belief," he said.

(Additional reporting by Saikat Chatterjee and Dhara Ranasinghe in London)