By Tina Bellon and Joseph White

(Reuters) -Automakers racing to develop battery-powered, software-driven vehicles to compete with Tesla Inc are confronting a new challenge: what technology to build themselves, and what to keep buying from suppliers.

Becoming more vertically integrated by doing more manufacturing in-house represents a major shift for most global automakers, who have relied for decades on suppliers to produce critical parts and software, and manage sprawling manufacturing networks in low-wage countries.

But some established automakers are embracing drastic changes to their longstanding build-or-buy calculations. One factor is the success of Tesla's electric vehicles, which rely on proprietary technology the company develops and manufactures itself. Another is the financial damage done by supply-chain breakdowns during the pandemic.

"The most important thing is we vertically integrate. Henry Ford ... was right," Ford Motor Co's CEO, Jim Farley, said at a conference in earlier this month. Farley's reference was to company founder Henry Ford's Rouge manufacturing complex in Dearborn, Michigan, which in the early 20th Century took in iron ore and other raw materials at one end, and churned Model Ts off the assembly line at the other.

Farley said the company had to move away from its early EV strategy of buying components off the shelf. Now, he said, Ford aims to control the supply chains "all the way back to the mines" that produce battery materials.

"We are going deep into sourcing," Mercedes-Benz Chief Executive Ola Kaellenius told reporters during a briefing in Alabama.

The investments by automakers in mines, motors and batteries are a departure from decades of handing control over development and production to suppliers, who could produce steering controls, semiconductors and electronic components at greater scale and lower cost for multiple vehicle manufacturers.

In the new world of electric vehicles, however, investors have decided that Tesla's approach of buying raw materials directly, building its own batteries and engineering its own software is the winning strategy. Tesla's market capitalization has soared back above $1 trillion in recent weeks, outweighing that of Toyota Motor Corp, Volkswagen, GM and Ford combined.

"Major players have realized electric vehicles are the future, but they have yet to widely recognize that they have to up their game in terms of motors, transmissions, battery technologies, inverters and electric powertrains," Peter Rawlinson, CEO of EV startup Lucid Group Inc, said in an interview with Reuters. Rawlinson previously was vice president of vehicle engineering at Tesla.

Between the 1970s and the 2010s, the share of automaker-owned intellectual property in their vehicles decreased from 90% to 50%, according to Guidehouse Insights analyst Sam Abuelsamid.

That meant many automakers lacked the in-house engineering expertise to develop their own electric vehicle platforms, powertrains and battery packs when EV pioneer Tesla showed its vertically integrated cars were a hit with consumers.

"We're designing and building so much more of the car than other OEMs who will largely go to the traditional supply base and [execute] like I call it, catalog engineering," Tesla CEO Elon Musk said during a 2020 earnings call.

Tesla's approach is costly and the company has raised vehicle prices repeatedly in the last few years. Despite promising to deliver a model that could start at about $25,000, Musk earlier this year said "we're not currently working on the $25,000 car. At some point, we will. But we have enough on our plate right now."

There is also a gap between what automakers say about their vertical integration strategies, and what happens as engineers try to meet deadlines to deliver new vehicles, supplier industry executives said.

"There's a lot of narrative about in-sourcing and vertically integrating, especially in areas like software," Kevin Clark, chief executive of auto supplier Aptiv Plc, told analysts in February. "Virtually all the OEMs that we are doing business with are struggling with software development."

"There are a number of automakers who in a way want to continue buying and manage the final integration," Mosquet said, adding that it would take several years to determine which approach is successful.

Many automakers are also hesitant to completely in-source EV manufacturing at a time when EV purchases still make up only a fraction of total vehicle demand.

Other carmakers, including Mercedes-Benz Group, Ford and Porsche, are using electric motors by suppliers for their current EV models.

"The electric powertrain cannot be bought off the shelf at a world-class standard, it is not a commodity," Rawlinson said. "This is a technology race and the market doesn't see it yet."

(Reporting by Tina Bellon in Austin, Texas, and Joseph White in DetroitAdditional reporting by Ben Klayman in DetroitEditing by Matthew Lewis) 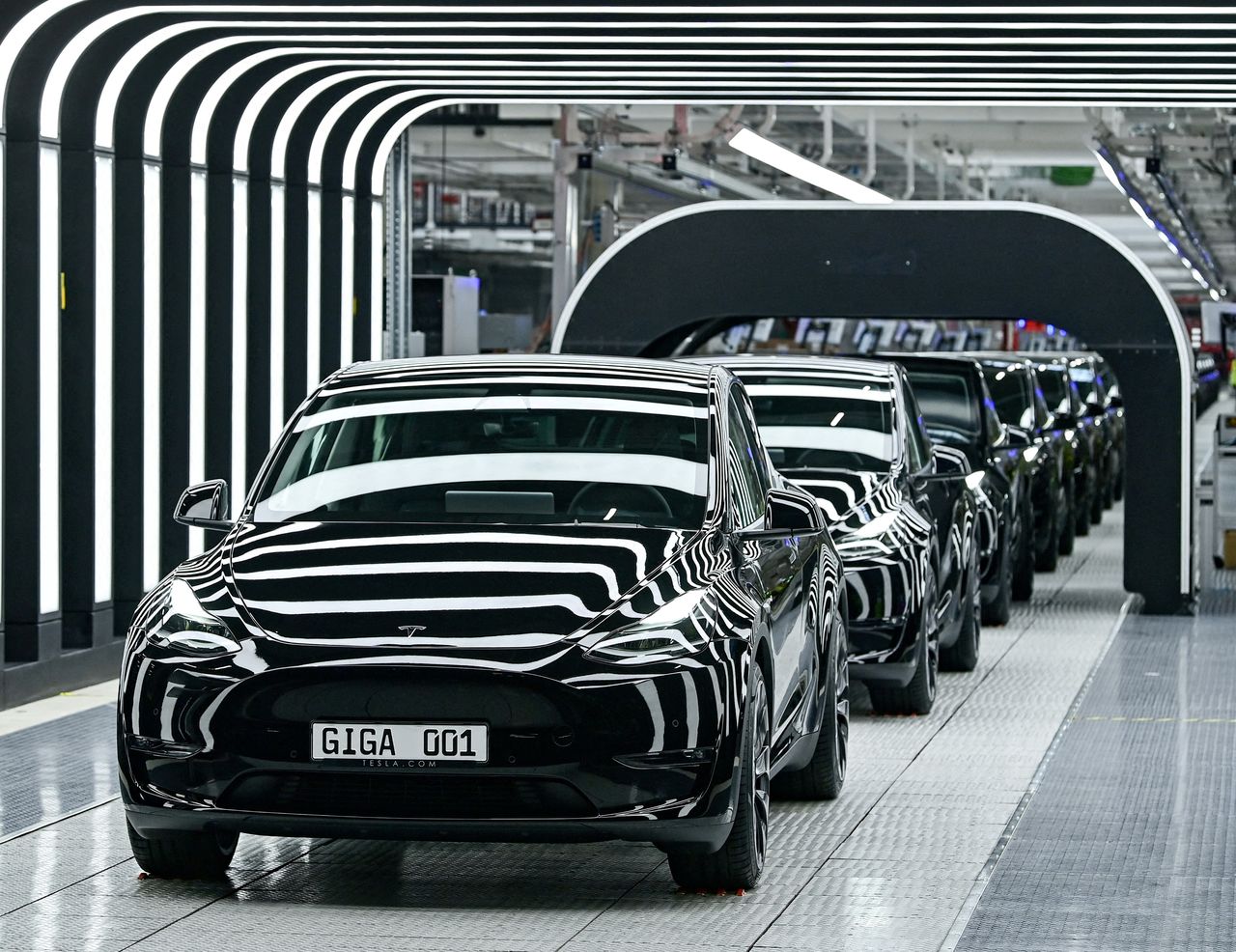 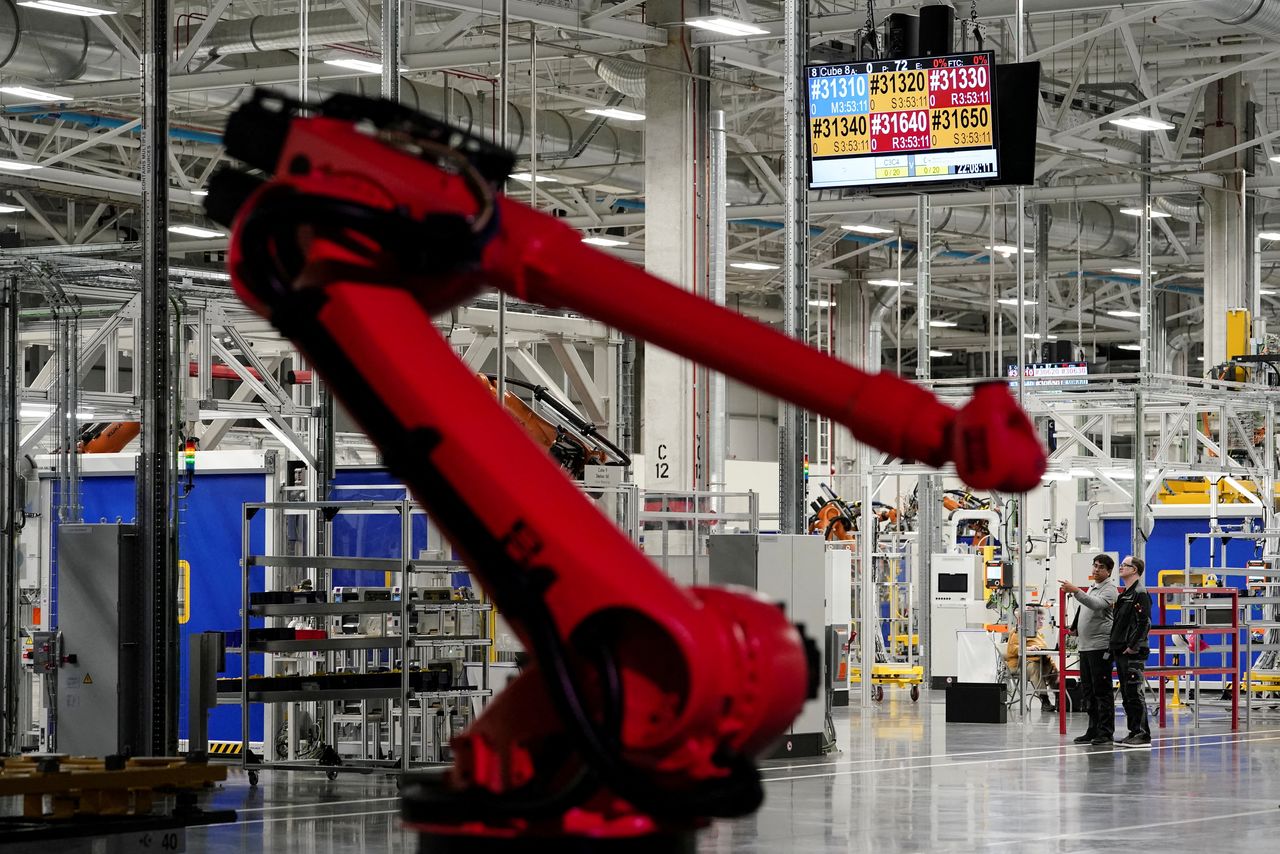 FILE PHOTO: People are seen on the manufacturing floor at the opening of a Mercedes-Benz electric vehicle Battery Factory, marking one of only seven locations producing batteries for their fully electric Mercedes-EQ models, in Woodstock, Alabama, U.S., March 15, 2022. REUTERS/Elijah Nouvelage/File Photo